It glows most beautifully. Really.

"Do you want to go to New Jersey for a burger? Have you ever been to White Manna? It's close to my parent's house."

I thought Dan was kidding when he asked me that while hanging out in his Williamsburg apartment. Of course I wanted to go to White Manna; anyone who knows their burgers knows about White Manna. But I'm ashamed to admit that, despite growing up in Northern New Jersey, it took 23 years for me to actually make my way over there—and not even when I was living in New Jersey. As much as I had to get the White Manna experience under my belt, we certainly couldn't just go to small burger joint in New Jersey on a whim on a Thursday night from Brooklyn. It's like...sort of far, last time I checked.

And then I found out that Dan had a car. Ohh. Well, if I'm not driving, then hell yes.

I, along with Dan's roommate and another friend from out of town, hopped into the car as Dan took us to a magical land across the George Washington Bridge. That land? Hackensack, home to White Manna, a relic of the 1940s and, as far as I can tell, the most historically significant burger joint in the Garden State (along with White Mana, the similar burger joint in Jersey City, which is older but I heard not as tasty). The wee art deco diner looks like something out of a movie set, but there it is, plopped in the middle of Jersey suburbia. It's a breath of fresh air. Not literally.

"You're going to reek of meat after we're done," Dan warned us.

As soon as I reached the entrance, the fumes hit me: meat and onions. Beautiful. If we hadn't arrived there at 10 p.m., it may have been harder for all of us to sit around the U-shaped counter. But it was bustling even at that hour, although probably with locals and not four random Brooklynites. There were only two guys behind the counter. One was in charge of making all the burgers and the other was in charge of all the other stuff. Although on retrospect, I'm not sure if he was taking orders; he may have just told us to directly tell the cook what we wanted. What should you order at White Manna? To my then-naive mind, sliders were tiny things. Methinks White Castle had too much of an influence on me because I felt like slider portion sizes should be counted in sacks. White Manna may make small burgers, but they're far from bite-sized.

When Dan said he could eat five (or was it more?) burgers in one sitting, I thought, "Well, I generally eat more food than a normal human being should; maybe that means I can eat four of them." I changed my mind when his other friend ordered a reasonable two burgers. I went for three single cheeseburgers, not realizing that just because a cheeseburger is $1.30 ($1.30!!) that meant it was diminutive. Three was one too many, but I'd find that out later, mostly in the pit of my intestinal tract for the rest of the night. The burger assembly process is quite simple. Place rows of fresh meat plops on the griddle. After a while, smush em down and add a liberal coating of thinly sliced onions that will melt into glorious sweet, semi-translucent mounds. Is it burger time yet?

After another while, flip the patties over and add cheese. Stack the bottom potato bun and top bun on the patty. When it's ready to go, take off the top bun, flip the rest over, crown the burger with the top bun, and... OH MY GOD YES, BURGERS ARE READY, IN MY MOUTH THEY GO. (Along with complimentary pickles.) 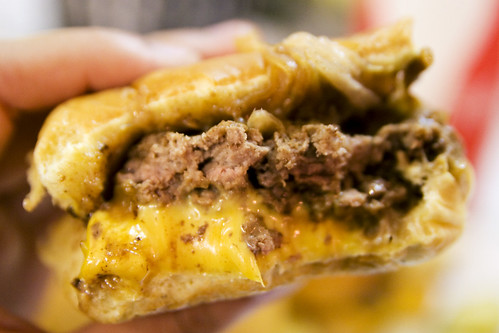 And then they went. The bun was perfectly soft and squishy like a good potato roll is (it's my favorite burger bun by far), the meat was moist and fatty, and the onions and cheese gave the burger that welcome hit of sweetness and gooeyness. The proportions were just right for my tastes.

But. But. (I hate to have a but.) The meat was not seasoned. (I asked the guys behind the counter to confirm.) There was no salt. And while I guess that's what the ketchup was for, I really, really wish there had been salt in the patty. Bland meat isn't your friend. Of course, it tasted good, but it didn't reach its life-changing-burger potential. Everything was in place except for the sodium content. 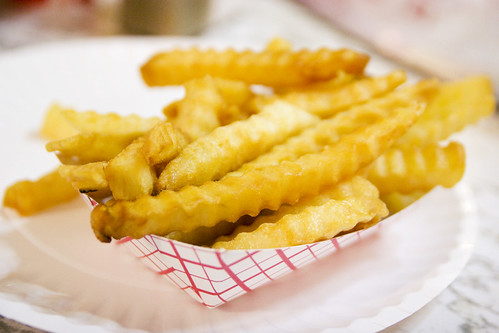 There were also fries. Durh.

I'd eat it again though, given the chance. It's the experience of eating the burger in such an awesome environment that makes it special. Even though I realized I was food coma-full after the second burger, I persevered—probably with a bit of heavy breathing and unfocused vision—until the third burger completely made its way into my belly. I paid the price by carry a dull brick-like feeling in my belly for the rest of the night while internally moaning, "Oh god why the fuck did I do thaaaaat," but it was worth it.

Dan ordered some burgers to-go as a surprise for his parents. What a nice son. I hope one day my progeny will unexpectedly show up at my doorstep after 10:30 p.m. wielding burgers.

When I got home and sniffed my clothing far from the influence of other people who had been White Manna-ed, I realized how much I reeked of meat and onions. 'Tis the badge of a successful burger night.

Thanks so much to Dan for driving me home. I'm not sure I could've forced much movement out of my body by that point.

Is this restaurant the same as in the movie harold and kumar ?

I've eaten there since I was a kid and my friend's father was the owner. When I worked as a garbage man for the City of Hackensack I ate there almost every day. If they salted the burgers you would bloat up too fast and not be able to eat more than three of them. The cheese and onions almost overwhelm the bruger as it is. Now that I live in Budapest, I've tried making these at home but it never comes out right without good beef and potato rolls.

Across the street is a multiethnic "farmer's" market that sells frozen guinea pig meat. I love Hackensack.

Wow, how unusual for a place to not season their patties. I guess it is good to leave it up to the customer, which would be good for me since I maintain a low salt tolerance. But, there isn't really a way to get the salt IN the patty... Still, they look like good wholesome burgers with good ingredients :)

Aw! Thanks Robyn. Glad you had a fun time.

For those interested in making them at home, they're using a fairly fatty ground beef, probably 15-20% fat content.

The buns are Martin's brand potato rolls. The cheese, I'm nearly 100% sure, is Land-o-lakes American. And they use white onions sliced paper thin.

I think one of the things going for them is the seasoned griddle, which I doubt is rarely cleaned. So, if you're interested in replicating these little gems in your home, It's possible, but it might take making them every day for 2 months first.

Great write up. I can totally relate. I've never been to the Hackensack location but I LOVE the JC one http://bit.ly/3S59uj

Mac: I think you're thinking of the burger chain White Castle...?

dumneazu: (I LOVE YOUR BLOG!)

I still want saaalt, noooo. I will endure the bloat! Oh well. The cheese and onions were not enough for my taste buds. Sniff.

SuperChomp: Yeah, I would prefer salt in the patty and not just on it. But for the salt conscious...I guesss it's good. :)

Dan: Thanks for the info! And for the burgerz.

Rev: I once drove by the JC one after just having attended a pork-heavy bbq. So tempting, but I just couldn't do it. :( Maybe another time...

ooof. I am so hungry right now. you are a wonderful person.

ahhh you tried white manna! this has been on my to-go list for quite some time. thanks for the heads up on the number of burgers you ordered. i probably would have been tempted to order 3 myself =D

I don't eat meat, but I think I really appreciate that the chef doesn't add salt to the meat since I too have low salt tolerance. I think the chef probably wants the diners to taste the true meat flavor. I love to support local joints like this. yea, there's always Shake Shack, but I'm more of an elbow on the table gal. :)

Pair this with a trip to Bowler City around the corner and you have a perfect day!

White Mana is the pride of our City! I'm glad you got a chance to experience it. That place has been a stop for our family, after the kids hockey games at the Ice House, down the street, no matter the time of day! I hope you were also able to try the fries and the shakes. Their fries are great and the shakes are the best around!

The only down side is if you do stop there without the family, you cannot lie about it when you get home. The aroma adheres to you and your clothes for hours! Great stuff!

I do prefer "our" White Mana, over the JC one. Their burgers were a little more traditional in my opinion.

Jeff: I like that my burger-eating makes me wonderful. THANKS!

Grace: I hope you like it! And that your digestive system isn't too unhappy afterward.

Kim: I love Shake Shack cos it's all good and salty! :) But I could see why a place like this is nice for those who can't eat much salt (not that I think that's why they don't salt the meat..hm.)

hmcnally: Oh poop, I didn't know there was a bowling alley. Maybe another time!

Damian: Damn, if only I had grown up closer to Hackensack! (I grew up in Franklin lakes...boring.) Alas, forgot to try the shake, but my stomach prolly would've exploded if I had...so maybe it's good I forgot. :[

I don't feel bad about missing out on JC, haha.

Hello, thanks for writing about White Manna. The HQ of the company I work with is at NJ. Now I know where to go during my next trip there :-)... oh, I am so tickled by your admission to 'without photoshop, I am nothing', I too rely on photoshop...

Did they let you behind the counter, or were your macro shots courtesy of a great lens?

Shirley: I hope you make it to White Manna!

Jason: I went behind the counter. :)

Looks like a truck driver spot. Is it full of rednecks?