After watching the great yearly American face-stuffing tradition that is Nathan's Hot Dog Eating Contest on July 4th at Coney Island, I met up with Veronica and her sister Kelly for a leisurely stroll down the boardwalk, culminating in some fooding in Brighton Beach. Having failed to do any research, I led us to two places I had already been to. Not that there's anything wrong with that since they're both awesome. First stop: Russian-Ukrainian restaurant Cafe Glechik. First dish: assorted pickles. My favorite is the watermelon, whose texture becomes more substantial through the magic of vinegar-and-other-stuff infusion and whose flavor becomes saturated in sweet and sour goodness while still retaining a hint of watermelon-ness. The platter also has pickled cukes and pickles tomatoes. Next was a super refreshing cold borscht. It's not a soup I would usually choose, but that's probably because I haven't had this version before. Unlike other borscht I've had, this one was creamy and featured lots of chopped up bits of...stuff. Beets, onions, dill, celery, and maybe apple (there was something sweet in it). I can't imagine going to Cafe Glechik without ordering some of their delicate, bite-sized, wonton-like dumplings, vareneki and pemleni. We tried the vareniki with cabbage and the pelmeni Siberian, which I think is a mixture of veal and chicken. Whatever it was, the pelmeni burst with juicy and meaty multi-species goodness. The slightly sweet cabbage vareniki were fine too as a complement to the meat dumplings, but if I could only pick one, I'd go for the meat. Everything was made better with a slathering of complimentary sour cream. For dessert, we went to M & I International Food, home of the infamous best carrot cake ever. With the intention of getting a piece the same size as last year's, I confidently pointed to a plastic container behind the counter and asked, "Could I have a piece that will fill that container?" The entire remaining cake slab ended up being just the right size for the container. It wasn't until I got a closer look at the cake and felt its heft that I realized it was about three times larger than the last one. Ooooops. 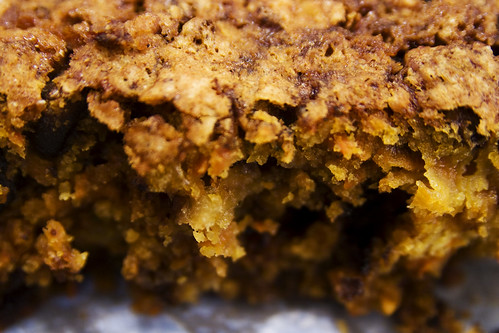 Veronica, Kelly, and I picked away at the crispy-topped craggly cake slab stuffed with shredded carrot, raisins, walnuts, chunks of dried pineapple, and then some, along with moist golden cake matter. We didn't get very far. I ended up donating the rest to Kathy and her boyfriend when we met up later that night for gelato. I can always count on her to eat my leftover pastries (although, to be fair, her boyfriend ate most of it). And there was this.

We also tried a slice of this cake made of three walnut-studded, slightly chewy meringue-esque layers held together with custard. Interesting. Better than not bad, although not necessarily I'd want to eat again.

The carrot cake looks very different from ones from the bakery. It doesn't 'look' appeticing, but it seems like many people really enjoy it. Can't judge a book by its cover, right? :) Too bad Brighton Beach is so far from where I'm from.

I only got a small slice of carrot cake my first time cuz I was worried I wouldn't like it, but later I totally regretted it. Seriously, we need a M&I in Manhattan.

Thank God you went back for the carrot cake!!!! I have been dreaming of this for over a year. Now, the really important question: did you ask for the recipe or how they make it??

Wow, that borscht is unusual. I always find I'm vaguely disappointed by any beetroot that isn't pickled though... I LOVE pickled things.

kim: Yup, it definitely tastes better than it looks. It doesn't need to look pretty when it tastes SO AWESOME.

bionicgrrrl: Specifically, WE NEED THE CARROT CAKE IN MANHATTAN!! :) I mean, the rest of the market is cool too. Yeah.

Laurene: Ahh you're gonna hate me..nope, I didn't ask. I bought it and then shoved it into mah face, mmm.

I've always meant to go to Cafe Glechik...now you've renewed my desire! Those dumplings look pretty delightful, and as I'm going through a major pickle phase at the moment the pickle platter is really just calling out to me.

okay that cake looks old and crusty!! but i'll take your word that its tasty

Laura: Cafe Glechik has EVERYTHING U COULD EVER WANT.

Edd: So frighteningly tasty! Too bad more places don't make it like that!

No prob. Next time??

I live near M & I ....their food is really good! They have these pastry type things filled with cherry, apple, a mystery meat, and egg and onion. The fruit ones are sprinkled with powerdered sugar and its only $1! Theyre pretty big too.

thanks for taking us around! i would have never have known to order that craggly brick of carrot cake. and that watermelon at cafe glechik was whoa so good, i swear there was a fizzling chemical reaction going on in my mouth!

Felisa: Wait, that pastry has all that stuff in it? Or is that 5 different kinds? Haha. :) Ah well, shall have to try that next time; thanks for the rec!

Veronica: I miss the fizzling! We should find more fizzling pickles.

sigh, pickled watermelons. my grandma used to make those at the end of the summer. so yum.