This entry originally took place on May 23. Part two is a-comin'! 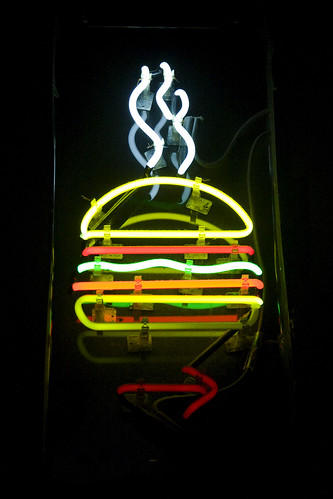 After a few years of mild apathy and the nudging of a foreign visitor, I finally made it to Burger Joint, the "not very secret semi-secret dive-y burger joint tucked behind a curtain in the lobby of Le Parker Meridian."

My earliest memory of Burger Joint is hearing about it from one of my classmates, Joe Campanale, during a discussion in our food communications class in spring of 2005. Face aglow with the memories of burger perfection, he enthusiastically referred to it as "beef heaven." And then gave more words of praise that I can't remember because this happened four years ago and I can only recollect conversations that happened in the past 30 minutes. Although I was intrigued by his outpouring of Burger Joint love, for some reason I never cared enough to actually go there.

...Until England-based Edd of He-Eats contacted me to say he was visiting New York City in May and we should grab a burger at Burger Joint. This was the poke I needed to get my burger blogging butt to Midtown and cross another famous New York City burger off my "to eat" list. 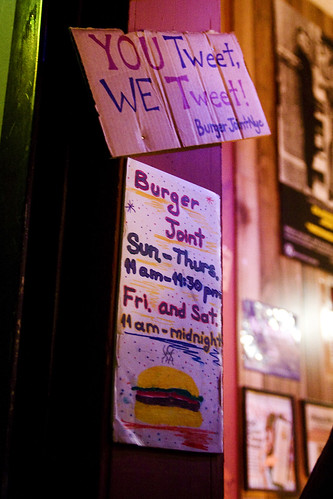 Luckily, we didn't wait in a horrendously long line that Saturday morning. It was out the door, but not far past its outer curtains. From what I've heard, it's pretty much always crowded. 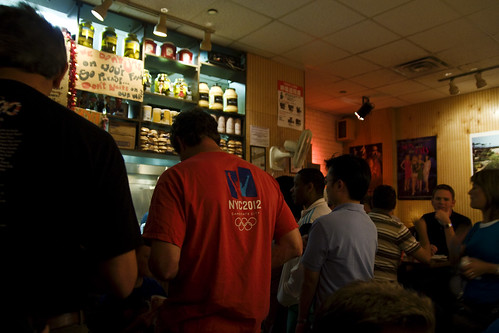 Burger Joint isn't fun to visit just because it's unexpectedly stuck inside a hotel lobby, but because its ambiance is a stark contrast from its stylish surroundings. It goes for an old-school look with random movie posters on the walls and wood-paneled booths. 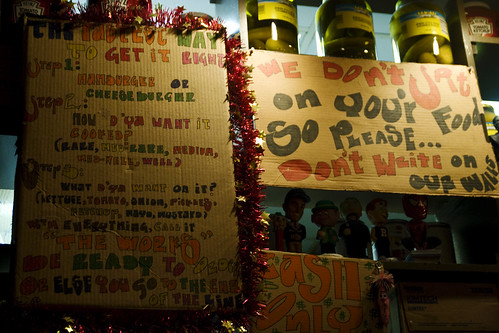 It's probably a good thing you have to wait a while—it gives you time to formulate your order. Not that there's anything complicated about their menu: hamburger or cheeseburger, level of doneness, toppings. They also have fries and milkshakes, although the cashier told me that the milkshakes were only available on the first rainy Friday after the moon enters the "waning gibbous" phase, and...well, it was Saturday, so, sadly, no milkshake for me. (Actually, I think she said they're only available on Fridays, but I wanted a way to artificially insert "waning gibbous" into my blog.) I went with a medium rare cheeseburger with lettuce and pickles. Quite a pretty thing with its thick meat puck and gooey cheese strand sandwiched between basic poofy burger buns. 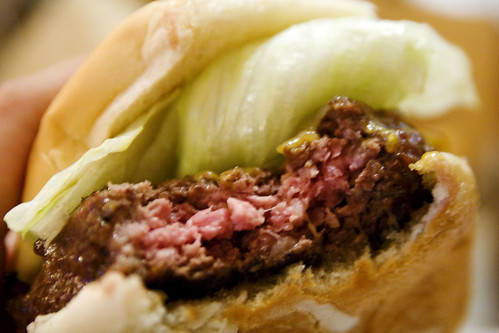 Although it certainly didn't taste bad, my feelings about this burger are the same as Edd's: not as good as Shake Shack. He compares it to Shake Shack because (I think) it was the only other burger he ate during his trip; I compare it to Shake Shack because it's my favorite burger in the city (besides that it's a similar style). It just wasn't as flavorful or deliciously fat-drippy. I'd say it's worth eating for the experience, but I'm not compelled to go back. If Shake Shack existed in 2005, Joe might have reviewed Burger Joint differently. 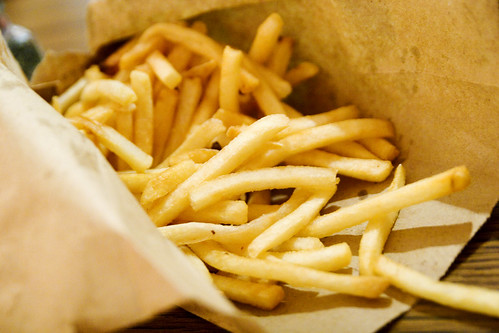 Fries were tasty and of the McDonald's-esque variety.

And the nonexistent milkshake I did not drink tasted like nothing.

After leaving Burger Joint, I navigated Edd to the nearby Bouchon Bakery (my meager purchase was a chocolate chip cookie to save for later since I was still stuffed from the burger) before finding out that he didn't have any other plans for the day. O RLY? Based on those few hours of contact IRL (as opposed to exchanging emails and blog comments), I knew it'd be enjoyable to hang out for a few/many hours more...

So I invited him to come to Brighton Beach and hang out with my friends and me. More on that in my next post. (Do you see what I did here? I made a fairly short post! But the next one will be longer. Oh joy.)

I liked that you used the phrase "waning gibbous." It always makes me think that the moon is a gibbon and that's ridiculous.

is it the Afghan restaurant you visited?

anna: I can't say I ever thought that before when hearing "waning gibbous"..but now..I WILL THINK OF NOTHING ELSE.

Kim: I'm not sure what you're referring to..?

the gibbous moon is my favorite moon phase just because Terry Pratchett refers to it often in his books :)

Michelle: I have not read anything by Terry Pratchett, although I've been told to before. DOOOHhh!..uh...is there any book you would recommend starting off with?

Kim: Ah yes, the Uighur! I should probably expand my fooding horizons, but it's so tasty and hard to get elsewhere...

oh bouchon bakery...i still have yet to really eat their pastries, but just another place to try. what's your favorite thing to get there?

I like Terry Pratchett's discworld books, one of my favorites is Nightwatch, but you can start with the earlier ones like Mort or the Color of Magic.
Looking forward to reading the long post next!

That looks like a good level of doneness. Mmm, half alive.... :) Is it just me that can't read their signs though? Also, is faux-dive and bit like shabby chic?

"And the nonexistent milkshake I did not drink tasted like nothing." Love it!

Yeah was definitely worth the visit but my heart belongs to shake shack, just need to convince Danny Meyer to open a location across the pond, although I woulnt mind another trip to NYC

There's a Tibetan restaurant in Jackson Heights if you're interested

I remember this place from when I was a kid! I was beginning to think I had made it up... Thanks for reminding me, Robyn :)

Terry: Oh man, I was SO excited when Bouchon Bakery first opened that I ate...a lot on my first visit. (I also had a friend who worked there though, so that probably contributed to my gluttony. I think their croissant and danish-y things are safe bets, and the nutter butter is this huge peanut buttery splosive thing. The macarons are unfortunately "meh." I remember liking the scones, but haven't had em in ages.

Mila: Okee, I will look em up!

SuperChomp: Yup, it rocks the faux-dive and shabby chic...with a dash of a Sex and the City poster. That didn't seem to belong. ;)

Lisa: Hehe, glad you liked that. I still mourn the lack of milkshake! ;_;

Edd: Yeah, it wouldn't be the same in England. Gotta eat it in Madison Square Park! :)

Kim: Ahh yeah, I heard about that! Thanks for the reminder. I ought to eat in Jackson Heights more often.

Maggie: I can't say I have any cool memories of a place like this when I was a kid. But I think this place has only been around since 2002 or so...how old are you? Hehe.

Yet again we see that NOTHING is as good as Shake Shack...

Opening this was a bad idea, my blood sugar just dropped some more. =( I feel like I need fries.

Hey Robin, I'm sure you don't remember me from the one time I commented on your blog here .> (I recommended the pumpkin gelato) But you seem like awesomeness all-around and as into food as I am.
I'm gonna be in New York from the 18th of July to the 20th of August, and I don't know the city at all really. So, I'd love to get together for eatings and such with ya =3 Lemme know if you're available/ willing to meet up with a complete stranger girl, lol.

Also, that looks like a lot of lettuce on that burger there O_o.