This post originally took place on July 5. Is it even relevant anymore? PROBABLY NOT. Sorry. 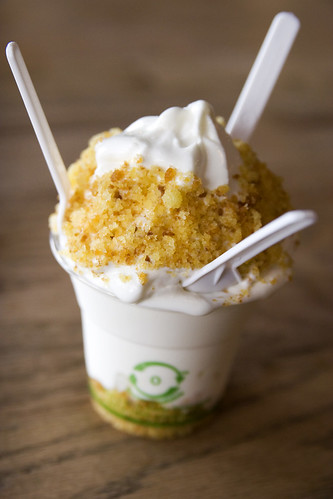 The last time I had soft serve from Milk Bar, their doughnut flavors disappointed me—they didn't taste very much like doughnuts. The previously offered cereal flavors didn't scream, "EAT ME" either, although for the opposite reason—they did taste like cereal, and not in the most appealing way. (Unless you love Lucky Charms, in which case you probably would've enjoyed the soft serve.)

Thankfully, during this visit with Jason and Amy, the rosemary with olive cake crumble (as recommended by Kathy) was quite good. It tasted like...well, rosemary, which can be an overwhelming flavor, but in this case was just a step below overwhelming. (I did end up with rosemary-scented burps for the rest of the day, though.) The crispy cake bits helped temper the rosemary-ness. I liked the lemon custard more than the rosemary, although not the Ritz cracker topping over the olive cake crumble. The Ritz cracker didn't really add much to the lemon—not crispy enough to add a satisfying crunchy texture, not flavorful enough to add...flavor. Maybe it would've added more oomph to a different soft serve, but they're not on the menu anymore so this information is useless. Yeaaaah oops. Last was a slice of Arnold Palmer cake (named after the ice tea / lemonade drink) made of layers of tea-soaked cake, whipped lemon mascarpone cream, almond tea crunch, iced tea jelly, and lemon cake. I really like the cakes from Milk Bar—as you can tell, they're a bit..intense, generally composed of flavor combinations you wouldn't find anywhere else, and are on the heavy side.

My favorite cake is the pistachio; if they have it, GET IT. Otherwise, I don't have a strong cake recommendation. Unlike the soft serve flavors, I've been pretty happy with all of them. After that first dessert, Jason and I parted ways with Amy and moved on to second dessert at Lula's Sweet Apothecary, a shop that specializes in vegan, gluten-free, and dairy-free treats, mostly in the ice cream category. Don't let the diet-friendly designation deter you if you're omnivorous (easy to say, those desserts don't always have the best reputations for being delicious)—it's good even to those of us whose stomach acids can tear through everything. Flavors of the day.

They have an interesting flavor list for their ice creams—not that the flavors are wacky, just not ones you'd find at most ice cream shops. 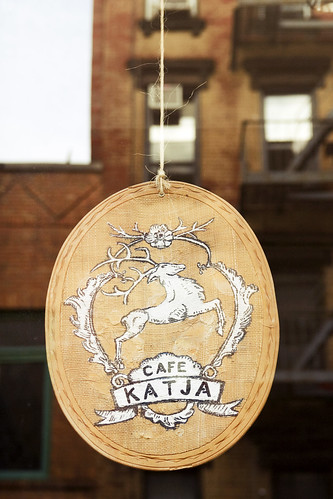 I had been meaning to visit Austrian/German restaurant Cafe Katja for months, but didn't get that real kick-in-the-butt until Jason mentioned he wanted to go there. Not being very familiar with Austrian or German food, I'm not sure how to rate it.

So here are some pretty photos! Yaaaay. We started with a hot soft and crispy-crusted pretzel accompanied by.. 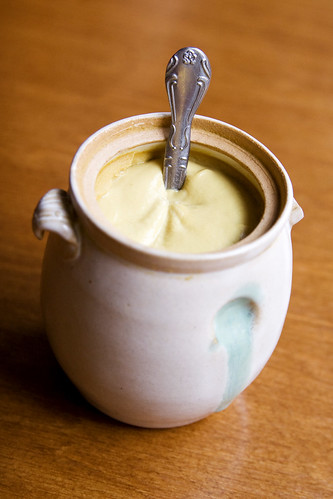 For the meat log portion of our dinner, we tried the grilled krainer with potato salad. Tastes like...a juicy sausage. And that tastes like...WIN. 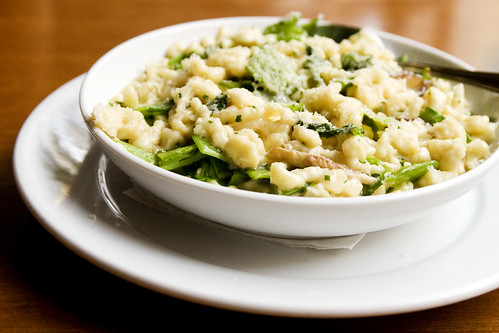 Last was the generously sized spatzel (spätzle, if you want correct accents), soft lil' egg noodle nublets with snow peas, sliced shiitake mushrooms, pea sprouts, and peppercorn sauce. Influenced by the neighboring Chinatown, perhaps? I don't think I tasted much peppercorn action, but I like the creamy cheese sauce, which didn't taste as heavy as it looked. It's a substantial entrée for vegetarians in a sausage-centric restaurant.

Although it's unlikely I'll ever toss and turn in my sleep while moaning, "I NEEDA BRATWURST," if I ever do get a longing for sausage and spatzel, I'd check out Cafe Katja again. Also, our waitress was one of the nicest, most pleasant waitresses I've ever encountered. I rarely point out service unless it's memorably good or bad, so that should mean something.

Methinks dessert-dessert-dinner is a good way to structure one's afternoon.

That spatzel looks yummy! I'm sorry I missed the rosemary soft serve at Milk Bar but I did really enjoy the cherries jubilee even if some people did think it was too sweet. It's not at all...if you get it covered in maraschino cherries like I did. Then it tastes outright sour by comparison. I also appreciate that the vegan-ish ice cream was followed up by log o' meat. Equal opportunity eating! :D

did you mean iced tea/lemonade? you said ice cream instead :)

my fave milk bar cake is the choc chip cake. the coffee cream, choc crumbs, and passionfruit coulis gets me every time!

Anna: I haven't had the cherries jubilee!..fail. Haven't been to Milk Bar since this post!

I didn't even think about vegan ice cream to meat log. I EAT IT ALLL!

The cakes were my favourite thing from Milk Bar I had the Banana but that arnold palmer looks pretty epic, me want some

Awesome post and photos! Brought back some fun memories for me...I had the cereal soft serve at Milk bar (the 'captain crunch' flavor) and I actually liked it! But not as much as their blueberry cream cookie (YUM). And I LOVE Lula's - totally agree with you, it's so much better than STOGO (although I was pretty starstruck when I saw Kevin Bacon and Kyra Sedgewick there when they first opened!)

HOLY CRAP BLUEBERRY CREAM COOKIE. I am pretty sure the main ingredient in that thing is pure unadulterated crack. Man now I want to go to Milk Bar. As if I didn't eat enough sugar already today in class.

I totally want to go back to Lula's again. We should do some fooding sometime :). I've been thinking of stalking some Chinese bakeries in Flushing or perhaps just hunting down lots of soba places in Manhattan. Part of me still longs to try more places Uptown as well.

That cake sounds terribly exciting! It's like multiple personality cake!

I can imagine lemon custard being nice, but why Ritz crackers on top? They are the salty, zigzag edged flaky cracker with a few holes punched in them, right?

So much exciting accompaniment to a pretzel! Surely they spoil you :3

Phyllis: Damn, I dunno if I've had the blueberry cookie. :O Yay for Lula's!

Anna: I want the leftovers from your class.

Jason: Another flushing trip would be great. :D

SuperChomp: Yup, the salty fatty flaky things! It seemed like an interesting topping at the time...hm.

Yeah, they give you way more butter and goo than you can use for that one pretzel. I slathered it on. :)

I want to try that rootbeer flavored ice cream!

I go to Momofuku Milk Bar more times than is healthy in a week. Self control goes out the window when you live a street away.

Love the banana cake and blueberry cream cookie, but I also loved the donut flavors. I think it really depends on the person. I like creamy > sorbet/icy so maybe that's why. My friend loved the cherries jubilee, but I preferred the strawberry shortcake. Go figure.

There is a new strawberry cake that makes me go "WANT D: " but they discontinued the pistachio cake.

love to visit the milk bar! yogurt w toppings r soooo popular nowadays. Theres one back in my hometown called sour sally n ppl r always quequeing for a serve of their yogurt. the green tea flavor always sold out! miss that after reading ur post!

Mahar: Rootbeer flavored stuff is good. Should be..more of it.

Lady Macaron: Frozen yogurt is everywhere here. And I'm sick of it cos I'd rather have more ice cream and gelato shops. :(

That dessert at the Milk Bar looks so good! I'll have to check that out next time I'm in New York!

Momofuku...my love.... Ok, cakes: banana cake and passion fruit cake are both delicious. Compost cookie and the cornflake cookie are also delicious.
If you like salty/sweet, you have to try compost cookie! It's probably my top favorite at Milk Bar.