If the phrase "treat yo' self" doesn't mean anything to you, watch this:

(And if you're not familiar with Parks and Recreation, you should watch that, too. You've only got five seasons to catch up on. Piece of cake.)

"Treat yo' self" may be a once-a-year thing in the world of Parks and Recreation, but in my world it's "any time I'm in the Serious Eats office during off-hours by my lonesome, which is many of the times." And my favorite way to treat myself on the cheap without straying far from the office is to walk five minutes to Yaya Tea Garden and plop down $5 in return for one of these babies: 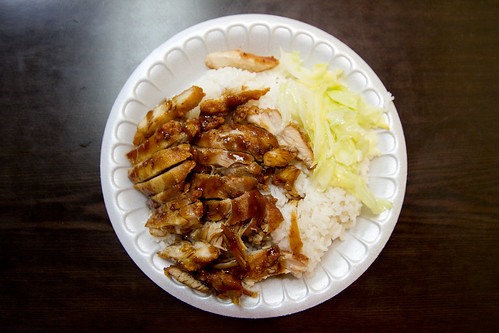 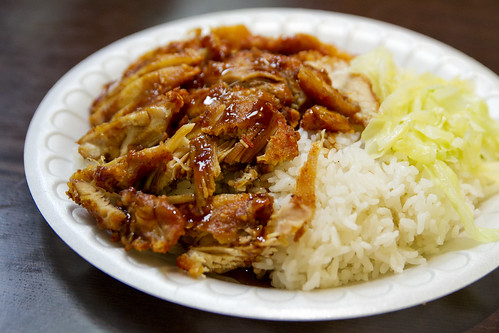 Chicken pile, come to me.

Tokyo Fried Chicken. It's a simple thing—chicken katsu topped with katsu sauce on top of too little cooked chopped cabbage and too much white rice—but I love it to the point that I've eaten it twice in the last week. The generous two-cutlet amount of chicken is mostly moist, except around the edges where it's most crisp; the rice is well cooked so that each fat, sticky grain is well defined and not too soft and I can easily shove satisfyingly big clumps of it in my mouth; the cabbage provides some vegetable content, allowing me to pretend I'm not totally destroying my health; and it only costs $4.95. That's a good happiness-to-dollar ratio right there.

Since I have trouble eating all the chicken without feeling disgustingly full (and I ignore the sensible option of not eating everything), I've gotten in the habit of asking for more cabbage and less chicken. The last time I asked this (which was, um, last night), the cashier told me, "People usually ask for it the other way around." 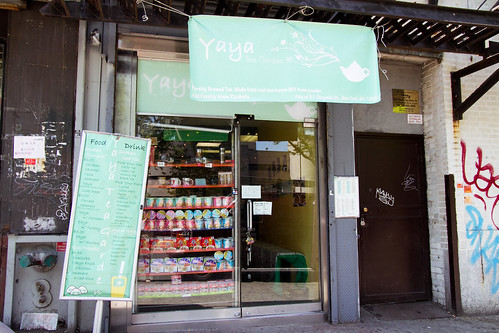 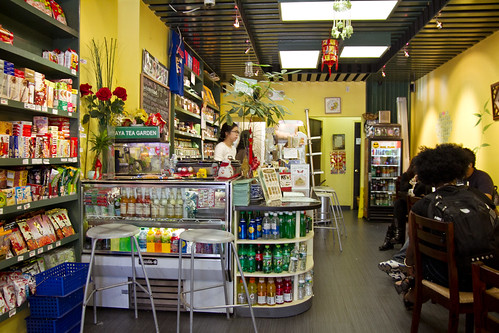 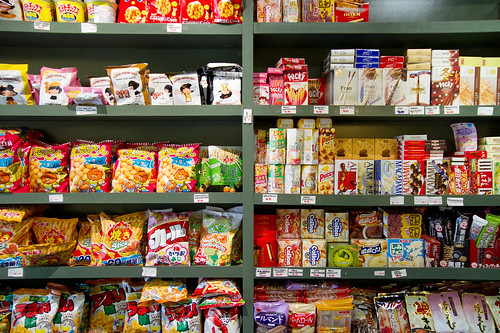 Yaya, outside and in.

Sometimes I also pick up an Asian snack, not so much because I want one, but because it's there. Yaya has a good rotating selection of packaged savory and sweet snacks—chips, puffs, the latest Pocky flavor, and the like. 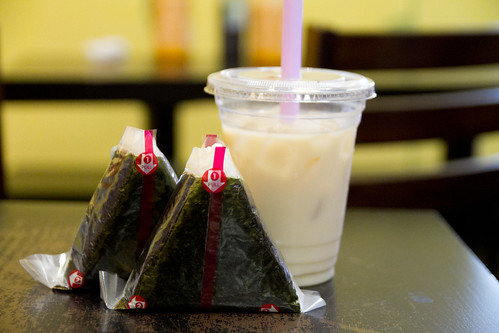 THE YAYA KEEPS ON GOING.

Yaya also has a large menu of onigiri (my favorite so far is the shrimp tempura), and as their name implies, tea drinks are their specialty. (Or is that special...tea? Yeah, I went there. It's 4:30 a.m., I CAN DO WHAT I WANT.) But I skip their drinks in favor of grabbing something around the corner at Teado. 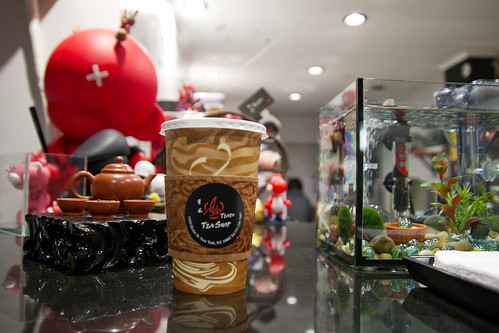 I usually just get milk tea ($3.25)—you can choose between Earl Grey, jasmine green, osmanthus oolong, or jasmine oolong. For something more treat-like, I'll throw in the extra quarter to get it ginger-flavored ($3.50). Teado's ginger milk tea is strong, spicy stuff that stings your throat a little and has a glorious, sort of earthy smell.

Other reasons I go to Teado, aside from liking their tea: it's run by a young, friendly Taiwanese couple; I've been told their boba is especially good (which doesn't apply to me since I personally don't like boba in my drinks, but it's nice to know); they have one of those coin banks where a cat pops out of a box to take your coins (aka the best way to get me to hand over all my loose change), just one of many quirky decorative flourishes; and I'm somewhat miffed that after two years of Teado being the only bubble tea shop on the block, a Kung Fu Tea shop opened down the street in 2011, probably taking business away from Teado. I know it's not weird in Chinatown to have two bubble tea shops on the same block, but Kung Fu Tea is a growing chain and Teado is a small, independent shop, and blah blah blah bluh blah bluh. Know what I mean? And from what I recall, Kung Fu tea doesn't make ginger milk tea. So whatever.

[...crosses arms, signalling that I have run out of things to say]

Holy crap! That's cheap! Oh geez, you have me craving chicken katsu. It's 1AM. I could drive to Zippy's to pick some up.

No. I should go to sleep. Eating greasy food before sleep gives me nightmares.

I don't know what to do.

I'd eat that chicken and rice dish every day if I lived nearby. I love me some chicken.

I love the Tokyo Fried Chicken too! Except I don't have the problem of feeling too full after eating all the chicken. I blame my sort of hollow leg. Kung Fu does have a ginger drink but it has no tea in it :( I'll have to try the ginger milk tea at Teado.

But, noooooo I've been craving katsu for the past two weeks. Midterms, begone so I can go and get some foods!! That looks so good. So, so, good.. *stomach gurgles*

Marvo: I want a Zippy's near me. ;_; And a glabillion plate lunch places.

Helen: I've been disappointed by my stomach capacity lately. I...CANNOT...EAT EVERYTHING! :[ But it's mostly a problem when I'm eating just one kind of dish.

I might check out the ginger drink, thanks for the heads up! Let me know what you think of Teado.

Alice: You need a break every now and then. Get some katsu! It'll help you study better?...probably not, but uhh yeah you still need food. Good luck with midterms!

I love that you ask for more cabbage and less chicken, but LET'S KEEP THE EPIC MOUNTAIN OF RICE.

Love Aziz Ansari but can't get into the show too much because there's too much Amy Poehler. I wish they would do a spin-off with just Aziz. Anyway, must try the chicken! And double yay, a new post!

Melissa: Why would I want less rice? That's so funny. Haha! You're funny, Melissa.

bionicgrrl: Oh noes, I like Amy! She's funny! Everyone on the show brings the funnies! In different ways! I WANT TO KEEP AALL OF THEEMMM. (I have seen Aziz's stand-up show live though, and it was amazing funny.)

If you wanna grab some chicken and need a companion, tell me and I shall join ya!

Hehe I just wanna thank you for that "Treat Yo Self" clip. I only came to realize how great Parks & Rec is in its current season, finally catching it on Hulu. Also I Aziz Ansari is a riot!

btw I use your "round things are tasty" tote and people TOTE-ally comment on it everytime I do! The girl who runs my new favorite L.A. gift shop (Pygmy Hippo Shoppe) sounded mighty intrigued so I hope she contacts you about it. :) She also sells indie zines so I think you are right up her alley!

And now, I shall Treat Mah Self to some Magnolia's banana pudding.

I have one of those cute kitty banks at my house, and it is useful for stealing all my friend's loose change. Unfortunately, they usually run out of pennies and start rifling through my purse for more change. The next day, I wondered where all my coins for the soda machine at work went.