UPDATE (3/9/12) Nevermind, Hinsch's isn't closing! (Man, something keeps saving them.) The restaurant is getting a new owner. Read more about it here. 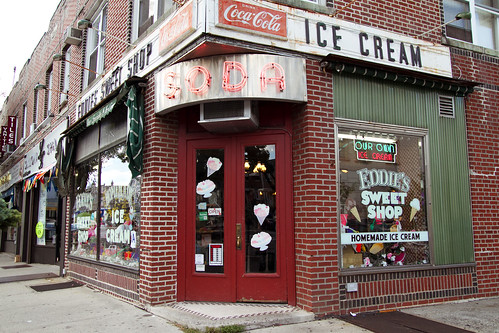 Ever since I first tried the marshmallow sundae at Eddie's Sweet Shop in Forest Hills, every other sundae I've tried just can't measure up. The appeal of Eddie's isn't their homemade ice cream—ice cream that's perfectly satisfying—but the sauce it's drowned in. I mean. Look at this disgustingly beautiful thing: 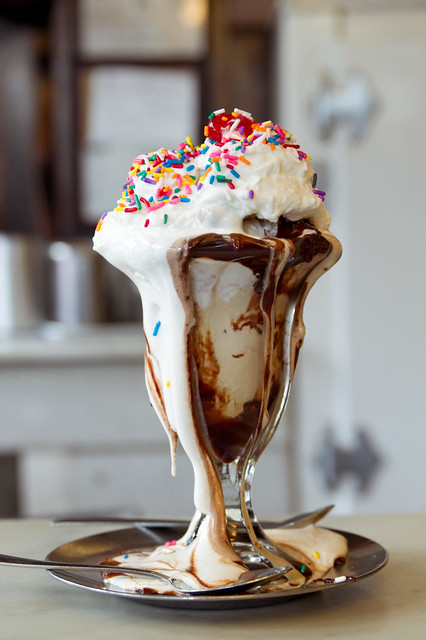 The thick, gooey, throat-gaggingly sweet (you know, in a good way) marshmallow sauce drips out of the cup like a lava flow. You repeatedly drag your spoon up the side of the cup to catch the excess goo, but it keeps spilling out from the top. The cup appears to be generating marshmallow goo out of nothing. WHAT SORCERY IS THI—nevermind, they just put a shitton of sauce on top. And by "shitton" I mean "just the right amount." Moderation, meet the mighty fist of American gluttony. A fist thrusted by jet packs running on fat and sugar. 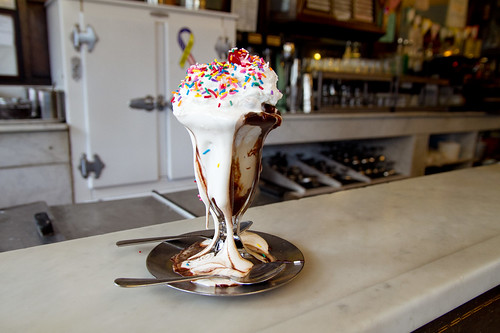 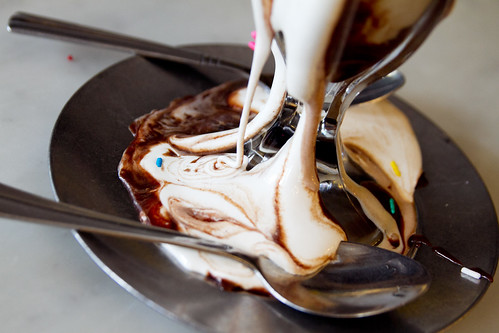 I didn't eat the whole thing by myself. I have—what are they called—limits? And those limits do not extend to eating a whole two-scoop sundae smothered in marshmallow and chocolate fudge sauce (good, thick chocolate fudge sauce), topped with a pillowy mound of thick whipped cream, rainbow sprinkles, and a maraschino cherry all by my lonesome.

...I split it with Max. ...After we had spent the afternoon eating at a bunch of Tibetan restaurants in Jackson Heights. (Queens is awesome, guys. Stuff yourself with Tibetan food for lunch, then stuff yourself with a big ol' American sundae for for dessert.) 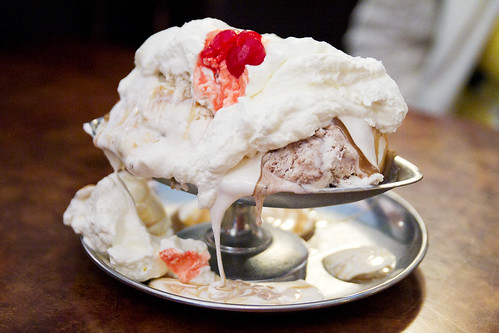 Two-scoop sundae, making a mess all over itself.

I must admit that my next two visits to Eddie's weren't quite as transformative. I think it's because those sundaes were served in a wide, shallow dish instead of a tall cup. The cup sort of funnels all the goo into a smaller area, leading to the Sundae-Looks-Like-It's-Erupting Effect (aka the SLLIEE), an effect that the dish can't achieve to the same degree of awesomeness. Then again, in the dish the sauces cover a greater area of ice cream, which would seem preferable. But in the tall glass, that surface area seems to be translated into the inner sides of the glass getting coated in sauces? Or whatever something muhbluhbluh... 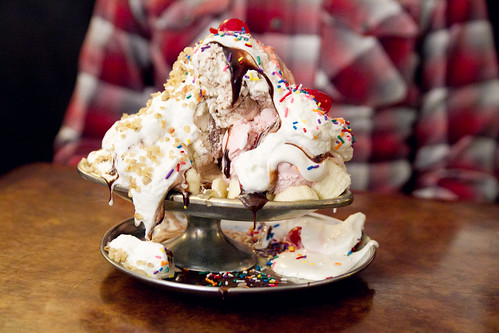 I MEAN, I JUST DON'T KNOW, GUYS. Maybe the first time was the best because my brain had nothing else to compare it to. Maybe the ice cream scooper on my first visit was more generous with sauce portions than subsequent scoopers. (Not that the subsequent sundaes were meagerly sauced. I think that's a cosmic impossibility at Eddie's.) But next time I go to Eddie's, I'll request a tall glass to see if I enjoy it more that way. 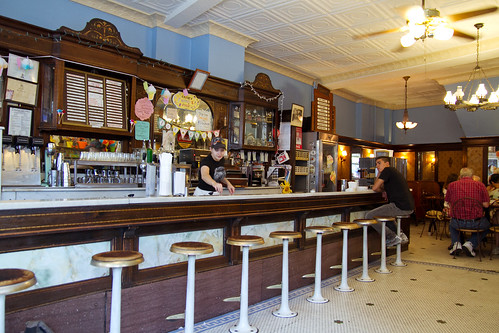 The appeal of Eddie's isn't just in their ice cream. It's the charm that oozes out of every wall. Including the mosaic tile floor and the moulded ceiling. And the marble-topped counter. And the wooden swivel stools with their own footrests. And other things I'd attempt to describe if I had a more poetic way to do it. Aarrhgh well [points to photo]. 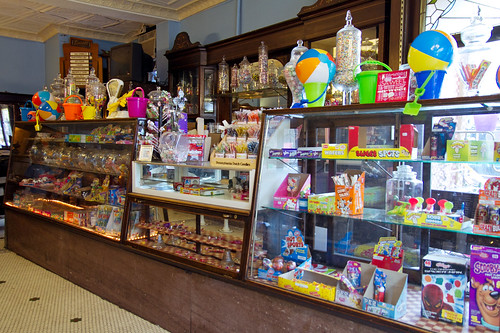 Oh yes, and the enormous display of candy. (See way more photos of the shop in this Flickr set.) If I were a kid, Eddie's would be the source of all manner of excitement-induced convulsions, possibly followed by brain explosions.

For some history behind Eddie's, check out this article on ForestHillsPatch. The article says the building Eddie's lives in dates back to 1925, and it was first Witt's Ice Cream Parlor before becoming Eddie's in 1967. 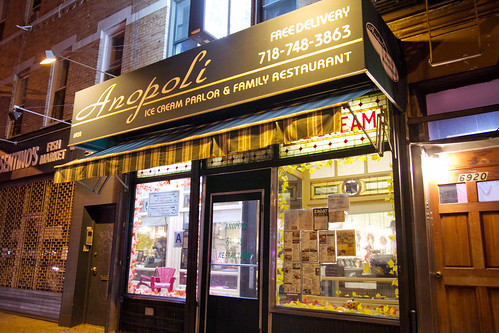 Eddie's may be my favorite old-fashioned ice cream parlor in the city, but I won't say no to others—such as Anopoli Ice Cream Parlor and Family Restaurant in Bay Ridge. There's a treasure hidden behind that awning. 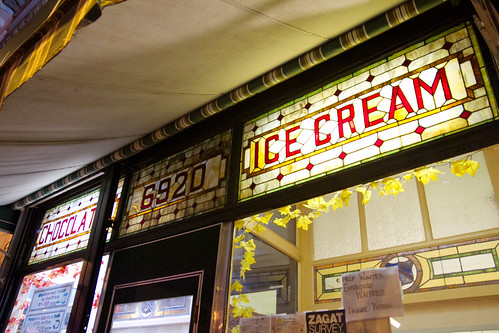 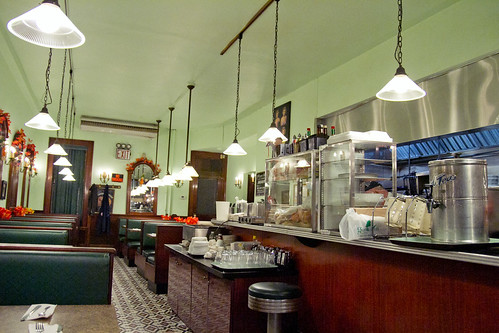 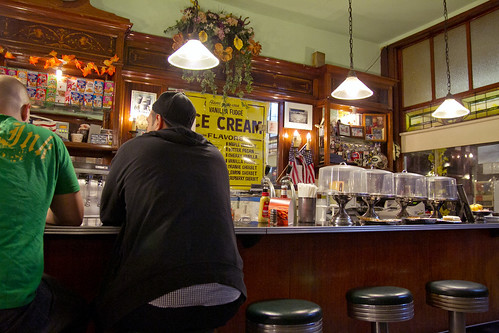 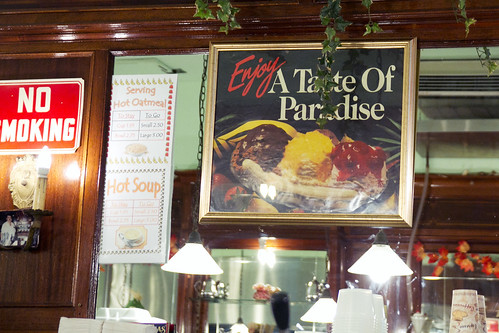 Finally, paradise is mine.

Inside, you've got plenty of booths and stools to choose from. 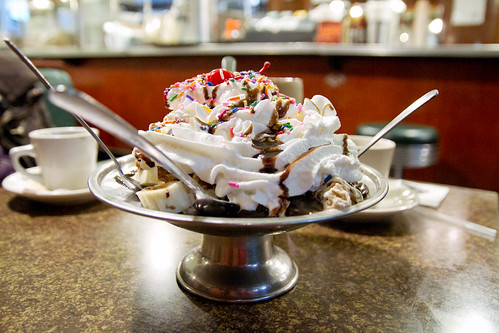 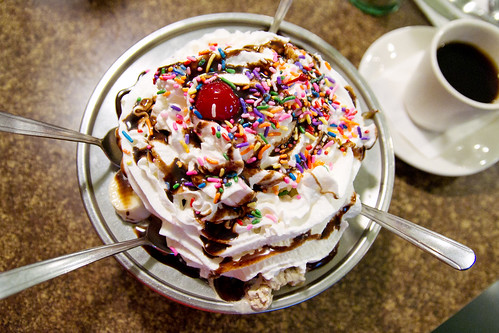 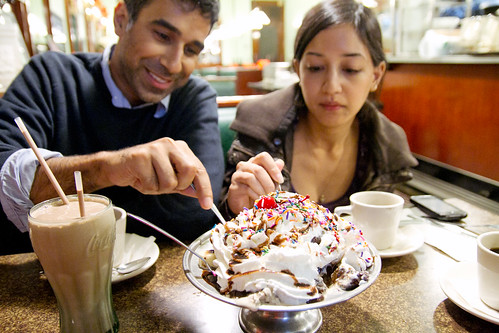 Sami and Laura dig into a "Super Special" sundae.

Our group of four went for the Super Special sundae ($8.95), a pile of three scoops of homemade ice cream, banana slices, marshmallow (sauce, I'm assuming; I...don't totally remember by this point), and wet walnuts completely covered in whipped cream, drizzled with hot fudge, and topped with a single cherry. We may have added on the rainbow sprinkles to enhance the sundae-eating experience. The sundae would've just been naked without 'em, you know?

What looked like a five-year-old's dream was, unfortunately, not so successful with us adults. The ice cream could've been smoother and the whipped cream and fudge could've been thicker and richer. Its most memorable quality was its impressive pile-ness and girth.

But I recognize I'm being nit-picky. Anapoli has been open for over 115 years; they don't have to make the best sundae to succeed. If I lived closer, I'd surely hang out there for sundaes and diner fare. (It's near Bab al Yemen—hit up both places in one night!) 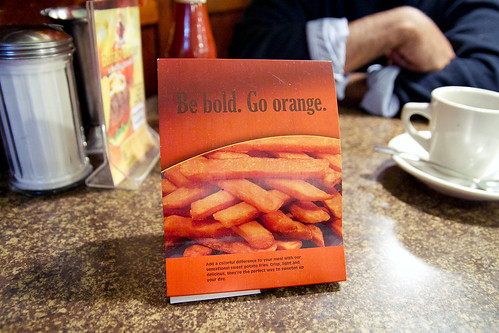 Maybe I should've ordered their "sensational sweet potato fries." Oh well. I'll just have to imagine what could've been. 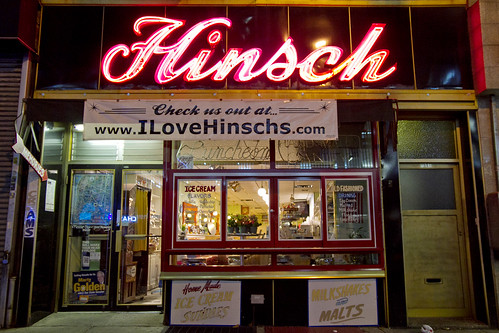 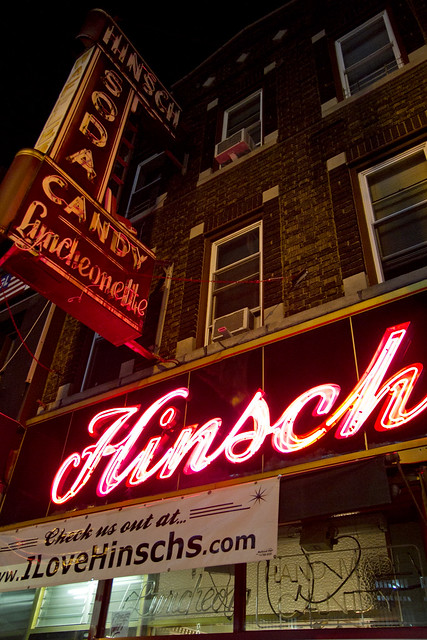 For more "Adventures in Great Old Timey Ice Cream Parlor Sign-age," I'd say don't miss Hinsch's—serving the Bay Ridge community since 1946—but you'll probably have to because it's closing for good on March 3. That is, in two days. That is, crazy soon. :(

Update (3/9/12): Hinsch's isn't closing after all; it just got a new owner! I'm not going to edit the rest of my post to reflect this news, just telling ya up front. 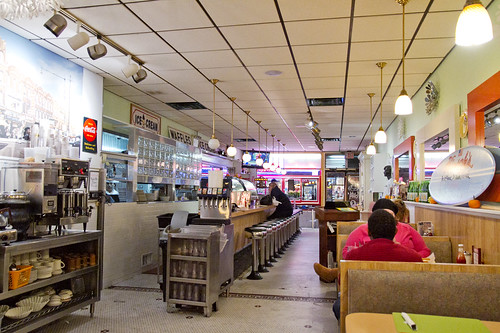 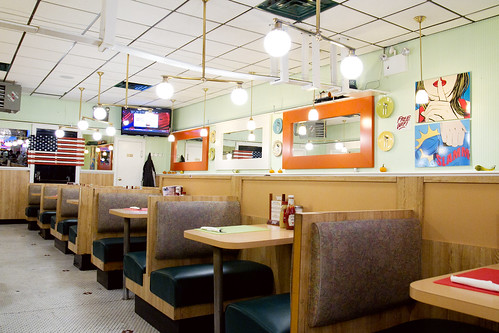 Yes, I should've posted this earlier to give y'all a heads up. When I first started writing this post in December (yes, I am the slothiest blogger), Hinsch's land seemed to be doing all right. Then in early January, news broke that Hinsch's was slated to close on March 1 and its space was to become a burger joint. Early February brought some uplifting news that the burger deal fell through and Hinsch's would continue to stay open.

But last weekend, my roommate told me she had just visited Hinsch's and it was for sure closing on March 3.

I thought I should try to make a final visit (which would've been my second visit) before publishing this post. A few friends and I met there on Tuesday night, comfortably before the closing time of 9 p.m. at 7:45 p.m. Some of the lights inside were on. But the normally blazing pink neon sign outside...was off. And the tables...were empty. And the door...was locked. And the restaurant...was totes closed.

...And then we walked to Bab al Yemen and masked our misery in piles of meat nubbin-enhanced hummus and chunks of warm, crusty flat bread, stuffing ourselves until we could feel no more. So it was still an awesome night.

But I'm still kind of bummed. I called the next night to double check their opening hours (still 9 p.m.) and that they were closing on Sunday (yeup). I'll assume they had a good reason for closing early on Tuesday, or maybe it was a slow night and they closed early. Hinsch's had almost closed in 2011 before being taken under new management and undergoing a two-month renovation; it's a shame the revitalized restaurant couldn't last longer. Brooklyn needs ice cream parlors much more than it needs burger joints, but Hinsch's just wasn't economically viable. (On the same block as Hinsch's are Burger King and Five Guys. I'm not sure if a burger deal is still the source of the closing, but if another burger joint moves into that space or if Burger King is taking over, blalarrghguguuhgfflurg stabbitystab either way.) 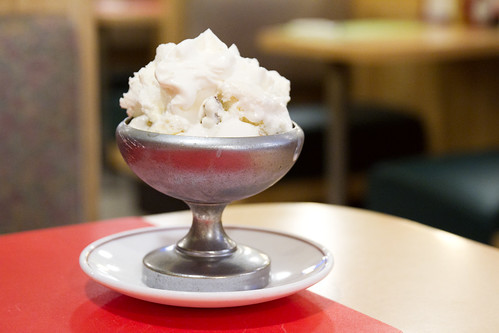 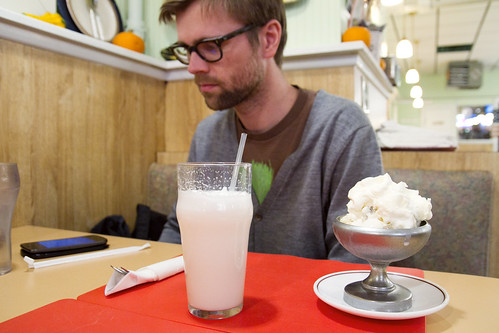 Well...on to the ice cream, which I've only tried once when I first visited last November. Hinsch's also has a Super Special sundae that's about the same thing as Anopoli's version (or...vice versa?), but since it was just Kåre and me grabbing a snack before dinner (at, yes, at Bab al Yemen, because where else would we eat), we shared a simple marshmallow sundae ($5.50) with homemade butter pecan ice cream topped with marshmallow sauce and whipped cream.

Overall, it was all right. If Eddie's hadn't spoiled me with sundaes suffocated with sauces of all kinds, I might have liked Hinsch's more. I shouldn't fault them for using a perfectly reasonable amount of marshmallow sauce and whipped cream. BUT EDDIE'S HAS TURNED ME INTO A MONSTER. AND NOTHING ELSE WILL EVER BE GOOD ENOUGH. 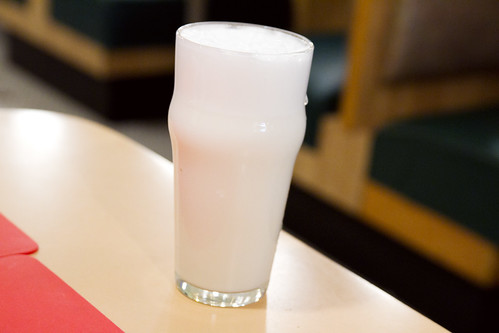 We also shared a vanilla egg cream ($2.75). I've tried a few chocolate egg creams in my life, each time wondering why I'm not more enamored by this classic soda fountain drink of seltzer, milk, syrup, and no eggs. Turns out I like the vanilla version way more, even if that's less traditional.

Even if I like Eddie's more than Anopoli and Hinsch's, I'd never want places like Anopoli or Hinsch's to close. Sigh. If you get to visit Hinsch's before it closes on Sunday night, let me know how it goes.

donuts4dinner: DO IT! I think the two-scoop sundae costs less than $9. Aw yeah.

Oh man. That drippy sundae photo. I can feel it, I can taste it. And I can't believe we don't have even ONE marshmellow-sauced sundae in Dubai. We're living in the dark ages out here. with zombie pizza crusts.