I know I should be blogging more, guys. :'( And I'd like to. Because I LIKE YOU, DEAR READER. But the last week was particularly unproductive because 1) I've been so congested that my sense of taste has been sort of nonexistent, which doesn't really inspire me to write about food, and 2) I'm going to Honolulu today and had to prepare work for when I'm gone. There were many 5-hour (or less) nights of sleep this past week (not all work-related; mostly me being terrible at time management). I don't know how my brain is functioning now. I ought to go to bed in the next 15 minutes to get me in tip top shape for...my 10+ hour flight. Hm. We'll see how that goes.

Although I won't be on the Internet much during my trip (Kathy's house is so new, it doesn't even have Internet yet, ooooh), I'll try to post an update during the next week!

But before I leave, here's a quick lil' post. Although I first heard of Van Leeuwen when they started serving artisan ice cream out their sunny yellow trucks in 2008, I didn't run into one of those trucks until just a few weeks ago at the corner of 5th Avenue and 15th Street. Part of the reason I never sought it out was due to hearing mixed reviews: I heard more "mehs" than "yays." But considering how much the company has grown beyond just being an ice cream truck in the past few years—they recently opened a storefront in Greenpoint and they sell pints at Whole Foods at other gourmet food stores—I figured I had to give it a try. Out of the available flavors—pistachio, vanilla, espresso, chocolate, hazelnut, mint chip, gianduja, Earl Grey tea, and strawberry—I went with mint chip and strawberry ($3.95 for a small). It's easy to tell which one is mint chip, but the strawberry scoop barely had any color. And that lack of color translated into lack of flavor. (In case you're wondering, I ate this before my week of congestion.) If the ice cream doesn't taste like much—and I'm not sure I would've been able to identify it in a blind taste test—it doesn't matter much that it's made with "sun ripened strawberries sourced seasonally." For strawberry ice cream done right, check out Blue Marble in Brooklyn. Their strawberry ice cream is some of the best I've ever had.

The mint chip made with "organic Oregon peppermint with Michel Cluizel 72% flakes" fared better, but still tasted like it needed an extra ass-womping of peppermint. I mean, I don't want the ice cream to taste like I shoved a handful of peppermint leaves in my mouth (...or maybe I do), but I want more than a whisper of flavor. I liked what I tasted; I just wanted more of it.

Aside from the flavor problems, the textures of both scoops were not particularly dense nor rich, despite what their website says. I know they're using good ingredients—fresh milk, cream, and eggs—but for some reason the combination didn't reach its full potential in my bowl.

I've been told that the best flavors are ginger (which was sold out that day) and Earl Grey, so I feel like I should try those before giving Van Leeuwen a full, "Meh." You know I'm not one to write negative reviews. I like that they use high-quality ingredients and environmentally-friendly serving ware, but those aspects aren't what's going to pull be back: that's up to the ice cream. So far, I'm not pulled. If you think I'm way off base, feel free to let me know. I'm down for any excuse to eat more ice cream.

And just to bring a little sunshine into this post, here's a random doodle I made during Tristan's birthday get-together: 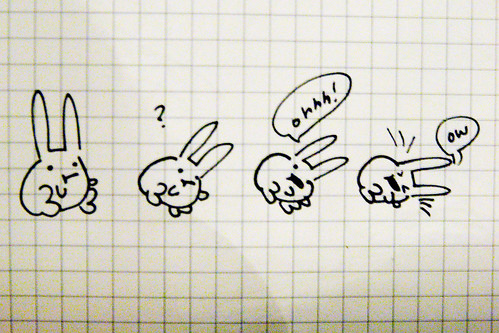 yeah, it can be hit or miss. I tried hazelnut, earl grey, and ginger last summer when High Line was opened. Hazelnut was blah, earl grey was pretty decent with tea flavor infused, Haagen Daz's ginger ice cream is better.

I've never been in love with any of Van Leeuwen's creations, partially because of proximity, but mostly because I feel like I've had better mass packaged ice cream *gasp.*

PS - I like how fat bunny has a pain noise that sounds Asian (I separated each frame so the last one corresponds to AEEHA).

I often come across Van Leeuwen trucks but haven't tried their ice cream because it's either too cold when I find a truck, or they are sold out of all the flavors I think might be interesting. Overall their flavors are kind of blah anyway though...I can do better at home, but props to them on their success.

I live near the start of the High Line and there's been a Van Leeuwen truck parked there every weekend since the High Line's opened. I went to get ice cream from the truck with my 5 year old daughter (whose favorite place is L'Arte de Gelato). She wouldn't even finish her cone. Took four bites and then tossed it in a trash can. She said, "It tastes like nothing". Now every time we walk past the Van Leeuwen truck, she says "Daddy - there's the ice cream truck with the ice cream that tastes like nothing."

Ariel: I like Haagen Daz, although I rarely eat it since I can't eat a whole pint of anything. I get tired of one flavor too quickly.. :(

Nicholas: I should've made fat bunny go "AIIYAAA!" That'll be for the ASIAN MARKET.

Anna: Oh yeah, you can DESERT QUEEN! I'm sure your stuff tastes better. :) That reminds me, I want to make more ice cream at home. And now it's the right season. Bwahaha.

Michael: Sounds like your daughter has a good set of taste buds. And she has way better restraint than I have! ;)

The mint chip is definitely "meh." It's not very minty and it's not actually "chip" as the chocolate pieces are more like the dust left over from chopping a bar of chocolate - I want substantial pieces, not flecks of chocolate dust.

The Earl Grey tea is pretty good, but there have been days when it's been icy - not good!

I take anything that's marked "artisan" or "artisanal" with a huge grain of salt, as it often is just an excuse to jack up the prices!

Van Dyke's of Ridgewood (NJ) has always had home made ice cream, and is one of the tastiest ice creams I've had growing up! It's also cheap and doesn't call itself "artesanal".

Fat bunny, please be my friend.

I actually like Van Leeuwen's ice cream. I had the hazelnut and ginger and found both the be quite yummy. What I don't understand is Sundaes and Cones. I've given them 4 chances and each time I've been completely underwhelmed.

I've never tried Van Leeuwen's before. I was tempted until I read the meh reviews and the.
The 5 yr old seems to be spot on...lol. I probably would complain about how bad it was, even while eating it. All because I spent money on it. :D
I've been cutting out processed sugary stuff...:T so I have not tasted real ice cream for a while. Have had Red Mango. lol. Not the same...

oops - I meant meh reviews and the fact that the 5 year yada yada. yeah. I'm tired and I'm at work. lol. not a good combination. ~_~

"You know I'm not one to write negative reviews."

I understand, but that shouldn't discourage you from writing critically about a subject. I share your experience of the strawberry. And, I'd add, nothing is so bitter as bad ice cream.
Below my thoughts on Van Leeuwen, both as ice cream and a concept.

I have never inquired what ingredients are combined to make a Mr. Softee ice cream, just as I’m not inclined to ask what goes into a sausage. The mystery is part of the pleasure. And, it is pleasurable.

Last year, I noticed a new truck, not another soft ice cream but something on another plane entirely, the Van Leeuwen Artisan Ice Cream truck.

I admire the brand but don’t like it. Although Van Leeuwen has their graphics and their story down, the whole narrative reeks of inauthenticity. It’s a perfect example of what I call an insta-brand. It tries so hard to be right that I’m certain there’s something terribly wrong at the bottom of it. I suspect it is the brainchild of children who grew up in too hygienic interiors and who were swaddled in logos from the day they were brought home.

I would like to like the product, one made with impeccably pure ingredients, all, I imagine, “fair-market” sourced from the greenest purveyors, but to me it embodies everything I dislike about so many new brands. It is a brand, say, that certain mothers choose because they want other mothers to see their children eating Van Leeuwen. Which is to say that the experience is not about ice cream at all.

I am also offended by the completeness of the narrative, which is to say that there’s no room for the customer to do anything but consume it passively. You take it as you would drink wheat grass, because it’s good for you.

A good brand allows its customers and prospects to internalize its message and meet it on their own terms. I may prefer the taste of real ingredients and I may suspect that Mr. Softee is made of synthetic things, but the contradiction is resolved in the the totality of the experience, the sum of which can be described as a moment of happiness.

Van Leeuwen forces its goodness down your throat. It’s a brutalist approach to marketing. An approach that we see more and more, particularly in high-end goods and services, where, ironically, consumers demonstrate less confidence and imagination that one might expect. The same insecurity explains much of the success enjoyed by Frank Gehry, as well as restaurants with Mario Batali’s name attached to them.

The fact that I find Van Leeuwen’s chocolate anemic, their strawberry vague, and their famous vanilla, ok, only makes it easier to dismiss the brand. In the end, unlike Mr. Softee, Van Leeuwen has no charm. In spite of, or because of its artisanal yellow trucks, the brand has achieved the near impossible, which is to make ice cream no fun at all.

Poor Poor Van Leeuwen...They've fallen into the classic trap of underflavoring! Novices! =P
Roboppy, you should write them a letter telling them that when you're making ice cream you need to HELLISHLY over-flavor and over-sweeten it because the chilling/churning process mutes all flavors!!!

yeah, i had the cinnamon ice cream which tasted fine but had serious texture problems.

Hit or miss is the way to put it. In this case, I thought the chocolate hazelnut flavor was fantastic and have heard nothing but bad things about strawberry and cinnamon. Given how easy it is to make ice cream at home, it's tough to justify the cost of that much inconsistency, organic or not.

Wow. I haven't heard of this brand (which makes me feel like I live under a rock), but even the custard based ice creams are just not that hard to make and make well.

A gazillion years ago I had a summer where I experimented with tea-based ice creams, and earl grey was easy and relatively quick. I feel like there is no excuse for mediocre ice cream.

you are so right.
i've tried their ice cream about 5 times and each time, it was not very good. it's completely overrated and overpriced, hipster ice cream. the strawberry scoop i had tasted like cheese--and not in a good way.

You are looking in the wrong boro, Check out Malu in LIC. www.malulic.com

i will let the ice cream speak for itself.