Worlds colliding over Mister Softee. I'm the green pants-ed one. Or poop-colored-cardigan-ed one.

"Let's take a photo with him!" Kathy pled* after taking a quick glance at The Man Who Ate Everything himself, Jeffrey Steingarten. We happened to be at the Big Gay Ice Cream Truck the same time that Jeffrey decided to taste his way through their menu. Wattup, fortuitous timing.

Those last two lines aren't exactly verbatim, but after much back and forth the conversation may as well have dissolved into gibberish. With Jeffrey being occupied by more important matters (tasting ice cream, feeding his Mister Softee-loving dog Sky King, talking to the Big Gay Ice Cream men Doug and Bryan, chatting with another impassioned fan) and Kathy and I firmly keeping to our task of photographing Doug and Bryan's frozen concoctions before they could melt into dairy-based puddles, we never got a "real" photo with Jeffrey. But Doug thankfully took the above photo with his iPhone, and it's a far more amusing snapshot than I could've gotten with my dSLR.

If you haven't read my About page (it's okay if you haven't; hell, I just realized it still says I'm 23, IT IS FULL OF INACCURACIES/I am retaining my youthfulness through lies), then you may not know that I named my blog about Jeffrey Steingarten's first book of food essays. If you're into food writing, then you figured it out without having to read that page. And if you haven't read his book, you need to get it ASAP (along with his second book, It Must've Been Something I Ate. His writing is refreshingly funny hilarious (food writing needs more hilariousness, methinks), smart, authoritative, and clear—every word counts, and none of it is flowery.

Despite how approachable he sounds in writing though, he intimidates the crap out of me. As do most humans. (Related note: I met Jeffrey once before and while channeling his previous profession as a lawyer he joked that he could sue me for adapting his book's title. Hehe nervous laughter!) But this is not the time to delve into my crippling lack of self esteem—I mean, WHY DO I FAIL AT EVERYTHING [sob]. In the end, we at least got to chat with Jeffrey for a bit before he pulled Sky King away from the magical land of sweet creamy things and rejoined his wife while ambling down 17th Street to their next destination. So, back to the Big Gay Ice Cream Truck. I sing its praises quite often, and the uninitiated sometimes ask, "But isn't it just like a regular Mister Softee truck with more toppings?" First, it's more than just "soft serve with fun toppings"—I don't think anyone else can beat Doug and Bryan in an "Ice Cream Dudes I Would Most Like to Hang Out With" contest. And to answer the question: Well...yeah; isn't that awesome? Mister Softee soft serve (or most soft serve in general; I keep thinking about the stuff I used to eat at the end of every Chinese buffet meal in suburban New Jersey) on its own is a pleasant respite on a hot day, but offers nothing in the ways of a culinary revelation. What is is good for though is acting as a sweet and creamy vehicle for other ingredients—rainbow sprinkles, a chocolate shell, or...crushed wasabi peas? Yup, they can do that for you. 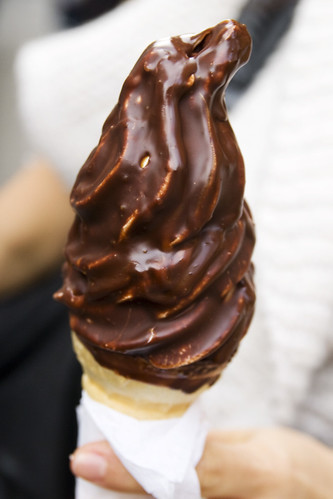 Salty Pimp, get in my belly.

My favorite is the Salty Pimp, a vanilla soft serve cone drizzled in dulce de leche, sprinkled with sea salt, and dipped in chocolate. Salty, sweet, creamy, and crunchy (well, chocolate-shell-crunchy)—few combinations are better than that. My love for this cone hasn't abated the slightest since I first mentioned it last year.

I'd tell you about the truck's other goodies, but I'd rather wait until their new website is up. I took the photos for it! It should be rad! Woohoo! But until that site is live, you can check out biggayicecreamtruck.com for the latest updates on their whereabouts (usually at 17th Street and Broadway, unless they're appearing at a special event).

That's an awesome photo of you guys- what's with the doggie though? He looks sneezy/rabid!

Dying to get the Bea Arthur...

I still have a personal vendetta against this truck (although I love the salty pimp too). They said they'd come to Columbia, but never did. Well, boo-to-you.

Congrats on winning the best food blog for SE!

I love the look of the stuff they sell, I mean just look at it how could you not love it!! the Salty pimp looks like heaven, can you convince Doug and Bryan to come to the UK for the summer :)

It's like celebrity day for us. I had a close encounter with Elijah Wood recently.

grace: I think the photo was just taken at the most inflattering moment that the dog was monching on some ice cream. :)

Nicholas: :[ Well...um..hm...now that you're done with school you can go downtown and try it!

Eddie: HAHA, Elijah is just like the rest of us. Except he was Frodo.

What a double-dip of luck!
I have never found this truck...my life is a barren desert. I will FIND IT TODAY!
I'm dying here for envy
There was NO ICE CREAM at the Beard Awards!
Why did I even bother going?

just wanted to say thank you for a picture of a dog eating ice cream. i love that shit.

My favorite part of the picture with Steingarten is Sky King. Or should I say the frenetic blur of teeth and ice cream. Can't say I'd act any differently either.

Oh Robyn, you should have taken a pic with him. Despite his snipe remarks on Food Network's Iron Chef, I'd love to really have a pic taken with that man. He is quite a character.

Danny: Glad you like it! That dog DESTROOOYED that cone. Just took a few giant licks.

reese: We thought were were building up to the "ask for a photo" moment as we were talking, but then he sort of just turned and walked away when he was done. It was funny. It didn't feel rude or anything (he was nice), just like.."Ah, he's done..okay he just left." There was no transition, haha.

The idea of meeting Jeffrey Steingarten face-to-face intimidates the hell out of me too, but I have to be biased and say that MY DOG IS CUTER!! Muahahahaaa

The fact that you check with the Columbia Journalism Review regarding word usage makes me so happy. And it was quite a pleasure seeing the girl and the man together in such a nice venue. You both eat and write well, which is an achievement and a contribution to a better world.

(By the way, I don't know how to "use HTML tags for style" or I would italicize the name of the review. Just so you know.)

Meg: One of those few times when I was in the right place at the right time. Pheww.

Marsha: HAHA, I'm glad you noticed that. ;) Although I must admit, I didn't go straight to the CJR; I googled the different spellings and that was the best source.