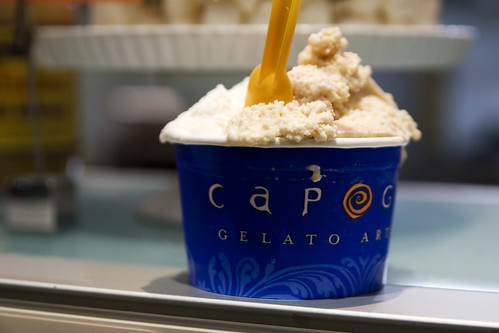 Trips to Philadelphia always start the same way. Alex meets me at 30th Street station, we exchange a few gestures of delirious happiness to see each other, and then we walk to our favorite late-night eatery: Capogiro. There isn't really an equivalent of Capogiro in New York City, surprisingly—that is, a gelateria with that has some atypical flavors alongside the traditional ones, like Thai Coconut Milk and Honey Chamomile, and touts their use of local ingredients. (The other most similar gelateria I can think of is Dolcezza in Washington, D.C.).

During this visit I tried a cup of salt and tahini. Salt? Salt. Is awesome. Creamy, milky, sweet goodness with a hint of saltiness to enhance the non-salty parts. Can we popularize this flavor? Please? Thanks. Tahini was fine, but not as memorable. The flavor, while...er, tahini-y, was pretty mild. I expected a deeper sesame flavor. I WANT TO BE PUNCHED IN THE FACE WITH FLAVOR; IS THAT OKAY? 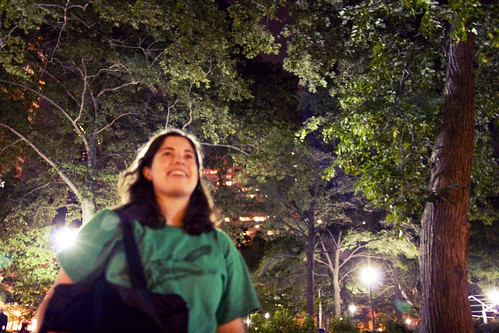 Even better than the gelato was the company. Alex and I ate our gelato in Rittenhouse Square with my old friend from high school, Lisa, and her friend, Mel. I don't know how to express their awesomeness in mere words. You need like...fireworks and explosives. Because life doesn't get much more awesome than when things blow up. 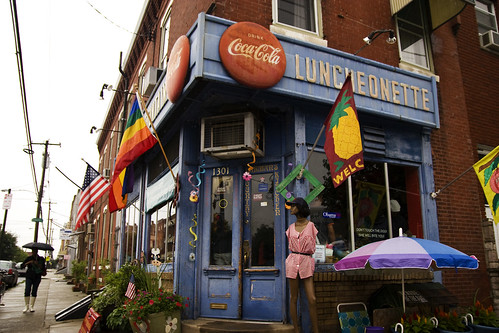 Per my ritual Saturday in Philadelphia, Alex and I started our morning with breakfast. Carman's Country Kitchen sounded quirky (the sort of quirky that involves phallic objects and signs that say "She Put The Cunt Back Into Country") and possibly tasty with its small four-item brunch menu that changes weekly. 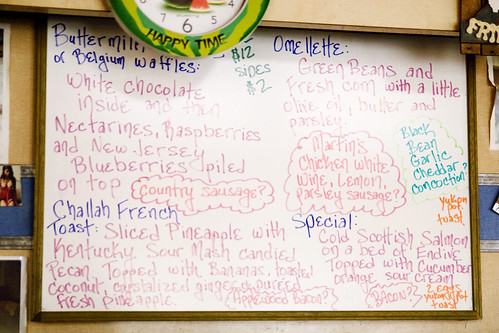 Given the choices of waffles, French toast, an omelette, and salmon, the choice was easy: SWEET CARBS. (It may not have been the best deal though considering every dish was a hefty $12. But whatever.) 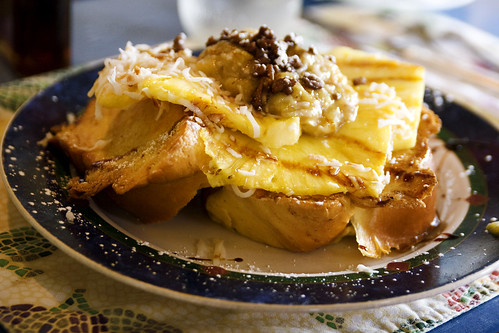 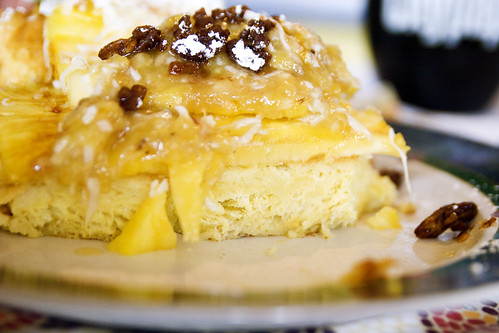 The challah French toast came with pineapple slices, Kentucky Sour Mash candied pecans, puréed pineapple, bananas, toasted coconut, and crystallized ginger. Overall, I thought it was okay. Not $12 good, but interesting, even if I thought the many flavors in the toppings failed to result in the most harmonious combination. The bulk of the topping, pineapple purée, didn't do much for me and the toast, while perfectly fine, was bested by my last Philly brunch at Sabrina's, which I suppose had the unfair advantage of being filled with a thick layer of sweet cream cheesy goodness. Toast alone, Carman's fared better. Belgian waffles were topped with sliced nectarines, raspberries, and New Jersey blueberries. There was supposedly white chocolate inside the batter, but we didn't taste any. Either we got defective waffles or the white chocolate was just really hard to detect. The fresh fruits were delicious, especially the nectarines, but the waffles were just alright. I should've heeded the words in my post about Greg's awesome waffles, which forever ruined all subsequent waffle-eating experiences. After brunch, Alex brought me to the Philadephia Museum of Art for a personal tour of its many art-filled crannies that I knew nothing about because I am a complete art history n00b. Alex works at the museum and is a art history grad student. So. You know. In exchange for feeding him pizza, he edumuhcates my feeble mind.

Oh yeah, so what is he looking at up there? 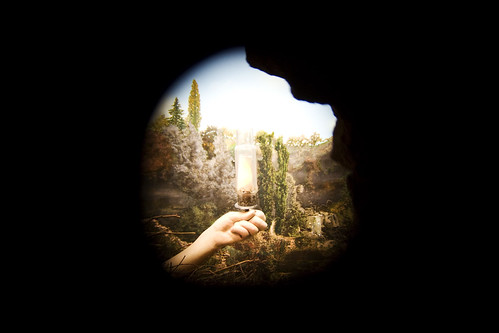 Girl lying in the grass. Specifically, it's called "Given: I. The Waterfall, 2., The Illuminating Gas" by Marcel Duchamp. I wouldn't have known it was there if Alex didn't show it to me, and it would've been a shame to miss. The funkiness cannot be captured in photos; ye gotta get your face into that door and look in yourself. 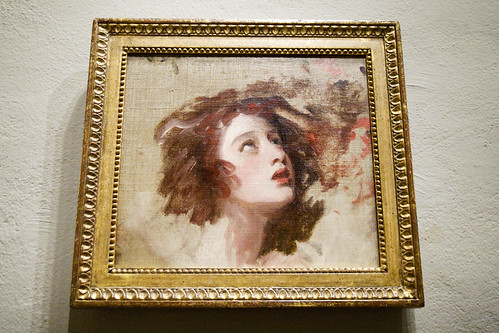 I generally stroll through art museums too quickly to fully appreciate anything—most pieces just don't catch my eye. Except for the one above, "Portrait of Emma Hart (later Lady Hamilton) as Miranda" by George Romney, which stood out among the other paintings for ...I don't know. It felt more alive and dreamy than other paintings, besides that it immediately reminded me of Diana's work. 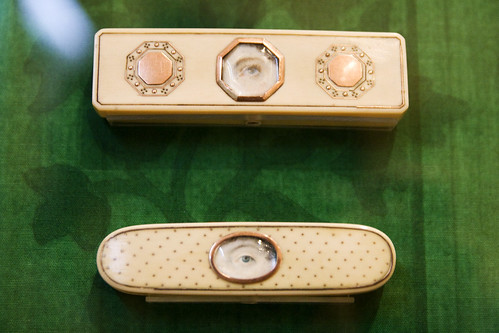 We also liked the section of jewelry and accessories decorated with peoples' eyes. I saw it's time we bring this back into popularity. Mostly so I won't look creepy wear a photo of Alex's eye around my neck. 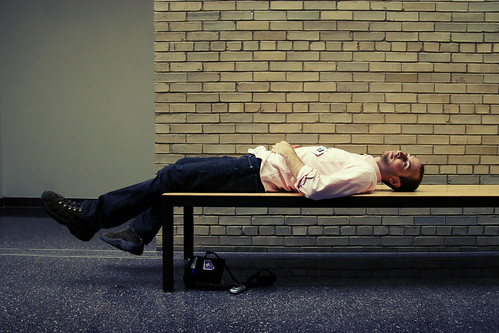 For no reason besides I think it looks cool, here's a photo of Alex on a bench. Heavily photoshopped to look awesomer. 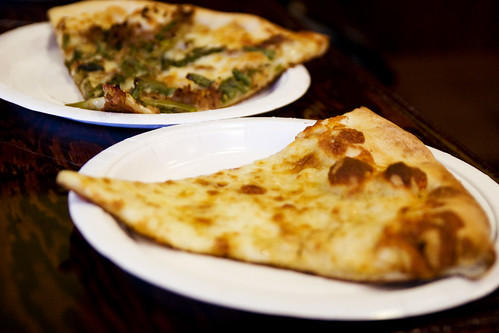 We grabbed a quick lunch at the nearby Luigi's Pizza Fresca. I nommed down a slice of white (oh, how I love my cheese-blanketed breads) and asparagus and beef. They were alright. 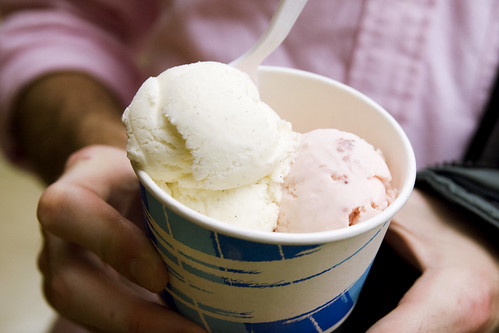 For dessert, we shared a cup of vanilla and strawberry Bassett's ice cream from Pumpkin Market, a small gourmet food shop. And here's where I bring up "sort of dumb thing that sort of bothers me": While labeled as a two scoop cup, the cup really contained four scoops. COUNTING SKILLS, WHERE ARE YOU? Not that I think they can't count (other places do this too); it just seems like it'd make more sense to call it a "medium" instead of labeling it by scoopage. 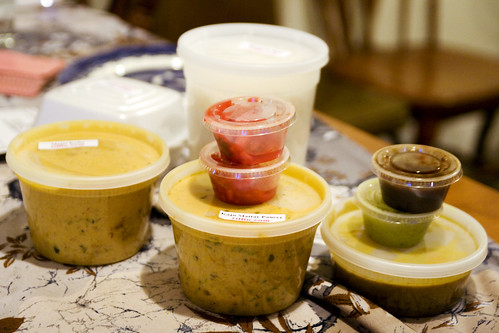 The weather was too fugly to warrant a night on the town (besides that we were tired), so we ordered delivery from Alex's favorite Indian restaurant, Tiffin. I definitely should've ordered something spicier than Kaju Mattar Paneer, paneer and peas cooked in a cashew-based sauce, but it was satisfying enough, and probably enhanced by the meal's visual accompaniment: The Mighty Boosh, season 1.

I'm addicted to travelling right now. So good to get away sometimes.

Aren't those a bit epic for breakfast portions?

kim: That's how I feel when I leave NYC...but then I get back and life returns to normal in like 5 minutes. Doh.

SuperChomp: You should be able to get four flavors, but I'm pretty sure we were only allowed two. I've only been to once ice cream shop where they said they'd fit as many flavors into one scoop as you want; one scoop was THE SIZE OF A BABY'S HEAD (okay not really, but it was huge). Anyhoo. Four little scoops is more ice cream than we wanted, I think. That's like an XXL cup in France, hehe.

Yay Capogiro! Sea salt is one of my favorite flavors. You MUST try the avocado and also the burnt sugar. Mmmm.

Hey Robyn, I used to work at a pretty popular NYC ice cream joint. Our single scoops on cones surprised people because we scooped two balls on top of one another for two reasons: we can give customers two flavors and because it's easier to eat than one giant blob on a cone... But it was still "one scoop" bc it was the same amount of ice cream that would fit in our one scoop cup. A one scoop cup is actually a 6 ounce cup (or something like that, I haven't worked there in nearly a year) and if you look at a standard ice cream scooper..... it's not that practical to scoop 6 ounces in one scooping motion (although you can if you're able to eye it well enough).

Does that gelato look gorgeous or what?

Of all the things we've learned so far at culinary school, we have never covered gelato. A serious oversight in my book!

That French toast does look heavenly but maybe not $12 worth of heaven. I love the trip to the art museum and I'm impressed that you were able to make it (and not fall asleep after that fab brunch)!

Ben: Ahh, two flavors I haven't had! I shall try them this weekend. :)

Elizabeth: HAHA, not too confusing..I get it. :D Makes sense to scoop two if you're offering two flavors, but in this case we got four scoops and got..two flavors..or maybe we were allowed four and the lady didn't say that. Hm.

At Sundaes and Cones, one scoop is farkin huge and they don't allow more than one flavor. Rather dumb. That's one thing that prevents me from going there. Chinatown Ice Cream Factory allows two flavors in one scoop. Basically, I think..instead of calling it a scoop, just call it a small. Or whatever. Because it depends more on the size of the cup, not being a..scoop..thing..AH WHATEVER I've put too much brain power into this.

In France, one scoop is really one scoop and it's the size of a golf ball. ...okay, maybe a little larger. But man, so different.

CSC: That sucks; they should teach you! Not that it's very hard, but I've messed up ice cream base before...oops.

Ms. Blake: After the museum we were pretty pooped. AKA NAP TIME.

Wait a sec, Robyn. Were you (or was Alex, or anyone else for that matter) able to get your/his/their hands on a Mighty Boosh DVD that is NOT euro-formatted? My husband became obsessed with The MB a few years ago and we were able to watch it on YouTube back then, but alas, no more! We've tried to find the DVD but it appeared not to be available in U.S. format (meaning playable on normal U.S. DVD players). Help! Please tell me your secret, please!

Sara: I asked Alex and he said...we weren't watching an official DVD. Ahems. But it looks like this DVD is US-friendly? Just came out last month..ooh..

You are so right, Robyn. I guess they finally decided we needed it over here in the states. Thank you so much! I will for sure be ordering this.

i used to work at a coffee shop that served ice cream. i hated having to scoop because i have no arm power and frozen things are just that, frozen. they refuse to budge without muscle. so i usually ended up having to scoop several baby scoops into the cup to be the equivalent of one normal scoop. perhaps you just encounter a lot of weak, weenie scoopers?

Oh hey, i live in philly.
and i love Capogiro. it is my absolute favorite lunch place. they make these delish turkey and greenapple toasted panini sandwiches. they're basic, but yummy.