"I think I'm up for Financier, followed by Adrienne's, and then Al Di La...and maybe ice cream at Blue Marble if there is stomach room?"

When I read Kathy's suggestion in our email exchange with fellow food lover Ray, I thought, "Pssht, that's way too much to do in once night." (To quote my less eloquent email response: "HOLY CRAP HOW ARE WE GONNA EAT ALL THAT..")

But I was wrong. So very wrong. First rule of eating with Kathy YL Chan: Do not underestimate the power of her black hole of a belly. First rule of eating with Ray: Do not underestimate the power of having a car, which comes in really handy when you wanna hit three neighborhoods in one night. Ray's car combined with our collective digestive powers brought us from the Financial District to Boerum Hill to Park Slope for a most gloriously gluttonous night that may never be repeated because I can't promise that the ol' gag reflex won't kick in next time. After meeting up at Financier and deciding that we didn't really want any pastries (besides that we had three other places to hit that night), we went down the street to Adrienne's Pizza Bar, a place I had been meaning to try since 2005 when I actually lived within walking distance. But then I never did. For some reason I was loathe to traveling south of my dorm, always opting to go north to Chinatown and beyond. The Financial District is not really a happening place for college students. (Not that Chinatown is either. I just love it there.) I will say that Stone Street and the surrounding area is quite beautiful. I feel like there must be history oozing out of every brick and window and square foot of pavement. Not that I know any of it because I suck at history. 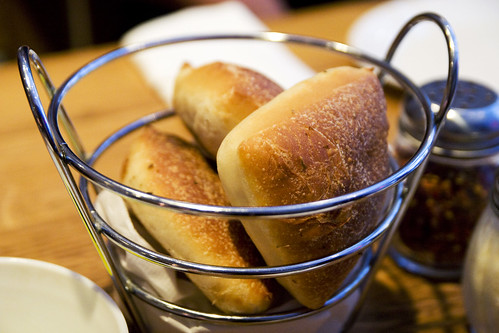 Second bite of the night: PIZZA. More specifically, old fashioned pizza with sausage, old fashioned being the rectangular one. They also have round pies, but that's less interesting. NO BORING ONE-SIDED PIES, DON'T DO IT. FOUR SIDED PIES ONLY. (WHY AM I SHOUTING.) 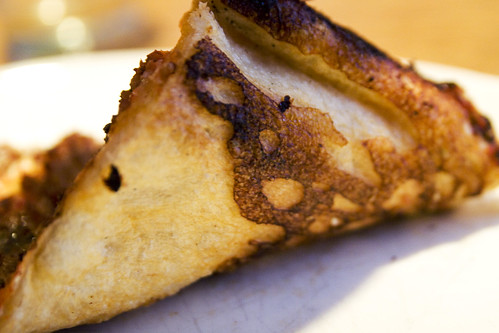 We liked it. I liked it. I forgot why I liked it. But you have photos along with my thumbs up. The thin crust was soft and crispy in the right places and there was nothing offensive about the toppings. All good here. I was sad that we couldn't eat it all since we still had a lot more eating to do. 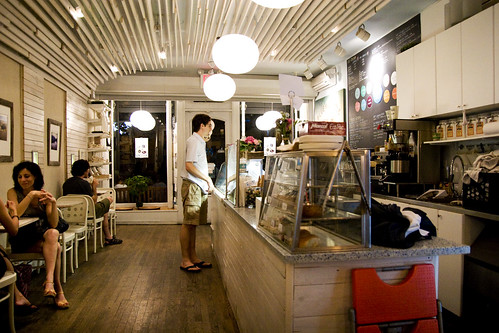 Blue Marble Ice Cream is known for being one of the best ice cream shops in the city with the additional pluses of being organic and eco-friendly. Although I will probably always prefer gelato over ice cream, I would recommend checking out Blue Marble if you had to visit any one ice cream shop. (For gelato, I'd say L'Arte del Gelato and Otto.) We shared three mini scoops of green tea, dulce de leche, and cinnamon—all good, although dulce de leche was my favorite. Blue Marble stands out for having ice cream that actually tastes like what its flavor is (yup, novel idea). Not too sweet, nothing fake. The texture is also great—smooth and creamy. It's reasonably priced for what you get and having the choice of small scoops is relieving in a world where a "small" scoop can be the size of a bloated hamster. Adrienne's was our appetizer; Blue Marble was our non-cleansing palate cleanser. Our main courses (and then some) were found at Al Di La, Park Slope's seemingly perpetually crowded and beloved Italian joint. The main restaurant was too crowded so we hoped around the corner to the quieter and less crowded wine bar, where you can order the same food as in the main restaurant. 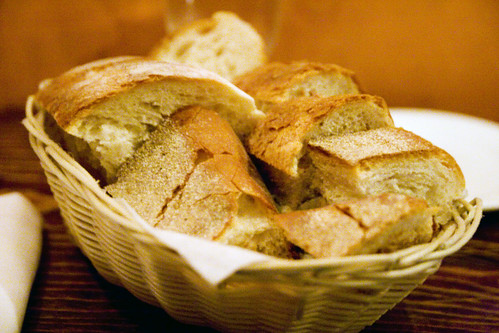 Bread: It's bread! It's good. Because you slather butter on it. Seppia and Oxtail: Stewed cuttlefish bits, oxtail bits, garlic, and chili in a mound of creamy polenta. Creamy, heavy polenta. Filled with a thick sauce featuring meat of the land and the sea. Oh. Boy. This was great, but just a few spoonfuls was enough to send us into food comas. And we were still on appetizers. 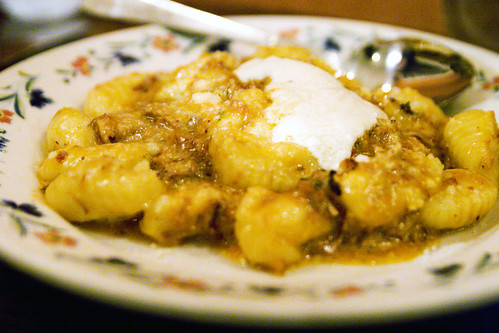 Gnocchi special: I don't have a written description of what was in the night's gnocchi special, so I'll take Kathy's word for it: beef ragu and fresh ricotta. My stomach was going "ohhffuuuckwhat" by this point, but I ate it because I can't resist soft potato pasta plops. 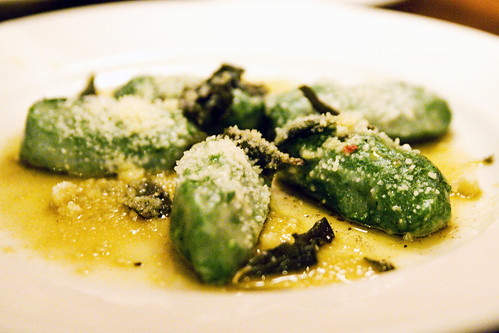 Malfatti: Swiss chard and ricotta gnocchi with brown butter and sage. Sage and brown butter is a beautiful, intense combination—I got a blast of fatty sagey goodness just by licking my fork tines that had only graced one of the fried sage leaves. The light ricotta-based malfatti plops had a slight vegetal flavor of swiss chard. 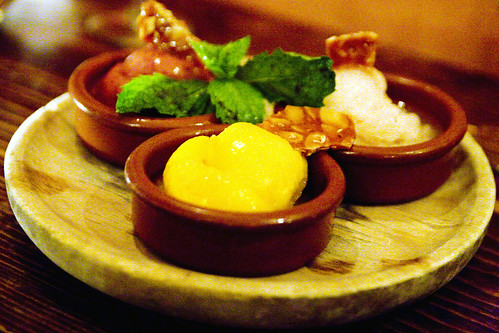 Sorbet trio: Pear and prosecco, mango, something with berries and/or plum? Whatever the flavors were, they were all...awesome. Strong and not too sweet. And a great thing about sorbet is that it doesn't take up any stomach room. None at all. 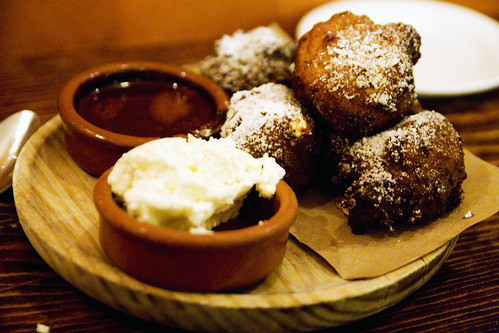 Ricotta fritters: These, on the other hand, do take up stomach space. But they're so good that it doesn't matter if your stomach is as stuffed as ours were; you'll still eat them. Multiple ones perhaps. Because your stomach will widen to accommodate these fried plops of light ricotta-based cloud something or others, or your brain will somehow ignore that your stomach is overfilled. 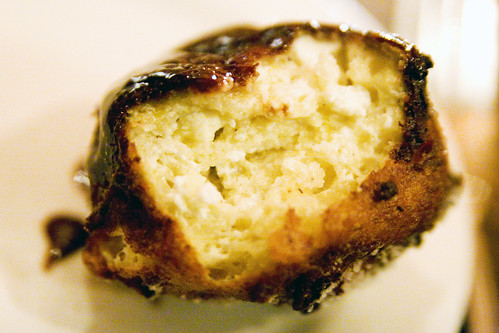 Kathy said that they tasted like malasadas, the famed confection of her alma mater, Punahou. I couldn't tell you how many times I've heard her talk about the awesomeness of malasadas. If they do taste like these fritters, then I can see what all the fuss is about. Crisp and creamy and lightly sweet, and even better with the accompanying whipped cream.

And then I waddled home. Happily. (Actually, Ray drove me, but aside from that, I waddled.)

Thanks so much to Ray for treating Kathy and me to NIGHT OF TASTINESS. There will be more to come.

You missed the "orgasmic" lasagna at Al Di La. These are the words of my girlfriend, not mine.

What-the-crouton!? I guess it falls under the general requirements of a crouton, but that certainly doesn't look like my mental image of a crouton...
The cuttlefish and oxtail combination sounds intriguing; I can't imagine what it would taste like at all. However, polenta (and gnocchi actually) for the wins.
Sorbet! Absence of dairy might be the main reason I love it, but when it's done right, you can get some really awesome clean, light flavours

Also, kudos for taking on an impossible looking food adventure. Sounds like a great idea to me ^_^

That salad with the kale looks almost identical to the one at Il Buco (which is the best salad I've ever had, save for maybe the Caesar at Zuni Cafe in SF.) Someone is plagiarizing food.

if you're ever in p. slope again let me know :) we can meet up for some yummy food.

Thank you once again for the wonderful drool-inducing food pron. *bow*

Wouldn't it be wonderful if there was a way for us to taste all this glorious food via the Internet? ^_^

SuperChomp: I couldn't really describe what the polenta dish tasted like either. It was comforting. And nice. And filling to the max.

I was gonna say "Absence of dairy is why I wouldn't like it," but when sorbet is good, it's really goood. Refreshing in a way that the dairy-logged stuff can't compare to. ;_;

Sarah: RUH ROH (I said that like a dog saying "uh oh"...I have no idea why I felt inclined to do that). I should try Il Buco some day. Although someone would probably have to take me there.

Mike: I live pretty close to Park Slope, but don't eat there..much ever! If you have recs I'd be up for eating!

Ed: You're welcome! I wish I should shove this stuff through to your screen. Alas.

how often do you embark on these eating spree? elastic pants would definitely help. :)

You need to go back to Adrienne's for the to-die-for antipasto platter. I hope you at least noticed the beauty of the antipasto bar when you walked by.

Oooo-mi-god, what an amazing feed!!! How much food-based pleasure can a person absorb in one evening? I want a plateful of that malfatti right now, dammit.

Kim: Not too often! But I would go beyond hte elastic pants and say NO PANTS, wear a dress. ;)

june2: I sure do love croutons that are HUGE CHUNKS O BREAD.

Kathee: I DIDN'T NOTICE! Crap. Okay. Thanks for the rec!

Margaret: Unfortunately, there is a fine line between "yeah I feel so awesome and satisfied" and "I feel gross and I can't...move." I think I just about reached the latter. ...BUT IT WAS WORTH IT YEAH!

Hello, I am currently trying out for a writing position and need to publish a few mock blog posts. One of these posts will be on artisanal ice creams and because of this I mention Blue Marble. I love your shot of the shop, would it be possible to use it? I'll definitely credit you or link back to you if you are ok with it.
Thanks,
Sarah