When you know you're going to attend an all-you-can-eat pizza party for dinner, you should probably be careful about what you eat for lunch. Maybe just stick with a salad or a piece of fruit. Or water. Or air. 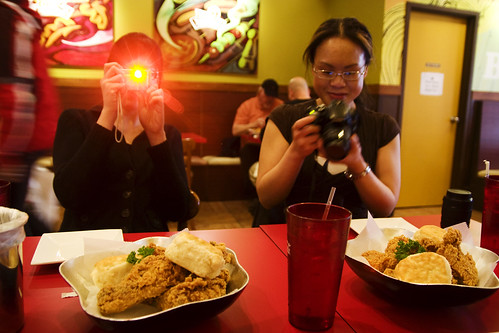 I blame Kathy and Tina. ...Actually, it was more Kathy's fault. But I can't really blame her considering that it was probably my fault for giving her a fried chicken craving in the first place.

See, what happens a lot (and by "a lot" I mean "almost every morning") is that we'll be chatting online and I'll mention a food that I wouldn't mind eating. While my thoughts will easily wander onto something else, Kathy will instantly get a craving for whatever food I mention. A serious craving. The kind that can linger for days. Hell, I've seen her have cravings that linger for months (pie and poutine—not together). You probably shouldn't talk about food around her. I met up with Kathy, Tina and Helen at BBQ Chicken & Beer, so far my favorite America-style fried chicken place in the city. If the name confuses you, BBQ stands for "Best of the Best Quality Chicken." A silly name, perhaps (in addition to being difficult to google), but not far off the mark. Their fried chicken—which they tout as being deep fried in extra-virgin olive oil—has a thick, crisp golden skin and tender meat that acts like a sponge of...chicken juice. It's super moist, basically. And if you leave it out for hours (we've done this at work), it still tastes really good. Not that you would leave it out for hours. The accompanying fluffy, buttery biscuits probably won't last for hours, so eat them right away. 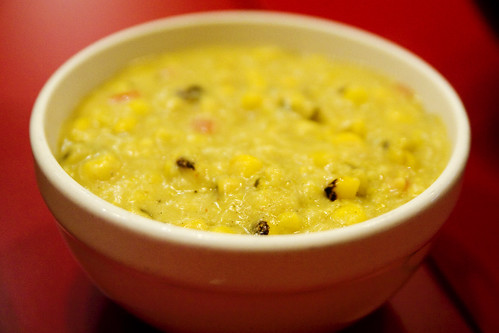 The thick-n-chunky spicy creamed corn was...unsurprisingly, spicy and creamy. Just a little spicy though, nothing of the fire-breathing sort. 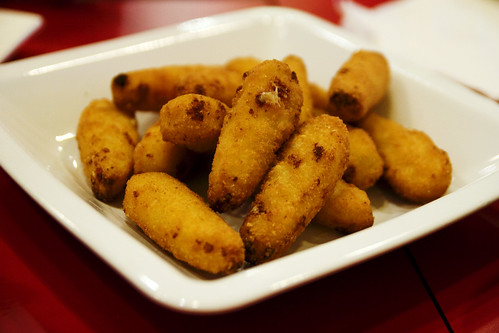 And then there were pepper munchers, which despite containing the word "pepper" didn't appear to container any pepper matter. Take a closer look. A better name for this would've be "deep fried cheese nubs." They weren't like mozzarella sticks where there's a discernable chunk of cheese encased in fried batter; rather, they were crispy nubbins containing some melted cheese goo, along with empty space and...potato? Maybe some chopped pepper bits? I don't know. I just don't know. It was an unintentionally elusive dish.

Our food came uncharacteristically quickly; my previous experience with BBQ Chicken involved having to wait a long time. The waitress told us that our food didn't take forever because the owner was in, making lots of chicken for the lunchtime crowd. Dinner might not be as fast.

ugh that stuff grosses me out hardxcore. maybe it's from all the KFC stories in the newspapers. a fucking treasure hunt, those bucket of wings are...

Argh. Now I have a fried chicken craving...

hmm, i wonder if the claim about the extra-virgin olive oil is true. the flashpoint is so low it's a very unusual oil to fry with. it's also super-expensive.

Sheela: Ah, I didn't have a shot from that meal, but here's a previous one!

Olivia: NOOOO OMG NOOO NO LOVE FOR THE FRIEDNCHICKEN!

Mousie: That's what I was aiming for.

Tristan: I don't know! I thought those were the reasons most places didn't use olive oil. My googling didn't get me any different info on BBQ Chicken's frying practices, though. Maybe lower grade olive oil would work, but extra-virgin?...euh.

I think you could deep fry with extra virgin olive oil if you combined it with an oil or clarified butter--something with a higher smoke point.

I had a fried chicken craving for a long time until I made my own last week. Now I'm building another friend chicken craving. Those pieces really do look huge--like fried goose, maybe. Either way, it looks really fraggin' good.

I must have a filthy, filthy mind.... am I the only one who thinks that close-up of the pepper muncher looks pornographic?
- S

Mmmm... OMG that looks good! It's time to start saving up for a trip to New York.
And I can't wait to read about the pizza gorging. Why don't I eat delicious food more often?

I could eat fried chicken any day of the week! Actually last night we made fried DUCK at home (Kylie Kwong recipe) and it was superb! It was asian-style with a sour plum sauce, not good ol' American-style, but hey, it was fried and delicious, and had about an obscene amount of fat on it. Sign me up anytime!

Julie: I've never made my own fried chicken before. Actually, I've never deep fried anything in my kitchen! :[ ...Or. Maybe once in my life. But it was so long ago I can't remember what it was. Buh well.

Well now I can't look at it with a clear mind. Waaah!

Maja: Oh, on the days I don't eat delicious food I eat the most boring stuff in the world that you will thankfully never read about. So don't feel bad. (pat pat)

Kathy: I DIDN'T MENTION CUSTARD! THAT IS YOUR DOING! YES.

Erin: Fried duck! I haven't had that. I want that. Yes. Please.

Ah I love BBQ Chicken! I think I like the teri-gold wings more than the regular chicken, although the regular chicken IS delicious. In addition to the distinct flavor of being cooked in olive oil, it has great flavors of teriyaki and garlic and is dredged in rice flour. Delicious. You should try it.

Oh man, I can never keep a craving, they always last about a day and the tomorrow something else looks super delicious. Was it scary digging into the creamy corn? It just looks... wrong, but creamy corn is almost always yum.

Girl you know how to make me hungry.
Fried Chicken is hands down my favorite food.
I LOVE fried chicken and this entry makes me want to go to this place very very badly.
Goodness, now I have to try this too.
:)

I have had a craving for fried chicken for months. In fact, I was craving it and thinking about it this morning and then I went to this post, argh!! I made some oven fried chicken with panko last week. It is just not the same. I want chicken.

I am not giving into your temptation. Think yoghurt...think granola....carrot.....lettuce

What about fried chicken on a salad? :p

I really shouldn't read you blog right before I'm about to go running... Because... Will I have fried chicken after running? No. Maybe I can make the creamed corn. It looks so perfectly fried!

Joseph: Ah, I haven't tried the teri-gold wings. Next time!

Danny: IT WASN'T WRONG; IT WAS SO RIGHT. Actually...maybe it was a little heavier than I would've preferred, but it was full of delicious dairy fatness, so I won't complain.

Ulla: I'd love to know what you think of this place! I don't know what my absolute fave food is, but fried chicken is definitely up there. You'd be crazy not to like it. Unless you don't like meat...in which case...hm.

Cindy: Using an oven ain't the same as a bit vat of hot oil, that is true.

Christina: I'd eat that! Hell...yeah.

Man, you're going running? I don't think I've done that in years. I mean, for the hell/fun of it. It's a bit sad.

you've never deep fried anything? then you're missing out on one of life's great joys.

that's some good looking fried chicken. why aren't we friends? we should be eating chicken and biscuits together.

Wow, this post reminded me that I have not eaten fried chicken in FIVE YEARS. That is too long to wait, seriously. And lunch is in fifteen minutes.

Off-current-topic, but I discovered your blog earlier this week and loved it so much that I went back and read...allllll...the entries. From the beginning. You are an amazing person, and I love your writing. It was like reading a great novel about food and never wanting to put it down...except I don't have to, as long as you keep posting! If you ever decide to visit Madison, WI, we have many delicious restaurants. I wish I had someone like you to visit them with.

Jenni: Five years? FIVE YEARS? What? Why? WHY!?

...Actually, I wouldn't be surprised if I had had a 5 year fried chicken-less stretch. During the vegetarian/hard core dieting period. Even now I can't say I eat it that much. But five years...hm. Get back on that fried chicken horse!

You read all my entries? holy! Jebus! You get a prize! A virtual ribbon! [ding!] There it is. That's really impressive and I'm honored you found my writing that interesting because, honestly, the early stuff was like brain farts. It still kind of is. Um. But yeah! If I'm in Madison I'll hunt you down, sweet!!! ^_^

What a delicious dishes I've never seen a plate that makes me feel so hungry on Internet like this.