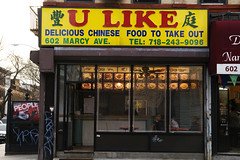 "Do you want to get some dumplings?" asked John.

"OH SWEET JESUS YES!" was my internal reply, although I probably said something less frighteningly enthusiastic like, "Um...sure!"

Three weeks ago when I went to John's apartment in Brooklyn (Bed-Stuy) for an afternoon of movie watching, I skipped lunch since I had woken up so late and—by that point—figured I could just stave off caloric intake until dinner. And while I could've waited until dinner—I have the ability to will my appetite into dormancy for long periods of time if I really want—the prospect of dumplings was hard to resist. (And for anyone who's worried about how unhealthy it is to eat like that, trust me, I already know. But when I'm not hungry, I just don't want to eat. I think this is why I'm not obese. Yet.) 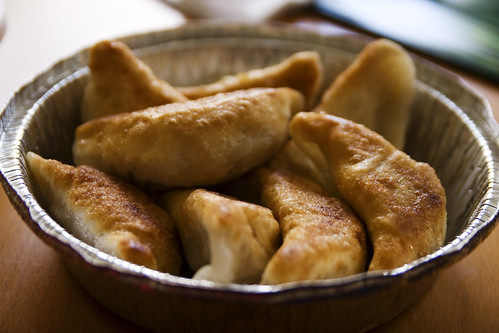 He made a call to the neighboring (as in, a less than 10-second walk from his front door) Chinese take-out, U Like (we need more restaurants whose names resemble the lingo of tween girls), for an order of fried vegetable dumplings. And, true to the name of the restaurant, we did like. For just $3.75 we had a filling snack of eight fat dumplings made of thick dough—a bit crisp on the outside, soft and slightly chewy on the inside. I forget exactly what the filling was made of, but I would guess some generic shredded vegetable mix. Cabbage, carrots, etc? There weren't the kind of dumplings I would buy frozen and eat at home for dinner—those are usually the thin-skinned type—but they made a nice snack. John let me have all the sauce—some kind of spicy soy sauce thing—not because he didn't like it, but because, as he had discovered from previous experiences, he was allergic to it. What ingredient in the sauce caused his lips to swell up? We have no idea. I ate it without suffering from inflammation, but you might not be so lucky. And on a totally un-food-related note, I met up with Mare that night for eating, jumping, and other favorite roboppy activities. If you've been reading my site since my semester in Paris about one and a half years ago, you may remember Mare, a fellow American student in Paris, as one of my best friends there and in general, just one of awesomest living creatures in the world. When she said she was visiting NYC from her current home near Boston, we had to meet up...and take jumping photos (courtesy of John). 'Twas an exhilarating moment of gravity-defying fun. I just thought I'd share that with you.

(And if you're curious, dinner was eaten somewhere in between the dumplings and the jumping at Cho Dang Gol. Don't worry—I can haz a sufficient number of calories.)

What is the Chinese name for dumplings?

I know in Japanese in gyoza and in Korean it's mandoo, but I don't know Chinese.

Maryo - Apparently it is jiaozi.
http://en.wikipedia.org/wiki/Jiaozi

Marvo: Jiaozi, although there are other names depending on how the dumplings are cooked. Although the name is familiar to me, growing up my family mostly referred to them as...dumplings. (Unlike buns, which I always remember calling baozi. WHY DIDN'T I JUST SAY "BUN"?)

Sukwoon: Ahh, ye beat me to it as I was writing!

Hey! This is very irrelevant, but that dress looks really awesome on you. Now I must trawl eBay for a similar one since I'm in Australia :)

Whoa Robin I think that picture is the most dressed-up I've ever seen you on the blog. Was there a special occasion? Zomg tights?

Wow, those dumplings look awesome. I wish I could get those locally. I usually have to wait until a dim sum trip to gorge on them.

The problem with them in Cantonese is that you can't read it like the Mandarin as "gao ji", it's called "wor teep", hence the struggle I had one time when someone walked past with a plate of them and I bumbled "Dumplings! Gyouza! Gah! What are they called in Chinese!?"

And before I even saw the above comments, I thought that was a fab outfit. The navy and red look great.

hmmmmm they look so doughy. in a good way.

The dumplings look really good! Bummer about the lip-swelling for John.

"Gao ji" is the general term for dumplings, whereas "wor teep" (or "guotie" if pronounced in Mandarin) specifically means fried dumplings. "Wor teep" is also commonly known as potstickers here in the U.S.

Lee: Thanks! I got the dress from American Apparel and they have an Australian store, so maybe you can get it there. :)

Mike: Hm...yeah, that might be the most dressed-up I've looked on this blog, but I do dress like that from time to time in real life (for no special occasion). ;) Especially tights! Perhaps not red rights though. Hard for me to find bright tights that I like (and ones from American Apparel don't fit me right, euh).

SuperChomp: Ah, I feel like these are the kind of dumplings you only find at Chinese take-out places...I haven't seen em at a Chinese place, at least. :D

Jodie: I've had bad-doughy dumplings from Chinese take-out places, but for some reason these were good! YAY DOUGH, I love you. And yay, another point for my outfit. ;)

Christina: Haha yeah, lip swelling from tasty sauce just sucks, more so when YOU DON'T KNOW WHAT IS CAUSING THE SWELLING.

Jumping photos can ONLY BE FUN, NOTHING ELSE.

Cacao: I've never heard wor teep before! But I probably don't pay much attention to cantonese. -_- Guotie sounds familiar to me.

All the photos look good (yay jumping) but that first shot is fantastic! I love the circles and the sharp angles and the droplets of chilli oil on the container, like it's a little tub of fire trying to burst free.

Maybe I'm reading too much into it. Thanks for making me aware of the distinct lack of dumplings in my day. I'll be crying in the corner.

Those look like the ones I get from Takie Outie (yeah, I know)...so tasty, so cheap, so filled with pork.

I just had gyoza for dinner, so oily but so good , sigh~

I can't believe your semester in Paris was over a year ago! That gave me a shock. I started reading while you were there, and I've been reading since, though I've never commented. I don't read blogs in general, so I hope you feel special. :D

Yas: Thanks for making the photo seem much more awesomer than it probably is... ;) I love overhead shots; I just don't take enough of em cos it usually requires...uh, standing on a chair or something. Johns table happened to sit low enough so that I could take a photo just by standing up.

Rose: Mm, cheap pork dumplings...I've eaten a many of those. :D

Aliisa: I most definitely feel honored! Thanks for commenting. :)

LOL The name of this restaurant used to stand out to me. I used to eat there on the cheap back in the days. Hilarious!

Imani: It stood out to me too! Definitely sets it apart from other Chinese take outs. :)

ohhhh, dumplings. a nice light snack! i have to travel 2 hours for something so exotic (i live in the very centre of nowhere) but its well worth it.

clevermonkey: That is so sad! :( 2 hours = too long for dumpling satisfaction.

You are so right, chinese, always a great idea for take-out.

i don't like fried dumplings but those look fat and delicious

Hoy, my keyboard was typing backwards there for a second which was pretty spooky (left it in below just for the novelty).... BUT I came across your blog via a fruitless search for a song lyric... Instead of fruit I got dumplings. AND I was just inspired to say, from the other side of the world, eat how you wanna and bugger the health aspect. There is something to be said for not bothering if you are not inspired. I'm waiting for someone to invent food cubes for those moments. Then I could just eat when I can be arsed. Cool pics of the jumping too. Have an excellent next couple of moments/days/light years.

Tim: OH MY GOD YOUR KEYBOARD IS POSSESSED!

So glad you could stumble upon my blog. I hope I will update it for another few light years.