[Did I write too many words? Yuuup. Click here to jump straight to the recipe!]

For most of my adult life, I ate out almost every day and reserved cooking for special occasions. It was a perfect marriage of two of my favorite activities: 1) eating and 2) not cooking.

Then I killed that perfect marriage by getting married. After moving from the US to Norway to join my husband Kåre in his home city of Bergen, my eating out and cooking habits flipped. Now instead of treating my kitchen as "the place where I eat snacks over the sink", I treat it as "the place where I cook nearly every day and occasionally eat snacks over the sink." This has less to do with the lack of choices that match up with my cravings and more to do with my current unofficial job title of "freeloading wife/bum," a title that doesn't lend itself to eating out in a country known for being pricey. And I don't mean to complain about the prices—I'd rather pay more if that means people in the food industry can get something called "living wages" (a depressingly foreign idea from an American standpoint)—but it does mean the cost of eating out in Norway compared to in the US makes it more of a treat than a decision I make on the fly because I can't summon the will to dump something in a pot and make it hot.

Over the last two years of living in Bergen, I've dumped a lot of stuff in pots and made the stuff hot. And more! Fueled by a surplus of joblessness and cravings for foodstuffs I can't easily find in Bergen, I've spent hours in the kitchen trying to recreate some of my favorite dishes, as well as squeeze an above-average amount of deliciousness out of each kroner. I make a lot of New York-style pizza (thanks, Kenji!), as well as bacon-topped French toast (thanks, Daniel!), grilled cheese sandwiches (thanks...cheese!), triple batches of white sandwich bread for the aforementioned French toast and grilled cheese sandwiches (thanks, King Arthur!), and other dishes that aren't wheat- or cheese-based. I would never label myself an adept cook, but after lowering my standards I've found myself thinking, "Hm, that tasted not terrible, maybe in the vicinity of good if I squint?" with increasing frequency after taking the first bite of whatever I just made.

(Kåre is far more forgiving when it comes to judging my cooking. He responds to almost everything I cook with "IT'S GOOD, I LIKE FOOD!!!" accompanied by a smile fit for a Golden Retriever, followed by scarfing down two to three normal human servings in five minutes. I'm guessing the main reason he likes everything is because his default hunger level is "I could eat a hippo right now, do you have a hippo, WHY ARE YOU HIDING THE HIPPO." But he's also excessively sweet and would probably compliment me without being guided by intense hunger. A+ husband, also, possibly a dog.) 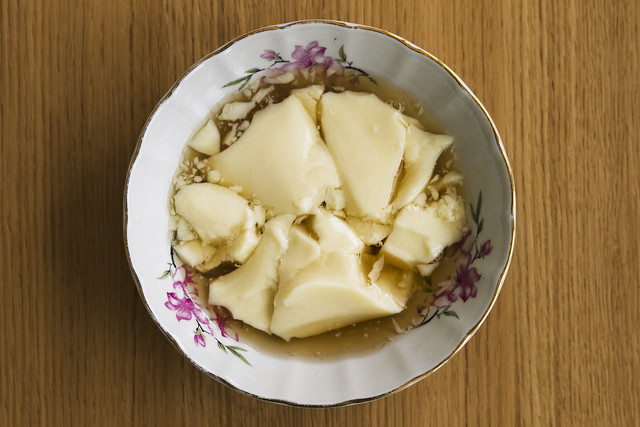 Bowl of homemade dou hua in all its chunked glory.

Out of all the recipes I've tried since moving to Norway in attempts to recreate dishes I've missed in New York or Taipei, this recipe for one of my favorite Chinese desserts, tian dou hua (甜豆花, tián dòu huā), aka sweet tofu custard or soy pudding typically served in a light syrup, is the easiest and most "omggggg this actually tastes like the thing I want it to taste like" dish. Cathy Erway's recipe from her Taiwanese recipe book, The Food of Taiwan, is my favorite kind of recipe, the kind that demands few ingredients and minimal effort, reaching a maximum difficulty level of "dump stuff in a pot and make it hot." To make things even easier for those who don't have access to Asian ingredients, Erway replaced the traditional dou hua coagulant gypsum powder with unflavored gelatin. If the gelatin-enhanced texture is notably different from the traditional recipe, I can't tell. It tastes just as good to me as what I've eaten made by the hands of people who actually have skills. The result is tofu custard with a delicately soft texture that wobbles uncontrollably at the slightest poke and a consistency so light and smooth that it barely tastes like a solid. 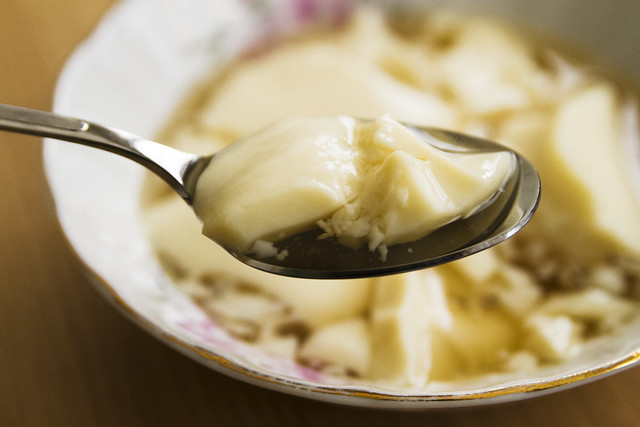 And if you don't trust my taste—which I'd totally understand because you shouldn't—maybe you'll trust Lina, one of my best friends in Bergen. Born and raised in China, Lina has been living in Bergen for the last decade or so with her Norwegian husband (and also BFF of mine and Kåre), Petter. During one of their visits to our apartment, I surprised Lina with a batch of homemade dou hua, not having any idea if she actually liked dou hua but making the assumption that, as a Chinese person, she probably did, and as a resident of Bergen, she probably hadn't eaten it in a while. Any doubts I may have had were instantly vaporized when Lina's face lit up at first sight of the wobbly goods. Just as I suspected, she did like dou hua and hadn't eaten it in a long time. What I didn't expect was what she said after taking her first few bites:

"This reminds me of eating dou hua with my mom when I was a kid!"

I'm not saying she had a Ratatouille moment, but it was one of the closest things I've seen to such a moment in real life. And for all the time we've spent together over the last seven-or-so years of being friends, I knew alarmingly little about her life before she moved to France for art school in her mid-20s. Her reaction led to us having a long discussion about her childhood and teenage years in China, a discussion that would've never happened without the catalyst of dou hua. As we sat in my kitchen talking, she ate her way through two bowls of dou hua.

But you don't need treasured childhood memories of dou hua to want to eat a ton of it. I don't. At least, nothing special enough to reveal itself in a food-triggered flashback. (Most of my treasured childhood food memories fall into the categories of "TV dinners" or "chicken nuggets".) I remember eating dou hua more as an adult, with heartwarming memories such as "that time I ate it out of a small take-out bucket in Chinatown," or "that time I ate it out of a larger take-out bucket in another Chinatown." The last time I ate dou hua before I moved to Norway was at Dongmen Jiang Ji Douhua in Taipei, where I ate it out of a normal-sized, non-disposable bowl (but it would've also tasted great out of a bucket).

Even though I no longer live near any Chinatowns, with this recipe I can eat as much dou hua as I want, whenever I want, out of any receptacle I want, like the adult that I questionably am. You too can harness this power. If you try this recipe, let me know what you think!

I add a couple of tablespoons of sugar to the (unsweetened) soymilk when I heat it up because I like the hint of sweetness. This isn't necessary considering the tofu custard will ultimately be swimming in ginger syrup, but I personally like the custard better this way. I also add some brown sugar to the syrup to give it a bit o' color.

For those who are using packets of Knox unflavored gelatin, 1 tablespoon is somewhere between 1 and 2 packets. 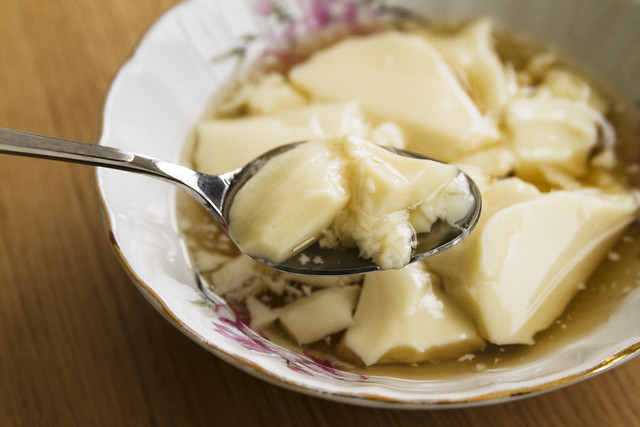 For the tofu custard: Heat the soy milk in a large pot over medium-high heat until it just reaches a boil, turning off the heat as soon as the first bubbles emerge around the sides.

In a medium bowl, stir together the warm water and gelatin until the gelatin is thoroughly dissolved. While whisking, slowly pour in about 1 cup of the hot soy milk. Continue whisking and pour in another cup of the soy milk. Transfer the gelatin mixture to the remaining soy milk in the pot and whisk to incorporate thoroughly. Let the soy milk mixture cool completely. Cover and refrigerate for at least 4 hours (or overnight).

For the syrup: Combine the water, ginger, and sugar in a small pot. Bring just to a boil, stirring to dissolve the sugar. Reduce the heat to a simmer and cook, uncovered, until the syrup has reduced and thickened slightly, about 15 minutes. Strain and remove the ginger.

Scoop our large chunks of the chilled tofu custard to serve in individual bowls drizzled with the syrup.