God jul! Merry Christmas from our oversized heads to your normal-sized heads!

I moved from the US to Norway over two years ago. That means I've spent over 17,000 hours studying the inner workings of Norwegian traditions, habits, languages, and more, information that I then molded into bricks so dense with knowledge that they skirted the edge of gravitational collapse, bricks that I proceeded to lay out with the precision of the most up-to-date robot spine surgeon, resulting in an atomically smooth path of integration into Norwegian societeAHHHAHHAHAHAHA I'm kidding, my "knowledge bricks" are more like rejects from the alphabet block factory where all the vowels are missing, and all the letters are only printed half-way and/or backwards, and some of the blocks are just globs of sawdust-encrusted glue that sort of look like blocks from afar if you close your eyes.

So my integration is going well. Just last week I learned how to refer to the major days of Christmas in Norwegian. Cool! Maybe I should've learned that two Christmases ago when I moved here, but whatever!! Every day is another opportunity to limblessly flop my way up the stairwell of Norwegian competency!!!

For those who are curious about what to call the days of Christmas in Norwegian, I've written this short post listing the names below, plus a bit of info about each day. If you've lived in Norway for a few years and, like me, have only learned these names now, then please, let us share a virtual fist-bump. [bump] 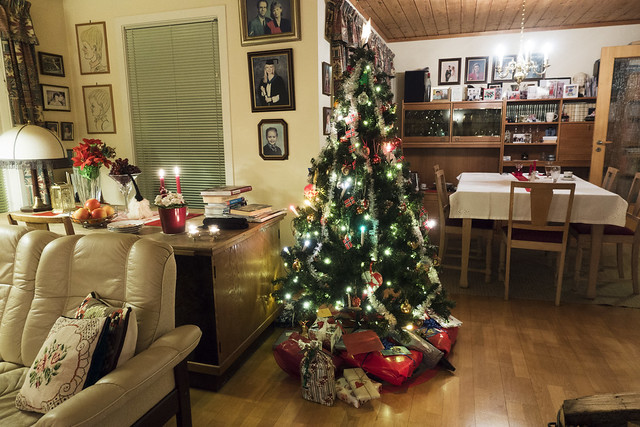 Christmas tree and gifts at my parents-in-law's house.

Lille julaften isn't a day of any major activity—it's still a normal work day—except maybe decorating your tree and doing a last-minute hunt for the perfect Christmas gift at Lagunen a few hours before the mall closes not that I'm speaking from experience or anything.

Julaften, which is usually a half-day of work, is the most important day of the Christmas season in Norway. That is, it's the day when most people put on their "good" outfit, meet up with their closest family members for a big dinner of traditional foodstuffs, and open their gifts. If you're wondering how Santa delivers his gifts, he simply goes door-to-door and hand-delivers gifts to children during the evening, as opposed to secretly breaking into people's homes in the depths of the night while the children are asleep.

Første juledag is a full vacation day. It's more relaxing than Christmas Eve, but it's similar in that it can still involve meeting up with close family members and eating a huge-ass dinner, minus the fancy clothes and the gifts.

Andre juledag is another day off from work. Woo!

Romjul is the time between Christmas and New Year's Day. But in my mind it's when Christmas is being celebrated on spaceships with aliens who want to party Earth-style.

And while I'm talking about New Year's... 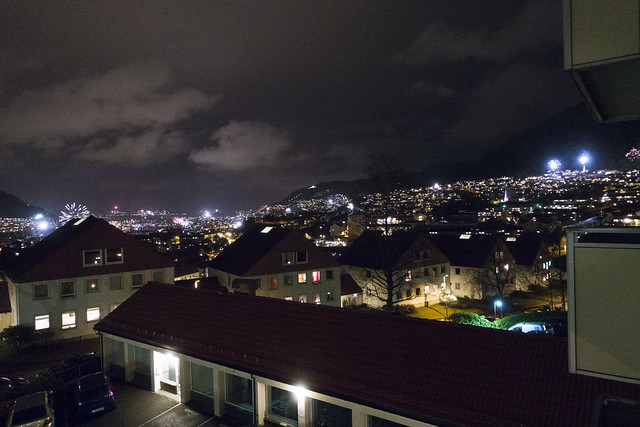 View of New Year's Eve fireworks in Bergen from my balcony.

Nyttårsaften is the night where the people of Bergen (and other cities) go nuts setting off fireworks during the one eight-hour period a year when they're allowed to.

Første nyttårsdag is a day of rest (that is, another vacation day) and, hopefully, not a day when newspapers bear headlines such as, "YOU PARTIED TOO HARD; THE CITY BURNED DOWN".