Hello, smattering of readers! It's been a while. :( Since my last post, I moved out of New York City back to my mom's place in New Jersey, then moved to Taipei. Today's post has absolutely nothing to do with those recent events. Or food. Instead, I'm recapping all the surprise birthday parties I've received over the last five years because...today is my birthday. A meh birthday—the big 2-9, which basically means I'm 30, which basically means I'm 50, which basically means OH NO I AM DEAD NOW. So join me as I focus on the good times, when adulthood was distant and I didn't live thousands of miles away from my closest friends. 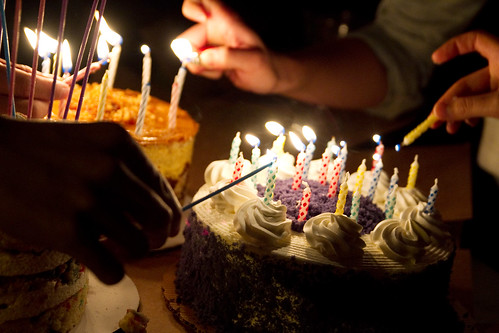 It's not a birthday cake until you set a bunch of tiny fires on it.

I'm not one to demand recognition for my accomplishments, but there is one prize I deserve with utmost fanfare (a nice horn quartet ought to do it). That prize is an oversized gold chalice engraved with "Most Easily Surprised by Surprise Birthday Parties." Under that in a smaller font, "It's Crazy, She Just Never Sees Them Coming!" Under that in a smaller font, "How Did She Make It This Far in Life?"

Here's what I've learned over the last five years of being surprised/fooled by friends in New York City. This isn't a handy-dandy universal guide that lists all the steps by any means; there are other resources for that. It's not rocket science, nor a less impressive science. I'm just sharing my experiences to give people ideas. Use this knowledge wisely on your most unsuspecting friend who enjoys being surprised. You might make her feel like the luckiest person on earth to be blessed with such a thoughtful circle of friends...and after a few years, fill her with self doubt about her ability to think critically about anything.

In this post I refer to the surprisee as a woman because I have lady parts. But you can also surprise guys. It works on them too, probably.

Hijack the Birthday Plans Your Friend Has Already Made 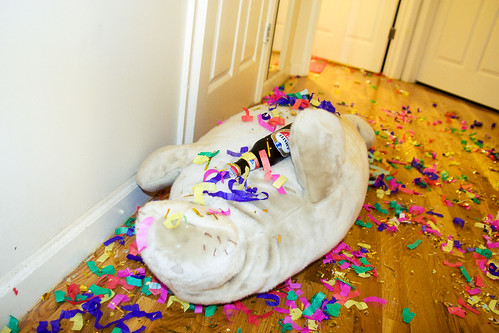 It's not a party until PARTY MANATEE ARRIVES.

Instead of planning a surprise party from square one, it might be easier and less suspicious to tack the surprise onto plans the birthday girl already made, if her plans are easily malleable. I've been that girl multiple times. I LEARN NOTHING.

Surprise Birthday Party, the First: August 29, 2009. My plan was to have a mostly unplanned, small, casual get-together at my apartment with one of my best friends and then-roommate, Lee Anne, plus some other people to be determined. But Lee Anne, privy to my plans (or lack of) and possessing keys to the apartment, secretly invited a group of our mutual friends and arranged for celebratory pizza and pizookies (that is, pie-sized chocolate chip cookies, fresh from the oven, piled with scoops of ice cream—one of the best desserts on earth, surely). The surprise attendees hid in my bedroom, ready to set off a confetti gun when I entered. You can read all the gory details here.

So if you're like Lee Anne and have many mutual friends (and their contact info) with the birthday girl...and keys to her apartment...then you too can pull a Lee Anne.

There's another reason the party was a huge surprise to me; I'll get to that in a later section. 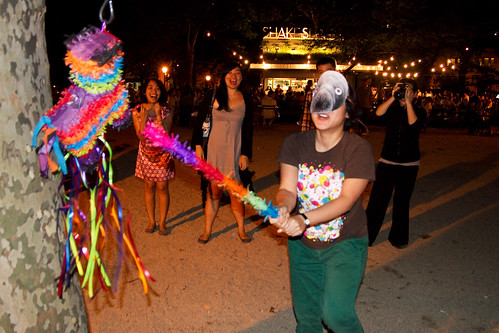 DID I HIT THE THINGY DID I?

Surprise Birthday Party, the Second: August 27, 2010. Unlike in 2009, this year I had actually planned most of the party myself. I sent emails to friends setting a time (7:30 p.m.) and place (Madison Square Park Shake Shack). I ordered a birthday cake from Momofuku Milk Bar. I was ready. And Lee Anne wasn't in NYC at the time, so I figured I was in the clear. TRY AND GET ME NOW, SUCKERRRRRZZZ [thumps chest].

Oh yeah, there's this thing called the internet, and it allows people like Lee Anne to help plan a surprise party from anywhere in the world.

Oh yeah, Tristan, one of my bestest friends, threw me a red herring by telling me he couldn't come to my party. I was disappointed but didn't think it was a big deal nor anything suspicious. In secret, he and my friends beefed up the invite list and brought more party supplies: homemade manatee masks (because I like manatees), a piñata, and desserts. Read the recap here.

The only hiccup was that there were a few stragglers whom I invited to Shake Shack but weren't in on the surprise part. I made things harder for the planners by BCC-ing everyone in my original email. Luckily most of my friends know each other.

Throw Her a Party On a Date That's Not Her Birthday 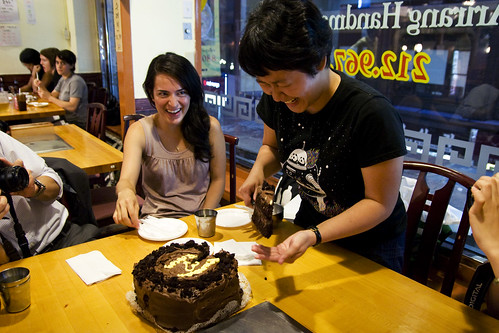 Cutting the cake with Lee Anne by my side.

Surprise Birthday Party, the Half: July 22, 2009. I made plans to meet up with four friends at Arirang, one of my favorite Korean restaurants. No special occasion. When I arrived, there were four more surprise guests and a chocolate cake from Sugar Sweet Sunshine frosted with the message, "Manatees <3 Robyn." Hell yeah, I was surprised. Because it was 36 days before my birthday. Read all about it here.

You can turn any run-of-the-mill dinner into a surprise birthday (or unbirthday) party with cake and extra friends. ...EVERY DINNER CAN BE A SURPRISE BIRTHDAY PARTY! 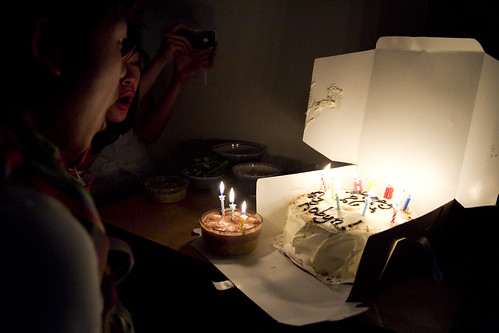 Melissa and I joined forces for this one.

Surprise Birthday Party, the Third: September 1, 2011 (not that long after my birthday, admittedly). This party wasn't "supposed" to happen. It only came about because Hurricane Irene shut down public transportation on my birthday and the original plan to have a joint party with my friend Melissa fell through. I don't remember the exact plans that worked up to me being completely brain-mushed surprised at this party, but I'm guessing I wanted to do something with Lee Anne and she suggested having a small dinner at her apartment with a few friends—nothing out of the ordinary, as she likes to cook. (This party may also fit under the last category, "Make Your Friend Think It's Her Idea." According to the post I wrote about the party, I thought the dinner was my idea.)

LEE ANNE CANNOT BE TRUSTED WITH LETTING BIRTHDAYS PASS IDLY BY [waves left finger wildly in the air, the force of which causes my imaginary monocle to bounce off my face]. Of course, she invited a buttload of people and helped make sure there were plenty of decorations and good things to eat (such as homemade bacon mac and cheese from Noah and a homemade chocolate cake from Melissa). Here's the recap.

Make Your Friend Think It's Her Idea

This is related to hijacking your friends birthday plans, but if you can't hijack, you can try to push her in the direction of the plans you've already made. If your friend is as dumb as I am, she'll think it's her idea. 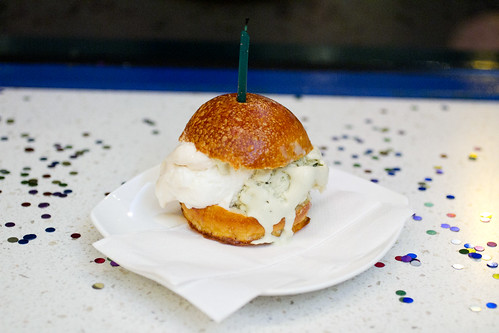 Surprise Birthday Party, the Fourth: August 21, 2013. This two-parter party is also filed under "Throw Her A Party On a Date That's Not Her Birthday" and "Hijack the Birthday Plans Your Friend Has Already Made." After watching a movie at IFC Center with a few friends, we had some time to kill before our occasion-less dinner reservations with a few other friends, including Lee Anne [insert dramatic musical cue], at Kinshop. Eric mentioned being interested in trying nearby L'Arte del Gelato (now Dolce Gelateria), one of my favorite gelato shops in the city. I didn't register that he was pushing me in that direction; to me it was the natural choice for a quick pre-dinner dessert in the West Village. If he hadn't said anything I probably would've gone there.

And what was waiting for me at L'Arte? Balloons and a brioche gelato sandwich and friends—including the ringleader, Lee Anne, of course. FOOOOLED AGAAAAAIN. It took me a too-long while to realize that it was Eric's idea, not mine, to go to L'Arte. I am dumb and he is smooth.

Part Two of the surprise was that Lee Anne had invited a few more people to our dinner at Kin Shop and converted it into a birthday meal I didn't have to pay for.

If this post actually helps anyone plan a surprise birthday party, I'd love to hear about it! Especially if these tactics work repeatedly on the same person. I'm happy to share my trophy with someone else.