This post was originally published on Serious Eats New York a week ago. Am I totally cheating by reposting it here? Yes. But seeing as I'm not terribly disappointed by the quality of this post, and I know not all of you read Serious Eats, I figure someone will enjoy this. Maybe. 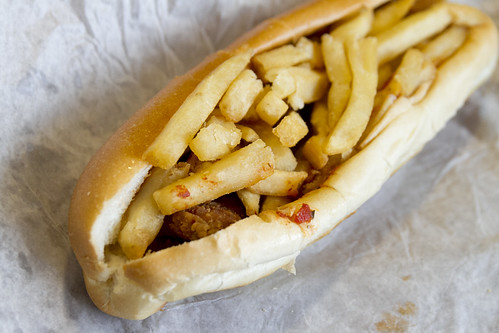 The Fat Darrell from RU Hungry.

'Cause there ain't no doubt I love this land,
God bless the USA.

Lee Greenwood's patriotic crooning doesn't often pop into my head, but when it does, it's probably not for any reason Greenwood had in mind. Unless he wrote those words to behold the majesty of a sub roll stuffed with three different kinds of fried foods. In that case, I totally nailed it.

That fried food-stuffed roll is just one many members of the fat sandwich family. A fat sandwich is what you get when you cross a burger and/or a cheese steak and/or a gyro and/or bacon and/or eggs and/or dump on a sports bar appetizer platter—namely mozzarella sticks, chicken fingers, and fries—and douse it all in a sauce or two. It sounds like a monstrosity from Pawnee, Indiana,* but luckily for us non-fictional folks it hails from New Brunswick, New Jersey, where grease trucks at Rutgers University have been slinging fat sandwiches since the '80s.

* "First in friendship, fourth in obesity." 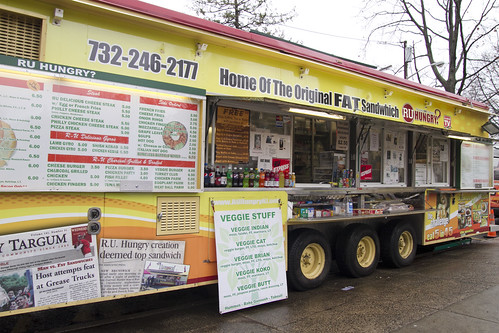 For about 20 years the grease trucks were located in a parking lot owned by Rutgers, but last August the trucks were forced to relocate to make way for a new development. I'm not familiar enough with the grease truck family to know if they've all reopened elsewhere, but I can tell you the most famous of these trucks, RU Hungry, moved about one and a half miles away from its original spot at 11 Nichol Avenue on Rutger's Douglass Campus. 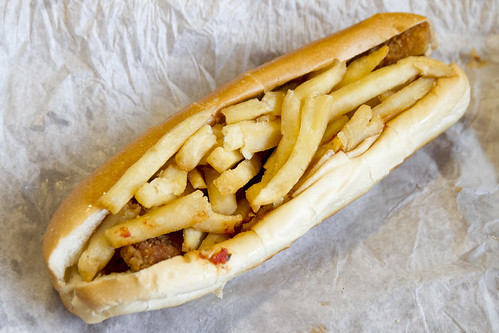 With over 30 fat sandwiches to choose from and no patience to wade through the options, I took the easy way out with RU Hungry's most popular sandwich, the Fat Darrell ($6.50)—a sandwich so popular it has its own website, fatdarrell.com, and a trademarked name. What kind of sandwich is worth all that? A sandwich stuffed with chicken fingers, mozzarella sticks, french fries, and marinara sauce, that's what.

As fatdarrell.com explains, the Fat Darrell was invented by Rutgers student Darrell W. Butler back in 1997, borne out of a craving for the golden trio of chicken fingers, mozzarella sticks, and fries, and a lack of funds to buy all these things separately. Darrell convinced RU Hungry's then owner, Abdul Eid, to pile everything into a sandwich for $4.25. And then a bagillion people ordered it after him because it's one of the best combinations ever. Its popularity has been boosted by plenty of media attention, most notably from being dubbed the best sandwich in the country by Maxim magazine in 2004. 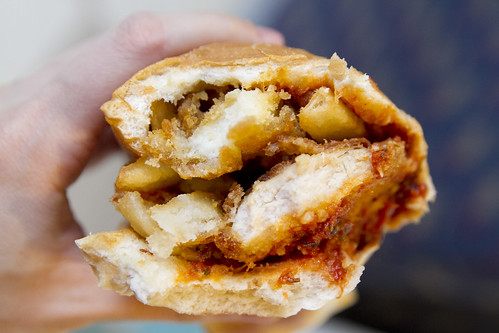 So how does it taste if you're not drunk or high as a kite? As someone who doesn't drink or smoke, I say it tastes damn good. That's what I expected from a sandwich that combines three of my favorite junk foods. I wouldn't say it's better than eating chicken fingers, mozzarella sticks, and fries separately—it's just different. The best, most crucial part was the top layer of super crisp, fresh-from-the-oil-vat french fries. The chicken fingers were satisfactory, standard breaded protein strips, not especially dry or moist. I wouldn't have minded more mozzarella sticks; they got suffocated by the chicken and fries. (Actually, what might be really good is a Fat Darrell Parm blanketed in a layer of melted mozzarella. Or maybe that's overdoing it. Or maybe that's not. [strokes chin])

Does the Fat Darrell deserve the title "Best Sandwich in America"? Come on. No. (Does any one sandwich deserve such a lofty title?) But I would put it on the list of great American sandwiches. And, man, we've got a lot of great sandwiches. 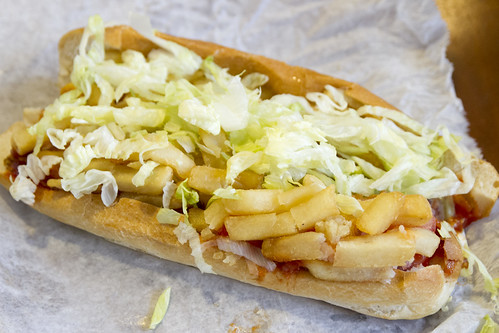 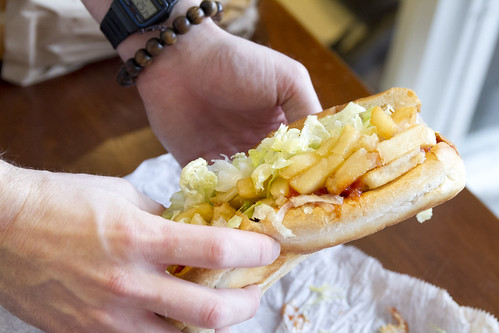 Because there's no reason vegetarians should be denied the privilege of stuffing themselves with excessively caloric foods, RU Hungry offers a handful of vegetarian fat sandwiches. I tried the Veggie Brian ($6.50) made with a veggie burger patty, not quite enough mozzarella sticks, plenty of french fries, and a few handfuls of shredded lettuce, all well lubricated with ketchup and mayo. Overall it's the fries and sauce you taste the most, and that's perfectly fine by me. The shredded lettuce lent a refreshing, light crunch—never a bad thing in a sandwich full of fries—and helped delude me into thinking I wasn't eating something terribly unhealthy. 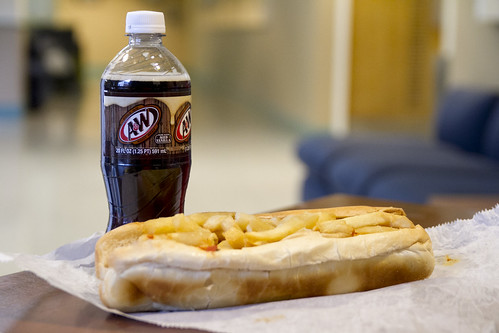 Fat sandwiches are obviously not an everyday food. Maybe a quad-monthly food. The Fat Darrell has been reported to contain 1,718 calories and 78 grams of fat, and compared to the other fat sandwiches it sounds like one of the tamer choices. If you want to go a somewhat reasonable route, you could split one sandwich with a friend and both emerge feeling satisfied...but if you wanted a reasonable meal, you wouldn't be eating a fat sandwich. On that note, my friend and I completely finished our two sandwiches—I ate 3/4ths of sandwich, he ate the rest—and we felt...kind of ok after. Not terrible. Not filled with regret. We just didn't eat much for dinner. 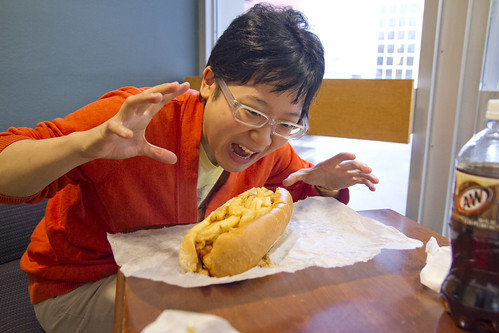 The Fat Darrell + me.

What I don't understand is why fat sandwiches aren't more widespread. Lots of restaurants have the basic ingredients; it's just a matter of stuffing them all into a sub roll. Maybe an intrepid eater has to request a specially made sandwich to get the ball rolling at these unenlightened fat sandwich-less eateries. It brings to mind that false Ghandi quote, "Be the change you wish to see in the world." You can be that change. You can be that intrepid eater. (I'm probably not even applying that fake quote correctly, but whatever.)

Or you could refrain from eating fat sandwiches like a respectable human being. Whatever floats your boat. My boat is full of fat, so it's floating really well. 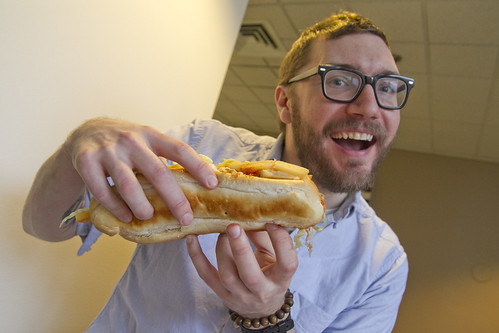 Despite that Tristan doesn't appear in this blog nearly as much as he did in the days of yore, we are still best buds. Special best buds. The kind of special best buds who can comfortably communicate solely through one-word texts that say "butts." This is the big leagues we're talking about.

Tristan is also the kind of friend who will cast aside his normally healthy, vegetarian diet and defy all he believes in to aid me in my quest for fat sandwiches. Also, because he wanted to eat sandwiches stuffed with fries and mozzarella sticks, like any normal human with working taste buds and a lust for fat and sodium. But mostly because of me. I think. Dance for me, Tristan, DANCE. And drive for me, because I hate driving.

So, many lovey-dovey huggy-smushy thanks to Tristan for being the bestest of buds and giving me a reason to visit New Brunswick. He's getting his PhD at Rutgers, so he'll be there until he's like 40 or something. Long after his brain drowns in knowledge and his body grows a second brain to accommodate the overflow of thinking bits, I'll be there to dumb him down with my vapid conversation and random sound effects and my insistence on playing with his stuffed animals. Like a true friend.

Those sandwiches remind me of the ones eaten in Belgium and France: mitraillette. Baguette stuffed with hamburger of frikadel or something meaty like that, frites and sauce. Crudité can be added too. You'll be full for a week.

That's just... so wrong it loops back around to right. If we're going to talk about stuff like that,(genius that masquerades as insanity) I must mention the "kapsalon". It has a Wikipedia entry: http://en.wikipedia.org/wiki/Kapsalon

Minke: (Didn't mean to wait a week to reply, sorry!) That sandwich sounds delicious. And looks delicious. And terribly unhealthy. Not that that would stop me. Now I'm bummed that I was in Belgium for a day (well, less than a day, back in 2006) and I didn't know I could get this sandwich. When will I get another opportunity? WHEN?!

The Wikipedia page says it's also known as "Américain" in the Nord region of France, hehe.

Mikeh: What the heck, that sounds amazing too! Aahjragrhaghahra! I bet my local Turkish joint has most of the ingredients...don't know if I could convince them to shove em all together, though. Hm. Hmmm. [strokes chin]

Welp, I am definitely behind on my blog reading.

But, Pittsburgh has sandwiches that they put french fries on (Primantis). They're not very good, unfortunately (though many disagree with me). However, I saw the Man versus Food episode on this place, and would definitely like to try them.

Katie: I'd like to try Primanti's someday, even if it's not thaaat good. I want to eat all the fries-topped foods. :) Hope you can try a fat sandwich someday!