Note: This post was originally published on Serious Eats: New York on Monday. I've never before reposted my Serious Eats posts on this blog, but I thought this one was worthwhile because it's filled with advice I've given to friends visiting NYC over the last couple of years. ...Also, my next Taipei post is still under construction. :( 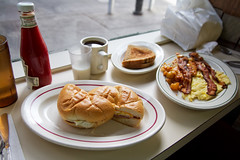 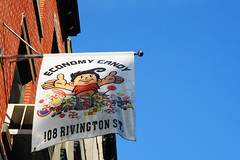 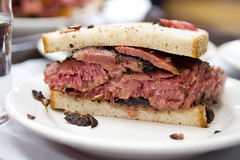 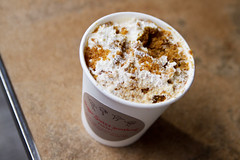 Do you like sandwiches? Pudding? Cake? Candy? Then let me be your guide. Because that's all I'm going to feed you.

This itinerary represents my favorite places to bring out-of-towners to on the Lower East Side for a morning and afternoon jaunt. "Favorite places" does not equate to "best places," but they are, in my humble opinion, consistently good, unique, and won't break the bank. These places aren't all meant to be eaten at in one day (but you can try; more power to you). Pick and choose what sounds best. You'll probably feel disgusting by the end of it, but it'll be worth it. 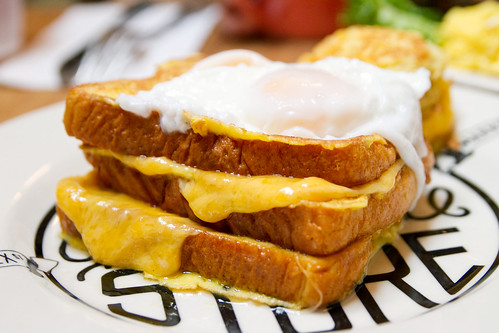 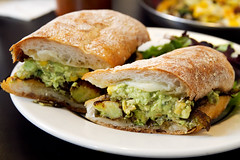 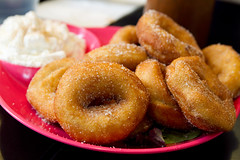 Shopsin's So Good (top) is aptly named. But the sandwiches and freshly fried doughnuts are great too, among other things.

Start your day off with a food coma by going to Shopsins, home of the city's most daunting menus [PDF] featuring over 300 items, brought to you by one of the city's most infamously intimidating restaurateurs, Kenny Shopsin (but really, you shouldn't be afraid). Want a double-decker grilled cheese French toast sandwich? They've got that. Want pancakes encrusted with macaroni and cheese? Yes, yes you do, and you'll get 'em here. Can't decide between schnitzel, fried eggs, and banana bread pudding French toast? Don't stress; they'll serve you a combo of all three. That's just a wee smattering of all the glorious things you can start your day with. If the menu is too much for your brain to handle, I'd recommend sticking to breakfast items, sandwiches/burgers, and fried things. The prices may seem high, but the portions tend to skew huge.

Notes: Seating is limited, and they don't serve parties larger than four. You may have to wait in line if you come here on the weekend. Go on a weekday if you can. Also note the limited opening hours: Wed. to Sat., 9 a.m. - 2 p.m., Sun., 10 a.m. - 2 p.m., closed Mon. and Tues. You have to go inside Essex Street Market to find Shopsin's, located in the southwest corner of the building. 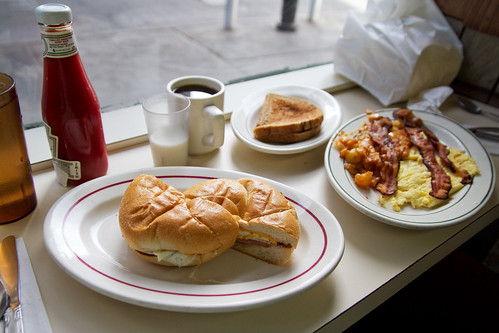 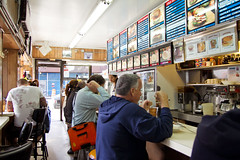 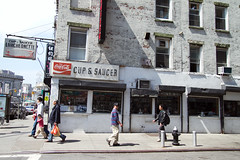 Ham, egg, and cheese sandwich, and a breakfast platter of bacon, potatoes, and eggs at Cup and Saucer.

Want something more traditional? Grab breakfast at Cup and Saucer Luncheonette, a old school greasy spoon that's been around for decades. Don't come here with a group; there are no straight-up tables in this narrow restaurant, just a long counter and seats along the window. The menu has solid diner staples that won't blow your mind, but the food is better than other diners in the area, and it's fast, satisfying, and wallet-friendly. The service is charming, too. 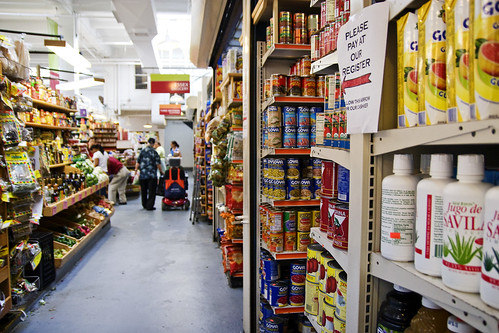 Take a stroll around Essex Street Market. It's one of the city's oldest markets, established in 1940, with over 20 vendors offering produce, meat, fish, spices, cheeses, baked goods—hell, just look at our photo tour of the market. 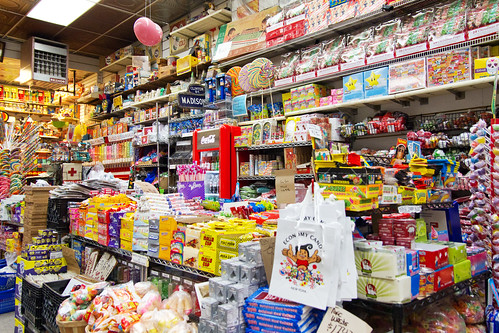 At Economy Candy, dreams come true, if those dreams involve a bajillion pounds of candy. 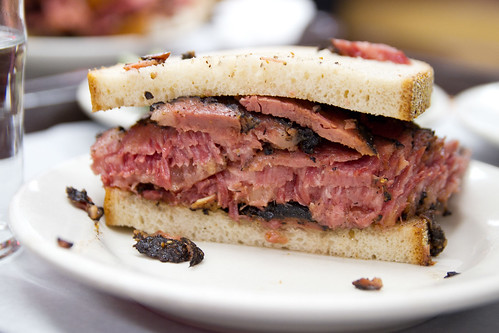 Stare into the heart of the pastrami beast at Katz's.

Although I generally steer clear of tourist-filled restaurants, Katz's Delicatessen is an exception. It's really fuggin' good. One of my friends from Germany recently had a stopover in New York City—his first visit to New York City—with time to eat only one major meal. I told him to meet me at Katz's. Prices are high—their must-order pastrami sandwich is $16.95—but the portions are so large that I only need half a sandwich to feel uncomfortably stuffed. You're getting a pile of tender, fatty, juicy meat; a little goes a long way. Hungrier folks will want a whole sandwich, but if you have someone to share with, you don't have to spend that much money here.

Note: The front register only takes cash, but you can pay by credit card at the register in the back of the restaurant by the cakes. 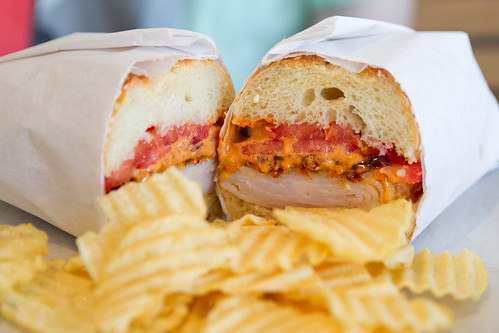 My other favorite sandwich shop in the Lower East Side is Tiny's Giant Sandwich Shop. It's been my go-to sandwich shop for the last seven years. It's nothing like Katz's; it's more of a comfortable, casual, everyday spot with a wide range of consistently good, not-messy sandwiches for $10 and under, many of which come in two sizes and are vegetarian-friendly. One of my favorite combos is to split a Spicy Rizzak and a Veggiest of Them All, the former being a load of meat in bread (mostly turkey and bacon topped with gooey cheddar) and the latter essentially being a salad sandwich (but a good salad sandwich). They sort of balance each other out. Of course, if I could only choose one I'd go with the Spicy Rizzak, because meat. 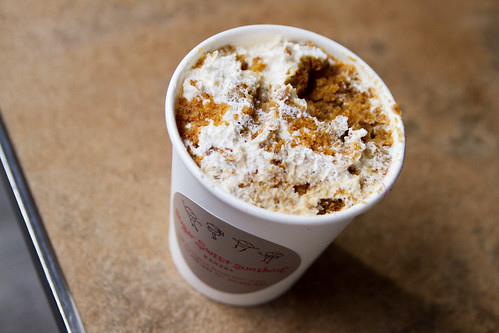 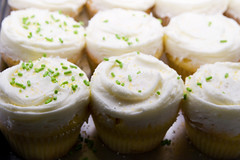 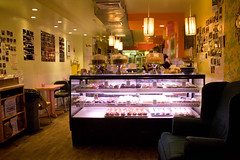 Sugar Sweet Sunshine's pumpkin eggnog pudding (top) is one of my most favorite desserts.

Sugar Sweet Sunshine has the staples of a homey American bakery. Cupcakes! Fluffy layer cakes! Cookies! Pies! Cheesecakes! All served in a cozy, colorful shop that you can comfortably linger in. The main draw for me, though, is their trifles and puddings, like strawberry lemon trifle, banana pudding, and my favorite, the seasonal pumpkin eggnog pudding. These aren't just straight-up puddings, but puddings mashed with cake and whipped cream, which is immeasurably better than pudding or cake by its lonesome.

Sugar Sweet Sunshine is probably best known for its cupcakes though, which are great in their their simplicity. No fancy-pants flavors, no softball-sized cakes masquerading as cupcakes; they do the basics, and they do them well for just $1.75 a pop. 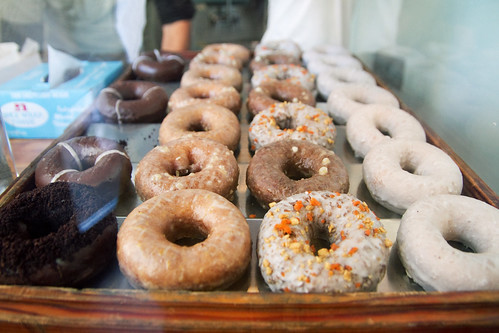 Doughnuts on parade at Doughnut Plant.

Doughnuts more your thing? Head to Doughnut Plant, the harbinger of the pricey gourmet doughnut in New York City. It's still a small investment, though—doughnuts start at $2.50, and for that you get doughnuts made with good ingredients with interesting flavors. I always go for the moist, tender cake doughnuts, specifically the Tres Leches or Brooklyn Blackout. If you like your yeast doughnuts chewier than not, theirs might be up your alley.

I'm totally bookmarking this post for future reference - so many good recommendations! And I totally agree with you about Doughnut Plant; I don't even particularly like doughnuts, but I think the ones from there are really good.

My sister and I ate/went to all these places except Tiny's (well my sis ate their granola for breakfast while I was stalking tennis players, but that doesn't count) and Shopsin's. We also really enjoyed Russ and Daughters in the LES.

Laura: Woo, hope my recs steer you in the right direction!

Angeline: Russ and Daughters should be on any good LES food list, but personally I just haven't been there enough to have a strong connection with it. ;_; I'm a bad New Yorker! We get their stuff in the office sometimes for birthday celebrations or other events...smoked fish for breakfast, sooo goood.

i am devastated that i didnt get to go to economy candy. guess a return trip is much needed!

So, if you love pastrami, try Pastrami Queen on the upper East Side. It'll change your mind about who really has the best pastrami in NYC :-)