This post originally took place on August 18 of last year, which was when I started writing it. But I didn't finish it until now. For no good reason.

This does not end well, but that's ok! Photos of submerged kite taken by Melissa.

Me: Melissa...MELISSA [points out to the Hudson River], THE KITE THE KITE1

Melissa: [turns to kite] AHHHH NO

Me: OH MY GOD NO GET IT UP CANYOUGETITUP2

Me and Melissa: AHHHARRGGHHH NOOOOOO3

Melissa: I'M SO SORRY I JUST LOOKED AWAY FOR A SECOND

Some annotations to clear things up:

1) Response to seeing my kite flying dangerously low to the Hudson River.

2) Response to seeing my kite flying dangerously lower to the Hudson River.

3) Response to seeing my kite gracefully touching the water's surface, then getting swallowed by the water.

You think flying a kite is all whimsical and fun, until your kite lands into a massive, swiftly moving body of water, and then it makes you realize, "So this is the pure horror a mother feels when she turns away from her only toddler for just a second, then turns back to see her toddler has disappeared. ...Maybe not into a river. That would be much worse. But yeah. It's just like that."

The site of the kite drowning: Pier I off of West 70th Street. I had made Melissa in charge of keeping my kite aloft while I called Diana to coordinate meeting up on the pier. Elsewhere on the pier, Diana had already given her brand new kite a go, but after something like 30 seconds of exhilarating kite flying action it too experienced death-by-river.

"Come over and join us; we've got a kite you can fly!" I assured Diana, turning right to give a nod of acknowledgement to Melissa—at which point I noticed the kite not majestically flying as much as lifelessly falling toward the river's surface, over a hundred feet away.

And then the frantic yelling commenced. Refer to the dialogue above.

But the kite wasn't dead yet. The string was taut; the kite was still attached to it. "We can reel it in!" Melissa suggested ever so optimistically. I like that about her—her beaming optimism in the face of probable doom.

Melissa helped me reel in the kite, gently pulling as I wrapped the string around the spool. The string held on despite the immense force of the water. Impressive. Maybe Melissa was on to something with that optimism of hers.

We managed to pull the kite all the way back to the pier. Looking over the pier's barrier, we could see the kite "flying" just under the surface of the water, intact and full of potential to ride the skies once more.

"I bet this is where it's going to break," I said. I'll admit that I felt a smidge of a smidge of hope, but I didn't want to show it.

"No, no, this will work! We just have to pull it up slowly."

Pulled slowly, we did. We pulled and pulled; the kite felt heavier with each tug.

In my mind, the kite willingly accepted the grasp of death. The cold, wet grasp.

The frantic yelling of watching the kite fall was replaced by dejected quietness. I couldn't remember the last time I felt less thrilled by something not related to a close brush with death (which is evidence of how extremely conflict-free my life is—I know). 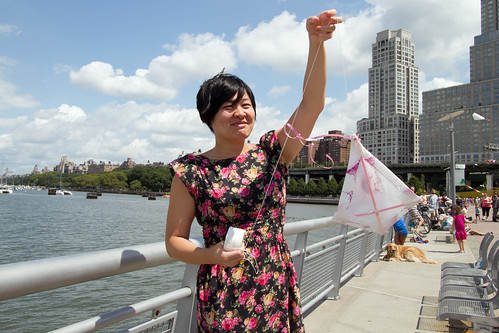 It took me a while to realize I overreacted in every way (aside from the initial bout of semi-intelligible yelling; that's just human instinct). Melissa surely felt worse than I did. Not only did her homemade kite not fly—the kite she had been excited to fly for weeks—but she also unintentionally sunk my kite, which I merely bought online and didn't have much of an attachment to.

I'm ashamed that I almost let a kite—a fairly inexpensive one I owned for about four days, not long enough to develop a meaningful bond with it (I heard that happens around day seven)—tear apart my friendship with Melissa. If a friendship doesn't hold up after one friend accidentally drowns the other friend's kite, that friendship wasn't meant to last. (Write that down in your Friendship Rule Book.) 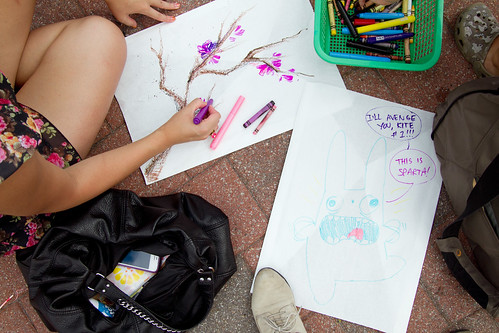 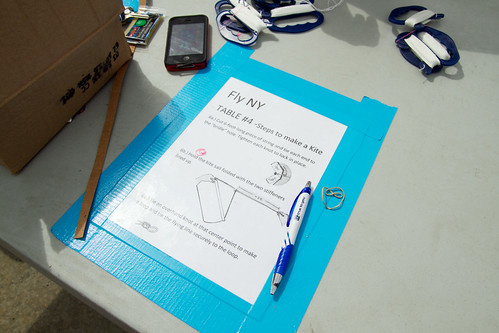 After I came to my senses, Melissa suggested we make new kites. Thanks to the good folks at FlyNY, as part of their FlyNY Kite Festival they had a kite-making station. More for pre-pubescents than 20-somethings, but whatever. GET OUTTA MY WAY, YOU BABIES. 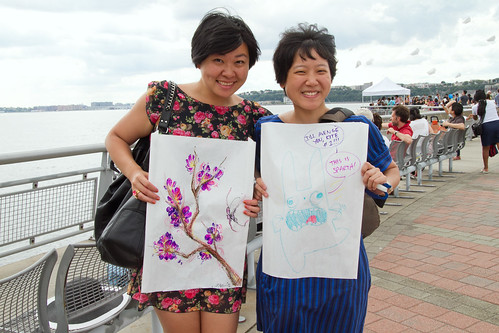 People oohed and ahhed over Melissa's lifelike drawing of a flower-studded branch, effortlessly drawn from the same mishmash of crayons and markers everyone else was using to far less masterful degrees. I'm going to pretend my drawing of Poofy wracked with insanity enhanced her drawing by making it look way better in comparison. 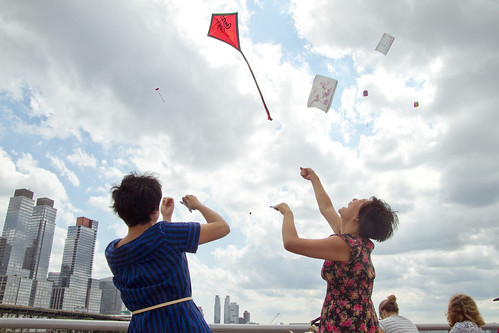 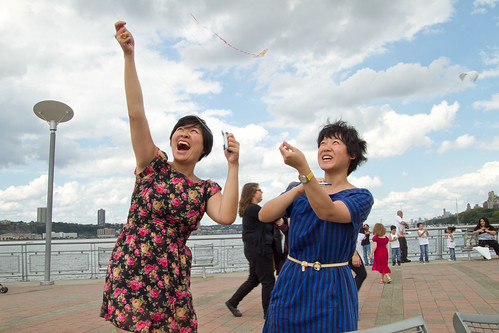 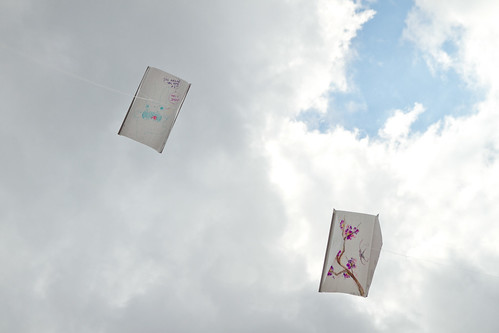 OH MY GOD IT WORKS. Thanks to Diana for taking photos!

These simple kites flew with ease and managed to avoid drowning. Little did I know how gratifying it is to sustain the flight of a piece of paper that's constantly pulling away from you. ...It's very gratifying. Especially after your first attempt failed.

Also gratifying: all the food we ate while flying our kites. Yeah, there's food in this post! It's just not as fun to write about as the other stuff. Sorry, food. But it was delicious. 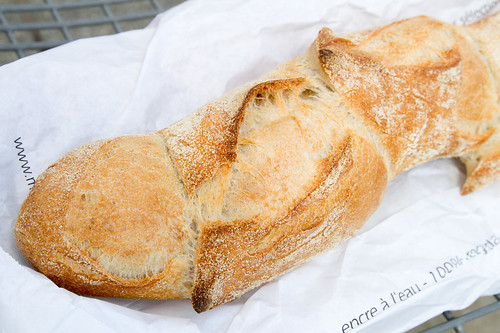 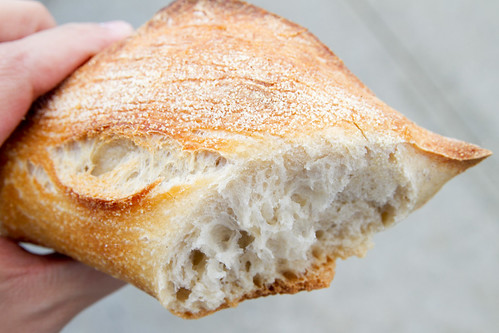 Baguette, I love you.

Melissa and I spent the morning gathering foodstuffs from some of our favorite Upper East Side food shops. The star of the meal: baguettes from Maison Kayser, the first U.S. location of the French bakery chain. I wouldn't go out of my way for the non-bread items at Maison Kayser, but that baguette? Yes, I will go to the Upper East Side just for a baguette. (I live in Brooklyn, by the way. That wouldn't seem very impressive if I lived on the Upper East Side.) Their fantastically hearty, crackly crusts and chewy innards aren't like those of any other baguette I've had in the city. We got the pre-sectioned Epi East Side baguette ($2.75) since it's easier to share. 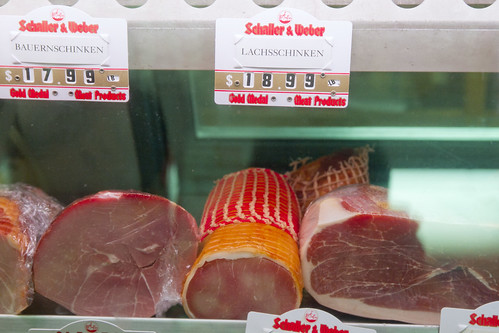 To go with the bread: ham from German market Schaller and Weber, specifically lachsschinken. I recommend it if you're looking for a delicate ham. The guys behind the counter are friendly—if you don't know what to get, ask for advice and samples. 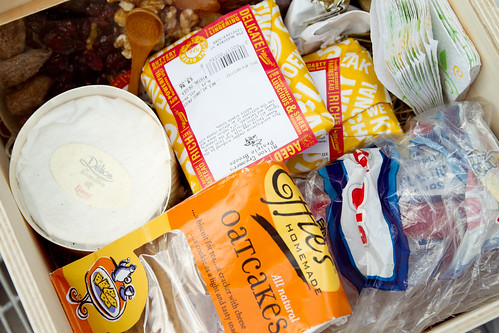 Melissa had also brought a hefty gift crate of cheeses, dried fruit and nuts, and other goodies from Murray's Cheese (not part of the Upper East Side crawl). Much Délice de Bourgogne slathering-on-bread ensued. 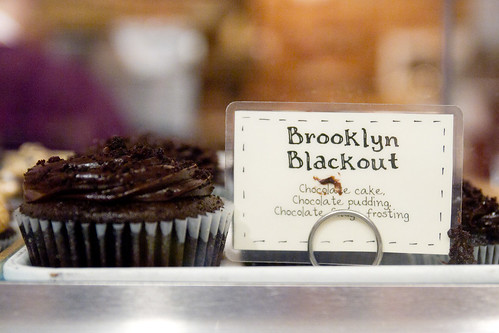 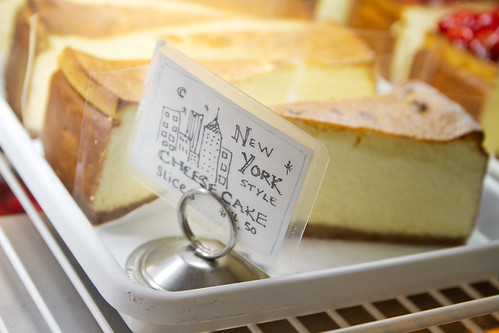 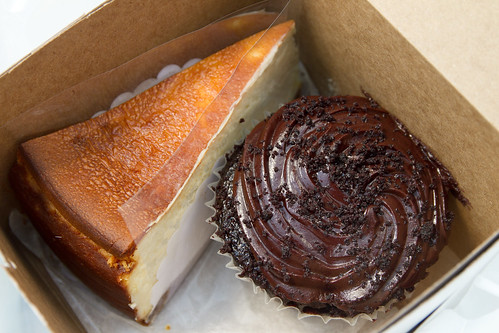 Dessert! Must have dessert.

And for dessert, a Brooklyn Blackout cupcake (chocolate cake filled with chocolate pudding and topped with chocolate fudge frosting) and slice of New York-style cheesecake from Two Little Red Hens, one of my favorite bakeries in the city for consistently tasty homey American-style baked goods. 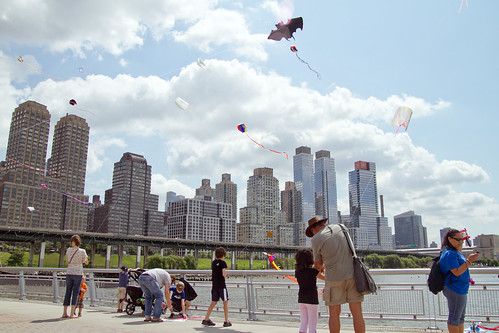 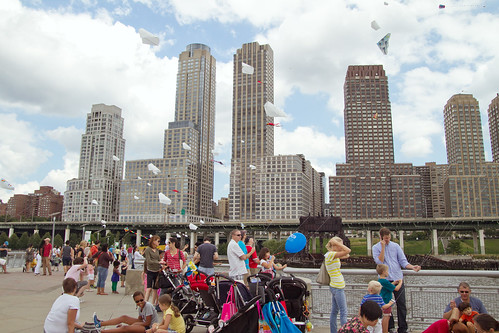 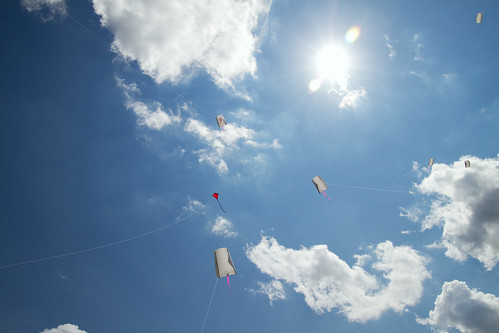 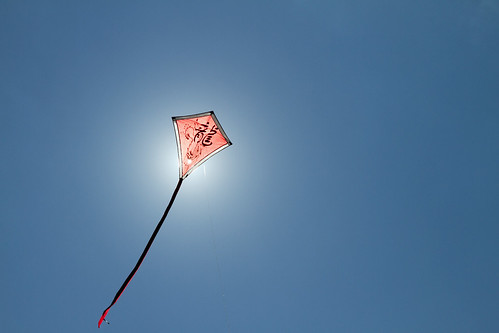 Kites galore! The red kite is the one Diana bought to replace her kite that fell in the river.

What did I learn after this experience? Flying kites is surprisingly fun! But don't fly kites over water if you can help it. And if you can't help it, don't use an expensive kite, because it might drown. And it's probably best not to fly a kite during a kite festival where you're battling for space with other festival goers, but at the same time it's fun to share the experience with so many people. Even if that experience includes watching your kite drown. You won't be the only one. 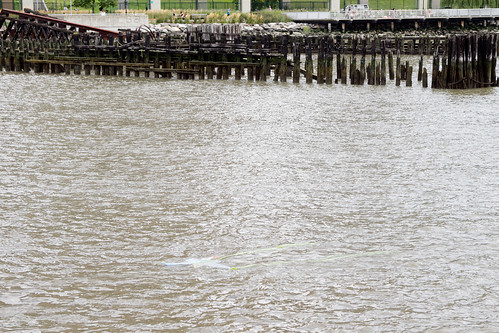 Kite corpse alert. We saw quite a few of these

Robyn, I've been following your blog for years. I still enjoy it, but I wished you posted more frequently.

OH GOD THE GUILT, IT'S ALL RUSHING BACK. D:

I'm still so sorry! Maybe this year we can go fly kites somewhere far far away from death, like a park. Then we'd only have to worry about land sharks (AKA puppies) and I'm confident we could handle those.

That image of the kite willingly accepting the "grasp of death" is amazing.

Coco: Thanks for sticking around my blog for so long! I totally hear you on the "writing more" part. Unfortunately, I've come to terms with just not having as much time to post as I wish I had. :( My day job is more time consuming than most people think it is. ...And...well, I also work more slowly than I should. I have no idea how other people blog regularly while working all the time.

Olivia: Aw, thanks! Imagine if Melissa hadn't made my kite drown. This post woulda SUCKED.

Melissa: Man, you don't have to feel sorry anymore! See my comment above. :) But yes, next time, you and Lee Anne and all the peeps can go to a park...not near water.

While I would never complain if you posted more (who would?!), your posts are kind of like...well, I don't really have an analogy because it's late and I'm tired.

So, I will put it this way. I don't mind how long you take to post, because I know that it will be worth it.

ahhhh, honoz, near kite tragedy miss! The dessert portion of the afternoon could cure any trauma, though, I think.

Pretty sure I felt an inordinate amount of sadness for the little kite. Such a sweet thing, cut from it's flying prime! DX

In other news, yay baguettes! I visited a Maison Kayser when I was in Paris, but I feel like I might've bought the wrong bread because it was really mediocre - I got a petite olive roll and some other roll. Yes, I do believe I missed out greatly on Kayser bread.

You made Coca-Cola spew from my nose. I hope you're happy.

Best blog post I've read in a long time! Laughed the entire way through it and loved the photos of your successful flight.

Katie: Aw, thank you so much!

Elizabeth: Dessert cures so many traumas! Well. The psychological ones. Maybe not the physical ones. BUT..YEAH!

Alice: I think I only went to Maison Kayser once in Paris, but I did really like the baguette I got. There were too many baguettes to eat...and I had to eat...so many of them...[damn I want to go back].

aha this is pretty funny/sad. ;-; It had a short life and will probably be missed.

XD This is the first time I've ever read your blog- and its pretty hilarious :3 Also really informative- I really want to bake angel cakes now.

That last kite-picture is a desktop wallpaper waiting to happen.

I'm sorry for your loss. Of the kite. It's probably for the best.

Frida: Thanks for reading! I hope I can keep up the funny, but I might need more sad things to happen to me. Hmmm...

I rediscovered your blog after some years! It's amazing you still blog. Love your writing! And yes I feel exactly the same way about kite-flying haha.

Julia: Thanks so much for coming back!