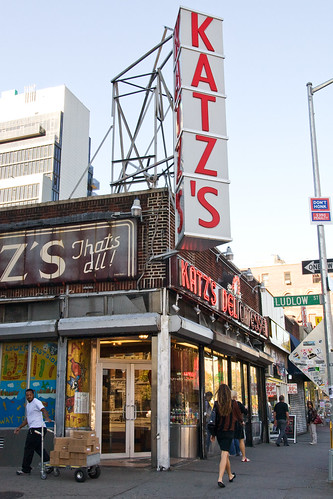 When you live in New York City, it's easy to overlook popular, tourist destination restaurants that are actually good. Take Katz's, the over century-year-old home to hefty meatpiles featuring pastrami, corned beef, brisket, and other sliced or ground up animal parts. It's one of the city's most famous restaurants; you don't need me to tell you to go there.

But every now and then, I need people to remind me to go there. Because two years went by between my most recent Katz's visit in March and the one before that. And thus I was reminded of what I'm missing when I don't eat at Katz's: 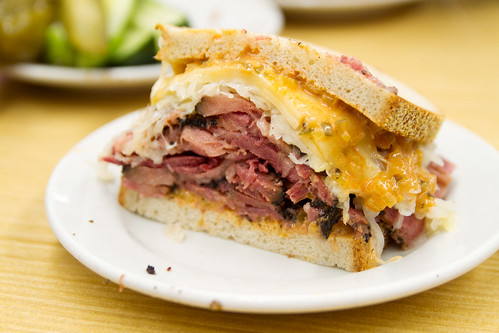 Reuben. I love you.

That's half of their Reuben sandwich: a floppily stacked mound of hand sliced, meltingly fatty, tender pastrami (by request; the default is corned beef) topped with sauerkraut, a few slices of Swiss, and a slathering of Russian dressing for $16.55. Sure, the pastrami doesn't need extras, but they don't hurt. It's a different kind of awesome from eating a plain pastrami or corned beef sandwich. Also, messier.

Although $16.55 may sound like a lot for a sandwich, consider that half a sandwich should overly satisfy most normal-sized stomachs—and the sandwich comes with a generous plate of pickles to further pad your belly—making it an awesome dinner-for-two for about $8 per person. I say that's a steal. Why the hell don't I eat here more often? 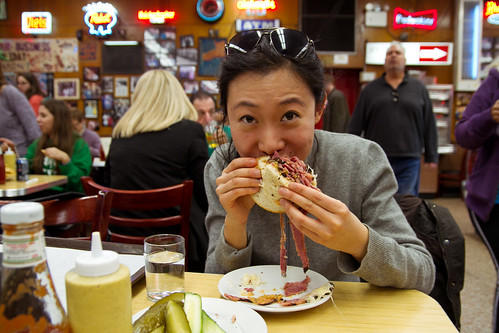 ...Whaaaa? I'd assumed that Chichi had tried every awesome meatstuff in the city because that seems like the kinda thing she'd do during every waking moment she's not writing or exercising. For those who don't know Chichi, here are a few facts to give you some insight into her deep appreciation of meat: She writes an offal-centric recipe column called The Nasty Bits, she's apprenticed at a butcher shop, and she's been known to eat chunks of meat in bed as a nighttime snack. ...At least I think the last bit is true. Probably.

Chichi at the sandwich counter. She's got that special meat-loving glow in her eyes.

If you've never been to Katz's before, here's a rough guide on what to do when you visit. Hold on to the ticket you're given as you walk in; you'll use this to pay when you leave. Smush yourself into the shortest line of huddled bodies* waiting for pastrami or corned beef-centric sandwiches (I think there are four or five lines). If you want other foodstuffs like soup or fries, you'll have to wait in a different line, but you can do those later. (Actually, what am I talking about; ignore the other stuff.) Wait in line. Give ticket to dude behind the counter. Place your order. Watch him make your sandwich. Eat the freshly sliced meat samples he plops in front of you. Take sandwich to table. Grab a cup of water at the water station along the restaurant's back wall. EAT. (Later: massage belly while falling asleep.) 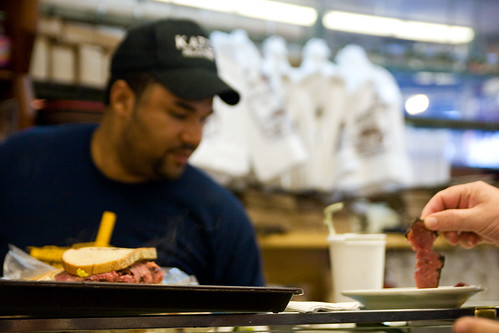 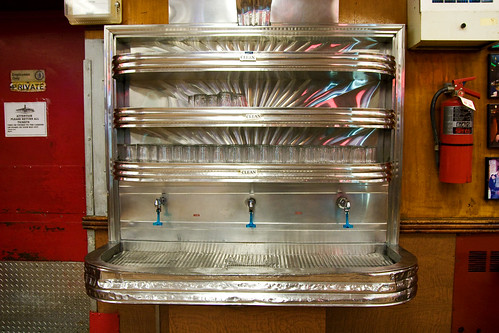 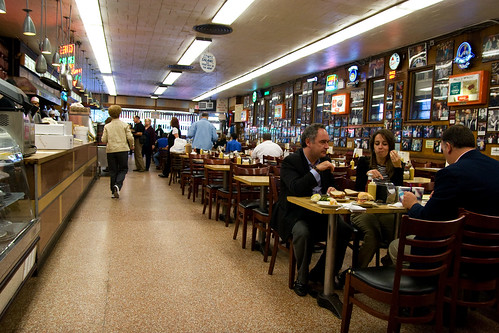 A quiet morning at Katz's with Ed Levine, Ferran Adrià, and others. Aka, a totally atypical morning. I was there to take a bunch of photos when Adrià visited in 2008.

* Katz's isn't always mobbed. I've been twice for breakfast on a weekday when each customer had a comfortable, far-from-smushy amount of breathing space.

Ever been to Schwarz's Deli in Montreal? It is famous for it's Smoke Meat....

Sybaritica: Unfortunately, I've never been to Montreal. :( I've heard of all the good food there, though. Someday!

Go to Schwartz's! And then cross the street (be sure to not get hit by cars) and have home made ice cream at the shop across the street. I don't remember the name, and probably never knew it to begin with. *While waiting in line at Schwartz's* "Oooh a sign that says Homemade Ice Cream Let's go there after".

Try Eisenberg's. It's on Fifth Avenue between 22nd and 23rd.

Angeline: Ice cream. I'd be ALL OVER THAT.

Katie: I'm ashamed I haven't been there yet (but have passed it god knows how many times); thanks for the reminder!

that ice cream place across from schwartz's is called "Ripples." it's pretty good but I have never been able to do schwartz's and ripples in one meal. Also on the same block as schwartz's is an amazing portuguese chicken place called "Coco Rico." Definitely worth a try as well. (I went to school in Montreal :P)

Naomi: Thanks for the recs!

Fourthing Schwartz's "smoked meat" so long as you don't commit heresy and ask for it lean.

Also, there is no such thing as a pastrami Reuben. The same sandwich when made with pastrami is officially a Rachel. And they are delicious. You should enjoy them far more often than once every two years. But you should order it proudly by name.

The people at Katz's will most definitely know what you are talking about. And then you won't have to sound like a deli tourist.

Daniel: My bad; I must remember to use "Rachel" next time. I read the Rachel could also feature turkey instead of corned beef, and cole slaw instead of sauerkraut, which sounds like quite a different (but still tasty) sandwich. ...I'd rather have pastrami.

I didn't realise that the Reuben was more than $10.... last time I went, i think it was less. Still an awesome meal.... i got so full after eating that. Will never find anything like that in Australia