As is the tradition with year-end/year-beginning posts, here's a roundup of the best new things I ate in New York City in 2011 ("new" being new to my stomach, not necessarily the city), focusing on dishes I didn't get around to blogging about last year because 2011 was my crowning year of being super lazy. (Just wait until you read about my vacation in Norway. I spent about 50 percent of the time sleeping. It was the best.)

Apologies if this list is rather boring. Despite my profession, I don't make the effort to be at the forefront of the NYC food scene—at least, not to the degree I used to. I rely on my friends and coworkers for the good stuff.

Ok, let's get on to the fun stuff.

Best Stuff I Never Blogged About on TGWAE 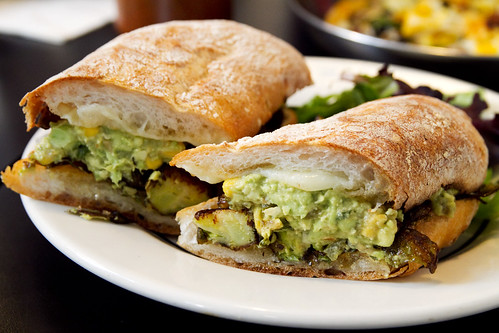 Bingo sandwich at Shopsins: "Fried brussels sprouts, guacamole, jack, ciabatta." The "fried brussels sprouts" part is what jumped out at me from Shopsins' 21,000+ word menu, and as usual, those little cruciferous, fart-inducing balls equated to a winner. Crisp and tender sprouts taste great on their own, but they taste reaaaally good topped with cool globs of creamy guacamole and a layer of gooey cheese in between crusty ciabatta.

The sandwich was $13 when I first tried it last March, but it's $16 on the current menu and comes on asparagus bread instead of ciabatta. I'd hope it still tastes just as good as the sandwich I tried. 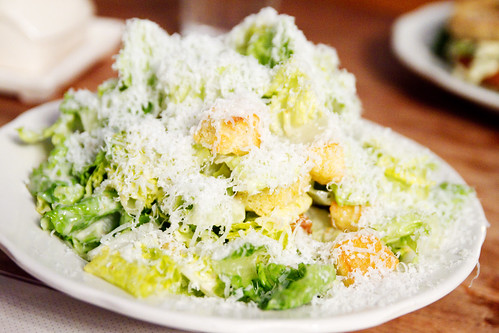 Caesar salad with smoked herring dressing at M. Wells: M. Wells is best remembered (it closed last August) for its over-the-top meatified dishes like foie gras grilled cheese sandwiches and bibimbap topped with razor clams, scallops, and oysters, but out of everything I tried there (and I tried many things), the Caesar salad ended up being my favorite. Maybe because the combination of crisp romaine, delicate Parmesan shavings, and strong-but-not-overpowering smoked herring dressing was the only refreshing part of my meal after eating a fried head cheese sandwich and before eating a massive 1.5-pound burger. 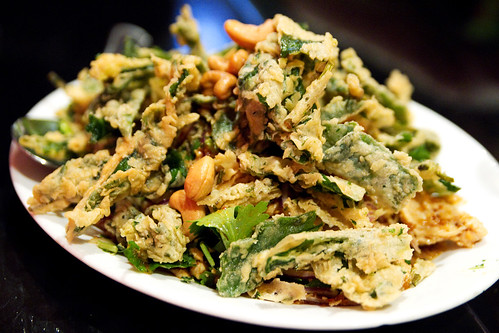 Crispy Chinese watercress salad at SriPraPhai: It's watercress that's battered and fried, resulting in a salad that tastes more like fried than watercress. Shrimp, squid, chicken, and cashews protein it up so you're not just eating a plate of delicate fried something-something. I sort of wish I could eat this every day. 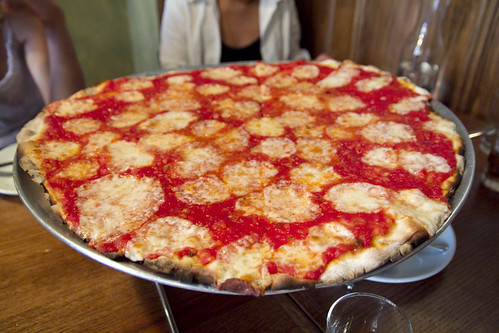 Classic pie at Rubirosa: I wouldn't have eaten at Rubirosa four times last year if it weren't so close to my office, but the other reason is because they serve great Italian food at reasonable prices in a comfortable setting in a neighborhood I don't know much about food-wise. I've tried their pizza, pasta, sandwiches, salads, and bruschetta, and would recommend all of them, but their specialty is thin crust Staten Island-style pizza. Read more about it in Adam Kuban's review on Slice. 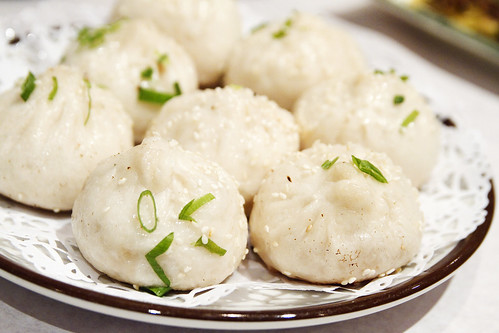 Shengjianbao at 456 Shanghai Cuisine: Shengjianbao—commonly described on menus as something like "tiny fried juicy buns"—are one of my favorite Chinese dishes, but I didn't eat them often until I tried 456's version. It was the juiciest/soupiest version I had ever eaten, and the nicely crisp-bottomed bun was great. Since I've never had the real deal in Shanghai I can't tell you how authentic this version is, but they did send me on a hunt around Chinatown to see how others stack up. So far, not so well. Aside from 456 my favorite shengjianbao are from Shanghai Cafe Deluxe. The worst I had were from Shanghai Asian Manor, such soulless (or perhaps soul-sucking) bun sacks they were. I can still taste the fail just by looking at this photo. Nick has more to say about 'em. 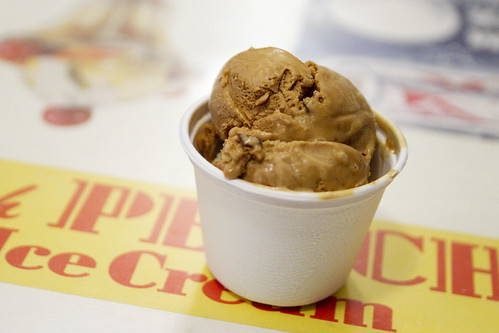 Crack caramel ice cream at Ample Hills: Salted butter caramel ice cream on its own is the stuff of dreams. Sugary, buttery, dairy-laden dreams. Take that ice cream and mix in bits of "crack" cookies made of Saltines, butter, sugar, and chocolate, and now you've got the stuff of dreams' dreams. Which are like, really damn good dreams, not weird ones where your teeth become filled with pus or you ride a physics-defying roller coaster at the edge of the universe or you walk into a floating theater whose walls are made of knitted yarn. Yeaaah.

Ample Hills gets extra points for being where my friend Eric works. If you're familiar with Eric's line of emotive art, then you know he's probably cooler than most of us. He would never settle for ice cream that wasn't as awesome as his face. 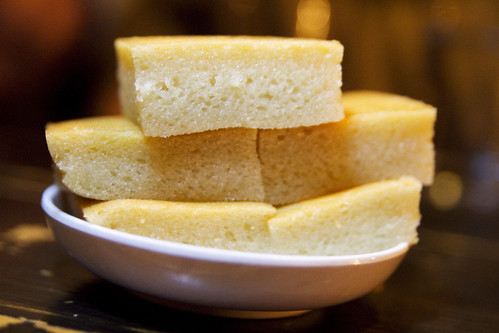 Mochi Cakes at Fatty Crab: Out of everything I ate at my first and only meal at Fatty Crab, the complementary mochi cakes (FREEEEE CAAAAKE!!!) we received at the end of our meal was my favorite part. I guess that doesn't speak well about the rest of the meal, which, while not bad, was nothing that would entice me to return. Maybe my expectations were too high after hearing so many good things about the restaurant over the last few years. ...But damn, those mochi cakes. Unsurprisingly, they taste somewhere between mochi and cake. Okay, more like mochi than cake. Bouncy-chewy, but not as dense as straight-up mochi.

In the end we visited 43 bakeries. I'm sure we missed a few, but I think we put in a good effort. It was easy to pick the winning bakery, Bread Talk, since most of the tarts we tried were subpar. Not only was Bread Talk the best with its flaky, light, tender crust filled with smooth, creamy custard, but it was also the cheapest: two tarts for $1 (unless they recently raised the price). Read the full results here. 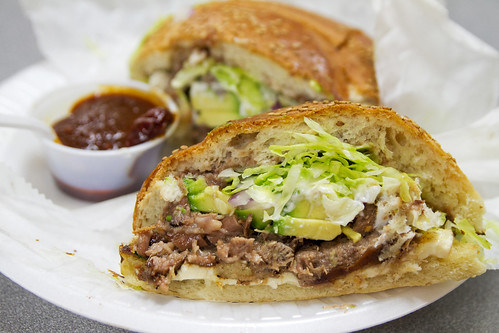 Lengua cemita at El Tenampa: El Tenampa is my favorite place to eat in my neighborhood, hence why I've stopped going to...all these other places in my neighborhood. I already blogged about it on Serious Eats and Real Cheap Eats, but I shall repeat myself because this sandwich is delicious. It's mostly because of those big ol' chunks of tongue—my favorite kind of protein for any Mexican dish—with their crisp, charred edges and tender everything-else. All the condiments—avocado, onion, crema, cheese, and bean spread—come together so well, and in just the right amounts. The bread's no slouch either; the soft, well toasted cemita bun is perfectly suited for its fillings. (Thanks to Seth for the recommendation!) 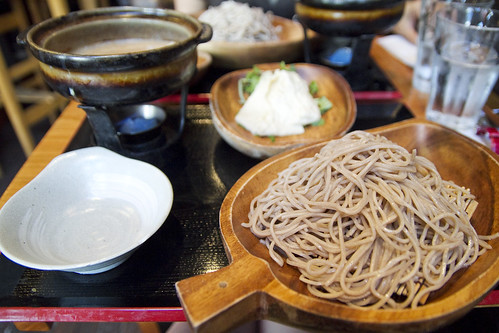 Soba at Cocoron: Even though I haven't tried every soba shop in the city, I'm going to call Cocoron my favorite soba shop in the city because they have their own set of cute, cartoony mascots. (I'll take this opportunity to drop a semi-related link: a list of Japan's police mascots representing every prefecture in the country. I approve of this muchly. Especially this dude.) But even if they didn't have mascots, they'd win me over for the friendly service and fantastic soba. Read Kenji's great review at Serious Eats for more info and, um, actual descriptions of the dishes.

Because I've already written about these dishes, here's a quick list, in no particular order: 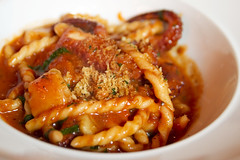 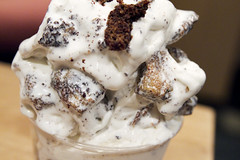 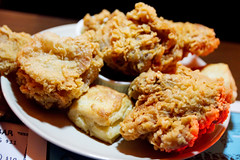 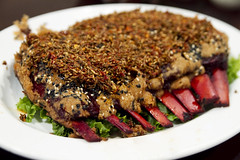 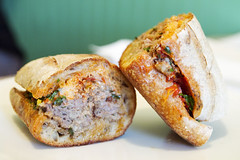 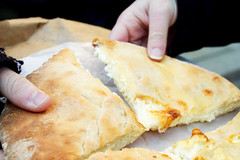 new post! gloomy day has been brightened. tummy has been induced to growl!

this looks so good. i want to read about norway now.
- someone stuck in denmark

Also, Gong xi fa cai! I hope your belly is suitably stuffed over the course of all the celebrations!

Finally commenting on a post! I read this before bed a couple of nights ago and woke up thinking about fried brussels sprout sandwiches. Still thinking about them now. Sprooouuuts. Also, I think I need to make me some mochi cakes.

You've inspired me to try to find foodie blogs based in suburban Chicagoland so I can find some great food to try while I'm still pregnant enough to get away with it. (Unfortunately I couldn't find much, except for a couple posts on SeriousEats Chicago. Argh!)

Janet: IT'S YOUU! You brighten my day. :) COME OVER AND EAT STUFF WITH MEEEE.

Sabrina: I saw your post about losing all your stuff on the plane. :( DENMARK, WHYYYYY. [INSERT FIST SHAKE] I hope things get better during your stay. I'd like to visit Denmark someday if it doesn't involve losing all my stuff.

deelove: Someone else gave me a link to that video today! You know me too well. :) Thanks! And happy new year to you too!

mamanegi: Time to make yourself a sandwich! Or mochi. Or both. I've never made mochi cakes but I heard they're super easy.

Carrie: I hope SE steers you in the right direction! Wish I had recs for you, but I need to spend more time in Chicago. Wah.

Hello,
I am trying to track down the rights to use a cooked shot of a beef marrow bone photo from 2010.
Please e-mail me if we can do business.
Thank you.

Everything looks so good!! I really want that lengua sandwich and some soupy dumplings. I'm moving to Brooklyn this weekend! Let's eat together soon. :]

I WANT TO EAT THEM ALL. RIGHT NOW. LET'S GO.

I'm just happy to have the pleasure of eating with you, even when your body is being all fail-y. Let me know when you're all patched up so we can go destroy- er - consume all these delicious things again.

P.S. I went to Sripraphai earlier this week and our watercress salad looked way smaller than that, with the proteins in a side cup. Still good, but I think your version incorporates the flavors better.

P.P.S. I will visit you just so we can have those cemitas.

lawls. You link to me as if I'm some sort of authority on 生煎包. YOU HAVE GREATLY HONORED MY FAMIRY.

I'm so behind - I have only had the mochi cakes and ice cream from your list, yikes! To think I write about what's happening in the food trend world, I'm sure not on top of Manhattan's trends at all, despite being here!
See what you think of my compiled food trends of 2012 - something to watch out for in 2012 amidst travels too! (There's a link to 2011's trends in there too, most of which are distinct from your favorite consumables, but honestly even I didn't see ALL my predictions come true in 2011!)
:)

doh, forgot to leave my link despite saying "look"!
http://sssourabh.wordpress.com/2012/02/08/cravings-2012-astrology-for-gastronomy/

LOL I like those cute teeth marks on that thick and deep egg tart. I live in Singapore and eat in Johor over the border. This is my favourite egg tart ;D http://johorkaki.blogspot.com/2012/03/tim-sum-restoran-gim-cheng-in-taman.html