Sometimes people ask me general questions like, "What's the best dish you've ever eaten in New York City?" Then my brain responds with a little pop and fizzle and sort of goes all oozy while dripping out of my ears. (Is that where the brain goes when it melts itself? I'm just guessing.)

But when I think about it, after plugging up my ears, it's not a very hard questions. It's a really broad question, but if something is truly memorable, it shouldn't take that long to...well, remember. It should be like that word association exercise where you have one second to splurt out the first word that comes to mind when given a word prompt, like "fish oil." (My response: "eeeeuuhhhhggg[throaty gurgles]" which isn't a word, I guess.) "Muslim lamb chop" ($21.95) from Northern Chinese restaurant Fu Run in Flushing. I put it in quotes because the menu calls 'em chops, but they look like ribs...and I just found out they're lamb breast. Or we could just call them "crispy, cumin and sesame seed-coated, super tender, juicy lamb meat-on-bone-sticks" because that's what they are.

Imagine a mad chef-scientist turning his attention to American Chinese pork spare ribs. Naturally he'd replace lamb with pork since it's so much tastier. Then he'd braise it, roll it in spices, and deep fry it. The crunchy spice-studded exterior encases red-tinged meat and bits of snow-white fat, all packed with wonderful lamb flavor. 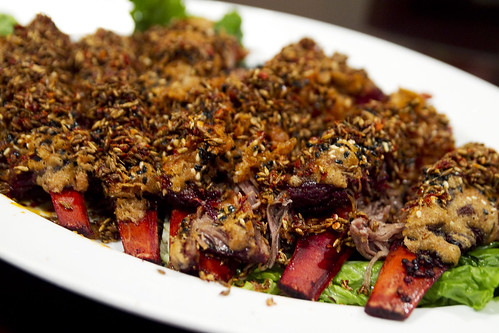 Braised. Spice-rolled. Deep fried. The recipe for success. Besides adding flavor, the cumin and sesame seeds give it another layer of crunchiness on top of the crisp fried skin, and then there's the fat and meat underneath that all just flop off the bone with the gentle poke of a chopstick. I've rarely seen such tender meat before. This is easily my favorite form of lamb ever. If there's a better lamb dish out there, I'd like to hear about it. And eat it.

The lamb funk isn't that pronounced, so even if you don't like lamb, you may like this dish. My anti-lamb friend Diana was even won over. VICTORY! Fu Run doesn't just have one of the best lamb dishes ever, but also one of the best desserts: candied taro ($8.95), or "ba si" in Chinese. You can also get candied sweet potato, apple, or a combo of all three, but taro is my favorite. The dish consists of a pile of hot lightly fried taro chunks covered in hot caramelized sugar, making for a deathly hot bite, until you dunk it in the accompanying bowl of ice water to cool and harden the sugary shell around a steaming core of taro, making for a slightly less deathly hot bite. Result: taro chunk with a crunchy candy shell. It's awesome. So awesome. I daresay it would go nicely with whipped cream or ice cream, but that's not very Chinese. Also, there isn't much time for sweet creamy accoutrements since you have to work quickly with the chunk-dunk (the...chudunk?...no, let's forget I said that), unless you want to end up with a hard mass of congealed taro bits that can only be separated by violently stabbing at the candy shells with your chopsticks as your eyes go all red and bulgy because blunt, plastic chopsticks are really ineffective at loosening taro bits glued together (and to their plate) by sugar. 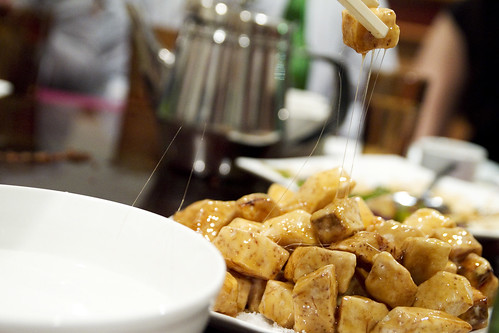 James has better photos on his blog so you can see the purple-streaked taro innards and hair-like candy strands and such. It's a beautiful thing.

You would have a fine meal at Fu Run just sticking to the lamb and the taro, but other worthwhile dishes include... 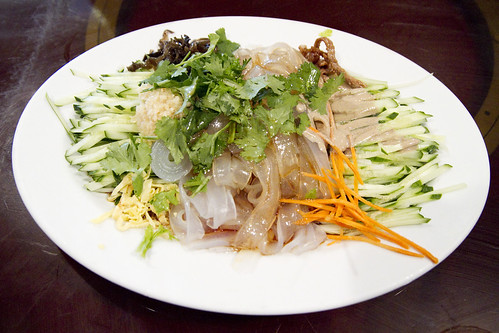 One of their green bean sheet jelly appetizers ($8.95 to $10.85), which are like cold noodle salads. Slipper and slightly chewy green bean sheet jelly doesn't have much flavor on its own, but mixed with shredded cucumber and carrot, garlic, fungus stuff, cilantro, scrambled egg bits, and sauces I can't tell you much about, it tasted pretty great. Very refreshing stuff, if you're into that. 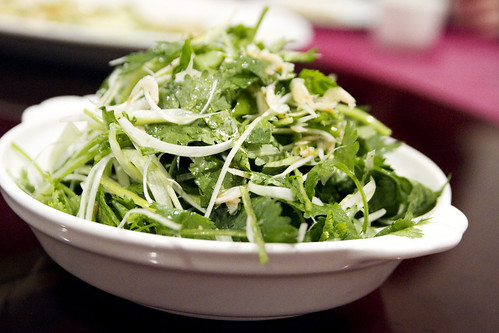 Also refreshing is the tiger vegetable salad ($5.95), a combo of cilantro, scallions, and...judging from my photo, tiny shrimps. And probably other things. This isn't a must-order item, but I'll mention it anyway because I had never eaten it before: spoon worms, aka sea intestines. "Sea intestines" is an insanely euphemistic name considering that...this is what they are. To say they're a bit phallic-looking is like saying Michael Bay dabbles in blowing stuff up. After getting cleaned, chopped up, and cooked, spoon worms go from bulbous pink fleshy sausage things to small, innocuous brown tubes. They have little flavor; they're more about the texture, a pleasant combination of a smidge crunchy and chewy. I wouldn't dream about this dish, but I'd happily eat it again.

I am dreaming of that lamb ever since I saw your photo on Flickr! Wonder if it's possible to make it at home...without the deep frying. Grilling?

what a coinky-dink... my grandmother made the 拔絲 taro thing yesterday. I SHALL EAT IT WITH COFFEE ICE CREAM RIGHT NOW.

Mmm, I've been looking for a reason to go back to Flushing and now I've got one! Those sea intestines kinda freak me out though :)

my parents and i go to this restaurant all the time! The green bean sheet jelly salad is quite amazing! Must get with the mustard oil (tastes similar to wasabi in oil form, but gives the salad a great kick)
Their fried salt & pepper pork (boneless) is also quick amazing. My cousin from China who visited over the holidays loves their sour cabbage and pork belly soup with vermicelli as well.

Geez I love this blog. Your writing makes the food come alive. Moreso, you have a knack for discovering great places to go!

Nick: I want someone to make me the taro thing. :C

Serena: So many reasons to go back to Flushing! I hope you get to try this dish soon!

Lily: Yeah, that bean sheet stuff is pretty great! I need to eat more of it. And I like the sound of that salt and pepper pork!

Pizza Quixote: Thanks for reading! Too bad about Island of Taiwan. :(

I like to think myself an adventurous eater, but the live spoon-worms kind of grossed me out, but so do live monkfish - and I love them.

is the texture sort of like whelk, or squid?

Rodzilla: I'm not sure what the texture of whelk is, but it didn't remind me of squid. It didn't really remind me of...anything. ...Hm. SPOON WORM EQUIVALENT, MUST FIND ONE.

This is freaky...I just ate there earlier today, got home, and saw that you blogged about the exact same restaurant. We even ordered the exact same green bean sheet jelly appetizer. O_O

My party also ordered the guo bao rou (I think it's called crispy pork in orange sauce or something like that), and it was delicious. Mmm..okay now I'm hungry again.

I followed the link you posted for the sea intestines, and I can now add the sight of live, squirming, unbelievably phallic-looking sea intestines to my list of "Things I Can Never Unsee."

Uh, yeah, sea intestines. I want to see how they swim, but I don't. I hope I forget about them by the next time I go hang out on YouTube.

I've never seen or heard of candied taro, either, but I hope I can find a restaurant here in Phoenix that serves it! I love tar!

That should've been "I love taro," of course. Not much love for tar.

Being Chinese, I didnt realize Northen Chinese food is my calling.

I was sold in a heartbeat. Thanks for the recco!

Seeing these photos brings back memories of eating out in Beijing's Xinjiang restaurants. Huge chunks of cumin-crusted lamb...drool.

Lena: Whoaa awesome coincidence! Or freaky! Awesome and freaky? I gotta get crispy pork next time!

KatyBelle: YOU'RE WELCOME! You should pass the link around so all your friends can also have the image burned into their minds forever. Yup.

Julie: I didn't take you for the tar-loving type. Taro forever!

Diana: I need to make memories of eating at Beijing's Xinjiang restaurants. ...Which would involve going to Beijing. Hm. Someday? I hope.

the lamb color looks like char siu? like they do pork but lamb instead, right? then rolled in stuff after... [boy, i'm not normally so lousy at describing food!]

chris: Yeah, the color does look like char siu...well, some char siu. Not all char siu is quite this red I think?