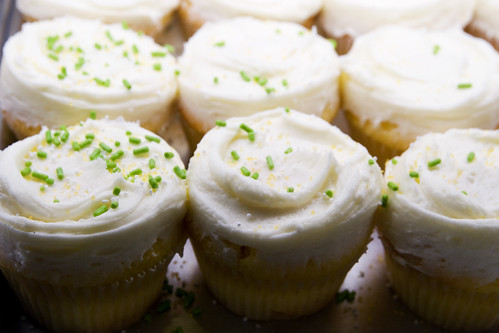 This morning on the way to lunch, I unintentionally passed the Brooklyn Flea at One Hanson Place, a fortuitous encounter since I had been meaning to visit it for weeks. I paused in front of the building for about five seconds, thinking, "Do I continue to the subway or get a cupcake?"

When in doubt, choose "cupcake."

I headed straight towards Kumquat Cupcakery's table in the basement. First bite of the day: mini chocolate-caramel cupcake nubbin. Mmmm. I prefer mini cupcakes over regular sized cupcakes for two reasons: mini cupcakes provide just the right amount of cake and frosting to satisfy my sweet tooth, unlike regular cupcakes, which I usually tire of by the last bite; and bakers who specialize in mini cupcakes (such as Nine Cakes and Cake Lab, in addition to Kumquat) seem to have higher standards for their two-bite desserts than those who make regular-sized cupcakes because they have to pack more awesomeness in a smaller package.

I continued to the N train to meet some friends at The Island of Taiwan Restaurant in Bay Ridge. Although I haven't edited my photos yet, you can get a taste (pun not intended, really) of things to come by checking out Danny's review. We ordered most of the same dishes and then some, except for the stinky tofu (er, I'll save that for next time) and the pork buns (I regretfully forgot to order them).

I spent the few hours between lunch and dinner by watching The Imaginarium of Doctor Parnassus with John and Claire, the effects of which were slight nausea from camera angle wooshiness, and the feeling that my imagination is seriously inadequate.

We took a short walk to Baohaus for dinner—making Taiwanese food the theme of the day—and tried everything on the menu (hey, it's a small menu). Review forthcoming on that as well.

And then I wanted another cupcake, mostly due to the proximity of Sugar Sweet Sunshine down the block from Baohaus. But as we peered through the windows shortly after 7 p.m., we were met with an unlit cupcake display, employees cleaning up the shop, and a door that wouldn't budge. NOOOO WUT IT'S ONLY 7 P.M. FUGGUHWUT. (Alright, bakeries are allowed to close earlier on Sundays.)

I quite like living in a city where the potential for such a day exists.

Sadness I couldn't make it :(

Ha--for a few weeks, my work's firewall was blocking flickr, so I couldn't read your blog (it's not the same without the photos). Flickr's re-enabled now, though. =D In the food/eating opportunity sense, I wish my city were more like your city. Luckily, the Chinese Cultural Center by the airport has both a Taiwanese deli and a bakery that serves cupcakes, all in the Chinese supermarket. It's not quite the same, though. And we definitely don't have supermarkets that serve British biscuits--we have to make a separate trip to World Market (aka Cost Plus) for those.

a cupcake topped with crispy pork intestines and pork belly

Julie: And in my city, you don't have to drive! :d ..A plus if you don't like driving, at least. I am sort of afraid that I'll forget how to drive if I don't do it again soon, though.

D: Aside from the pooptastic high rents, living here is SWEET!

haha
i like your last sentence.
i'm in taipei for holidays and cosmopolitan life is sweeet :)

when i first looked, i really thought those were chives on the cupcakes. but no thankfully they're green sprinkles.

Hey Robyn, love your blog!
I work next to a cupcake shop so I smell the baking when I walk by to get to my office every morning! I know I'm going to cave in one of these days...

Margaret: I know those cupcakes exist...but I haven't had one yet. I WILL GET MY CHANCE.

sophie: Taipei is great! At least, whatever I remember from my visit over ten years ago..pooo.

Julie: I hadn't seen it that way before! And now ..that is all I see.

So I had my guy pick up 2 cupcakes from Sugar Sweet Sunshine and I've got to say they were nowhere near as good as those from the Cupcake Café. Interesting flavor combos, yes, but no cigar. Just not rich enough.

Katie: This is gonna be THE FASTEST COMMENT REPLY I'VE EVER DONE maybe. :) But I have an immediate response, woo!

Cupcake Cafe. Okay. Gonna boil this down to personal preference since I generally prefer light cupcakes over rich. But besides that, the cupcakes I've had from Cupcake Cafe had an incredibly dense, sort of dry texture (I think it reminded me of cornbread) and were topped with frosting that tasted mostly like whipped butter (not that I'm against butter, just want more...sugar in the..butter). I suppose these two things equate to rich, but to my taste buds, it wasn't a pleasant sort of richness. Admittedly, I haven't eaten one of their cupcakes in a while so maybe they're better now. Not really dying to go back to find out though...

Err, I just wrote too much about a cupcake. :) Cupcake Cafe must have its fans or else it wouldn't be in business.

And while I'm still talking about Cupcake Cafe, don't get their doughnuts because they suck. Or they sucked in 2008 and I haven't felt the urge to go back and see if they've improved. If they don't suck anymore, let me know.

i totally agree- mini cupcakes have the best cake to icing ratio :O)

GOD I miss the Flea!! Have you bought the McClure's Bloody Mary Mix there yet? Dying to try it. McClure's anything is delicious, but I am dying to get my paws on that bloody mary mix.

Betty: Out of all the ratios in the world, that's quite an important one.

Amanda: Nope, haven't had that mix, but I don't like Bloody Marys so...probably won't try it. :P

I love cupcakes but my favorites are the chocolate cupcakes those are delicious and I have yo eat as much as I can because it is something that makes me feel in great.