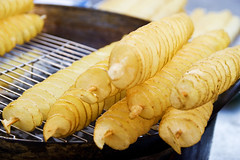 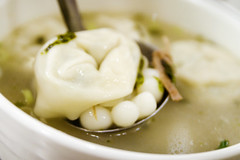 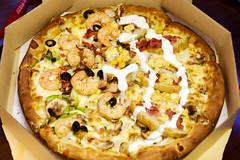 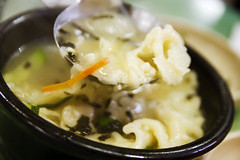 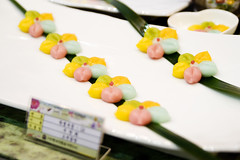 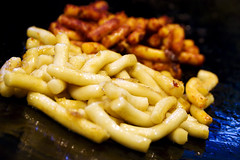 I know it's confusing that I've been writing about a week-long vacation in Iceland for the past month, but I've come to wonder how the hell anyone has time to blog when most of that time is taken up by work and sleep. ...And the other stuff in between, like when some friends and I watched Star Trek last night and afterward hung out at Gahm Mi Oak for almost three hours. Ooopssss.

And remember that in between going to Iceland and sitting on my butt (what I'm doing right now) I also went to Seoul? Yeah. I've been blogging about my trip to Korea on Serious Eats for the past few weeks, building up quite a list of posts in the process. If you don't check out Serious Eats every day (sob), here are some links to make your life easier:

If I've learned anything from writing these posts and trying to grasp at the few memories I can actually extract out of my head, it's that I need to take way more notes. Or at least ones that are more descriptive than, "FAT MANDOO."

so..
1. i subscribe to your blog, it's awesome.
2. i also subscribe to serious eats, and have been enjoying your articles on korean grub
3. i just recently started a foodie blog of my own, since i've been taking pictures of food (and eating lots, haha) since forever and figured it was time to put them to use instead of just staring at them on the computer when i'm bored (http://veryfoodieofyou.wordpress.com/)

because of the three reasons above, i'm curious how you got the opportunity to write for serious eats, and if it's your full time job? it seems awesome!

I think "FAT MANDOO" is plenty descriptive =P. Been loving the Seoul posts over on SE (also a little jealous lol).

oh i'm so jealous you went to korea and got to eat all things korean food. i haven't been back to seoul snice 2002 so staring at your lovely pictures suffices my craving for korean foods.

How I envy ur trip to the land of bulgogi, nyaengmun, mandu and sticky rice in spicy sauce.

linda: Thanks for reading my blog..AND serious eats! And now you shall feel the pain/joy with your blog HAHAHhauahaun.

As for how I got my job (yup, I'm full time), a bunch of people have asked me that. Which tells me I should write a post about it. :)

Dave: I really should've said how fat, like "AS FAT AS A FAT MOUSE" or "AS FAT AS A COOKIE THAT IS 4 INCHES IN DIAMETER"...sigh.

Reese: And hotteok! I love that stuff.

I swear I've seen those potato twizzley things on a Japanese TV show and they came out of a super special patent pending machine.

SE seriously eats my life whenever I go on there :):( And I became obsessed with finding something which appears to be impossible to find in England. Tkemali? I still haven't found any. Curse you and your food blog buddies.

(I love you all really)

"Fat Mandoo" is a very worthwhile phrase to share; I'm so glad you didn't keep it to yourself.

And thanks for introducing me (quite a while ago) to Serious Eats - you are a highlight of the site.

I want a bite of everything you have pictured, except those little weird candy things.

So much 2 do in life, so little relative time 2 do it.
We all need to step back, take a weekend off or more, and decide how we want to best use our time for Life.

I love girls who eat everything!

not to be confused with PON DE RIVER: http://www.youtube.com/watch?v=zZ17J5zb97Q

DID YOU EVER EAT YUKKAEJANG WHILE THERE?!?!?!!? IT'S THE MOST WONDERFUL SOUP IN THE WHOLE WIDE WORLD!

SuperChomp: At least England is closer to..the rest of Europe! Which is full of cool food? :)

Marsha: Fat Mandoo would be a good name for a pet. If its fat. "COME HERE, FAT MANDOO."

Cafe Observer: Right now I think I want to eat lots of things for the rest of my life, but I'm not sure how short my lifespan will be as a result of that....

..mrah whatever, I'll worry about it later.

OK! I'll work on getting a lion even if I have to steal it!

Mmm, son mandu (the technical name of the fat mandu you ate - much less exciting) Although we're very much in favor of the new name . . .perhaps we should change our own to FatManDu instead of FatManSeoul?
We thought we should mention a new food find related to your street food excursion: Ramen-encrusted corndogs. We'll have pics (and a taste test) soon . . .

Argh, Pizza Mayonnaise! At least its only on half the pizza. Good to see you got a good cross section of whats on offer while you were here.

Fatman: That would be a great blog name/nickname..hehehehe.

Ramen-encrusted corn dogs? WHAT THE HELL? Damn, the things I miss being in NYC.

Street Foodie: I like mayo! Actually that might have been some other on the pizza, but I forget what. It all blends together and then ye don't really know what you're eating.