These entries originally took place A GAZILLION YEARS AGO. This means I don't remember what I ate very well, but I'm posting the photos for record's sake. ...So...um...enjoy.

There's a group of restaurants I call "parent friendly," although I guess the cuisine classification is "New American." It's what I might suggest if you asked me, "Heeeey, my parents are coming from out of town and they like food, but nothing crazy, and the place should be sort of nice and not super cheap or too expensive. SUGGESTIONS?"

I don't have many of these kinds of restaurants under my belt, usually because New American isn't exactly a value-driven cuisine (not that there's anything wrong with that; just that in order to eat out so often I have to lean towards the cheap and delicious), but I visited two restaurants earlier this year that I would recommend. 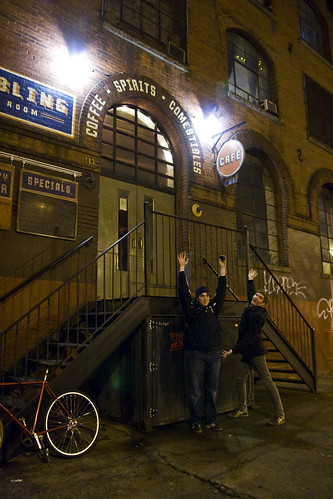 Although I had been interested in eating at Roebling Tea Room for a while—as I heard it was one of the nicer restaurants in Williamsburg—I never got a push to actually go there, despite living within walking distance. The occasion for eating dinner there two months ago was the arrival of the Jones' from Virginia for a vacation in their oldest son's (that is, Tristan, good friend and former roommate) adopted city. Tristan's family—mom, dad, and younger brother Fletcher—is the family I am closest to aside from my own. A meal with them is as important as a meal with my own family, but to eat with my family I have to go home to New Jersey, as they have collectively never (and probably won't ever) visited me in Brooklyn to share a meal. Sigh. Well, I think they love me, or something. 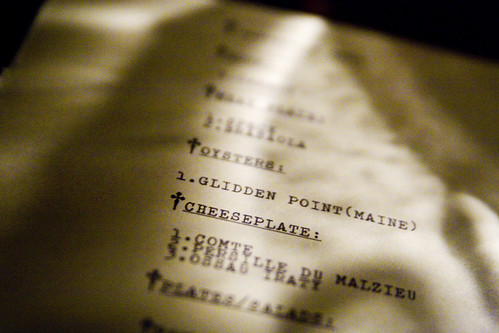 The setting of Roebling Tea Room is thoughtfully homey and cozy, like being in a refined country home. Not coffeehouse-casual, but far from being inaccessibly formal. Unfortunately, it was very, very dim (great for the atmosphere, less great if you want to be able to read anything in front of you), hence why I only have this photo of the menu by candlelight.

Considering that my meal is a bit outdated, the following dishes may not all appear on their current menu. Also, I couldn't tell you what everything tasted like (or describe them well because their website doesn't have a menu, crap) since I sampled things here and there, although I did take a photo of every dish on the table. To sum it up, the food was of the simple, well executed sort, like upscale comfort food. Many online reviews point out sub-par service, but our service was perfectly hospitable and not particularly sluggish despite the restaurant being full. I'd like to think that's the norm. 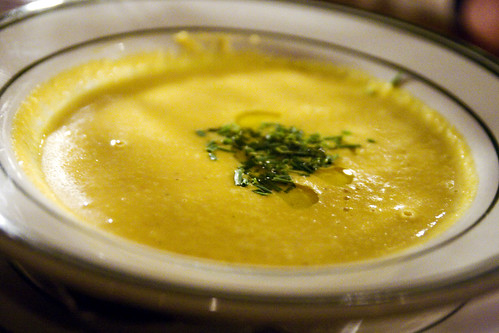 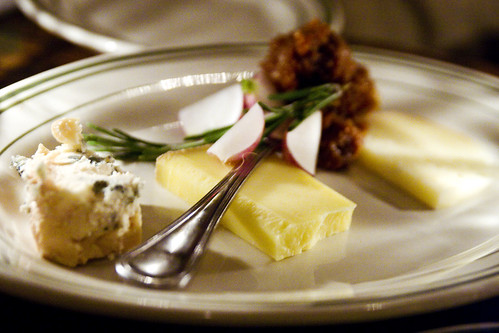 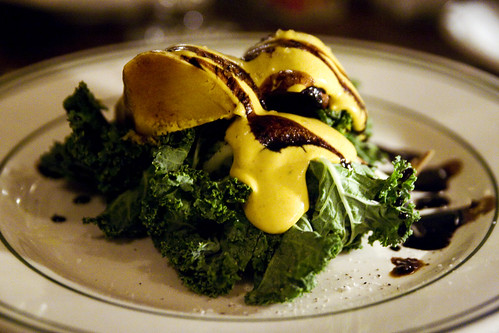 Squash salad of some sort = there be something pumpkin-like in there. 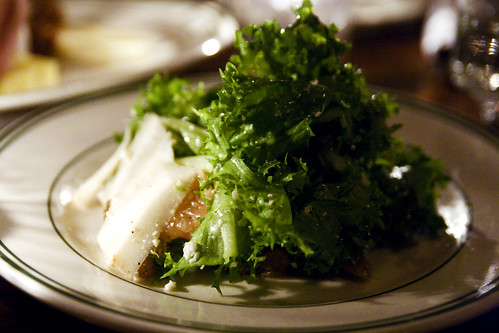 Another salad that appears to have grapefruit in it. OH GOD JUST LOOK AT THE PHOTO, skip the words... 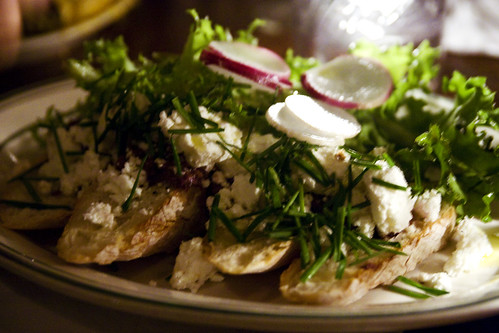 Goat cheese and tapanade on toast. 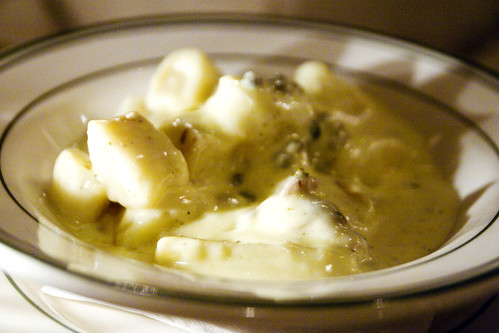 What is thar in these creamy plops? 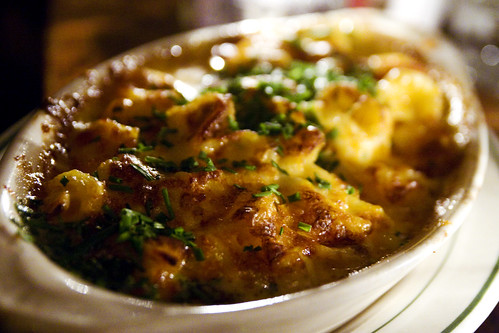 Macaroni and cheese of the super rich and cheesy sort with the nicely browned crust. Good stuff. You can even get it with bacon if you need an extra oomph of pork (which Fletcher did). 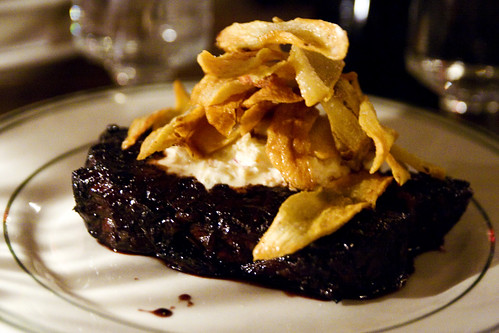 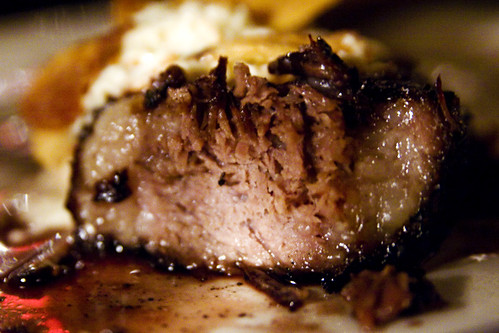 And finally, my dish, beef brisket with coleslaw (and chips of some sort), which was a special of the night. I rarely get to eat a big chunk of tender-as-butter beef oozing with fatty juices. It's gooood, although partially evil for being a sponge of meat and fat that felt so deceptively light on my belly. 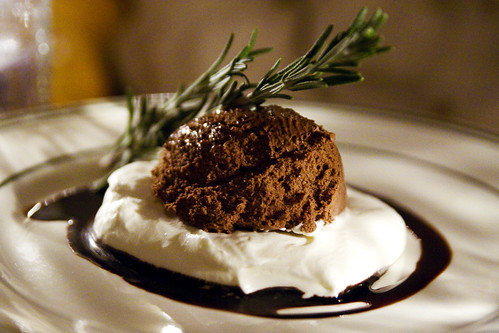 We shared a chocolate mousse for dessert, but you can probably skip this.

And that is what I ate two freakin' months ago. At least I have it archived now, even if in an insubstantial way. Many thanks to the Jones' for introducing me to a new restaurant. 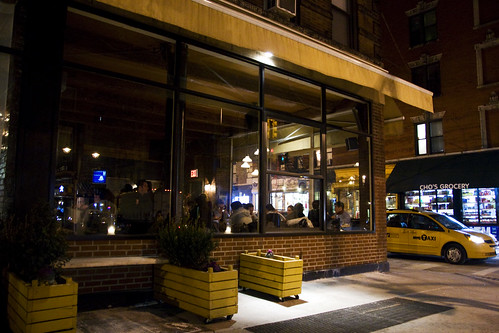 That used to be Shopsin's! Sigh.

Kathy, Jessica, and I found ourselves at Market Table after a failed attempt to eat at the fully booked Hakata Tonton. Not that Market Table is comparable to a Japanese restaurant specializing in pig's feet—we saw it as a mid-priced Blue Ribbon-esque alternative. Kathy and I have been to Blue Ribbon too many times as our go-to "nice" restaurant, and as much as we love it, it would've been lame to go there again when the point of eating out for us is to try new things.

The three of us ate a reasonable meal by sharing two appetizers, three sides, and one main. Anyone who likes to share is welcome at our table. 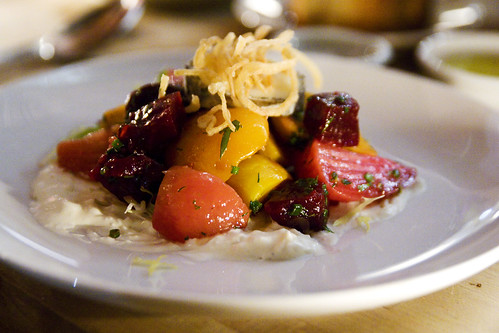 Beet salad: This special of the night consisted of three kinds of beets with horseradish sauce, goat cheese, and crispy shallots. Simple, good stuff. If I never had the experience of preparing beets, I might feel compelled to eat them more often. The memory that sticks out is having hands covered in beet juice long after I tried to scrub off the remains, resulting in hands that looked like the key player in a bloody beating. 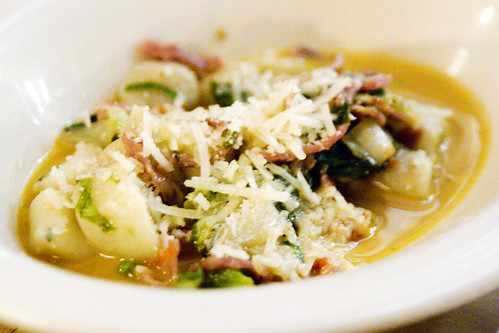 Gnocchi with proscuitto and escarole in a Parmesan broth: Kathy can never be happy with gnocchi since Don apparently makes the best kind. Doh! But combine anything with bits of cured pork and soak it in a cheesy soup and it'll taste good. 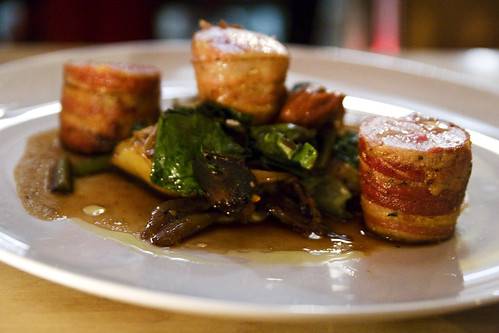 Pancetta wrapped pork tenderloin with banana fingerlings, fennel, and roasted tomato: Pork wrapped in pork. Yes. How nice that it worked out that each of us received our own pork knoblet. The pork was tender and saturated with juice in a way that was similar, but totally different from Roebling Tea Room's brisket—like the difference between a moist shortbread and a moist crumb cake. But in meat form. 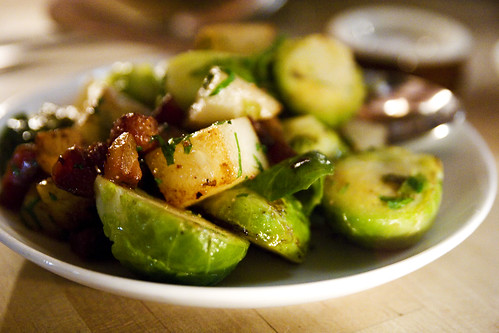 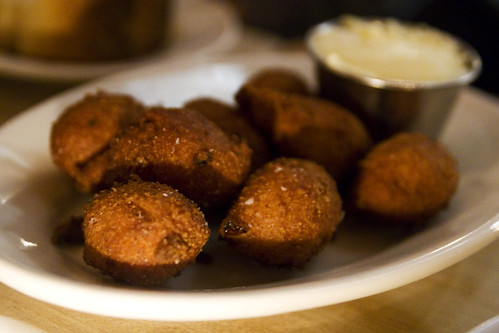 Hush puppies with clover honey butter: As I've only eaten hush puppies a handful of times in my life, I don't have much to compare these to. It was fried. It was carby. There wasn't much in it aside from the cornmeal stuff, but I can't really be opposed to deep fried carby anything. Slathering it with honey flavored butter made it way better. 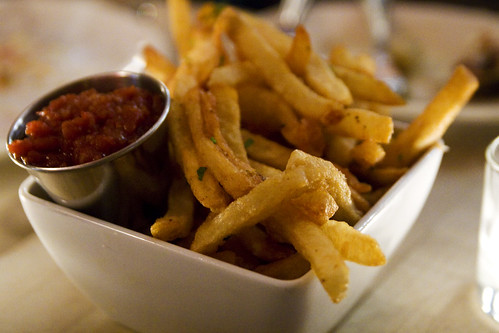 Old Bay fries with cocktail sauce: The fries were of the skinny, McDonald's-esque sort. Golden and crispy, nothing to complain about. But the cocktail sauce? Didn't work. The nature of the sauce was too wet and not clingy—fine for a tortilla chip, not good for a potato stick that has no wide areas to scoop sauce into. The chunky sauce would kind of slide off and fail to impart much flavor on the fries. Odd. Ketchup would've been better.

LOVE Old Bay fries. My go-to parent restaurant has always been Five Points...good noise level, good service, everyone can find something to eat. Might even work for cranky grandparents. For a more casual parent option I had a pretty decent experience at Vinegar Hill House...

FN: Oh crap...perhaps good service isn't the norm. :[ Or maybe they pay more attention when you're a party of five and look like a family. Not that it should matter. Doh!

Laura: Ah, I've heard good things about Five Points. Thanks for the recs!

FYI... in the Williamsburg, Dumont (over by Kelloggs at the Lorimer/Metropolitan stop) has the best Mac and Cheese I have found in NYC thus far... Hands down a better place than Roebling Tea Room.

re: beets buy some plastic gloves at your grocery store (the disposable kind) and peeling beets will be a snap.

kk: Oh man, I used to pass Dumont all the time (I would go to work from the Lorimer stop). Dooh! I'll have to check it out sometime.

rooney: If only my cooking class (during which massive beet staining occured) had given us gloves. :( Booooo.

nice pics for such a dim place. I had the baked brie a long time ago at the Roebling Tea. That was magical.

You did very well with the photography and/or photoshopping with the Tea Room photos considering it was candlelight!

The Market Table dishes sounds really interesting. I like fruit elements in my savoury dishes. I guess it's like apple sauce and pork, cranberry and turkey etc. Yums.

yesssssss, Robyn, you finally posted it! :) i recommend the macaroni and cheese for anyone...unless you're vegan, of course..

Fletcher: Yeaah it just took me like 2 MONTHS! Haha..fail. I haven't had mac n cheese since then! More fail!

My parents loved Lomzynianka on Manhattan Ave (corner of Bedford by the farmers market at McCarren) when I took them recently. Cheap, too.