At this point in time, no one seems to equate hearing "kō," as in Co., with Company—the pizzeria opened by New York City's master of all things wheaty and yeasty, Jim Lahey—because everyone thinks you're talking about Momofuku Ko. Greg came up with a solution: call it Kump. 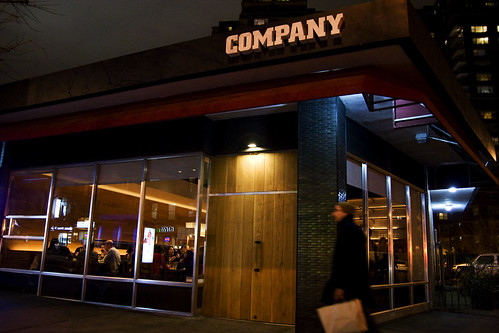 So we—Greg, Alice, Nick, and I—ate at Kump. After waiting for about an hour.

The four of us shared five pizzas. Not a bad haul. We all seemed to have different ratings for our favorite pizzas, but maybe that's a good sign; it means there's something for everyone. I particularly liked half of the pies are sauce-less, although tomato sauce lovers / cheese haters could have the opposite sentiment. 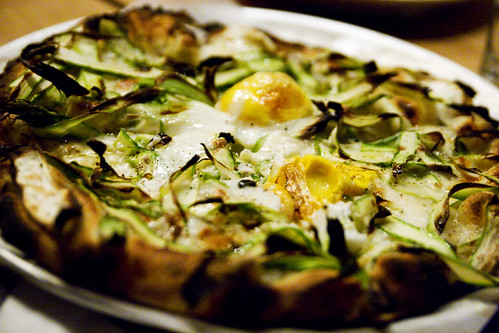 Special asparagus pie: (which may not be available anymore, ack) Asparagus, egg, garlic, buffalo mozzarella, and maybe other stuff, but it's not described on the menu so hell if I know ($18). This was my favorite pie of the night. I liked the texture of the thin asparagus shavings, although I can't recall if I could taste much asparagus-y flavor. Of course, egg on just about anything = awesomer, so if you were like Nick and got an egg-less slice, you missed out on a definitive part of the deliciousness. Sorry, Nick. :( 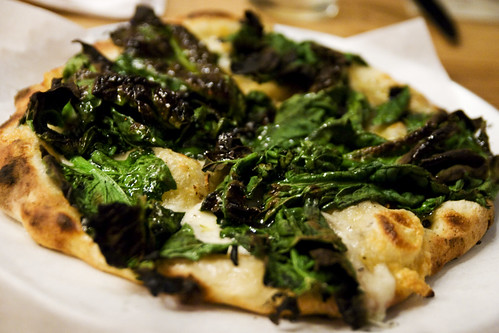 Popeye: Pecorino, Gruyère, buffalo mozzarella, spinach, black pepper, garlic ($17). My second favorite. Dough, cheese, and a layer of spinach leaves in various states of soft and charred. I didn't feel like the spinach made it too bitter (surprisingly, as I tend to be overly sensitive to bitter flavors), but the bitterness may turn of some taste buds. I also love arugula on pizza, even though I wouldn't want to eat a bowl of arugula by itself. It seems I just like the combination of bitter greens and sweet cheese. 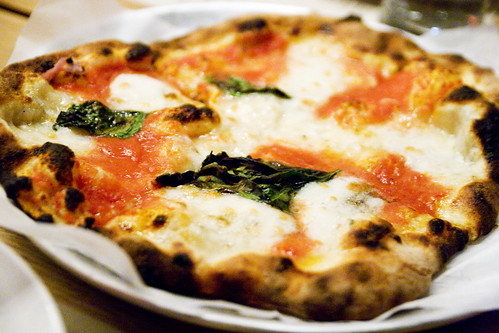 Margherita: Tomato, buffalo mozzarella, basil ($13). My favorite type of pie&mashnot necessarily from Kump, but in general. A thin layer of tomato sauce topped with plops of mozzarella. 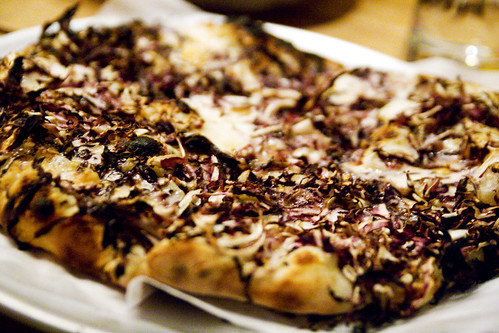 Santo: Bechamel, shaved radicchio, parmesan, taleggio, buffalo mozzarella, onions, and chili ($17). I can't remember much else from this pie besides that the finely shaved radicchio made for a nice texture. Looking on the bright side, that means it didn't leave a bad impression on me either. 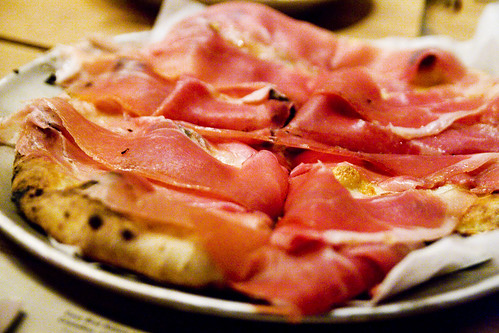 Ham and Cheese: Pecorino, Gruyère, buffalo mozzarella, prosciutto, and caraway ($14). Eat this as soon as it hits the table. The prosciutto stuck out too much after cooling off instead of complement the cheese and crust, as it should've. 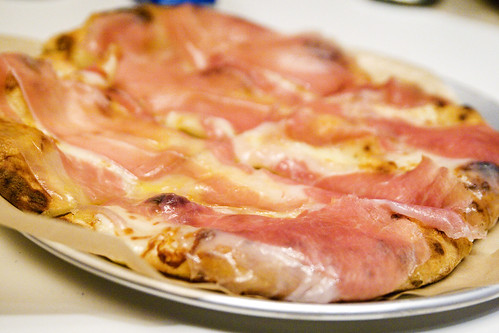 Or maybe I just got lucky the first time I tried it. There wasn't any off-putting chewiness, just warm porkiness blending with warm cheesiness. 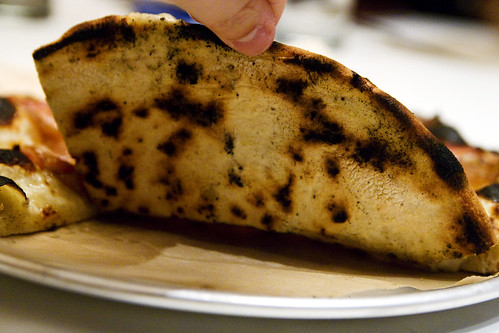 The prices may seem a bit steep, but as a flavorful, puffy, slightly chewy crust can be hard to come by—as usual, Jim's bread doesn't disappoint—and buffalo mozzarella is a most magical cheese, I thought it was worth my...dough. Ha ha ha. Haaah. (Yeah, I hate myself too.) Even if it didn't take me less than 10 minutes to walk there from my office, I'd see myself going back for another group pizza gorging session.

Oh my goodness. Asparagus and egg on pizza? I need this right now.

Oh damn, I was a block away from here today -- I wish I'd read this first. I ended up at Kofoo though, which is pretty darned good.

Mmm, that margherita pizza looks fantastic. There are few foods better than a perfect margherita.

justcooknyc: I used to go to Kofoo ALL THE TIIME! I wore it out, unfortunately...but I occasionally need to fulfill a kimbop craving.

What a coincidence--I have a batch of Jim's panettone rising in the oven right now!

That Popeye pizza looks so good...

The singe sort of puts me off, but I do like a nice bit of spinach. They look nice and rustic though :)

I couldn't agree with you more about the asparagus pie...that was easily my favorite pie of my night as well. I went on a Monday and there was no wait!

I loved the Santo the best.

And yes, I got screwed when I didn't get an egg.

SuperChomp: The singe is a nice touch! Of burning.

Laura: No wait...luckyyyy. It's definitely worth going if you don't have to wait, haha. Then again, waiting deepened my hunger. ;)

Nick: Catching up so VERY SLOWLYYY!!

We'll get you your egg someday. Somedaaaay.

Man, I really need to find a place that makes margherita pizzas here in Toronto. Like... REALLY need to (note the caps lock). *Drool*

Oh man.. the Margherita pizza looks so epic. Can I has?

Christine: There's gotta be some places! YOU WILL FIND!

Or just come here..I will get you da pizza, yes.

Dahan: Come over here! You can haz!