This entry originally took place on February 28. It's almost March on my blog! WOW!@#$%

After visiting the Mütter Museum and getting our fill of diseased organs and deformed fetuses (it's a "must visit" though, unless you are especially squeamish), Alex and I went to Reading Terminal Market to meet some of his friends...and so I could get my pork on. 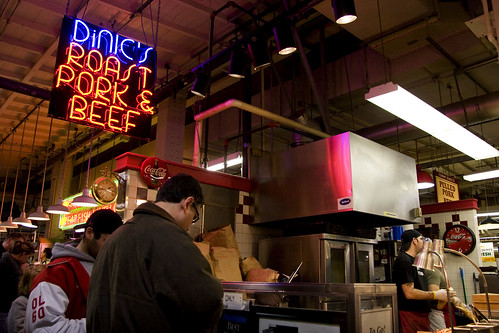 I followed Joy Manning's recommendation to head to DiNic's for a roast pork and broccoli rabe sandwich. Alex's friend Mark joined me in line to do the same. 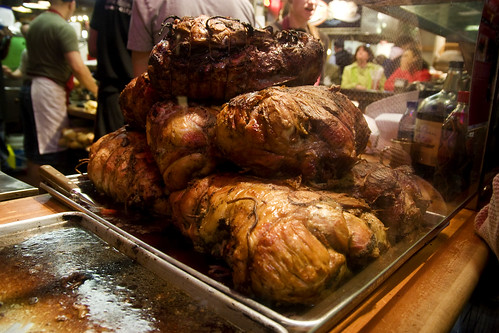 The pile of bulging roasted meat chunks threatening to break out of the strings securing their juicy centers was quite distracting. 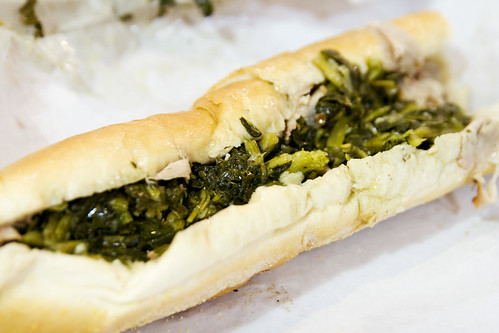 This doesn't show you how big it was. ...It was quite big.

But I led us astray, as I forgot that the holy trinity of the Philadelphian roast pork sandwich is roast pork, broccoli rabe, and provolone cheese. Fail. Not that it didn't taste good, although I wouldn't say it blew me away. 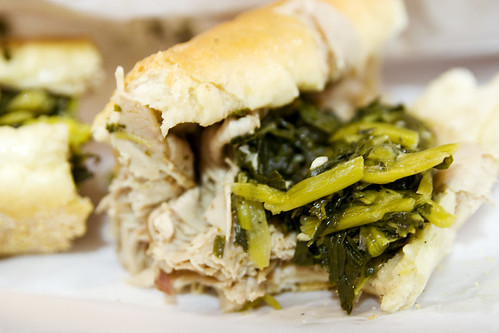 The tender, thinly sliced pork somehow managed to be full of porky juices and taste just a smidge dry at the same time. There was plenty-o-pork juice to go around—that the bread was semi-disintegrating from it showed just how much. Yet there was a tinge of dryness that didn't seem to make much sense. Still, I ate the whole thing quite happily, until a few seconds after polishing it off and grabbing my stomach while going, "Uunnngnggnn" because a whole DiNic's sandwich is about 100% more sandwich than anyone should eat in one sitting. 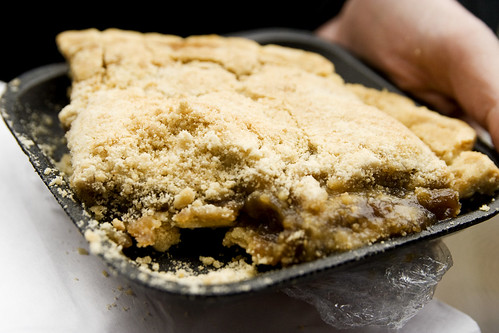 Alex's friend Penelope really, really wanted a shoo-fly pie. ("But Robyn, didn't you want one too?" Hey dudes, I WAS REALLY FULL. I have limits, as imposed by my tepid metabolism.) I tried a bite of pie, which was like pecan pie without the pecans. Which means it was like sweet goo pie. Nothing wrong with that. 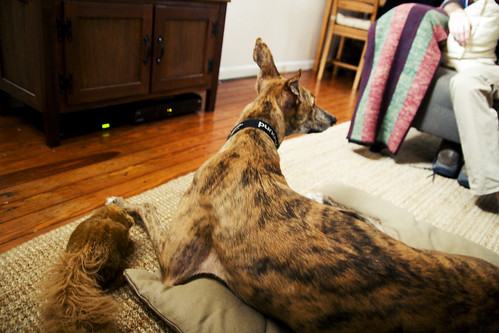 We digested by hanging out at Mark and his boyfriend Kris's apartment, which involved a lot of ooh-ing and ahh-ing at their new Greyhound—until he farted, at which point then it switched to, "Uuunng the dog farted." (But we continue to love him despite his stinkiness because he's very, very cute.)

Humanity can be proud, for it has spawned Barbarella.

And then it switched to Barbarella, simultaneously one of the worst and best movies I've ever seen, the latter being because of the first. The music was definitely A+. 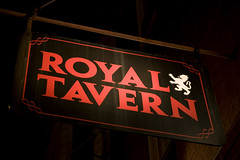 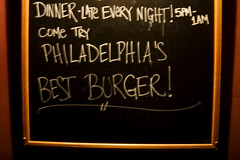 Kris, Alex, and I went to Royal Tavern, mostly because it was a short walk away, but also because they had a burger—one of the city's best, according to their chalkboard. 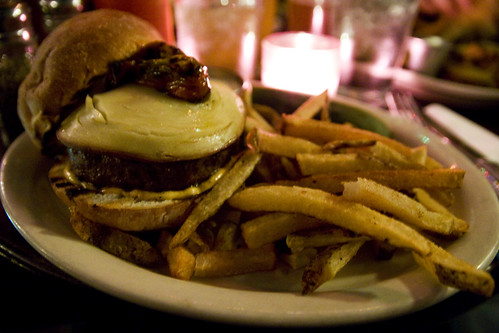 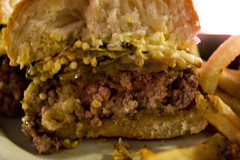 Unfortunately, I couldn't say this is one of the best burgers in Philadelphia. Not that it's bad—it would fulfill a burger craving. Their eight-ounce Angus burger came with caramelized onions, smoked gouda, pickled longhots, and chile mayonnaise on a toasted brioche bun. It also comes with bacon by default, but as I tend to find bacon too overwhelming when all I really want to taste is cow, I opted for a pork-less burger. While the patty was juicy enough—medium rare as always—it didn't have much flavor. The toppings helped, of course, particularly the mayo and the tongue-burning longhots. Otherwise, it was rather bland. Thankfully the bun was fine and of the soft, mildly chewy variety. Bad buns can destroy a good patty; good buns can make an okay patty taste better. (I also wrote about this burger on AHT, with lots of feedback on where to go next on my burger hunt.)

We returned to Mark and Kris's abode to hang out with them (and their dog and cat) for a while before going home to fully digest. 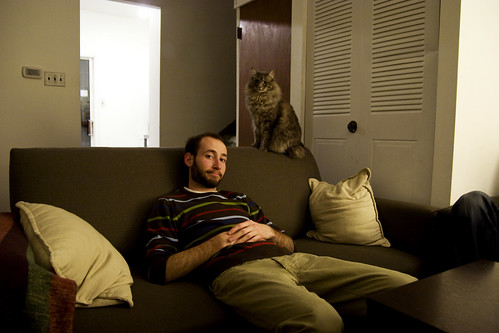 And to end this post, a sweet photo of Alex. With a cat lording over him.

DiNic's at Reading Terminal Market
There it is.

oh man haha i was just going to make a post on Reading Terminal too...and I just made a Capogiro one...even when were not in the same place at the same time, we end up eating the SAME THING.

Ahh I kind-of-sort-of-really-want-to go and swim in all that meat juice. It sounds so wrong yet so right..

OH. So my friend and I for spring break are going to go to NYC and eat from a few of the places mentioned in your blog. I will also go hunting to eat my very first MACARON.

puhahaha it will be fun.. and both of us will suffer at night due to indigestion. It's a risk I'm willing to take.

There's something about sandwiches in Philly...they are always really hyped and then never live up to expectations. The cheesesteak, hogie, pork and rabe...don't know what it is about that city (which by the way I love).

Greyhounds are wonderful dogs!!! My daughter & son-in-law adopted one about 2 years ago & it's like their child now. The coloring on the one in your photo is called grindle, don't ask me why. They're like no other dogs I've ever seen. They rarely bark, are very inquisitive, & lounge around like couch potatoes when they're not running around the back yard at dizzying speeds. Great companion dogs. If any of your readers are considering getting a dog in the future, please consider adopting a greyhound. You will be saving them from being destroyed & gain a very loyal pet in return. (And yes, they fart. Doesn't everyone?)

Kathy: WE ARE FOREVER CONNECTED by food preference.

Dahan: Oo you'll have to get your first macaron from MITZY!! Or La Maison du Chocolat if you can't get Mitzy's...but..yeah...YAY! Indigestion, here you come!

Laura: I haven't had a cheesesteak yet. I'll keep my expectations low! Woohoo.

Laurene: Oh yeah, there wasn't any barking going on. I didn't think about that! He would be very active one moment, then just lie down on the pillow and chill the next. And while everyone farts, I think this one farted a bit more than normal...since then Mark and Kris probably tried changing his food to see if it would make a difference. :)

The burger looks great! I have one question though.

Is that a squirrel next to the dog?? :o

I don't have a flickr account, but Alex's cat may be a Maine Coon. they have that beard/mane thing around their neck, and a white mouth.

Was the broccoli rabe bitter?

Funny enough, last night Alton Brown made shoo fly pie, so I have a recipe now should the urge to make it hit me suddenly.

Reading Terminal Market is awesome but if it was in NYC I'd probably never go. P.S. Amish breakfast!!!

Maja: It's a plush squirrel that squeaks, HAHAAHA! It was pretty cute when he would grab it with his mouth and we'd hear a faint [squeeak].

Angeline: The rabe was a little bitter. I wouldn't wanna eat rabe on its own but it's nice with..SWEET MEEATTZZ!

Justin: OOHH I forgot about getting an Amish breakfast...maybe next time.. :(

This looks so amazing!

lol. at first glance it appeared to be a deer and a squirrel in someones living room.

Ulla: You should visit Philly! LOTS OF FOOOD!

Vince: HAHA, yes, that would be quite an odd scene. But...ANYTHING CAN HAPPEN IN BOPPY WORLD.

omigod! i JUST saw this feature on the Mutter Museum on TV. I could spend hours there. I like...anatomy.

Next time you're in London, I recommend the Hunterian Museum.

That is an excessively huge pile of roasted meats o_o Kinda makes a person want to grab a whole one and sink their teeth (face?) into it.

adelyn: It was probably the longest time I spent in a museum considering how big it is. Which is, not very. But everything demands much staring...like...uh...giant malformed head, or tiny malformed head, or something else that is disease/malformed.

SuperChomp: I'd rather sink my face into a giant cake, but meat...can also work..