Note: This entry originally took place on November 9. Also, I found a new roommate, so I'm one step closer to getting a new apartment! Next step: finding the new apartment! 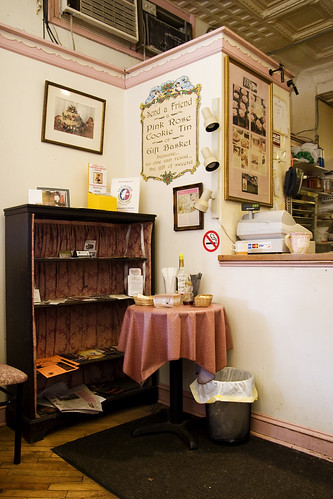 Another morning in Philly, another brunch down the hatch. Alex and I went to The Pink Rose per his friend's suggestion, where I planned on getting some sort of pastry to pad my stomach before getting a burger from Good Dog later in the afternoon. But the bakery's toasty interior and cheap breakfast menu lured us into their seats. 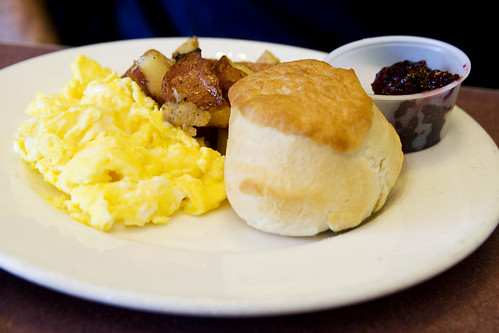 Alex went with a plate of scrambled eggs, roasted potatoes, and a biscuit accompanied by raspberry jam. Not a bad start to the day for only $4. We didn't think the biscuit look liked much at first, but man, we were wroooong. 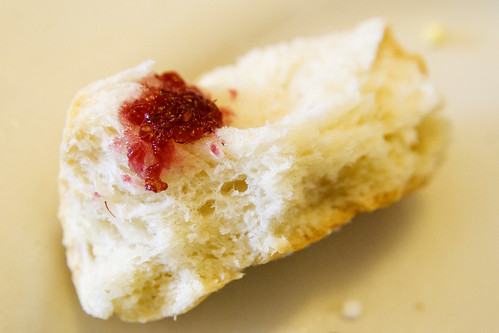 The biscuit was fucking delicious in a way completely unlike the biscuit from Morning Glory. The biscuit from the Pink Rose was this light, fluffy thing, not flaky, not cakey, just...some kind of magical bread. It was like biting into the pillowy, boneless head of an cherub. Which doesn't make any sense, but I really wanted to make a simile having to do with biting into something's head, and cherubs seemed safe since they're probably not real, meaning that you can't retort, "Uh uh, I've eaten a cherub's head and that biscuit tastes nothing like it." 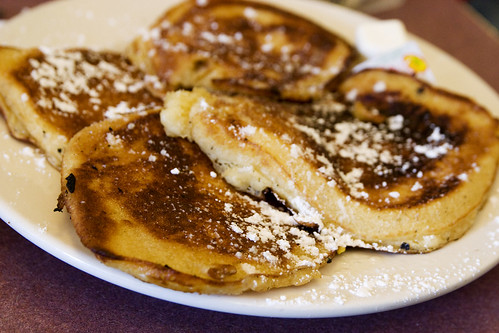 I got a plate of pancakes. I almost never get pancakes. But something (my stomach) told me, "Get the pancakes." I think they were $4.50 or some other cheap price unseen in Manhattan. They, too, were fucking delicious. Watch the carnage: 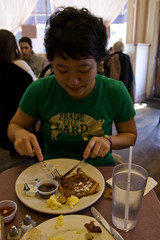 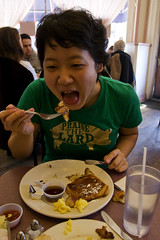 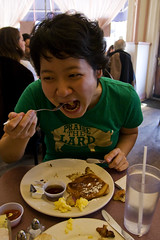 "Death of a Pancake in Three Scenes"

OH YES I KILLED IT. WITH MY GIANT MOUTH of doom.

The pancakes had a slightly crispy crust on the outside. And that made all the difference. Fluffy innards, crispy outtards. A dusting of powdered sugar, smidgens of butter, and a pool of maple syrup completed the pancake bliss.

We walked along South 9th Street to take a lookie at the Italian markets and whatnot. But I only took photos of these places: 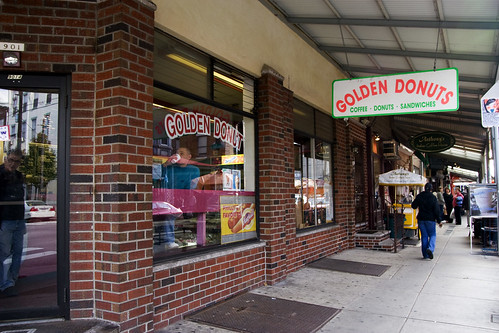 Unfortunately, we were too full to get anything from Golden Donuts 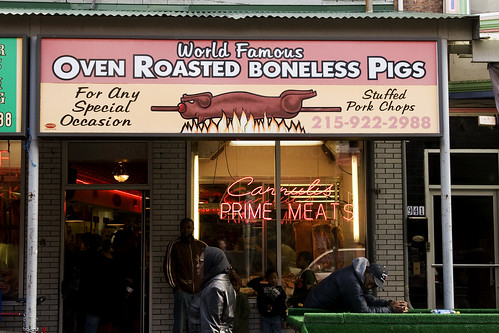 Definitely too full to get an oven roasted boneless pig from Cannuli's Meats. 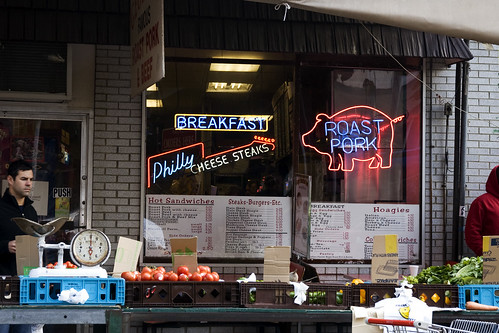 I kind of want that pig sign. So I can hang it in my window.

South 9th Street is definitely worth a closer look. We just roamed since we didn't have any specific destination in mind. If you have a suggestion—even better, one that involves pork—please let me know! 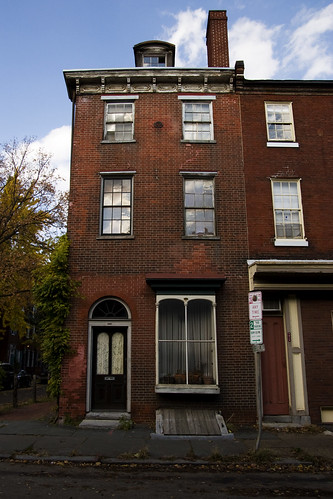 For no reason, here's a cute building. Many buildings in Philly were quite nice—with uniform heights, flower boxes, pretty shutters—unlike some of the buildings in my neighborhood that look post-apocalyptic. This one looked particularly old, but in a charming way. 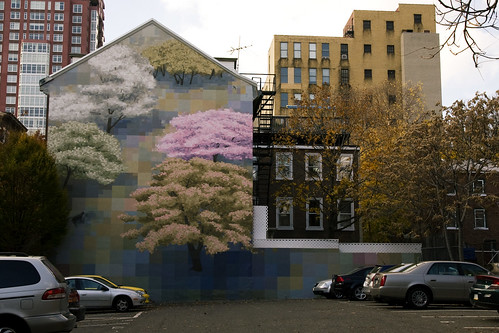 Another thing I love about Philly is the murals. Cool ones, like this semi-pixelated tree thing.

Besides being nice to look at, murals also make aesthetically pleasing backdrops for jumping photos. Observe: 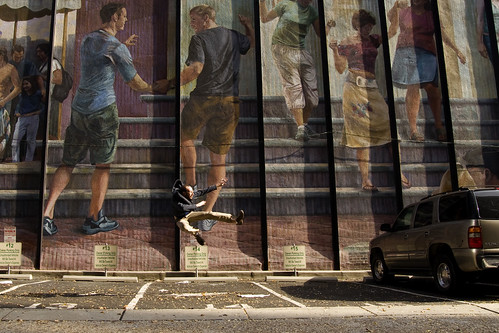 The SUV was just asking for us. (Full disclosure: I drive an SUV in New Jersey. It's useful in the snow. So the snow doesn't kill me.) 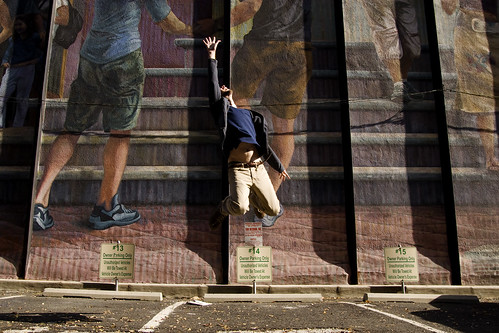 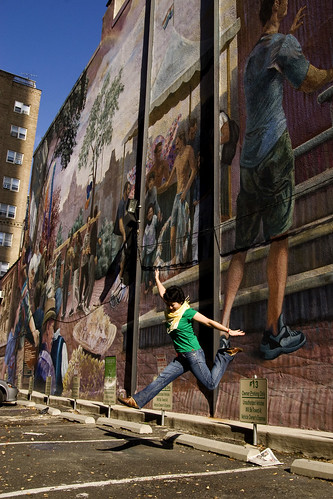 And that's me, doing something. My jumping poses are not nearly as creative as Alex's. 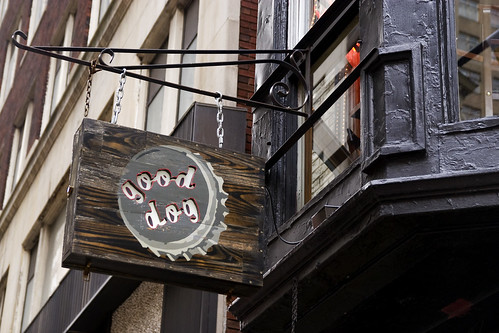 We went to Good Dog Bar for a Joy Manning-approved burger. And Alex came because he does whatever I say as long as there's an adequate vegetarian-friendly option available. Besides that he loves me! 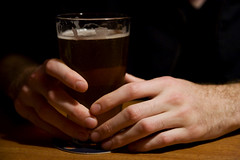 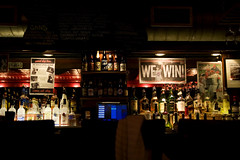 ...But he loves beer even more. Good Dog seems to have a good beer selection. 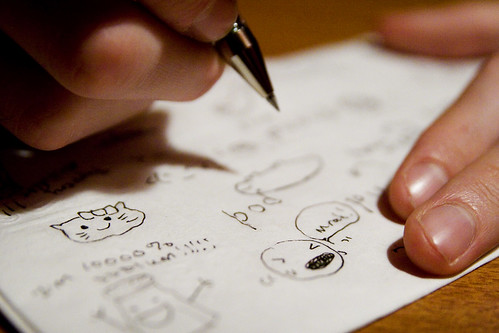 They also have napkins, so if you have a pen you can doodle to your heart's content. This is when Alex introduced me to the wonderous word that is "puond." My mind, oh, how it was blown. You can probably figure out why it's a cool word without me having to explain. It's also fun to say. 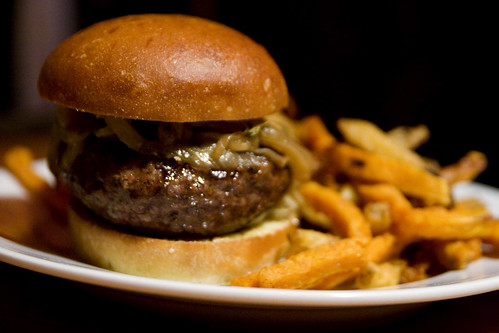 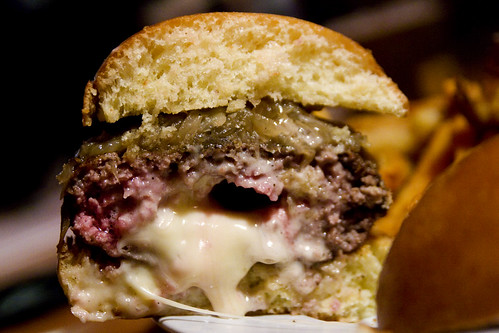 My Roquefort-stuffed, caramelized onion-topped burger was a beauty, but didn't taste as good as I was hoping for. Not that it tasted bad; hell, meat stuffed with molten cheese can't taste bad. I just felt like the cheese would've been better on top of the meat than inside, and even though it looks pink, the patty tasted a bit overdone to me. (Admittedly, it probably would've tasted better if I hadn't cut it in half first, releasing all the gooey cheese and meat juices in the process.) I wasn't sure what to expect, it being my first cheese-stuffed burger experience and all. Some more words at A Hamburger Today. 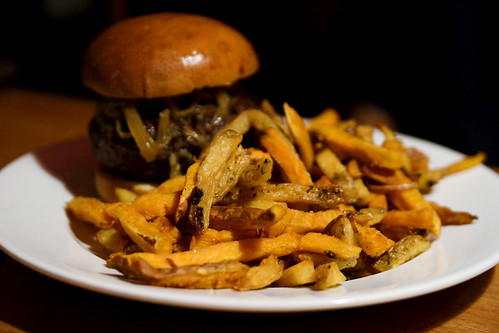 I liked that the burger came with a mix of sweet potato and regular potato fries. Too much of one would get tiring; put both together and you can eat it ALLLL. 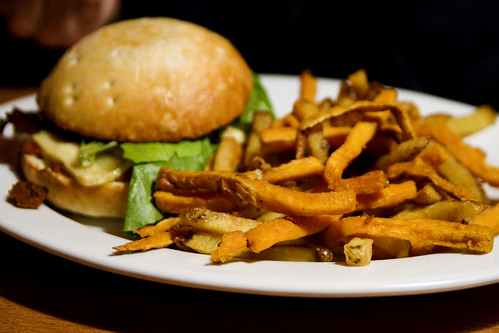 Alex seemed satisfied enough with his melted brie and sun dried tomato pesto sandwich. And by that, I mean he ate most of it.

Philadelphia gets a gazillion points in my book for being a good fooding city. I'll be back. And when I do, a cheesesteak will probably be involved.

THAT BISCUIT IS THE SEX.

There's also a place called the Chocolate Cafe (or Dessert Cafe, I can never quite remember) that I've been meaning to visit, and sounds like a place you'd like =D

Ok, it's called Naked Chocolate Cafe, I think. Here's a link to their site:

I have to say I'm not too wild about the swearing, young lady, and can only hope this is an experimental phase you are passing through.

I read your blog out loud to my six year-old daughter as an example of what she should be aspiring to.

You can make things right by sending me - ahem, my daughter - a signed photo.

Robyn, How the hell do you stay so frigging thin after eating so much??? Damn!

Fantastic food photos, love your descriptions. Cherub's head, sounds yummy. Since we are closer to Philly than NYC, I am already planning a visit to these fine establishments.

Golden Donuts, kinda heavy on the stomach eh? Ho ho! Are you still looking for a place? You're starting to post pics of houses now... Wish I could help you but commuting from Utrecht may be a bit much for you. Good post. Keep swearing, please, YOUNG LADY! *giggle*. SPOON! Bye!

SK: Yes, that sounds about right.

Nathalie: Is Cosi the sandwich place? Cos we have that in NYC too! :)

Ooh I think I went in and out of Naked Chocolate Cafe but was too full to try anything (yup, I fail). Cupcakes looked nice! Maybe next tiiiime.

The Inscrutable Chicken: ALL COMPLAINTS AND AUTOGRAPH REQUESTS MUST BE MADE IN WRITING, AND I MEAN HANDWRITTEN ON PAPER, AND MAILED TO A SECRET ADDRESS thaticannotrevealhere.

JC: I don't know! I beat the system! TEEHEEHEE!

My arteries are probably messed up.

Bonnie: YEAAH you should check out Philly for food. Cherub heads are delicious.

Sometimes swearing is the only way to convey how delicious something is. Until I get a bigger vocabulary.

Cherub heads?
They tastes like candy. I eat them for breakfast.

Mmmm. I think Philly looks like a good fooding city.

Trade you a signed photo for a box of macarons?

S. 9th St.- my suggestions (you knew I was going to give you some, didn't you?)- Sabrina's for breakfast/brunch, Rim Cafe for hot chocolate, DiBrunos for deli meats, Isgro's for cannolis/pastries (that's on 10th St., but close enough), and of course, the famous Pat's vs. Geno's cheesesteak controversy. There is a small place next door, called O' Sandwiches, that has banh mi, too. That's just for starters.

As for pork- this isn't on 9th Street, but it supposedly has really good roast pork sandwiches, according to my friends. It won a James Beard award(!)- http://www.johnsroastpork.com/

A good biscuit is something to behold. My biscuits were always so so, until I found Southern Biscuit Flour in of all places our local dollar store! I don't know what it is, but my biscuits are now fluffy and light. Reminds me I need to make them soon!

Oh, and if you could ship me that weeping cheeseburger, I'd appreciate it!

POTTYMOUTH!! Teehee. You NEVER curse!! Ohman, that means that the food must have been beyond normal outrageousness. Wow. Okay, guess it's time for a Philly roadtrip. =)

That brunch place looks cute and tasty but as an English guy i dont get what a biscuit is (in the UK a biscuit is more in line with a cookie). good luck finding an apartment

suze: It's happy weeping...oh wait, that doesn't really work. IT DOES NOW

Kate: What in the...how do I get cherub heads for breakfast? I want.

The Inscrutable Chicken: That is an acceptable offer.

yoko: Oo yay, thanks for the recs! Someone else mentioned John's to me. Maybe it was Ed. Mmmporkies.

Biz: So the secret to yummy biscuits is to find flour at the dollar store? Daaamn.

Kathryn: If I curse, you know it's good. Or that I was feeling particularly lazy.

Edd: Ah yeah, the biscuit..thing. I can understand your confusion; I guess American biscuits are kinda..scone-like. But not scones. When I talk about British biscuits I just flip a switch in my mind so I know I'm talking about custard cremes and digestives and whatnot. :)

you cant beat a custard cream (... well you can but there so british and somehow kitsch there great)

Heh, when I read 'Good Dog Burger' I thought that it must have actually been a bad dog to end up in a burger... Ha ha, I'm so funny.

But the bun on that burger looks really good, and definitely lacking the essence of sawdust that so many have! OMGooses, I am really hungry. =(

Edd: I FREAKIN LOVE CUSTARD CREAMS SO FREAKIN MUCH.

During my first visit to England, I gorged on biscuits. It was kind of gross. This was also around the time I got off a restricted diet...oops.

Christina: Sawdust bun? What horror-filled bun is that? I DO NOT LIKE THE SOUND OF SAWDUST BUN.

I still cannot wrap my brain around this "biscuit" business. It's just too scone-like *very-British-inner-torment* Gya~ah!
I find those murals somewhat creepy. I wonder if I have some sort of repressed fear of murals. Hmm. I think your jumping picture is ace though! I like the angular ...angles you're making :D

SuperChomp: Creepppy? NOOO!...okay some of them are creepy, like the ones with the giant people/heads looming over you. But the non-human ones are nice.

Lived there nine years, miss it. Love the food there. I was last in Philadelphia in February and did get to South Street and the Italian Market there (there was a great, cheap small herb store that sells great stuff, but I can't remember what it was called).

I haven't been to Pink Rose in ages but I remember it back when it only sold pastries. Next time I'm in town I will definitely go there for breakfast.