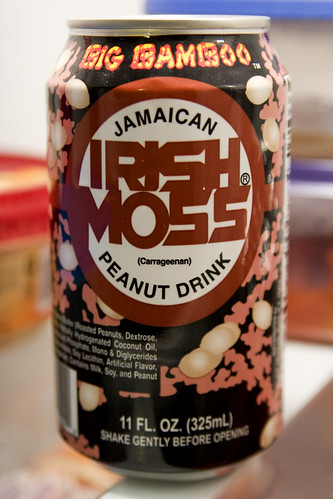 Although I'm not into alcoholic beverages, I will drink just about anything that doesn't contain alcohol at least once. If it doesn't sound too gross nor cost much nor pose an immediate threat to my health, at least.

While shopping at a bodega a block away from my apartment in search of Horlicks (they had it), I spotted a dusty can of Jamaican Irish Moss Peanut Drink. Never before had I consumed a beverage containing peanut butter and a seaweed-based gelling agent. Potentially tasty? Maybe. But it would only take a small investment to find out. 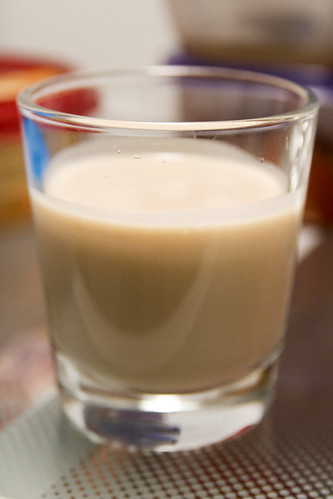 It poured out unsettlingly slowly, a bit thicker than crème anglaise. Not that I have anything against crème anglaise—I love it—it's just not something I would pour into a cup and drink. First thought: This is obviously not a thirst quencher. Second thought (mid-sip): Jesus christ, this is like drinking pudding. Like peanuty, not very sweet pudding. The substance appeared to be midway to something else—custard, sauce, bonding agent. What's it doing in a can?

I wouldn't say the drink is particularly bad. Or good. Or fulfills any craving for peanut, sweetness, or liquid. Maybe it would taste better as a hot, stomach-coating drink, like atol del elote. Or maybe it's unsalvageable. Does anyone out there have love for the gloopy peanut pseudo-liquid?

[I'm aware of Irish Moss's reputation as an aphrodisiac. Coupled with the name "Big Bamboo," this drink is a bit suggestive. But I'm almost 500% sure that it does nothing.]

Do you have a death wish, 'Boppy?

It looks like it came out of one or more oriphaces. :\

tbh, the allure of peanuts would've tricked me as well.

"Shake gently before opening", this will enhance your drinking experience...

You guys do drink egg nog around christmas time out of cups, isn't its consistency remotely similar to that of this peanut drink?

I don't know, it seems pretty sexy to me.... having my stomach full of peanut cream always sort of gets me in the mood. And how could you NOT get turned on by something that's the color of Cream of Wheat????

Peanut Drink almost sounds enticing tho the ingredient list put me off when I saw it contained coconut oil. Also the name Irish Moss sounds a little furry for the tongue.

Annie: Yup, yet I keep living!

Graeme: I shook it, but I'm not sure that did anything.

And I think I will ignore the orifices.

frenchie: This is way thicker than egg nog. Or rather, a different kind of thick. Egg nog reminds me more of a milkshake, which I wouldn't compare to pudding. But this was...puddingesque. ...I need a larger vocabulary to properly describe these things.

Kirby: You're right, WHAT A FOOL I HAVE BEEN!

Grommie: Coconut oil put you off? Most of the other ingredients would've put me off first I think, haha. I like coconut oil, not that I eat it very much. And yeah, Irish moss is not a great name for something in a drink.

To be fair, I would have drunk it. My friends tell me I am far too fearless when it comes to trying foods. I think it's a good thing (especially for a food blogger). Was the flavour roast-y? Or peanut butter-ish? It looks a bit like Baileys/other Irish cream in that glass.

You tried that weird aloe drink sold in a lot of convenience stores? There's even a light version now. I need to man up and just drink one.

SuperChomp: It wasn't roasty! Not even that peanut butter-ish. Kinda weak. Hm. I'll try whatever if it's not a bug, I think.

piccola: I've definitely had aloe drinks before, assuming there aren't that many of em. There's a light version? I didn't know it needed a light version!

This post made me laugh out loud. I like your philosophy of trying anything and I LOVE how you grasp at adjectives! Sometimes words really DON'T exist to describe certain things....

OMG. I had that @ an LA Jamaican restaurant once and ALMOST threw it up. But alas, I downed the can because my mom used to beat me for not finishing my food. *CRY*

There's a non-Irish moss version we had in Trinidad called "peanut punch"; it's much better! Less mucilage and more like a very thin peanut milkshake.

I love vanilla-flavored Jamaican Irish Moss drink. It does a *wonderful* job of relieving an upset stomach and soothing a sore throat - I guess since it's a thick starchy stuff.

Basil Seed Drink is also good for sore throats, but isn't much of a stomach remedy. It tastes quite a bit better than Irish Moss. I agree with you that Irish Moss is like drinking thin pudding. lol

I've not seen any peanut flavour at any stores in Nashville. The one odd peanut-related drink I've seen is made in Taiwan and called "Milk Drink" (I don't have a can handy to see what brand it is.) It's basically boiled green peanuts and sweetened milk. Very odd, but still good. Not something I'd drink every day though!!

Since you mentioned blancmange, I have an urge to go down the road to the little Mexican market and buy some of the home-made Flan they serve at lunchtime. Yea, not the same, but close enough.

This stuff grows on you. I tried it once a few months ago, and thought it was mediocre, but I found myself drawn back for more. It didn't really get good, though, until I realized that you can mix it (at about a 1-1 ratio) with rum, and it still won't affect the taste. :)

Irish Moss is extremely good for you way too many good things to list here look it up!

My, I am glad that you gave it a chance. Most people wont do that. As a Jamaican I might be a bit biased but dont take my word for it just google seamoss and see the nutrient content of this drink (sans the rum and sugar). I just made a large pitcher full and I am in heaven. One of the main ingredient is "linseed" AKA flax seed wow. its basical nothing new just with a different twist...add some rum, gin etc and bring it up a notch. BTW processed foods in can are not usually the best choice when tasing something new, stick to homemade.

I have tasted the canned Irish Moss and I think it is disgusting. I doesn't compare to the home made stuff. It doesn't look appealing when it is being prepared though it actually looks like snot

I absolutely loved this drink. My girlfriend and I think it's delicious. Neither of us noticed any aphrodisiac effects, but neither of us knew that this drink claimed to have one.

Grappling with the details of so many different individual policies can lead to a strong urge to pick the next one that sounds halfway reasonable. But halfway isn't good enough.

i'm jamaican
i hate the way this tastes!
but i know an amazing amount of men who drink this..for obvious reasons ;)

I tried this beverage, in vanilla, I think, rather than peanut --ABSOLUTELY DIVINE! Like liquid custard. Think of it as dessert you can drink. I don't buy it routinely because I don't like to drink my calories, so, more of a treat for me, like on my b-day or something

Well the taste something you either like or dislike, But it was worth trying,And after i finished it My crazy Cat Decided it would lick what was left in the cup, she seemed to like it better than i did so it must be OK for a cat to like it