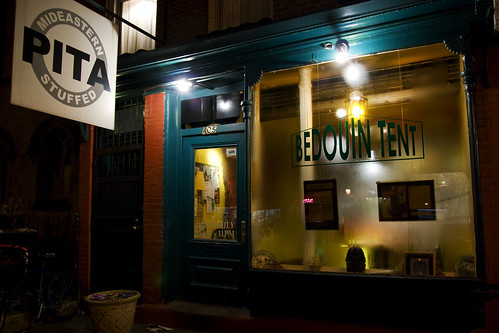 Bedouin Tent doesn't appear until the second half of this post, but I needed a photo to stick up here. SO HERE IT IS.

The goal on February 4 was not food-driven, but to go to Rocketship in Cobble Hill with Lee Anne to reconnect with old friend Arthur and to get my mitts on the latest volume of the Scott Pilgrim series—embarrassingly, a series I only started reading a few months ago despite hearing about it for years.

But in a way, it was nice to get to read the first four books in one go (one go = about a week) without waiting in anticipation for the next and then, when getting to the next book, forgetting everything that had happened in the last one. They provided me with many feelings of sunshiny happy "I CAN TAKE OVER THE WORLD, MAYBE," feelings at a time when I felt kind of the opposite. (This was around Christmas. The moving mixed with other crappies kind of...sucked.) Something about seeing a dimwitted guy like Scott Pilgrim destory evil ex-boyfriends to win the heart of a girl he instantly falls in love despite barely knowing her warms the darkest pits of my heart. (There's more to it than that—I just wanted to sum it up in one sentence.) It's HEEELARIOUS, I swear. Both the words and illustrations.

So we get to the store. We wait in the line that starts at the door, snakes around the interior—small, but well stocked—and ends with artist Brian Lee O'Malley sitting at a desk signing book. "Ohh I'll pick up the new book and everything will be dandy and weeeeoo!"

But no. The book sold out, an employee informed me. I was supposed to pre-order it. Oh. Epic. Fail. In response to the employee's doomful words, my heart sank and my brain seethed and twisted for a few quiet moments before I settled on buying a poster and a t-shirt in lieu of a book.

When we made it to the front of the line, I presented my poster while masking my inner woe and mild embarrassment. Brian and I were somewhat familiar with each other—we had met before at previous comic book-driven events, although never at his own comic book signing. As he signed my poster, we chatted about food a bit—he is aware of my meager food knowledge.

"Sooo I'm going to go home and cry because I don't have your new book, huhuhhehe um," I mindlessly blurted out.

"Oh, well you can have my copy," he said while reaching into his bag.

"I have loads of copies; it's no problem!" 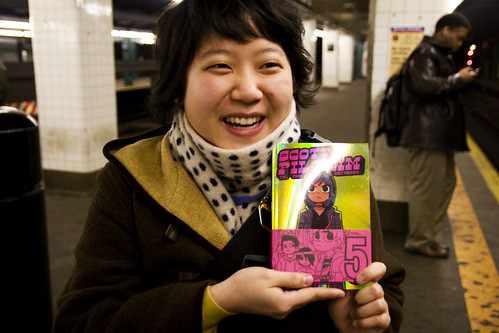 And so he very nicely and unexpectedly gave me a book, causing my heart to implode, which was not at all my intention (him giving me a book, not the heart implosion thing). Although if I've learned anything from past experiences, breaking out the crying card (I have no more cards, NO MORE) sometimes garners me free things that I don't necessarily deserve. While the free book initially brought on feelings of guilt, one of my friends helpfully pointed out that random good events do happen. For the most part, I only think random bad events are part of life's plan, not the good ones so much. Yes, I take my pessimism pills every morning.

Thanks to Brian's generosity, I finished the book the next day. And it was awesome. I'll make sure to pre-order volume six. (If you aren't yet convinced to purchase the Scott Pilgrim library for yourself, you can borrow my copies, which are sitting on the shelf in my living room. It helps if you know where I live though. ...Okay, maybe not.) 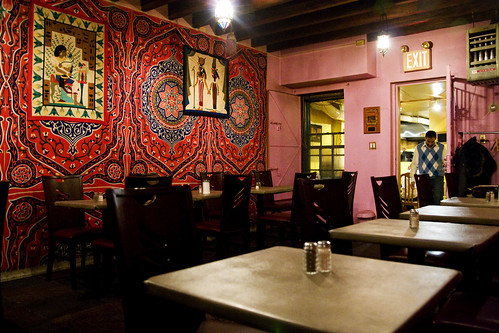 Riding the comic book high, Lee Anne, Arthur and I walked to Bedouin Tent for inexpensive, Middle Eastern noshings, per a recommendation from the Serious Eats community. The restaurant was quiet on a Wednesday night, although maybe it was a good thing so that no one else would see... 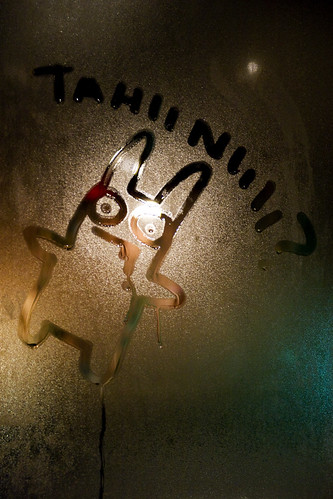 Lee Anne's window condensation drawing of a tahini-mad Poofy. The drawing didn't live long; she wiped it away in fear that we were desecrating the bedouin rugged interior. 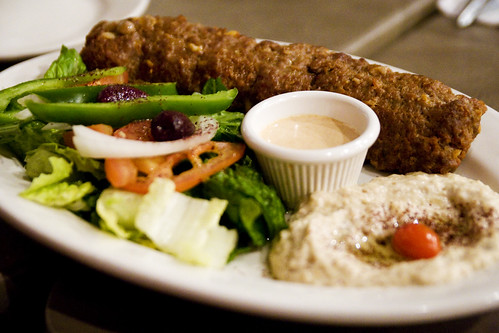 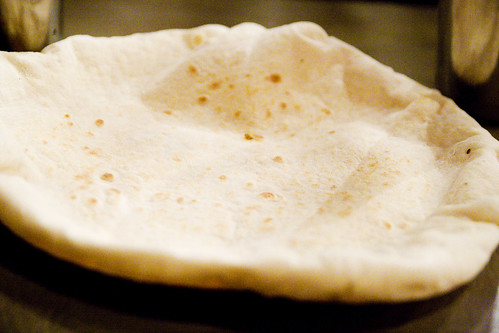 Lee Anne and I shared the merguez plate of spicy lamb sausage accompanied by a salad, baba ghanoush, and a fresh pita (along with a side of tahini at our request). Moist, spicy sausage and creamy eggplant mash rolled up in warm pita equals win! 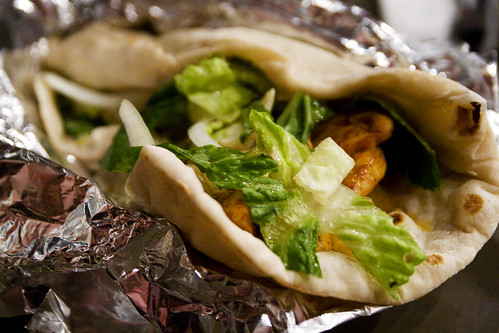 Arthur got the grilled chicken pita sandwich filled with grilled marinated chicken, lettuce, tomato, and tahini. He ate it all. Thumbs up. 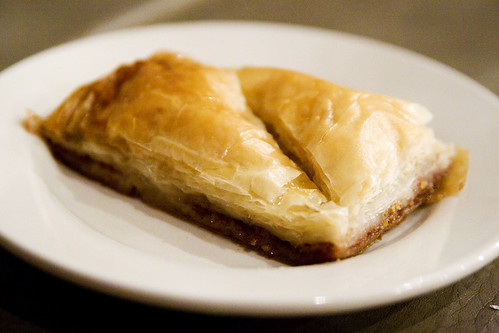 We ordered baklava for dessert, a nice rendition of the flaky pastry layered with phyllo dough and chopped walnuts flavored with cinnamon that wasn't overly soaked in sweet syrup. 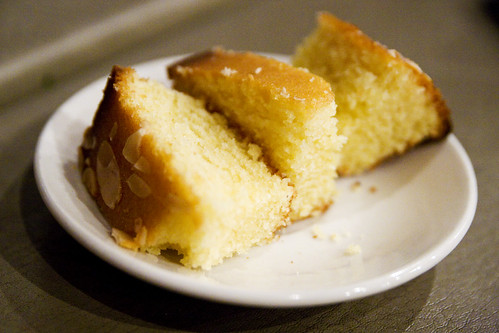 While eating our baklava, our waiter also brought us a plate of basbousa. Not knowing what I was eating, my first impression was that it was some sort of moist cornbread with a grainy, tender crumb, yet our waiter described it as "yogurt cake." My brain's response: "HUUUH?" Of course, after the Internet told me it's a semolina flour-based cake made with yogurt and sweetened with honey, it makes more sense.

When we got the bill, we found that we hadn't been charged for either dessert. We assumed not by mistake; the waiter (who may have been the restaurant's proprietor?) was exceptionally amiable. Not in the annoying overly imposing way, but kind of ....aware of us without us being aware of him. He felt warm and familiar, like some long lost uncle. I can't say that's something I run into very much.

I could see myself going back to Bedouin Tent for another hit of wallet-friendly pita + something delicious, but I have a lot more exploring to do in the Cobble/Boerum Hill/Carroll Gardens area. Suggestions are always welcome.

I love Bedouin Tent! You are making me miss Brooklyn.... Sad-boy time.

I can't believe we still haven't got a place like this here. Why oh why do they not find us worthy?

Fresh pita is so awesome, although it always makes me want to lay my face on it. Mmm, warmth.

Next time you go there, take home a couple of Bedouin Tent's spinach pies. They're different than the standard spinach pies - puffy pita, crispy on the bottom, filled with spinach and cheese - and they freeze beautifully. Beats the pants off any frozen spinach pie product.

I've only started hearing about the Scott Pilgrim series recently as well, don't worry about getting into it just now.

for some reason i'm stunned that my favorite food blogger is a fan of my favorite comic book series.

Me wants pita and baklava.

Was the waiter an older gentleman? Or cute? Or both? Awwww, that's so sweet.

I stumbled upon a post you did some time back about the Ridgewood tofu house, and decided to check out your blog (I was at that restaurant several weeks ago!)

I'm a fellow area foodie, and I recognize so many of the restaurants you've been to! It would be weird if I bumped into you :P

Robyn, if you come to Toronto, I'll give you the Scott Pilgrim tour of the city -- Sneaky Dee's, Casa Loma, Honest Ed's, the Dufferin Mall, etc. (BTW, they're shooting the film here right now.)

Incidentally, I don't know anyone who's managed to harness the vegan power...

FN: You make me miss Paris!

SuperChomp: That's one way to eat it.

Ira: Thanks for the rec!

Julie: I do love that story too. Sadly I haven't seen Even since then. That was a looong time ago...doh.

Nick: YOU CAN BORROW MAH BOOKS!

Mahar: Older, fatherly gentleman. ;) No date for you!

Erika: Thanks! I LOVE BUMPING INTO PEOPLE! It doesn't happen much. I guess NYC is rather big after all..hm.

Mikey: With good food, it's an unstoppable combination.

The vegan power is quite...powerful. I have not seen it in action.

I also haven't gotten into Scott Pilgram and I've been up in the comic book scene for years!

I may have it borrow it from you...

Wow... This story made me so jealous..
I have been a fan of Brian and his nice art and great comments since 2000. :) I have been a fan of you for about that long back when I bought a Poofy.
Anyhow, this was a great little story to read and think "wow! she really couldn't be any cooler"

Mmmmm. merguez. About as awesome as a sausage can get!

Oh babaganoush...I wonder if the supermarket eggplants in my Ohio town are up to it? I may be forced to find out.

Amy: You can borrow!

the poop: I first met Brian because he bought a poofy from me! Craazies. And OMG U LIKE MAH POOFIES? :D That's like...old school 'boppy. You win a gold star.

G: The other awesome sausage being CHINESE SAUSAGE. So awesome.

Louisa: You should..give those eggplants A NEW EXCITING LIFE! Mushy, but exciting.

My old hood! I was just at Rocketship last weekend, brought back good memories.

-Atlantic St. Fish and Chips
-Lucali
-that little banh mi sandwich joint right on Bergen St by the F stop
-Patois for brunch (is this place still open?! someone please tell me!)

the neighborhood's changed so much since I lived there three years ago, I don't know so many of the newer places.

Words and Steel: Thanks for the recs! I've been to Chip Shop but I don't know about the others. There are a looot of places to eat at in that area.