Notes 'n stuff: Updates may suck for a while as I've been sickly all week, yet still as busy as I would be under optimal nasal, throat, and brain functions. All function are currently sub-optimal. I'll try to go to bed before midnight tonight; maybe that'll help.

Also, hello to anyone who comes from 1010wins.com—even though you are probably only looking at this page for five seconds before realizing that it is not actually "Downright hilarious!" But thank you to whoever deemed it worthy of linking to. 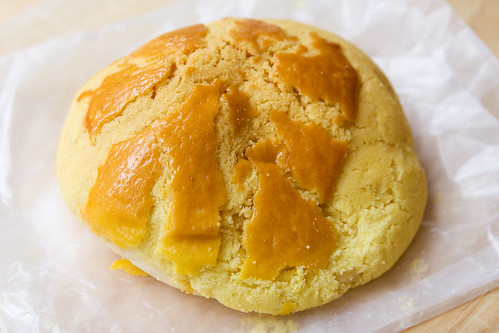 I feel ashamed to think that I spent all this time ("all this" = a bunch of years) exploring the vast world of Chinese bakeries and never knowing that the so called pineapple bun, or bolo bao, doesn't actually contain any pineapple—it derives its name from the pineapple-like appearance of its crackly domed surface. Oh. Ohh...kay. As I mentioned in today's Sugar Rush, I find that the pineapple comparison can sometimes be weaksauce (I'm not sure if "weaksauce" is a Serious Eats-approved term), but I guess it's more unique than "plain sweet bun," which may or may not look like a pineapple.

I've definitely eaten one before, unaware that there was a name for this fluffy, mildly chewilicious and sweet bun that would propel its outer crust bits all over your face, clothing, and maybe your hair. It's not my favorite kind of bun—I prefer the heavier red bean-filled and cream-filled varieties—but it's Michele's favorite, so for her last day as an in-office intern for Serious Eats, I got her some pineapple buns. (Actually, Lee Anne got them for me to give to Michele so I wouldn't have to wake up an hour earlier to get them before work, but...too much explaining. In conclusion, thank you, Lee Anne!)

I have a habit of picking out certain phrases I like and turning them into domain names. For fun. My life is non-stop excitement and debauchery. Yeah. Yesterday, for example, I lifted gentlysquish.com from the last step in Michelle's pork belly sandwich recipe. Here's a snippet of a conversation I had with Michele on AIM today regarding another domain name possibility, post-bolo bao comsumption.

Michele: it's the interwebs
same girls, but being gently squished

So someone out there should name their food blog bolobaodandruff.com and another should go with gentlysquish.com. Is all I'm saying.

Now I will go back to blowing my nose and shivering.

Oh I only found that out last year, so it's alright...hehehe

I've never been a fan of pineapple buns. Char siu bao and egg tarts are clearly the best things out of a Chinese bakery. Cocktail buns aren't bad either. Yums :d

I was at someone's house and then a few people got hungry so two people went out to buy buns much like the ones mentioned in this entry. I believe my exact words were "Wow we are so Asian."

I like custard buns and the seafood buns with green onions.

louanne: I haven't had one with roast pork in it...oo..

Angeline: That's one way to measure Asian-ness...if the first thing you get to placate rumbly tummies is a bunch of pineapple buns. ;)

lol.. pineapple buns.. love them. there's also a japanese version(prob. the same thing) called "melon-pan" but it also has no melon.

i like the ones with the dry pork "sung"

Grace: Oo I like melon pan! It's kinda melon flavored, isn't it? ...I obviously haven't eaten one in a loong time.

Lick My Spoon: Yeah, I like it better when there's a belly of CREAAAM!