It seems like most people have the impression that I have some kind of crazy awesome Thanksgiving because I love food. Alas, I love eating food; I'm not very good at cooking it. And while I usually consider Thanksgiving as the one time a year I'll break out my meager baking and cooking chops, this year I was all about sleeping in late and prostrating myself on the couch back at home in New Jersey. 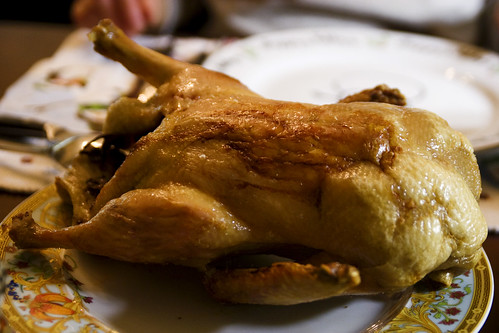 Since Thanksgiving dinner only had to serve my mom, my brother Hubert, and me, my mom roasted a small duck instead of the traditional "turkey that is so huge you end up eating leftovers for a week or two to fulfill your turkey intake quota for the year." The moist meat was covered by a layer of crispy, pillowy fat. Thumbs up. Although I like having an excuse to eat turkey once a year, duck probably tastes better. 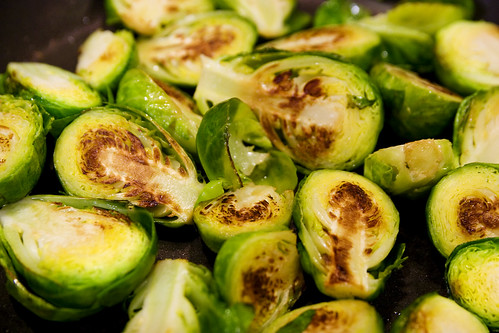 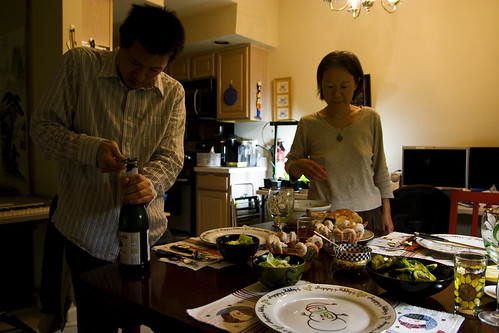 There's Hubert and my mom. They've generally always been slim. Where the hell did my genes come from? (Admittedly, I probably eat a lot more than they do; if anything, I'm lucky I'm not terribly obese.)

My mom also made salads, shrimp cocktails, and an orange-flavored gravy. I made a big bowl of garlic mashed potatoes (recipe here) without my potato masher, which resulted in some serious chunks. It was at room temperature by the time I ate it since I made it too early, and as I have no sense of how to season things to taste, it was rather bland. While it didn't taste bad, it's main title was "carbohydrate filler," not "deliciously creamy potato thing." Eh well. 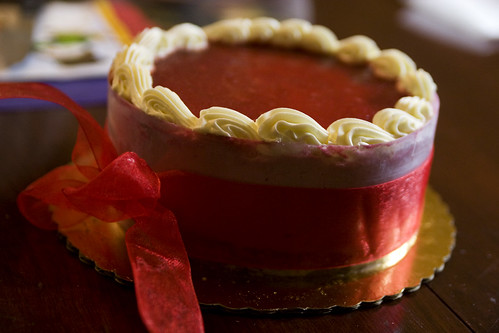 I wasn't in the mood to bake a pie, so my mom bought a mousse cake from Whole Foods. It was alright. Or rather, it wasn't that good, but I just needed something sweet to finish off the meal with or else the night would have felt incomplete.

My appetite was pretty weaksauce. It probably had something to do with the minimal muscle exertion.

After eating the slice of cake, I passed out on the couch for an hour and woke up feeling ravenous. Actually, I woke up extremely confused ("What time is it what happened do I have to pee where am I WHAAA") and then ravenous. Naps totally fuck with my internal clock.

And that was my Thanksgiving. It was comfortable, low-key, and didn't result in a terribly bloated stomach. 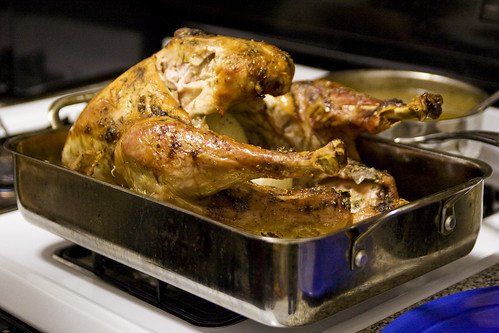 Of course, turkey was the meaty centerpiece. It was moist—hooray! 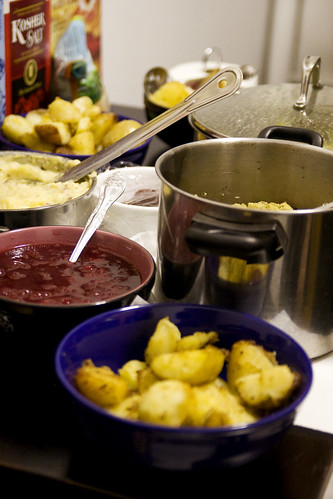 There was also stuffing, cranberry sauce, gravy, mashed potatoes, and three (or was it four?) kinds of roasted potatoes. The roasted potatoes were my favorite dish: crisp on the outside, soft and fluffy on the inside. 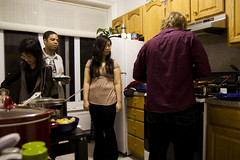 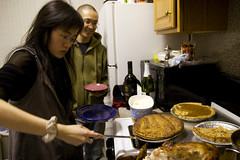 Everyone gather round in the kitchen

For dessert, we had a pie buffet accompanied by vanilla ice cream. Hehe. Hehehe. As much as I would've loved to have indulged in the bounty of pies—pumpkin, apple, sweet potato, and maybe more pumpkin—I was too full to eat more than a slice of pumpkin pie. Or maybe two slices. My memory is fuzzy.

And then I somehow dragged my lumbering body to the subway station and made it back to Williamsburg.

That was awesome Robyn! Pure entertainment. From a sad Thanksgiving experience one night, to a night of pumpkin pie, roasted potatoes and more pumpkin. Heh. *Stomach grumbling*

I've always liked roasted potatoes. There are so many different ways you can spice them... too many choices! I'm thinking of bringing up the idea of having roasted potatoes this Christmas now... what seasonings do you recommend?

Oh man, I LOVE that snowman plate at the bottom center of your "hello fam-fam!" photo - so kyoot! ^_^

a pie BUFFET?! and yet only one slice consumed ah the sadness!

I've only just started thinking about Christmas dinner and this has put some ideas into my head! Thanks!

Whaaaaa, you didn't even try the sweet potato pie? WHYYYYYYY!! I'm going to have to take away coolness points for that, Robyn. *Shakes head in solemn disappointment*

I got jealous when I saw you'd had duck--I think I'd take duck over turkey any day.

I had two Thanksgivings, too--one at my place before Thanksgiving with my Hun and some friends since Hun couldn't come with me to my parents house for the actual T-day. We had smoked turkey legs and a leg of lamb. Actual Thanksgiving was a turkey that was four times bigger, and lots of gravy and rice, because YOM--that's the bestest Thansksgiving food ... EVAR.

A good way to warm up mashed pots is to keep them in a glass bowl over a pan of simmering water (like double-boiler style). That way you can reheat without making them gummy, which is what would happen in the microwave. Also just use salt and pepper as you're making them and adjust to your taste. You can do it!

Christine: I think I've made roasted potatoes once in my life, so I'm not the right person to ask.. :( And in the version I made I had to buy like 12 different herbs and spices. Yeah. Unfortunately, I didn't need most of those ever again and they sat in my cupboard sad and unused.

Kathy: I DIDN'T EVEN NOTICE THAT. My mom loves cute things.

Su-Lin: Glad I could help! I am totally not thinking of Christmas dinner yet. :P

Jesse: NooooONO HOW CAN I REGAIN POINTS?!

Clare: Ahh, sounds like a good idea! Someday I will figure out how to salt and pepper things correctly...

i made those brussels sprouts for thanksgiving too, i seriously never realized how good they could be!

and i saw in your previous post that you're moving to bed-stuy - welcome to the neighborhood! i live over by the myrtle-willougby G, close to the south williamsburg border. get used to the crap people give you when you tell them where you're living, because it'll happen a lot. BUT i've been here for almost 9 months and i like it a lot, there's a lot of beauty here that goes unappreciated by most people in new york and there's some good food as well! bread stuy is over in your direction and it's pretty awesome. brook's valley is also worth checking out. happy moving!

Have you ever had Turducken? My parents bought it once on a whim (after meticulous planning and weighing the options of course). I have to say I was disappointed, there was a LOT of this weird tasting sausage between the layers and the layers of meat didn't stay together. I think there was more sausage than turkey, duck and chicken.

Everything at both your meals looks good.

p.s. I've given you an award http://notanotheromnivore.blogspot.com/2008/12/thank-you-for-blogging.html

Sarah: Wuuuh I have two good friends who live off the Myrtle-Willoughby G (John and Claire, who have appeared in this blog are random times). MAYBE YOU'VE CROSSED PATHS! I occasionally visit John. I feel fine over there. His apartment is quite homey, heh.

Angeline: I haven't had turducken! I wouldn't mind trying it, but I definitely don't want to make one myself. It seems more of a novelty than something tasty. Just..a meat splosion? :)

pie buffet??? where do i find friends like that? or strangers, i dont care, as long as they have multiple types of pie.

Roast duck instead of turkey - SO CHINESE! I had a conversation with my family just the other day about maybe doing a traditional (British) Xmas dinner and the words "why not just do a duck" were uttered. The only way you could have topped that would be by having lobster :)

SuperChomp: Oh man, I'm not a lobster fan. I can't get the meats out, at least. So much fail. But if someone did it for me, I guess I'd be okay with it!

I could definitely do that. Definitely.

2 Thanksgivings?! I don't think my poor stomach could handle it...

Kate: Your body burns calories in between the Thanksgivings. YOU CAN DO IT.