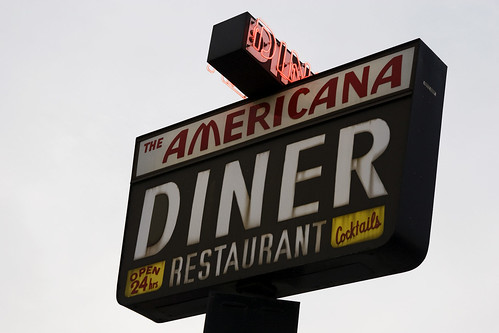 I want one of these signs. In my window.

"In your review you can write, 'My whiny friend made me eat at this diner.'"

And that's how Ken and I ended up at Americana Diner in Bay Ridge during this past Saturday's chilly afternoon. We had been wandering for miles upon miles across scorched earth with only a vial of water to share between us about one and a half miles past countless restaurants in search of an adequate lunch with only Ken's stomach to guide us. What did it (repeatedly) say? "Tuna melt."

Actually, it was probably yelling, "HOLY SHIT, I AM SO FUCKING HUNGRY, OH GOD, GIVE ME A GODDAMN TUNA MELT BEFORE I START KILLING PEOPLE," but Ken toned it down to a PG-rating. 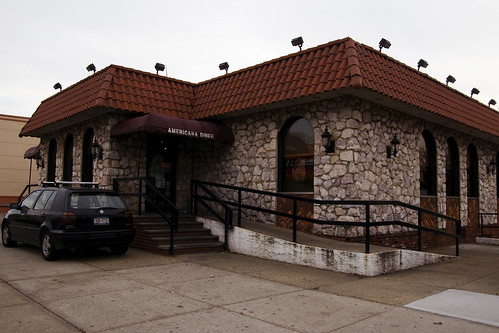 There she is. What a beaut.

When Americana Diner crossed our paths, my first thought was, "Am I still in New York City?" Barely. It looked like it came straight out of the suburban New Jersey of my youth and semi-present. I rarely went to diners as a teenager—didn't really have any friends in high school to eat with, you know, HA HA HA ha awkward (I'm not joking, but I should clarify that most of the hanging out I did was in New York City, not locked in my room)—so diners fail to hold any sort of special place in my heart. I just like knowing such places exist: thriving restaurants with impossibly large menus that are open 24/7 and don't look like they've updated their appearances in two or three decades. 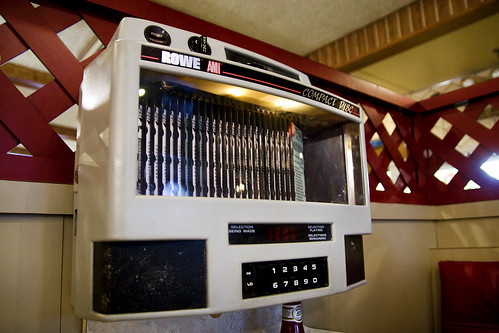 Where else would each table be equipped with a CD jukebox? 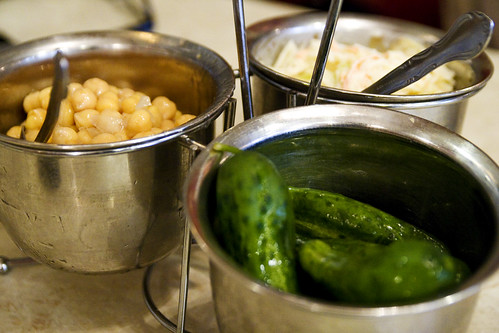 Are three little buckets containing pickles, chickpeas, and coleslaw a diner staple? (It's a serious question.) I had never seen such a thing until the waitress plopped the trio of sides on our table. It ain't Korean banchan, but it's way better than free bread. I passed the time by alternating mouthfuls of crunchy pickles and coleslaw with mashy chickpeas. 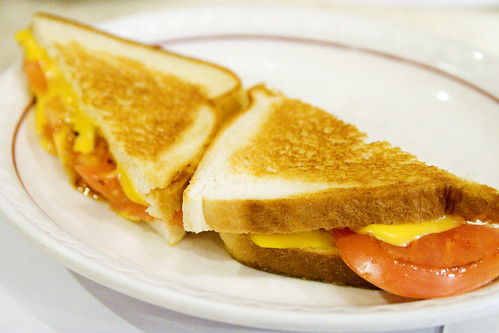 It's hard to mess up a grilled cheese sandwich. This was nothing special, but perfectly fine, fulfilling the main points of grilled cheese-dom: hot, gooey, cheesy, soft, slightly crunchy. I wouldn't have minded more butter on the bread, but I could say the same about most sandwiches, or anything involving butter. Grilled cheese sandwiches are the only sandwiches I will willingly ask to include raw tomatoes—the tomato's unappealingly slippery texture is canceled out by the molten cheese, whose glue-like properties keeps the tomato slices from slithering out the butt of the sandwich. (I hate the "tomato runs.") Cheese and bread alone tastes pretty good, but the tomato adds another level of...something. It just works. 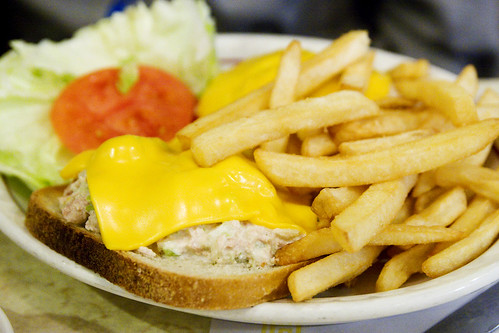 Ken fulfilled his tuna melt craving to an acceptable degree. He was hesitant to eat at a diner because he said no one in New York City makes tuna melts as well as they do in New Jersey. As he predicted, sometimes was missing from this tuna melt that only the Garden State's loving bosom could provide. I have no idea what; I'm not tuna melt connoisseur. It was still satisfying though, besides that Ken was starving and couldn't help could eat the whole thing. I helped by eating 75% of his fries—put crispy, fried sticks of potato in front of my face and you've sealed their fate of dying in a horrifically painful stomach acid bath. It's all fun and games until someone dies in a stomach acid bath. 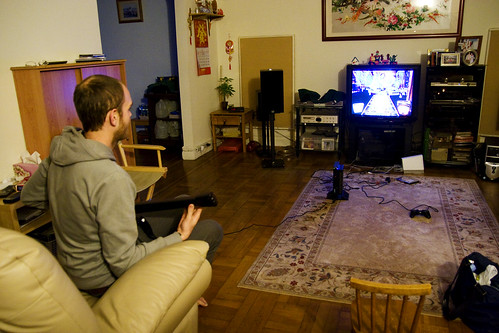 A Guitar Hero Is You.

And then we went to Amy's house just a few blocks away and played Guitar Hero. As a first time GH player, I almost hate to admit that pressing a bunch of buttons on the neck of a toy guitar is more fun that I predicted. Dammitthey'vesuckedmein. 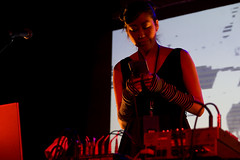 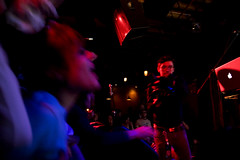 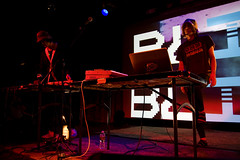 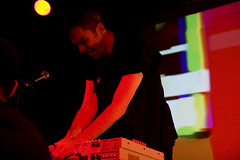 That night Amy and I went to the Blip Festival to bask in blippy goodness (that is, music that harnesses the blip-tastic, 8-bit power of video game consoles/computers from decades past). What did I learn? Blip music fans really like moshing and smashing into people. Repeatedly. (But they tend to be polite about it, apologizing after careening into your spine.) I felt a bit out of place as a sway-er, not a "gonna jab you in the ribs"-er. The highlights for me were Bubblyfish and Nullsleep, our favorite durian hater.

Bubblyfish seemed to be the only female performer during the festival. If Amy or I ever figure out how to use the copies of Little Sound DJ we bought, we might be able to increase the XX representation. Alas, I need to get a Gameboy first (currently bidding on one on eBay; wish me luck).

That diner is sooo cute! There are ones that look like that in Japan, land of adopted charm.
Chickpeas and pickles and coleslaw, oh my! Aren't chickpeas a bit unusual? I love them, but I've never seen them served in all their solitary glory.

Ooh, I'm intrigued by the blippy music; I listen to EBM which is more beepy than blippy, but some artists venture into that territory too. EBM dancers tend to be less intrusive though, just occupying their own cubic volume of space and waving their hands and/or glowsticks within that area.

I love diner food! I especially miss diners where they have super greasy burgers full of awesome flavor. (You know, the kind of burger that's fried on a pan that had just been used to fry bacon and you fry the patty in that bacon goodness?)

Hmm, interesting that the diner brought out that little silver thingy full of foods...

But, the sandwiches look yummy:)

"I wouldn't have minded more butter on the bread, but I could say the same about most sandwiches, or anything involving butter."

...or something lacking butter altogether?

I like that they serve complimentary chickpeas, coleslaw, and pickles. Not that I've ever seen it happen before in any diner I went to, but it does sound better than bread. Or nothing.

SuperChomp: I have no idea if the chickpeas are unusual, but they do seem to make less sense than the pickles and cole slaw...hm..um.

I haven't listened to EBM before...innteresting. The electronic music I listen to tends to not involve glowsticks. :)

FN: Haha, thanks for the clear rundown.

Mahar: I was tempted to get a burger but was too afraid of disappointment. So GRILLED CHEESE, it was.

Kate: I think I'd lean more towards sandwiches than burgers as a safe food. When burgers are dry and meh, I feel much sadness.

Eric: That might work sometimes, perhaps. ...Okay, maybe most of the time.

Christina: Oh god, SO MUCH BETTER THAN NOTHING. I need nibles asap.

I usually see the trio with pickled beets as the third party, not chickpeas. But I haven't received that trio at a diner in a long time; recession or going at the wrong time, I suppose.
Ugh, you were in Bay Ridge and you didn't go to Roll-n-Roaster. Shame. ;P

I have never seen boiled chickpeas on the table at any restaurant - but I love the idea...because I love chickpeas! And pickles! But not coleslaw.

Pickles and coleslaw, yes; chickpeas, odd. I love diners, though. They closed down my absolute favorite in the neighborhood because of health code violations, apparently. o.O Oops! Still the one a whole block down is pretty fantastic. As is the one three blocks from my house. Basically, I love diners. Grilled cheese with bacon + chicken fingers please!

With chickpeas, coleslaw and pickles, I wouldn't need to order food.

And if you like GH, wait 'til you try Rock Band - you get to play drums! Or whatever you want, really. Made my friend's six-month bed rest OK.

My sister "candy blogger" sera knows you and a friend of mine in bayridge was looking for a roomate. It'd be you and him and the rent would be 550.

If you're still in a bind I could ask if it's still available.

hooray diners! as a native new jerseyan, i honestly have trouble even contemplating a dinerless world. it's just such a given here!

and congrats on joining the guitar hero obsession. i fought it for a long time, and refused to sink to the level of my male video-game obsessed counterparts, but it is rather addicting once you get the hang of it....

(and congrats on finding a place!)

Guitar Hero!!! Oh man, that game could own your life if you aren't careful... what a great game

Yvo: Roll and Roaster..I heard ...interesting things about that place, heh. Was never interested in trying it but I'll keep it in mind!

Su-Lin: I hated coleslaw growing up, but I like it now! I have no idea why.

Kathryn: OMG I LOVE CHICKEN FINGERS, I should've gotten those!

piccola: I heard Rock Band was quite addictive. Haven't come across it in the flesh yet, but someday..probably.

Kathy: SUNK, WE HAVE!! Ken probably felt sillier because he's good at playing real guitar, including many of the songs in the game. Which seemed harder in game format than real life. Haha.

Danny: I will stay away from it. I had the most fun trying to play a song on expert...I didn't make it, but up until the point where I failed it was like "AHH HFHDFHDIU SMASHIE BUTTONS." I go totally insane when I play video games.

I love diners because they're almost always good enough for those spontaneous cravings that can be fulfilled only by foodstuffs on those impossibly large menus.

I love this post. I wish it were a podcast. And if it were, I'd wish I knew how to use podcasts.

Julie: Yesss, that is why I like having diners! I rarely get those cravings, surprisingly. But if I do..I know where to go.

Oh god, if I made a podcast you'd have to hear my annoying voice. DO NOT WANT!

I is t3h suckz0rz at Guitar Hero, it's embarassing D: I can't play videogames for shit.

The blippy music is very cute! But not my thing): The most electro I've gone is... uh, Owl City. They're (or he, it's a one-man band) awesome!