A life without tonkatsu (or pork katsu) is not worth living.

..Okay, that's a little extreme. I guess it's still worth living; it just won't be as awesome as one with katsu.

Out of all the different kinds of pounded, breaded, and deep fried pork that I've eaten in my life, the Japanese version is my favorite—it's the juiciest, most tender, and has the lightest, panko-based crust. When Kåre said that he had never eaten katsu before, my mission became clear: FEED KÅRE KATSU! 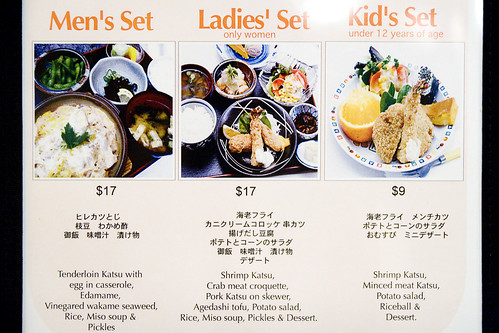 I took him to the katsu-centric Katsu-Hama in Midtown where we met up with Diana, Olivia, Amy, and Marcine. I liked that their menu featured sets for men, women, and children. Women can get the men's or ladies' set, but men can only get the men's (as it seems to say on the menu; Louanne says you men can order whatever your hearts desire!). I suppose it wouldn't be good for a menu to contribute to women's oppression. 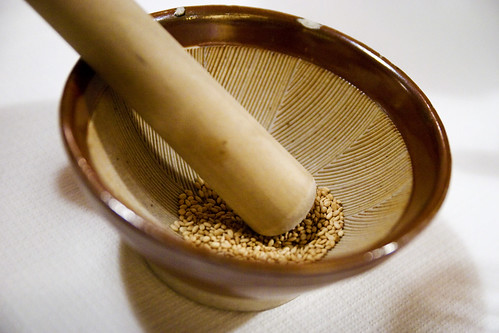 Each of us who ordered katsu was given a small mortar and pestle with toasted sesame seeds to act as the katsu sauce receptacle and add toasty sesame flavor. Every table had its own tub of katsu sauce with a teeny ladle so you could drown your fried meat in as much sauce as possible. I don't know how to describe katsu sauce besides that it tastes like katsu sauce, but it's apparently based on ketchup and Worcestershire sauce and a bunch of other flavorings, so if you can imagine that...there you go. In other words, just go out and eat it. I am no help. 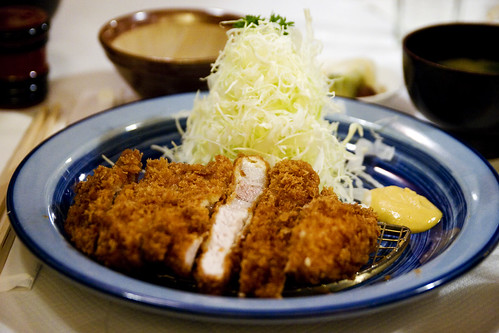 I was excited for my kurobuta katsu (Berkshire pork loin) in all its golden and fat-oozing glory, besides that it was possibly the priciest katsu I had ever eaten for $18 a pop. 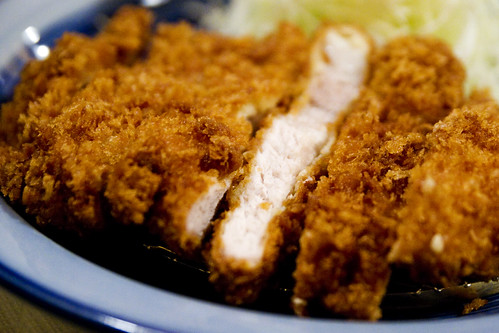 But it failed. Or for $18, it failed. Sometimes fat is the most beautiful thing, when its like melty and buttery smooth; other times it's gristle-like and makes me feel nauseous. A few bits of fat in the katsu leaned towards the nauseating, "can't really chew this" end—I left them behind. And while I liked how crispy the crust was, I found it a bit too greasy and I didn't like how easily it fell off the meat. How could I be so critical of one of my most favorite foods? :( I tend to like all katsu; if something fudges with my katsu love, you know something's wrong. 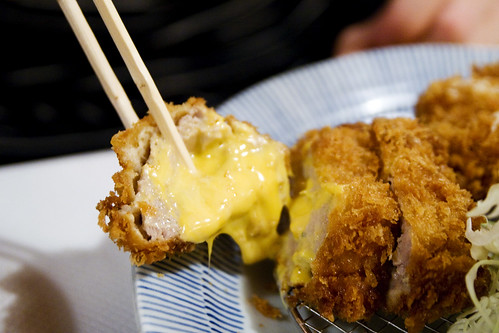 IT IS FULL OF DAIRY.

I would've been better off getting Kåre's cheese-filled katsu with its center of exploding, molten, yellow cheese substance. Never before had thought of combining cheese and katsu, as cheese doesn't generally appear in my favorite Japanese foods. But why not? I grew up eating cheese-laden veal and chicken parmigiana. That's...um...kind of similar, in the fried cutlet family. I didn't try the cheesy katsu, but Kåre approved.

Although I wasn't very happy with my kurobuta katsu, I wouldn't totally write off Katsu-Hama. Their lunch specials are supposed to be good for the price. I'm perfectly happy getting katsu from Go Go Curry for less than $10 though. 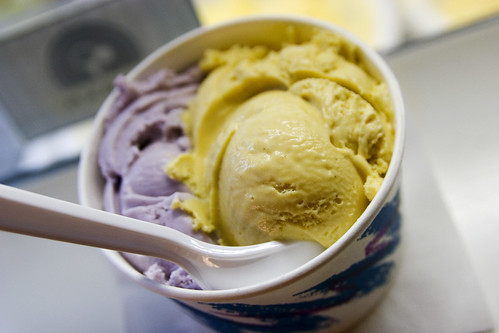 And then there was dairy.

We fled Midtown for dessert, down to the safe confines of Sundaes and Cones, my favorite conveniently located ice cream shop. Due to Marcine's suggestion, I had to get the seasonal pumpkin flavor. Kåre and I shared a two scoop cup, the other flavor being taro. Pumpkin was satisfyingly creamy and pumpkin spice-y; taro had that unique sweet and starchy flavor as always. 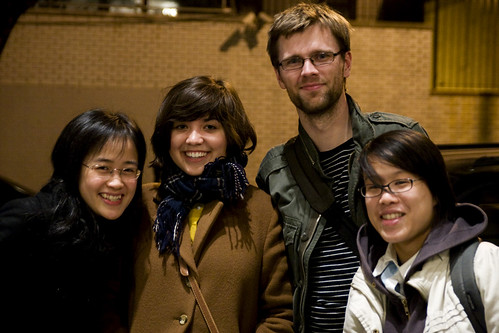 Can you spot the Scandinavian? Can you?

Here's a normal photo I took of Diana, Marcine, Kåre, and Amy. 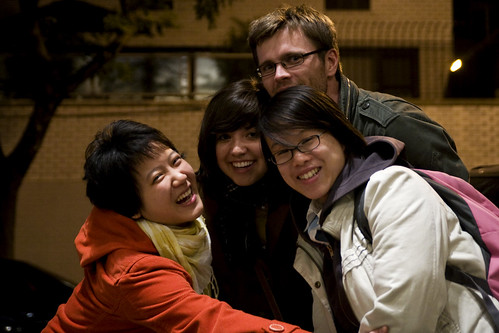 And one Diana took of me trying to hug everyone. They promptly recoiled. 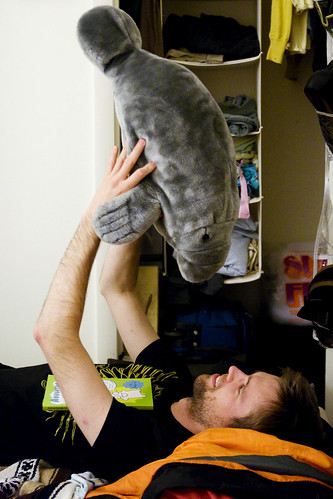 A man and his manatee.

To finish off the week of Kåre (which ended over three weeks ago, but hey, who's counting), here's the last photo I took of him playing with (medium-sized) Manatee. Aw.

AND THAT ENDS KÅRE WEEK 2008!!! He is dearly missed. Kåre is doing fine back in Bergen, far, far away from New York City. :( My life went back to being boring and his went back to being Norwegian—and by that, I mean Utopian. Hopefully the next time I see him it'll be on Norwegian soil.

lol, guys can order the ladies' set if they ask. the waiter kinda gave us a shrug when i asked and ordered for my guy friend. :P it had everything he wanted to eat!

Louanne: Hehe, thanks for the info! I shall update my post accordingly. I find it funny that the menu says "only women." Shouldn't really matter, eh? I went to another Japanese restaurant that had a special ladies' set and only the women in my group got it, but I don't think the guy wanted it anyway. (Or maybe he would've felt funny ordering it!)

LOL a restaurant in Montmartre did something
similar with salads. 'La salade pour les garcons' had meat in it and 'La salade pour les filles' didn't! The slightly dainty ingredients of the 'girl' salad would make it a little embarrassing for guys to order it for themselves... ;)

Mmmm Taro ice cream. Yum! Sorta praliné like if you ask me (you weren't).

By the look of those last few pics Kare is one lucky guy. Or maybe his ears were bleeding after being with 3 women, who knows.

I hope kare realize that he might have the best tour guide out there! i am so impressed with all the places you went too!:)

Would it be terribly inappropriate of me to point out that Kåre is kind of gorgeous? Although perhaps that's just my fondness for tall guys in glasses coming out. I'll bet he has a great accents as well. [/embarrassing confessional]

Jane: A REAL man would order whatever he wants, even if it's A DAINTY SALAD...

G: HAHA, there was no visible bleeding. Maybe it was internal... oh noes.

Ulla: Aw, thanks! I like playing tour guide as long as my guest doesn't mind me DRAGGING THEM ANYWHERE I WANT. I take suggestions, of course, if you wanna go anywheeeere.

Kathryn: That's totally appropriate. ;D Kåre probably doesn't hear that enough, even though everyone says it behind his back. And yes, he has a great British-Weegie accent going on. Hehehehehe.

Ooo that looks very cheese-licious. Hmm, kinda makes you think about making chicken or veal parmesan with the cheese stuffed inside...rather than on the top...actually...put some cheese on the top too. Hmm...hahaha.

Aww Kare is quite handsome:) You can probably tell him he has a fan base:D

Now I want katsu filled with cheese. I've never said that before in my life.

On an unrelated note, I tried to abort my first comment a couple of beats after sending it so that I could amend it, but when I refreshed this page, it had already posted. I wonder if that's helpful in your ongoing quest to figure out the slow comment-handling. Dunno. =\

Kate: We could form a Kåre fan club!

I tend to like cheese on top of things, not inside. Kind of. No wait, I like grilled cheese sandwiches..hm.

Julie: There's a first time for everything. This is..a special moment.

I think the solution to my ongoing quest to figure out the slow comment thing is to switch hosts. Eegad..I'm lazy..I hate switching hosts, but maybe I'll do it in the next year.

Y to the Kare fan club, he is so cute.

I've brought friends around before for food tours but never on such a grand gorgeous exploding scale.

I admire you, woman.

Sydney: You can go on EPIC FOOD TOURS in Singapore! I'm so jealous. :)

I'd totally kill to have a katsu restaurant nearby (well, perhaps not kill. Unless it was a pig perhaps. Hmm.) $18 does seem pricey though, especially for a disappointment :(
The taro ice cream looks awesome. It's like, the king of root vegetables! or something like that. I'd like to try to the pumpkin too, quite rare to find such a flavour here in Britlands.