Anthony Bourdain's back and David Chang

"Hey, Olivia!" I said as she rounded the corner of Momofuku Ssam Bar.

"ANTHONY BOURDAIN. IN THERE." Her eyes were aglow with the fiery passion that is, "I Am In Love with Anthony Bourdain."

"Yeah, David Chang's in there too, looks like they're taping some—"

"ANTHONY BOURDAIN! OH MY GOD." Her eyes went up one notch crazier to, "I Am Going to Kidnap Anthony Bourdain."

I mean, in her mind she was probably foaming at the mouth. In real life, she appeared to be mentally stable. But then again, don't we all? Don't we all? 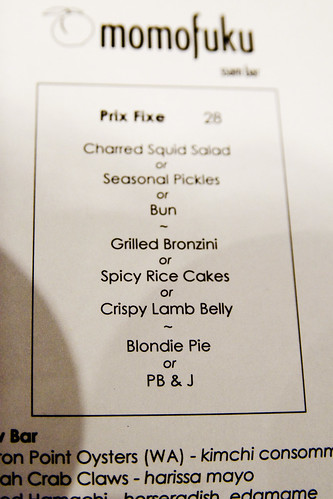 Although I consider Ssam Bar a splurge meal, their semi-new prix fixe menu of three courses for $28 is a great deal that'll leave you stuffed for half the price of dinner. Kåre and I each ordered from the prix fixe menu and got different items to maximizing our diversity. You'd be dumb not to. Since Olivia is a newly christened celiac (insert sad face), she just ordered ham and brussels sprouts and shared whatever non-gluten-tainted dishes we had ordered. 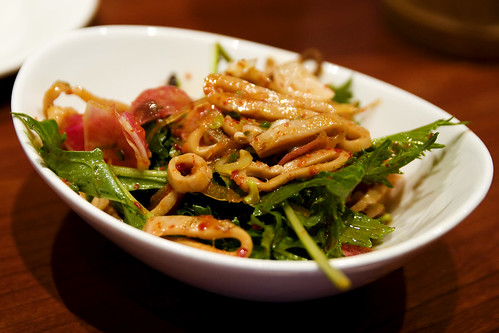 For my appetizer, I chose the charred squid salad. I never order squid unless I know it'll be awesome. And I knew. Yes. Soft, slightly chewy rings-o-squid dressed in some sweet-spicy-tart dressing with salady things that I can't remember because all I really cared about was the squid. Altogether, it was a great balance of squid and vegetable matter. To answer the grand question, "Would I eat a bucket of this?" the answer is, "Yes." 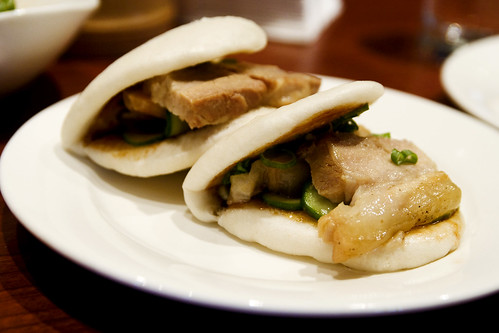 Kåre started with the pork buns, one of David Chang's most beloved dishes. While each bite is mostly a blast of porcine fat, every component is crucial to the magical "pork bun" experience—pillowy bun smeared with sweet hoisin sauce, juicy pork belly chunks glistening with 50% fat, crisp, paper-thin slices of cucumber, and a sprinkling of chopped scallions. You could add Sriracha for a kick of spiciness, but otherwise I can't imagine why you'd change anything. Kåre said this was his favorite dish of the meal. 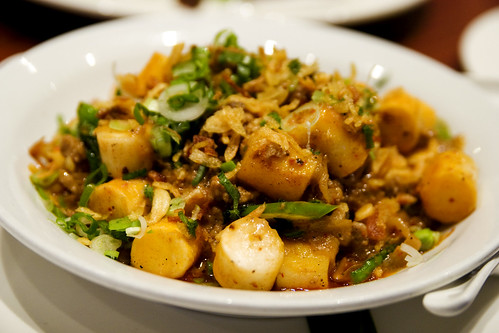 Spicy rice cakes with pork sausage, crispy shallots, and other vegetable-like things, is one of my favorite dishes ever. Most glutinous rice cakes I've had are just chewy and soft all throughout, but these are also crispy on the outside. Kåre had never eaten these kinds of rice cakes before; he approved. 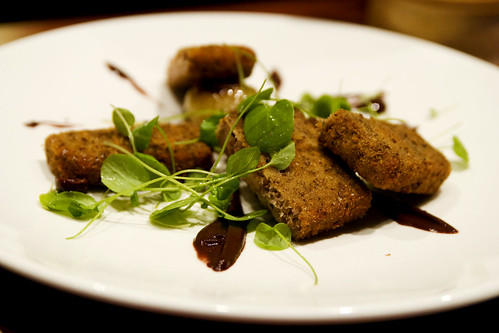 Each bite of crisp lamb belly oozed with fat, mixed with some lamb and lamb juice. It was like the deep-fried meat equivalent of biting into a sweet, ripe, juicy apple, if that makes any sense. Maybe not. Whether or not you know what I'm talking about, you must order this. And you must like it. Only failures dislike crunchy, breaded, deep-fried slabs-o-fat. 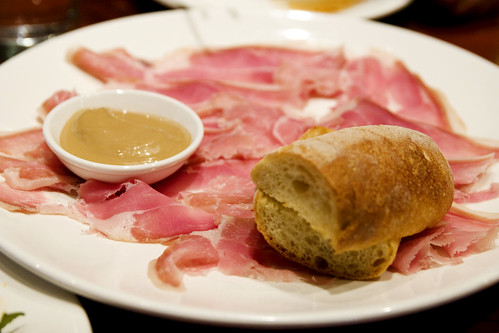 My favorite part of the Benton's smoky mountain country ham with red-eye gravy (coffee-flavored) and Sullivan Street Bakery bread is probably the bread, not because I dislike ham (not that I'd order it either) but because I really like chewy, crusty Sullivan Street Bakery bread. The ham is nice, considering that I'm not in love with the ham family. Soft and...porky...and...um...stuff. I'm not a ham connoisseur. 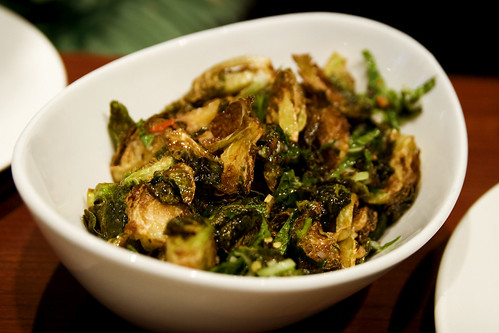 Behold my favorite form of brussels sprouts: fried. Satur farm's fried brussels sprouts with mint, scallions, and fish sauce vinaigrette isn't on the prix fixe menu, but you should order it anyway. Tiny wedges of crispy cruciferous layers await you. 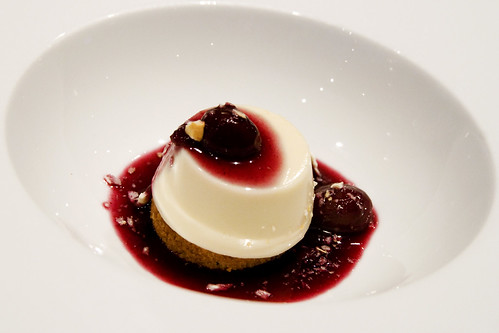 The desserts are interesting and are a nice way to end the meal, but I have yet to love any Ssam Bar sweet. What I mostly remember about the PB & J—panna cotta atop salty. crunchy peanut buttery thing with concord grape jelly—is the panna cotta. The salty panna cotta. I suppose the saltiness is less apparent when you eat it with everything else. 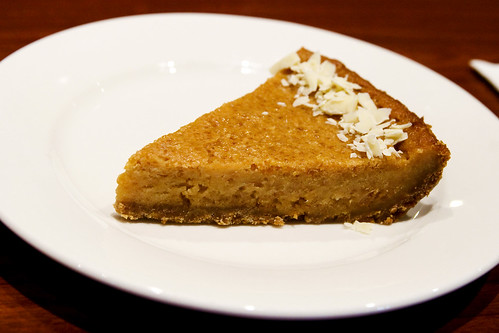 I'm a bigger fan of the cashew blondie pie, with white chocolate shavings, although like the last time I ate it, I still thought it was too sweet. It also tasted heavier than last time (Kåre and I couldn't finish it), maybe because I was eating it during lunch instead of dinner. 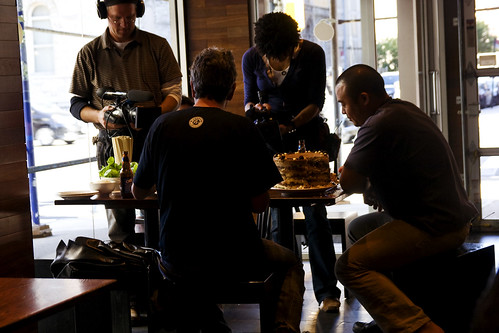 During the meal we periodically looked towards the front table to see what was going on in Bourdain-Chang world. At some point they brought out a huge-ass cake. There it is. 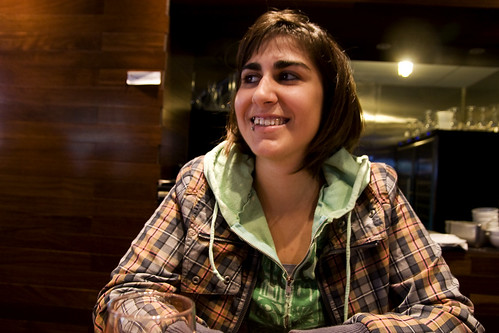 As Anthony walked by our table after taking photos with the rest of the Momofuku Ssam Bar crew, Olivia declared her love for him said she was a fan and shook his hand. Then she blushed and glowed with the power of a thousand rainbow unicorns who just smoked pot.

How often do I run into famous food celebrities in the city? Uh, like never. Kåre got pretty lucky for his first "real" meal in the city. Or maybe I got lucky by eating with Kåre. Hmm! 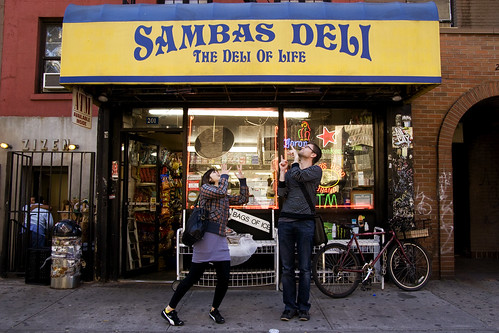 Next door to Ssam Bar is Sambas Deli, THE DELI OF LIFE. OF LIFE. It's not a lofty claim; it's the truth. Olivia and Kåre basked in its unearthly, conveniently located powers. 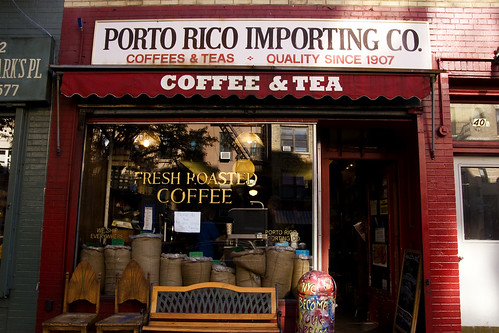 We also stopped by Porto Rico so Kåre could buy his favorite thing in the world: COFFEE BEANS. 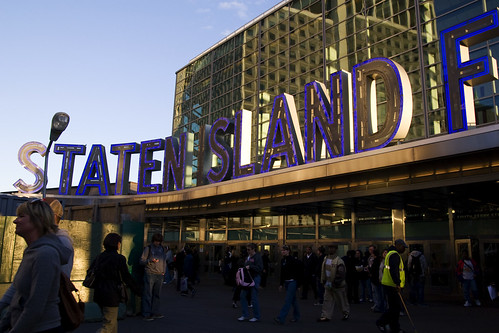 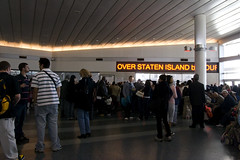 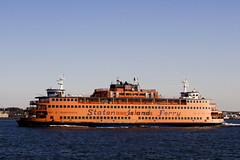 And then Kåre and I went to Staten Island. Because when you put yourself in Robyn's hands, she takes care of you—by bringing you to the most suburban borough in New York City. 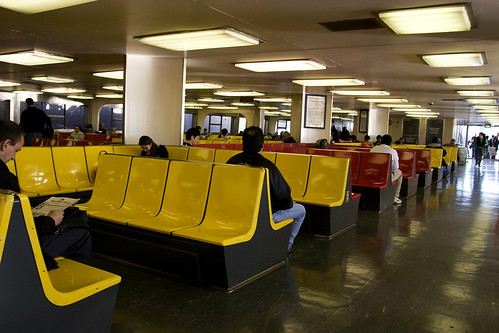 Of course, the real point of going to Staten Island was to ride the free ferry. While I thought it was my first time riding the ferry, as soon as I stepped into the ferry memories from my childhood came flooding back. "I have definitely been here before. ...This is weird." The snack area and the windows tipped me off. It's strange to discover what memories are wedged in the back of your mind, stuck between other useless memories. 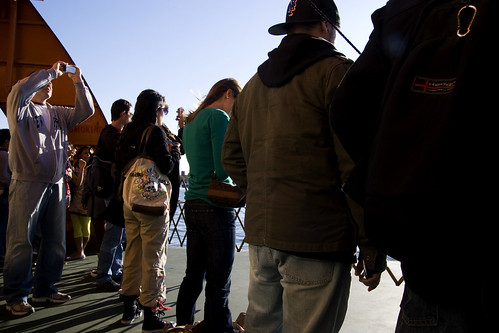 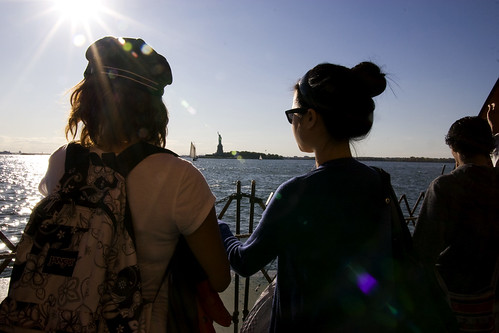 And to catch a glimpse of the Statue of Liberty. 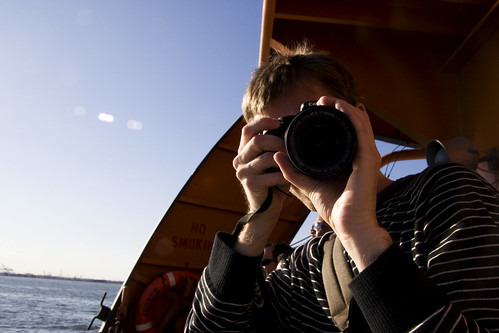 And to take photos of the other person taking photos.

And to breathe in the non-city air.

When we got to Staten Island, we didn't immediately get back onto a returning ferry; we briefly roamed. You can't really roam for much longer than that. The brief roam, plus more, are coming up in the next entry.

Related:
Kåre Week, Day 1: Falafels at Taim
I Momofuku Ssam Bar-ed, And All Was Good With the World

David Chang and Anthony Bourdain! Can you send Kåre to Singapore please. I think he is lucky.

Loved how nonchalant you were too when you met them. I don't get star-stuck with normal celebrities, but I do get it with foodie celebrities. Once I met Giada and I was an incoherent mess. But that could also be due to the fact that I love her (sorry Todd.)

By the way those video cameras are pointed, I think you're going to be on TV Robyn!

Oh Robyn, you had a brush with AB! He's currently filming in the Philippines for NR season 6, and friends of mine and I took off to where we thought he'd be, only to get there too early. We do know someone who will host him on his trip. We were definitely fangirls at our best!

I like the description of the b/sprounts vinaigrette, very Vietnamese with herbs and fish sauce. I may attempt to do one up since I love b/sprouts!

i've always wanted to ride the staten island ferry. you're living out my dreams!! and you meet tony bourdain! he hates vegetarians. i'm a vegetarian. i should hate him. i don't. i love him. i'm going to go hide in a corner now.

my life dream is to meet anthony bourdain.

sooo happy AB is back! I was saying only the other day we needed some no NR or ACT!! good spot!

I probably would have just stared at him the whole time...a little bit of drool leaking...haha

David: I'm sure Kåre would love to go to Singapore!

I was kinda like "whoa!" when I saw em, but there are very few famous people that would make me hyperventilate or something. A few musicians, maybe. Not that I'd approach anyone cos I'd be afraid of bothering them.

Mila: I heard he finally made it over to the Philippines, yay! I hope your stalking pays off. ;)

I love brussels sprouts too, but have never cooked em! I suck.

Betsy: The ferry is fun, mostly because it's FREEE! :D A nice getaway from the city as well. AND IT'S FREEE!!

You can form a club of vegetarians who love AB? ;) Or does that already exist?

Sheena: Thanks for reading!

Leigh: I feel bad saying that I haven't watched much of Anthony's shows, although the ones I did see were awesome. I should..uh..watch the rest..

Kåre: I've been saying "nice" more lately. Now I can channel the power of KÅRE ALL THE TIME.

Mm pork bun. You should get Morten to make you some! Here's a recipe.

Kate: You and Olivia could be BEST FRIENDS.

i also enjoyed the lil'ferry ride, esp. my dad cause it was free. ha!

I have not posted in comments for a span but I will today. What in the name of ZIZEN is happening in that alley in the "Deli of Life" photo? In the future please give a NSFW heads up. LOL >^..^

My favorite line: "Then she blushed and glowed with the power of a thousand rainbow unicorns who just smoked pot." It will bring me happiness throughout the entire day. The food, of course, looked tasty! And yeah, free ferry rides are fun in my book, too!

Ahhh! Also, I meant to express my sympathies for Olivia's celiac diagnosis. No, it's not the end of the world, but it makes eating a lot rougher, especially when eating out. I hope she's not having a hard time finding food that will satiate her body and her spirit and all that!

I want to try that spicy rice cakes, it sounds so good and I love glutinous rice!

Ugh, I'm never going to get that I-Just-Touched-Anthony-Bourdain's-Flesh glow again! There's only one way to get it back...and that's by stealing unicorns.
and cannabis.
loads of cannabis.

As I write this, they're making a Manatee cake on Ace of Cakes. Yep, I thought of this blog.

maomau: It takes with fat ooze.

Jane: I hope you dreamt of pork buns! Ehhh?

Julie: I'm glad I brought you happies. :) And I think Olivia is doing ok. Just no more croissants or pastries or breads or..um..yeah..

Mitzy: I'm sure you'd love it!

Olivia: We'll get it for you. Don't worry.

Miss Tiffie: Sorry about the comment problem; the html got messed up because of the less than sign. You'd have to write it in html code to come up, like <.

I hope you went to Enoteca Maria's (is that the name? I'm too lazy to look it up now) on SI :)

Yvo: Oh no, I didn't know about this place! Is it awesome? Menu looks nice. I guess if I ever take the ferry again I have a place to eat now.

I'm in California now, but I still dream about Momofuku pork buns. AHHH.

Teresa: That's understandable. Few other buns belong in your dreams.

after reading this i remembered one of the few things i miss about cable, and promptly texted my boyfriend: "you know what would be really dorky bust awesome? if we downloaded some No Reservations."

I am so jealous. Seriously. Anthony Bourdain! Tony! OMG!!!! I would have died. He is the one person I would love to meet - or even see in person...or just bask in his awesome presence from afar. Geeze. Some people have all the luck! Talk a bout being in the right place at the right time. ;)