Many things have happened lately. For example, the earth moved around the sun for a bit, and I ate a lot of stuff. But first, there's this. 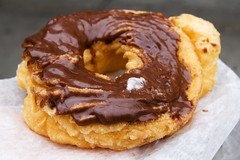 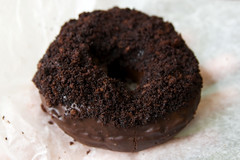 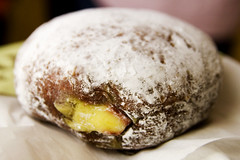 A few weeks ago I went on a doughnut hunt with Kathy for a Serious Eats New York assignment. The fruits of our labors (labors that exploited our insensitivities to sugar overloads) are now available for your reading pleasure: A Guide to the Best Doughnuts in New York. You can view my whole photoset for outtakes and doughnuts that sucked so hard that they didn't make the final cut.

I didn't eat every doughnut that Kathy did; we did an 11-location hunt in one day while she ate the bombolonis on other occasions. But 11 is still a lot. And despite that we had planned our route to be so excessive, we still ate at Shopsin's for lunch (which was unplanned) Best and worst idea ever. ...No, it's the best.

So I hope you enjoy that. Less than halfway through out doughnut day—which lasted from 8:30 to about 4:00—we were already sick of doughnuts. My pick for best doughnuts goes to Doughnut Plant, but only the cake doughnuts, not the yeast.

And on to the second part of this entry, which isn't a "real" entry but my explanation for why I'm not writing a "real" entry: Why the hell am I so busy? 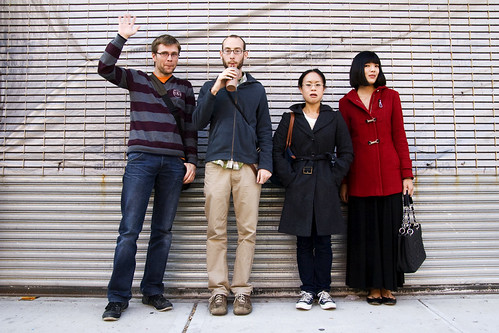 Because Kåre is here! YES!!! Kåre from Norway!!!, previously seen in Norway and Bologna. He arrived last Thursday and is staying until Friday. It's his first time in New York City—hell, his first time out of Europe—so we've been doing a lot, eating a lot, walking a lot, and meeting a lot of my friends. And eating a lot. As I attempt to share the best of what American culture has to offer. Check out this photo: 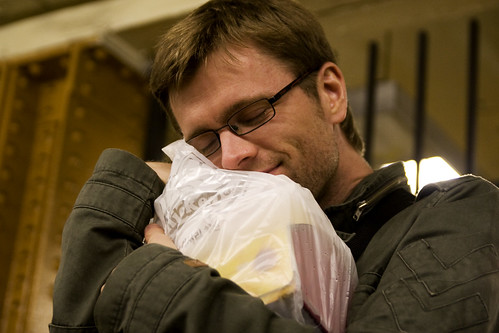 That's Kåre hugging a bag of chicken from BBQ Chicken (on St. Mark's Place) while we waited for the subway at the 1st Avenue L station. The real American experience!!!?!@#!@$ Uh.

Also, as you can see from the earlier photo, Alex was also here over the weekend. When Alex is here, it's all Alex, all the time. Which means it's FUN HAPPINESS PARTY all the time.

So basically, I've had almost no time to do anything else besides work, sleep, and potty. Yeah, you needed to know all that. It's rare I have visitors from out of the country, so I hope you'll excuse my absence. Besides, I'm still blogging on Serious Eats...kind of. Actually, I've been busy there too with non-blogging things. But I did just write this post about dim sum I ate at 88 Palace just this past Sunday, SO YOU SHOULD READ THAT, OK?! NO PRESSURE...[glares at you for 10 minutes].

No, not a best donut list!! Arggggg, now I have to go eat every one of them. Keep up the good work!!

I've been wondering lately if you could, say, freeze a Boston Creme donut and eat it like an ice cream sandwich.

Amy, KFC can be found all over the world tho, you need to go like Popeyes... hahaha us Americans eat Popeyes and White Castle... and Grey's Papaya :D Hahahaha...

What's your favorite kind of donut?

FN: BWAHAHA I'm glad you feel like you have to eat em all. We've done our job right!

Amy: I was being semi-sarcastic, but maybe I should stick in some emoticons/random punctuation marks to convey that...(scratches head)

Miss Tiffie: My fave kind..prolly a plain glazed. Or plainer. I couldn't even decide between cake and yeast, although cake seem less likely to suck.

Hey Robyn, just wanted to say hi here, b/c I feel like its been foreva! Hello, hi.

When are you going to tell us about the FAIL donuts? Who failed?

Yummy donuts!! -=D I still want to try doughnut plant but it seems so out of the way for me...-=(

Yeah. I read you got to eat crullers. *sniff* Out here, the only "crullers" I can find are cake donuts in cruller skin. =(

But hooray for happy friend time complete with eating!

Whoa did Kathy get a new haircut? Looking so chic.

Kathryn: I think we'll write another entry about that. We hadn't thought about it though..eheh..eheh..hm..

HAPPY FRIEND TIME IS THE BEST!

Mike: Yup, she got the new cut on Saturday! It's niiice.

They made this huge deal about their chicken

being fried in extra-virgin olive oil for healthy

dietary reasons when I was living in Korea and

I kinda thought they were crazy for some reason.

I still prefer KFC though... :D

3 down, 9 to go. Already had done Trois Pommes (my favorite place on earth) and Donut Plant. Last night, swung by Koryodang. Great place to sit and people-watch. Had a sweet rice twist - very good and as you say, not overly sweet, which I liked.

For reals! I'd buy a cruller, usually at a grocery store, and expect a nice, airy, light and crispy bite, but I'd get a mouthful of cake. Like they put the cake batter in the cruller machine so it looked like a cruller. It's such a horrible trick!! =(

Cannot wait to read your entry...you really seem to have a fun life, Ms. Robin! Your blog is really the NYC food bible.

Did you know Bostonians are (or were) donut crazy? And that Dunkin' Donuts came out of Boston? And that Isabelle Gardiner (of the Gardiner Museum) once served donuts and champagne at a lawn party? And that in the early '90s a bunch of MIT students put a campus police car on top of the Great Dome at MIT with a dummy policeman behind the wheel and a box of Dunkin' Donuts on the front seat?

4 down, 8 to go. Went to Balthazar and ordered by sight (as in, "gimme that one") and was surprised to find it was "banana-pecan." It was delicious but I didn't taste any banana at all. Still liked it a lot.

I'm not going to read your post. I mean you only glared for a measly 10 minutes!! Now 12 minutes... that would have been a different story.

Jane: I'll admit I haven't had KFC in a gazilloin years, but BBQ is SOOO GOOD MAN. Not that it's healthy or anything. ;)

FN: Damn, you're doing well! I haven't actually had the rice twist (that was Kathy's doing), but I should try it next chance I get. And I was disappointed about the lack of banana in the banana pecan doughnut. :(

To answer your questions, kinda, yes, no, no! I love hearing about those MIT pranks. Crazy kidz. I wonder how different my life would be if I were actually smart enough to go to MIT...and..I went there.

EB: But my glare is so powerful that 10 minutes of my glaring in normal human time actually transports you to another dimension where it feels like an hour. And give you a burning sensation.

i'm with kathryn - tell me what donuts to stay away from, cuz i already kinda know where to go for the good ones, but i don't want to accidenally stumble on a clunker while rushing to satisfy a sudden, intense donut craving. which believe me, happens more than you would think (or maybe not).

the bestest times 10 donuts in the world, in my opinion, is mister donut in japan. so if you ever go to japan, you must try it. everything on the menu. they even have porridge for in-between-donut breaks, i kid you not.

Hmmm...I think I am gonna go find a donut now:)

Michelle: Kathy and I will try to write an entry about the faildonuts this week for Serious Eats!

ila: I wish I could go to japan.. :( Mister Donuts is def the cutest donut shop, eh?

Kate: Did you get a donut?

5 down, 7 to go. This morning as I was getting ready for work I looked at my gut and I cursed you! Not enough of a curse not to go to Cafe Falai for Bomboloni, however. Had two: the chocolate and chantilly cream. Man those were good!