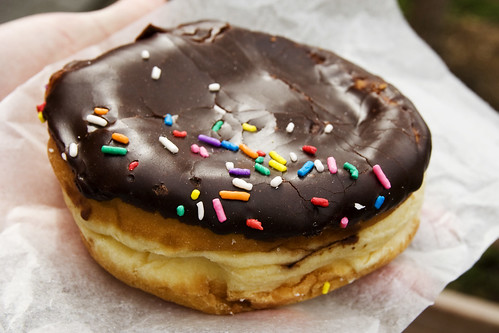 After the Night of the Manatee, Alex and I met up with Kathy at Alpha Donuts to help her with her epic Donut Hunt of 2008. The donut hunt is for an upcoming post on Serious Eats: New York, so I won't reveal too much besides that we're pretty sick of donuts and New York City is not a good donut town. Alpha Donuts was alright—nice if you live nearby, but not worth going out of your way for. Imagine that I'm doing that see-saw motion with my hand, the one that says, "Ehh, you know." (At least, that's what my hand says. It speaks to me. It's perfectly normal.)

Unsurprisingly, my stomach hurt after that. I think it wanted "real food," or a vitamin, or salt, or something. 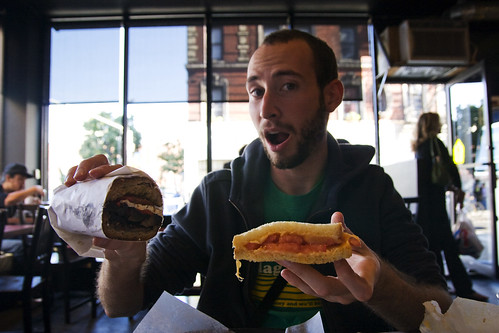 I brought Alex to Tiny's Giant Sandwich Shop for a cheap, vegetarian-friendly lunch. Unfortunately, my faith in the Pesto-rific, sautéed portobello mushrooms, roasted red peppers, fresh mozzarella, and tomato with pesto on a 7-grain baguette, was misplaced. What tasted amazingly good the first time I ate it tasted disappointingly boring the second. Not bad; just underwhelming. For a sandwich named after pesto, it didn't have much of it. On the upside, there were plenty of mushrooms and other fillings. I thought maybe the bread was different since this time it overpowered the flavors of the fillings with its nutty wheatiness, but after comparing photos it looks like the same 7-grain baguette from before. Either the flavor was off or my taste buds were off. 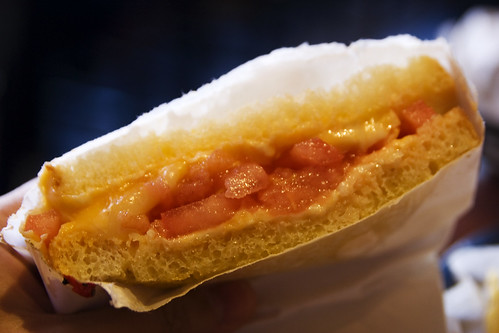 Grilled cheese, though, I would recommend—it was good as always. An oozy triple whammy of cheddar, provolone, and mozzarella between two butter-laden slices of bread sandwich a heart of tomato, making it one of the few times I endorse the inclusion of raw tomato in a sandwich. I usually dislike raw tomatoes, sometimes to the point of having to remove their slippery remains from whatever I'm eating.

After lunch, we went to Uniqlo, Alex's preferred clothing shop in New York City (as is mine). After much debating between colors and styles, he finally settled on a simple blue cardigan and a white collared shirt. Or maybe he got a t-shirt. Whatever he got, it looked hot. And that's all that matters. 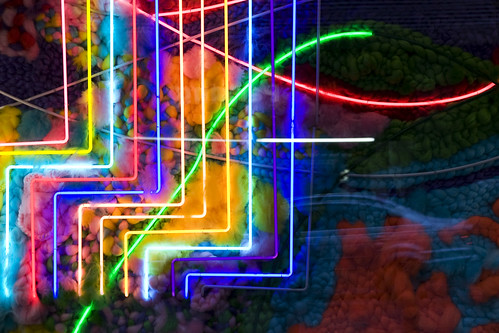 We passed The Modern in a failed attempt to visit the MoMA (we got there less than half an hour before closing). I've always been interested in eating at The Modern, but not to the point where I felt like coughing up the dough for it. The display of flashing angular neon lights over a yarn "painting" by the door was especially cool, even if I had no idea what it was supposed to represent. I'm guessing "neon lights" and "yarn." 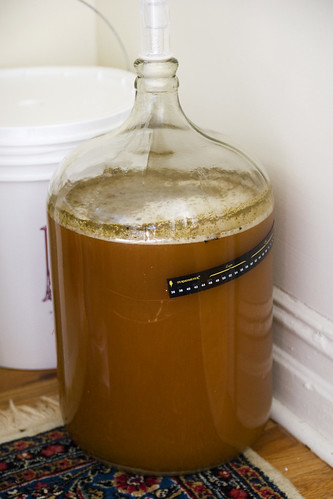 Tristan and his friends made vegetable soup that night for dinner. We all stayed in the apartment that evening to get ready for our house party, the point of the party being to drink all of Tristan's homemade beer. I stupidly forgot to take a photo of our fridge full of beer—above is a photo of the beer during the fermenting process—but I got a photo of THE ICE CREAM TABLE. 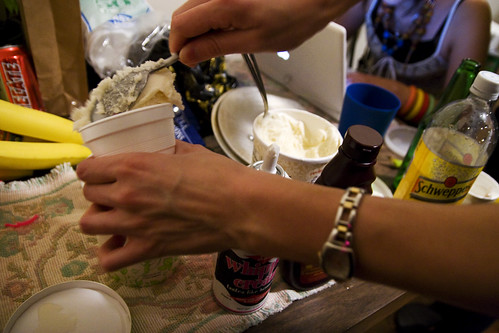 It's a rather anticlimactic table, but for my first try, it could've been worse. I proposed the idea of making hot fudge sundaes as an alternative to drinking beer (me being the key non-drinker). While the initial response seemed nonexistent, as the party date got closer I found out that people actually wanted ice cream, thus giving me a good reason to buy all these ingredients aside from indulging in my own gluttony. I waited way too long at Trader Joe's to get that ice cream (two quarts each of dairy and soy, the soy possibly being better than the dairy), chocolate syrup, and whipped cream, and failed to think about how to display the ingredients in some sort of organized fashion. The final arrangement was haphazard, to put it nicely—there were cups (in their original plastic bag), there were spoons (also in their original plastic bag), and there were open pints of ice cream; I trusted that people could connect the dots between these visual cues and no Ikea-like diagrams would be needed. Preferably they would also eat all the ice cream so I wouldn't have any leftovers to worry about, but in the end only a little more than one quart of dairy and one quart of soy were eaten.

On the bright side, all of Tristan's beer was consumed. Unsurprisingly.

Some photos from the party, whittled down for your lack of boredom: 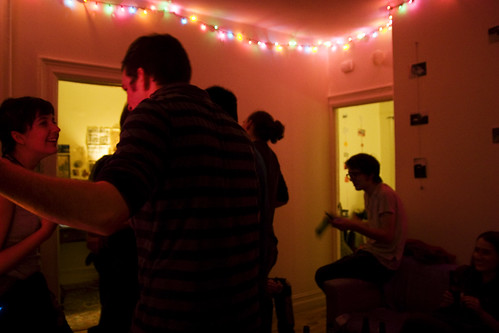 People in our living room. Tristan's room is through the left door, mine through the right. 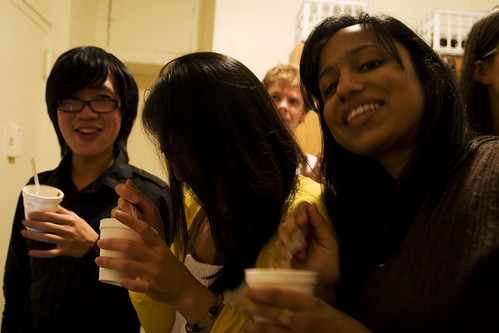 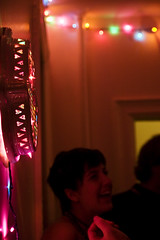 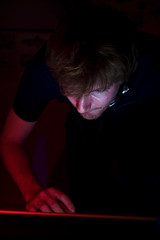 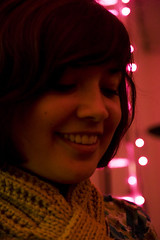 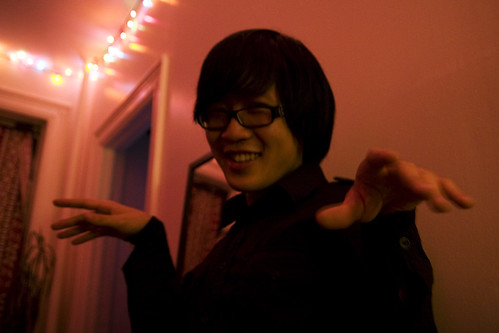 Drunk with manatee. What horrors he had seen that night...what horrors.

The party was a success because everyone who came was awesome, especially CJ, who came from New Jersey and showed up somewhat lost at 1:30 a.m. (man, I felt so bad for him). I didn't dance, but I watched semi-drunk Alex dance and sing Kylie Minogue, which is the definition of an A+ party. 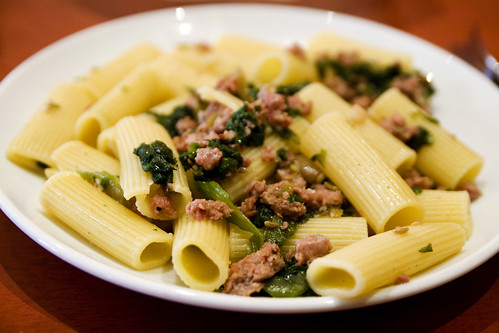 The next day after spending one and a half hours at the Metropolitan Museum of Art, Alex and I met up with his friend Thane at Otto for a quick lunch. So quick (because Alex had to catch a bus back to Philly) that, for the first time, I didn't order dessert. No. Dessert. No gelato of perfection to end the meal with. That's almost not a meal at Otto, but in the end I was satisfied because my plate of penne with sweet Italian sausage, garlic, and swiss chard was awesome. It's a simple dish, but it's those kinds of dishes that leave the greatest impressions on you when they're done right—when each component perfectly balances the other. Otto cooks their pastas to the point when they're a little hard in the middle (I'm not very knowledgeable about pasta, but I'd label that slightly before al dente). Apparently, this is my favorite level of done-ness in pasta, and it's been the same every time I've gone to Otto.

I'm always hesitant to get pasta at Otto because they cook it so al dente. It might be because I'm grew up eating Chinese/Japanese noodles, which are always cooked fully through.

There's that hard bit in the middle and my mouth is always going "ugggggh wtf". My chinese friends couldn't really get used to it either. I hope we're not fobs because of that.

And I think I'll hit up Otto next time I'm in New York!

If you are still looking for donuts, try the ones at Atlas on 2nd Avenue. They are delivered from Vegan Treats in Pennsylvania. Supposedly they are so good, they are delivered Tuesday night and gone by Wednesday.

Awww! Love the food but the manatee was the highlight of today - I'd say it drank too much as well by the looks of it :P

As for me I like jelly filled donuts because of the jelly and no I'm not a cop...

I cannot wait to read Kathy's report on Donut Hunt of 2008.

Otto is awesome, everything there is excellent but I love their pizza the most.

oooh yea i saw her doughnut photos... did y'all see any maple bacon donuts?

and the modern is decent for Restaurant Week (the only time i've been there) because they give you plenty of choices.

and the manatee is hilarious. haha

Mike: My mom likes soft noodles; I..do not. Heh. Growing up I didn't eat much Chinese noodles, but I loved udon, which is also..soft. Hm.

I LOVE THE UNCOOKED MIDDLE! OH GOD WHY?!

Su-Lin: And I'll be here, waiting for youuuu.

CM: Ah, I've been meaning to try Atlas! Thanks for reminding me.

Liam: Manatee is the highlight of LIFE ITSELF.

Corey: We went there! Only once though. I've been there twice and I quite like it. The shop itself is cute.

Mitzy: Donut hunt should be posted on Monday! I spent a chunk of my day putting in the photos at least, heh.

I LOVE THE GELATO THE MOST!

Donuts can be tough. I was a big fan of Dunkin' Donuts evil-for-your-health crullers before they stopped making them. I think Krispy Kremes are only good when they're super fresh and hot. I think my cholesterol went up just thinking about them. =(

I would've been all over the ice cream bar, for reals.

Yep, adding Peter Pan to my long list of places nearby to check out.

I'm seriously angry, though, that I can't find good apple cider donuts here. I was able to get them easily when I lived in New England, and all the farmers markets had them when I lived in DC, but here? Pfffft. And they're the only ones, to my mind, worth the inevitable stomach ache.

Ooh, I love slightly-undercooked pasta! My teeth enjoy the resistance. I really want to try Otto, but I am too much of a cheapskate.

I ate at Tiny's last weekend, though! I ordered their BLT but didn't end up being in a bacon mood. Now I wish I'd had the grilled cheese instead, but I was a little scared of the four cheeses threatening to crush me by strength in numbers.

Julie: If only you had been at my party. SO MUCH ICE CREAM 4 U!

Tanya: Oh my god, we had some terrible apple cider doughnuts from the greenmarket during our donut hunt, but I've also had pretty good ones. Just depends which vendor you get em from, I guess..and they vary from "OMG NO THIS SUCKS" to "Oo, not bad."

Hannah: Nonono, the four cheese combine to give you awesome happy joy!!!

yeah.. it sucks when something you remember to be so delicious isn't as good as you remember it the second time around.

your donut pic is droolicious though!

I like donuts...where I live, we have good donuts:)

Aww poor manatee...I am pretty sure he is traumatized for life...maybe he needs a cookie...

Mmmm...that pasta looks really good...and since I have no Otto, I will just have to figure out how to make it on my own...:(

You are a woman after my own heart --- grilled cheeses with tomato, big jars of fermented goodness, and a freaking giant manatee??? Will you run away with me, Ro? Please? :)
- S

joanh: DROOLICIOUS! I think I should incorporate that into my vocabulary.

Kate: GIVE ME SOME OF YOUR DONUTS!!

Manatee is so traumatized that he has to hug me every night. Which I'm okay with.

Steph: Hell, I have no one else, YES, I will run away with you!

Hello, I've actually been reading your blog for a few months now and I must say that this blog is definitely my most favorite form of procrastination! Great photography!

Robyn!!! Some thai food photos for you!!! miss you and nyc!

My mother prepare some delicious donuts and she likes to make heart donuts shapes with candies on it and it looks so nice especially for a kids party.