Whenever I go to a Hong Kong-style diner, it's mostly because I want this: 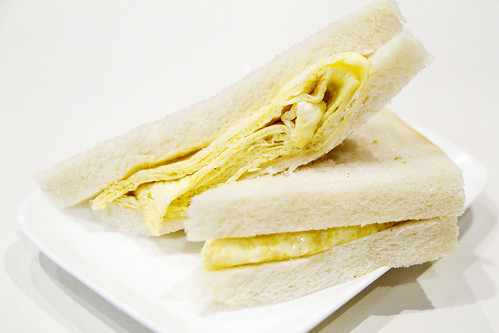 Yup, a simple egg sandwich. Usually a folded omelet-thing or mass of semi-scrambled egg in between square slices of plain ol' white bread with the crusts cut off. Sitting on a menu next to more interesting items like salt and pepper squid or baked ham and chicken in cream sauce with spaghetti, it doesn't scream, "ORDER ME!" to the casual eater. It's a weenie snack of a sandwich that provides two textures: egg-soft and bread-soft. (Sometimes the bread is toasted, in which case you've got some crispness in there too, but it's mostly soft.)

But damn, how I love that soft-on-soft. Out of all the kinds of egg sandwiches in the world, this one is my favorite. That sort of buttery, fluffy scrambled egg mass on soft, squishy Chinese white bread. Sans crusts. That's important. There's no reason five-year-olds and tea sandwiches should get all the joys of a crust-less existence.

My attachment to these egg sandwiches may be sentimental—when I was a kid my mom made me egg sandwiches the way other moms made their kids peanut butter and jelly sandwiches—but ignoring my plaintive-grasping-of-childhood thing, I'm pretty sure these sandwiches taste awesome. Besides, my mom's egg sandwiches weren't very good. (She knows it's true. The whole wheat bread she used was the antithesis of Chinese white bread. And she sure as hell didn't slice the crusts off.)

If you think the egg sandwich ($1.75) pictured above from Cha Chan Tang (the Cantonese name for Hong Kong-style diners) looks boring, check out the gold-star version from Australian Dairy Company in Hong Kong at The Ulterior Epicure. A beautiful example of fluffy egg mass on thick white bread. 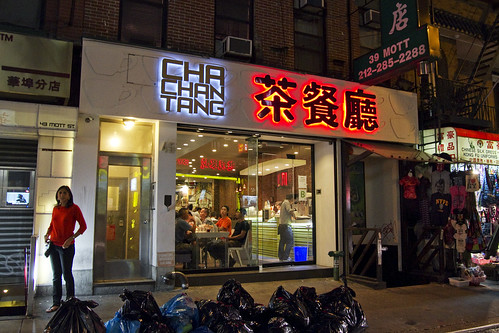 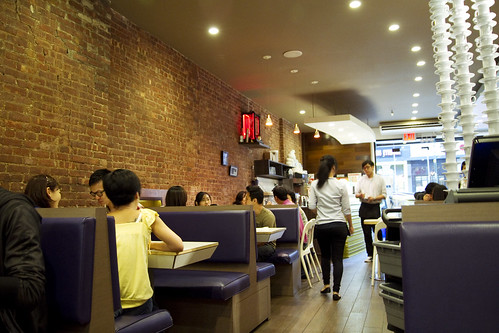 I don't mean to knock Cha Chang Tang; it's become my go-to when an egg sandwich craving hits. While I can't say it's the best—I haven't tried all the Hong Kong-style restaurants in Chinatown* to know, nor do I have any point of reference since I've never been to Hong Kong—it stands out for having a leg-up (wait, did I make a pun...I DIDN'T MEAN TO) in the decor department compared to other restaurants in the neighborhood.

* Some other HK-style places: Coluck, Hon Cafe, Ming's Cafe, S. Wan Cafe, 328 Cafe, and M Star Cafe (their website plays music automatically, but do check it out because it's kind of awesome). 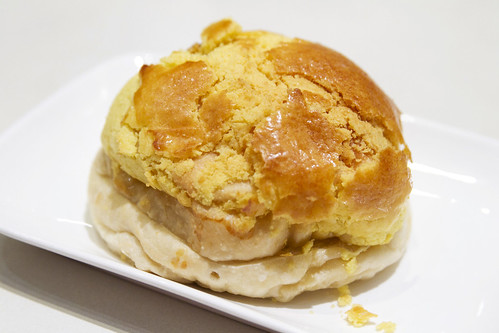 It also helps that their menu includes the almighty buttered bolo bao ($2.25). A bolo bao, or pineapple bun, is a beautiful thing when done well: mildly sweet, bready, soft-n-squishy, with a crumbly cookie-like top crust. 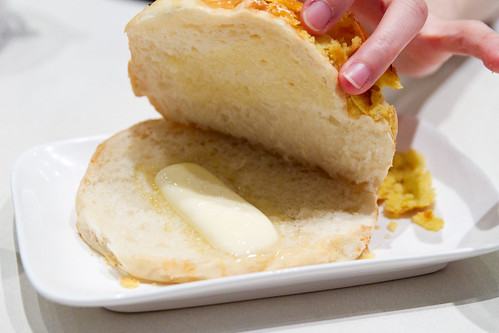 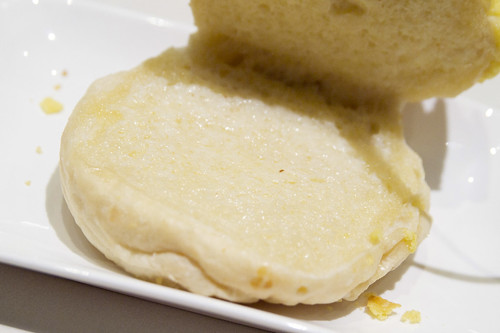 The butter might come already spread. Or still a pat. Either way...[thumbs up]

But it's even better when warmed up, sliced through its belly, and given a good slathering of butter. Why have naked bread pores when you can have butter-soaked bread pores? The answer is, [blank stare, mouth slightly agape, tumbleweed], because there is no answer. I wouldn't want to put much else in the center of a pineapple bun—I like them because they're simple—but a hit of butter-derived moisture is always welcome in my book. And by book I mean mouth.

...And I guess I lied about it always being welcome in my mouth. That would've been valid before starting my asthmatic's diet. Oh well. Go enjoy it for me!

Hey Robyn, haven't been around these parts in a while and read like a whole bunch of posts in one sitting. Really hope your new diet treats your tummy better!

Anyway, just wanted to say that the Australian Dairy Company's egg sandwich sets with ham, macaroni soup and tea is all kinds of awesome. You HAVE TO TRY IT! And the milk pudding is fantastic too.

BOLO YAU!! Gotta be one of my favorite things on the planet.... (memo to self: book ticket to HK)

Your mum so reminds me of me (as per what I would allow my child), whole wheat or die - I only hope my daughter has similar accurate and fond memories! (And I'm going to try to make this egg sandwich - I've never seen anything like it before).

the bolo yau's pat of butter is at least 1/3" thick and a post-it note yellow color here in Hong Kong - I heard the scrambled egg sandwich is super amazing at a similar place to the Australian Dairy Company due to the milk they beat the eggs up with... extra fluffy and creamy :)
hope you're keeping healthy and away from allergies!

When mom and I went back to HK last October, she ate the infamous bolo yau at this famous cha chan tang in Mongkok. Somehow, the butter in HK tasted different from the ones here...better? Sort of...definitely a 'heavy' snack though, lol.

von: Thanks for reading! I would love to try that sandwich/macaroni/tea set someday. Sounds like a great breakfast. Or lunch. Or dinner. :)

FN: I must get meself to HK toooo. I will eat so so so so much.

Anonymous: Hehe, "whole wheat or die" sounds about right. ;) Now my mom's not into whole wheat, but she'd rather I not eat any wheat, so...yaaa. Hope your sandwich comes out awesome!

floho: Arrgh I've gotta get to magical bolo yau + fluffy egg land. :[ Alas I think it would be bad for my health, but uhh WHATEVER! I seem to be keeping fairly healthy right now. At least, I don't feel horrible!

kim: Ahh, that sounds awesome! Man, why didn't I ever go to HK when I lived in Taiwan? My mom went a few times when we lived there. Then again, I wouldn't have appreciated the food enough as a kid.

Diet is going fine! Can't say I feel like a shining beacon of health, but I don't feel super crappy, so I guess that's...goood.

My mom also used to give us ice cream in hot dog buns when we'd run out of cones. I think she may also have given it to us on regular sandwich bread, too. She was clearly ahead of her time.

I would add Dai Wong (http://g.co/maps/qakkn) off of Mott Street to your list of HK-style restaurants in Chinatown. It's probably the closest thing I've had to an HK-style cha chan tang. I went to a different cha chan tang almost everyday I lived in Hong Kong for a summer and like Dai Wong, they all had the mismatched artwork, the abrupt waiters and lightening quick arrival of your food. Congee, pan fried flat noodles with beef, and some fresh choy with garlic - the meal of HK-style diner champions. Dai Wong executes this excellently.

the egg sandwich reminds me of my grandma. i used to wake up early just to share the quiet time with her in the morning. she would make me a crustless (white bread, of course) egg sandwich and hot milk tea. no one has been able to make it like her. however, i'm sure one of the hk cafes you shared might be quite close.

Julie: Ahh, I remember cold egg sandwiches...also, sort of soggy after sitting in my bag all morning. And maybe smushed. Poor sandwich. :[

I never got an ice cream hot dog/sandwich! Hot dog bun..I'd be down with that.

Jennifer: At first I was like, "Dai Wong?..what's that?" Then I saw "Big Wong" on the map and ahh, yes, it all fell into place. :) I've never been there, somehow, despite passing by it about 4 blahjillion times. I've gotta check it out, thanks!

kristina: Nice memory! I wish someone had made me egg sandwiches and milk tea when I was a kid!

I've never tried the egg sandwich from Cha Chan Tang before; I'll have to next time! I usually go for the bottle tea and the hot dog ramen. :)

Truly awesome! You've just rekindled one of my best memories from early morning at school when my dad used to give (my sibs and I) a few serviettes piled high with fluffy salty egg/omelettes piled up in buttered bread! I'd forgotten how good the simple things can be and yes, my dad's from Hong Kong & Baolo Bao is one of his faves!

serena: Hot dog ramen!...I'd be into that. Hope you like the sandwich!

girl in a food frenzy: Nice memory! I rarely ate breakfast growing up, which went against everything I was taught about how not eating breakfast every day would spell EPIC DOOM. (I turned out alright though! Sort of.) If my parents had cooked omelets and bread, maybe I would've wanted to eat breakfast more often...

fried egg sandwiches are also a staple afternoon snack at our house! i put ketchup (banana) on mine. it looks like a wound, but i still love it.