This entry originally took place on September 13. Here's part 1, in case you missed it. Not that you would since you read this blog all the time! Haha! HaaaaaaaI'mwatchingyou. James and I started our day at the New Amsterdam Market by the South Street Seaport. But Ed already blogged about it, so I don't have to.

I've only been to the market for work-related purposes, i.e. to take photos, but it's worth checking out if you like farmers' markets and want to try some local food vendors (mostly those specializing in making loaves of carbs). I love the idea of having more food markets in New York City, but my lack of need for fresh produce (that will inevitably go bad in my kitchen) means I don't support them much in the ways of money exchange. Hopefully this mention will bring them other customers who will actually buy stuff.

I didn't take advantage of the samples at the market, but I had a good reason: I wanted to save stomach space for lunch. And not explode. And then there was Shake Shack. The salt and fat-laden beef patty of my dreams. I've already expounded upon my Shake Shack love, so I don't think I have to repeat it.

...But I will anyway. The Shackburger from Shack Shack (the one with all the fixings) is my example of all that is balanced—in texture and flavor—in a burger, possessing just the right combination of bun, beef, and sodium. I say that as someone who has never tried the beloved old school burger joints of Los Angeles, but as James seemed quite smitten with his Shack Stack (I gathered this from his lack of speech and full concentration on devouring, with the occasional "mmm" slipping out between bites), maybe the LA burgers can wait. James' friend Juice (not his real name, but that's what James calls him so I'm going with that) was as fan of his shroom burger, as he should be since anyone who doesn't like like a sandwich of deep fried mushroom and cheese is crazy. I prefer not to associate with these people. I washed down my burger with a Purple Cow, a grape soda float with vanilla custard. You get a choice of one size: "towering bucket." Excessive? Maybe a smidge, but if you like grape soda and frozen custard you're not going to complain. Juice ordered a chocolate and peanut butter milkshake, a combination I had never thought of ordering before. PURE IGNORANCE; it's an awesome combination. The shakes come in much smaller cups than the floats, but that's because they're cement-thick and a larger dose could result in gastrointestinal pain. After Shake Shack, we went into tourist mode and headed to Rockefeller Center to visit the Top of the Rock, aka the GE Building. The short elevator ride is accompanied by a quick light show-ish thing viewable through the car's ceiling that inflates the excitement of the incredibly smooth and fast ride. You gotta get your $20 worth. And you do. At least, I've never seen New York City like this before, and the general consensus is that it's better than going to the top of the Empire State Building (which, although 30 floors taller, doesn't necessarily offer better views) because you can't see Central Park from the ESB, Top of the Rock is less crowded, and you can actually see the ESB by not being in it.

Looking at photos of the view doesn't compare to how it feels to actually be up there. Even though 99% of the people on the roof were tourists, I think it's worth going to even if you live in the city. Sometimes those touristy things you wouldn't do on your own end up being much cooler than you'd expect. I'd love to go back at night. ...When it's snowing. 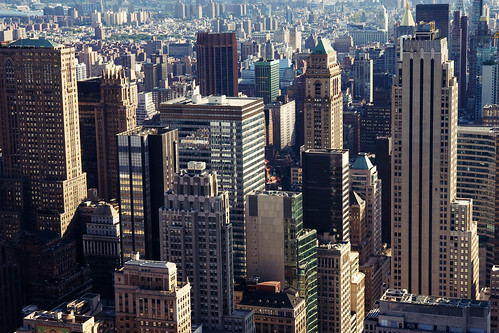 I'm a fan of living in concrete jungles. Not that I don't enjoy trees and dirt and fresh air as well, but I'm almost ashamed to say that I'd rather be surrounded by "city" with the occasional jaunt to nature than the other way around. I feel guilty for not appreciating nature more. When I'm in it, I enjoy it as a respite from regular life—but it doesn't make me feel at home. I don't know if that's related to when I lived in Taipei as my first city and had the best time of my life, or if that's just the way I'd be whether or not I had lived there.

But back to food. James, Juice, and I went to my favorite Chinese restaurant Grand Sichuan where we met up with Dinh and Colin. As usual, I was in charge of doing most of the ordering. Cold cucumber with scallion sauce: My favorite form of cucumber, doused in a sesame oil and scallion juice-based sauce. I save the sauce for later so I can pour it on my leftover rice. 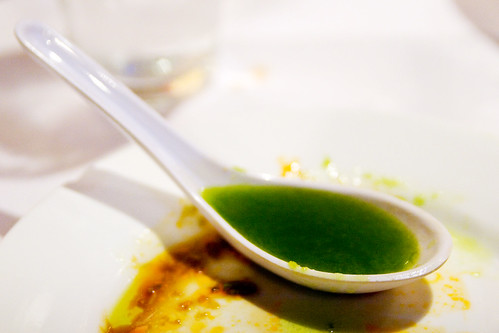 LOOK AT ALL THAT SAUCE. Sichuan wontons with red oil: If you don't think you like wontons, you haven't tried these lil' pork dumplings coated in spicy oily sauce. 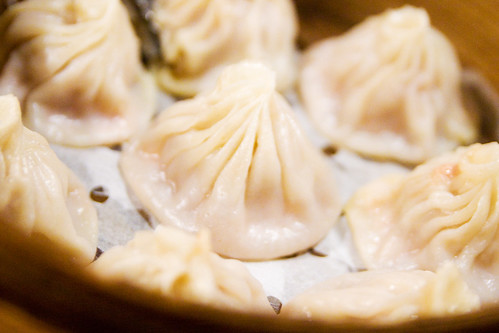 ITS GOOD FOR YOU.

Sauteed spicy Chinese broccoli: This version was a gazillion times better than the same dish I had at the Grand Sichuan in Chelsea. Vegetables were cooked to that perfect tender/crisp point where a vegetable has just crossed the line between raw and digestible. The one in Chelsea was just a bit under that line. 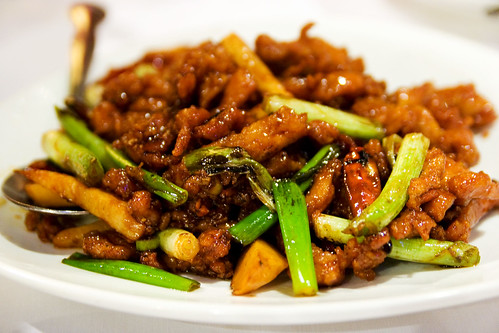 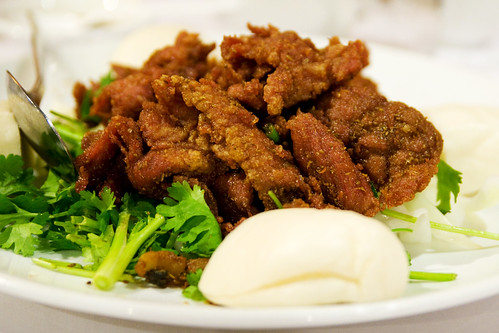 Cumin beef: Perhaps too cumin and salt-laden for some, but it's easy to temper the seasonings with rice. Like the Gui Zhou chicken, it's crispy and tender, this time in fillet form instead of nubbin. HIGHER CRISPY SURFACE AREA-TO-MEAT RATIO = SUCCESS. Bean curd with cashew: Although it looked boring on paper, this ended up being a great vegetarian option. The fried tofu chunks had a pleasing combination of crisp (I know I've said "crisp" too many times by now, sorry) outters and soft innards, and ...I like cashews. I thought the lack of burning hotness might result in something that tasted meh, but whatever brown sauce it was coated in was flavorful enough. I'd like to eat it again, even not as a vegetarian who is adverse to spicy food.

And thus was the end of the Robyn-assisted James eating adventures in New York City. James did more fooding the following day with chicken, pizza, and kimchi fried rice before leaving for Los Angeles that afternoon. What a good eater he is.

New Amsterdam Market
South Street between Beekman Street and Peck Slip
Currently only happening once a month; check their website for more details.

My parents were in town this weekend and of all the city had to offer, they were most excited about Grand Sichuan. It's possible their Gui Zhou chicken has gotten better lately—in the past it was a little less spicy, a little too sweet and less crisp, but the one we got this weekend was awesome, giving the Chong Qing a run for its money.

which Grand Sichuan do you like the best? i always pass by the one on St. Mark, but didn't see a reason to have Chinese food on this block.

Loaves of carbs, LOL! I like how many of the dishes are glistening.

maggie: I used to thin I really liked the Chong Qing..UNTIL I HAD THE GUI ZHOU. Mmmm.

Christina: Mmyes, Chinese food has a tendency to glisten. :)

This post has re-motivated me to find a decent Chinese restaurant in PDX. Everything looks so delicious. Thank goodness you cushioned the tofu dish with some meat or your system may have gone into shock! ;)

Ms. Blake: I hope you find a restaurant! And yes...tofu cushion for the meat. Totally works. (Maybe not.)

i went to eat at the Grand Sichuan once but it was the one in chinatown, next to the scary potentially life-threatening "chinatown buses." i thought it was okay but i'm not really a fan of spicy chinese food so i kind of wussed out and ordered everything "mild" which still tasted pretty damn spicy to me.

and omigod, your photos gave me vertigo. i could never do the touristy thing and go up the empire state building/statue of liberty/etc. i would probably faint in the elevator in anticipation of the staggering view.

also, i love south street seaport. they have cute shops there. i've never had that weird towering bucket of purple soda w/ vanilla custard though so now my curiosity is piqued. hmmm.

oh wow i LOVE those city photos! i, too, love living in the concrete jungle having grown up out in the sticks.

OMG! That food looks so yummy. Especially the Gui Zhou spicy chicken and the cumin beef! I love really flavour full dishes paired with my rice.

Whoa purple cow. And I love the wontons in red oil at Grand Szechuan also. Do you have an opinion on Szechuan Gourmet in Midtown, though? Their mapo tofu is serious stuff.

Adelyn: Aw, not a fan of spicy chinese...I WUB IT!! I will have to organize some sort of group dinner at Grand Sichuan and feed you.

The towering bucket is from Shake Shack. OMG WAIT HAVE YOU BEEN THERE, cos if not I have to bring you there too.

clekitty: I really love anything with my rice. I LOVE RICE SO MUCH.

I really should stop reading your blog at 2 am. The food shots just kill me ;)

Does Grand Sichuan have other traditional Sichuan like thrice cooked duck (or even chicken) and spicy eel and all that cool stuff? The dumplings look great and so do the wontons! I love Sichuan, but so many restaurants in the US use Sichuan to mean "spicy"! I'm from out of town but going to be near the Financial District. Any suggestions?

I love love love Grand Sichuan and I go there everytime I go to NYC. Thanks for introducing me to the cucumber with scallion sauce. That looks really good, and I'll have to try that the next time I'm there. I love the chicken there, and the spicy wontons are really yummy too. Can't wait to go back!

Love your blog (and writing). Lived in the city this summer but I never made it to Shake Shack. I know deeply regret that...

WOW! how great are the shake shack burgers! I'm from Australia and went to NYC recently. I so happen to walk past Shake Shack on the way to the National History museum. Yummiest burger! The cheese fries were awesome too.
Def will look through your blog for more NYC ideas (making another trip very soon!) thanks heaps for the ideas and great blog + pics!

This looks delicious! I just actually moved to the city so I'm looking for some great restaurants. My roommate recommended a food show called Cook Eat Drink Live to kind of get a sample tasting of all the nyc restaurants.... have u been? do you know the show? i'd love some feedback before i buy my ticket!