We're going to start a "Top Five Burgers" feature on A Hamburger Today next week, so I figured I'd do my own Top Five as a template to show future contributors. I haven't eaten enough burgers to be the authority on NYC burgers, but here's my list anyhoo.

My favorite kind of burger is fast food-style (not actually from a fast food joint), but that preference doesn't dominate my Top 5 List. For a burger to stick in my mind, it should be on a squishy, appropriately-sized toasted bun whose texture doesn't interfere with the meat, and the patty should be well seasoned, have a bit of char on the outside, and be soft and preferably oozing with beef juice. That usually entails being cooked to medium rare, but if a place can cook a juicy well done burger, that's fine with me too. 1. Shake Shack: Griddled, buttered potato bun and a juicy, fat-oozing, well-salted patty with a crisp crust = by far my favorite burger in the city, or anywhere else for that matter. The four-ounce patty size is a plus; I like knowing that I can eat a Shack Burger and feel satisfied without going into a food coma. [Review] Madison Ave and East 23rd Street, New York NY 10010 (map); 212-889-6600; shakeshacknyc.com 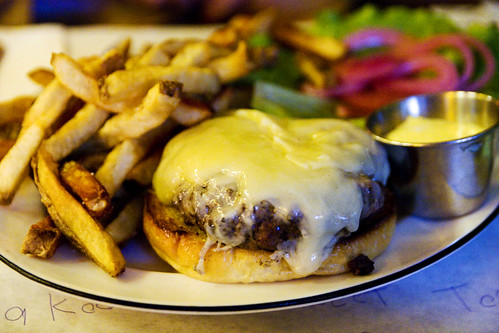 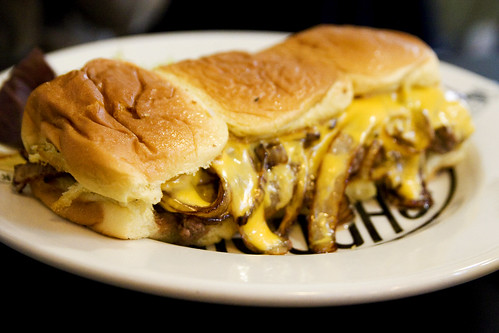 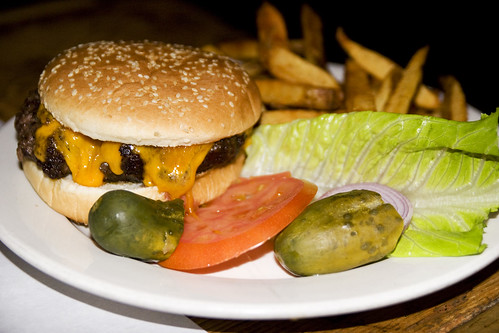 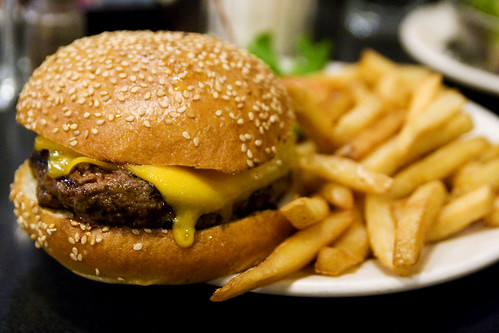 5. Veselka: The bun is an awesome uniquely airy chewy thing and the meat is an awesome fat juicy patty thing and they meld together quite harmoniously. For extra win, you can follow it up with BLINTZES! [AHT review] 144 2nd Avenue, New York NY 10003 (map); 212-228-9682; veselka.com Bow down before it. Come on.

Way back when on August 4, I went on a Double Shack Stack mission with Lee Anne, Scott, and Nathalie. Lee Anne and I split the behemoth creation made of two cheeseburgers and a 'shroom burger topped with lettuce, tomato, and shack sauce. Result? LIFE-CHANGINGLY AWESOME. Maybe. ...YES, DEFINITELY. It's like a regular, already-awesome Shack Burger enhanced to the 20th power with the substantial—yet at the same time delicate—crunch of deep fried portobello goodness and the gooey torrents of cheese that spurt out of the shroom's belly and smother every bite in lipid-based happiness.

August 4 was a damn good day. 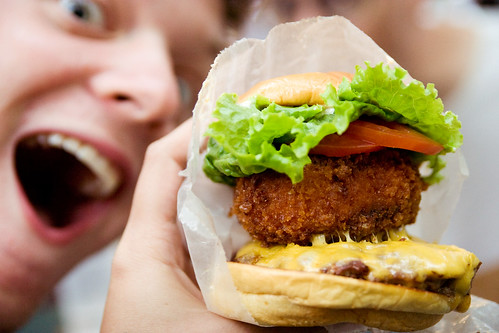 Jim's hongry. Are you?

The single-patty Shake Stack is another fine specimen of Shake Shack engineering. It may not reach the outermost stratosphere of moan-filled deliciousness as the double would due to the one less patty's worth of beefiness, but it gets close enough and has the plus of being a one-person meal. Not to say one person can't eat an entire double as well, but you have to draw the line somewhere.

..Hahaha what, I'm kidding; NO LINES HERE. Eat whatever the hell you want. Just not all the time.

I almost can't look at those pictures... They're just too beautiful.

That is the hugest burger ever. Need to get myself to Diner, seems like all the cool kids are talking about it...

man, look at all those burgers. you and adam with these lists of burger pictures... not helping when i want to eat more healthy!

keep it up though, who needs health? burgers are better.

You have the best taste in burgers. My god, Diner's burger smacks you in the face with goodness.

You probably already know this, but because I have a semi-professional sideline in pointing out the obvious, you should scope the lunch burger at Prune if you like butter in your roll equation.

I think their English muffins get half a stick each. If it were a whole stick, I'd probably just set up a tent outside the restaurant.

Wow! You take beautiful food pictures. I love Shake Shack too and their special sauce...No room for the Burger Joint though huh?

Reading this before I go to bed has almost guaranteed ill be dreaming of burgers! Im not a huge fan of grilled onions on burgers but those sliders from shopsins look awesome

Maja: You know what you gotta do now..is eat a burger.

maggie: YEAAH! I've only been to Diner once; I need to go again.

Danny: I wanna eat more healthily too. But my job says NO.

JO: Glad you're with me on the Diner burger! I like me some butter smack.

Nicole: I've only been to Prune once for brunch and it was ooookay, so I haven't felt like going back. But the butter burger sounds tempting..!

Underground Dining: I tried Burger Joint once, but didn't think it was as good as SS. :(

Edd: THE SHOPSINS SLIDERS ARE SO GOOD. I like onions on burgers just in slider form, hehe.

Shake Shack is like a lard-laden nuclear bomb of mindblowing delicious in my mouth. Who doesn't love it?? However, every time I go to the Shack, I gather my courage to get the Double Shack Stack, but by the time the long line ends and I am at the counter with .5 seconds to tell the cashier what I want, terror fills me with the thought of having to consume that beast of a burger, and I sheepishly order the usual Shack burger. Your picture of gooey, bursting with cheesy wonder is really motivating me though. I may just print it out and stand in line, and maybe succeed the next time.

Yay! Your awesome pics made me have an ephiphany today Robyn! All summer I've grimaced every time we've had BBQ hamburgers tho' I've been lovin all the ones we've had eating out.

Your pics helped me realize it's because everyone is buying those pre-made bbq patties and department store buns. Blech!

I vow that from now that at home I am cooking burgers from scratch like they make em in your pics. And, we'll get potato buns at our fave bakeries. Down with the convenience whorage of our food systems and up with the flavor!

Shake Shack is definitely awesome. I used to love getting the Double Shack Stack when I was still living in NYC... finally a tasty burger that is appropriately sized. (Though it used to just be called the Shack Stack, but it seems to have been recently downsized.)

Shine: I've never made burgers from scratch, but that's definitely the way to go. No more premade patties for you! ;)

Albert: What a fool I was to not try the Double Shack Stack until now. (The name changed sometime after I ate it in August. :O I guess the new names make more sense though.)

I have not been to NYC in a long time (am at university abroad and have been spending my $$$ visiting other places). But most of my friends and family still live in NYC.

I hear so much of this Shake Shack, that it makes me want to fly to NYC right now just to give it a go!

Those pictures are making me drool. Veselkas is about 2 blocks away from me and I've never had their burger, I always end up with the belgian waffle. Definitely getting that yummy looking burger next time...with the side of blintzes, or maybe pierogies?! Thanks!

For the Spectators: I don't wanna overhype it...but..it's pretty damn good to me! One of my friends said it was too salty. Waah. Maybe I like salt too much.

margaret: Someday, technology should make this happen. Or just have some ...hot beef on hand and put it on your desk.

Briana: WHOA ooh you better try the burger next time! Let me know what you think!

Haha now i see all the burgers you had to go try!
Your pics are all fabulous! I'm actually really curious to see how delicious you're going to make boqueria look

Thanks for the food coma and without even having taken a single bite of any of those delicious boogers. So unfair.

Its called Unchi and its for good luck!

Jamie: Ah, I'm afraid those photos didn't turn out too...awesome..well they're okay. I shall let you know when they're ready!

Doug: Was that meant for the other post? ;) Thanks for the info! GOOD LUCK POOOO!!

Yum! This is making me so hungry for a burger! Great pictures!

I still don't consider myself a burger person, but holy cheese was that thing impressive. Next time I'm within range of a Shake Shack I may have to bite the bullet and attempt to consume one on my own. I can totally dew eet >=O

Nathalie: Shake Shack can convert non-burger peeps to burger-dom. ;D Yup, you gotta eat one yourself next time!