This entry originally took place on April 23, meaning that I am now officially two months behind. TWO. MONTHS. Anyhoo, I have just one more post about Iceland after this. Pinky swear. Check out my other posts about Iceland to refresh your memory because, like me, you've probably forgotten a lot already. 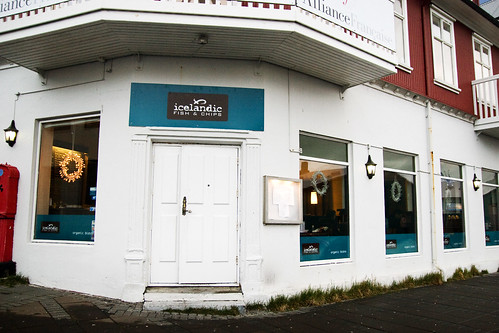 We ate dinner at Icelandic Fish and Chips per Sarah's recommendation, besides that I always have an underlying craving for that beloved food group: deep fried things. (It's the purple section on the right! ...Haha, no it's not. I don't know what the hell that is. "Purple food.") Fried meat. Fried carbs. Fried sugar. Fried ice cream. Fried batter. Frying is the magical process that can turn anything into a crispier, tastier, and less healthy version of its original self. And since I'm not a doctor nor a nutritionist, I have no problem endorsing the dumping of foodstuffs into vats of gurgling oil.

In a world where people like to deep fry anything—because dammit, we humans just like exercising our rights to create extravagantly disgusting dishes that no one would ever actually want to eat—Icelandic Fish and Chips is taking a healthier approach to deep fried fish and potato sticks. Their batter is made of spelt and barley, they bake their fries instead of fry them, and their dipping sauces are made of skyr, the beloved Icelandic yogurt/really soft yogurt-like cheese. Judging from the packed dining room that Thursday night, Icelandic people are loving it. 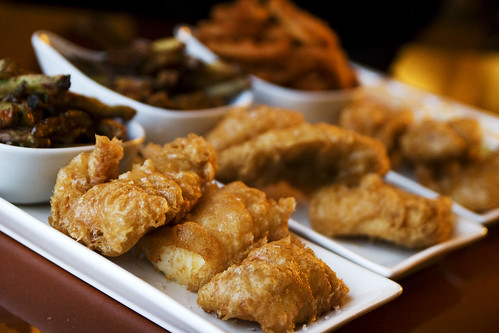 Greg, Diana, and I split three orders of fish, three sides, a vegetable dish, and a bunch of desserts. On retrospect, I don't know why we ordered so much. Granted, we ate just about everything, either out of hunger or because "it was there; why wouldn't I eat it?" 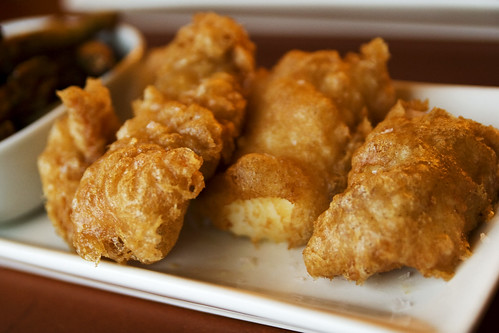 Here's a fish. Plaice to be exact. I think we only ordered two kinds: plaice and wolf fish (other types of fish had already run out). 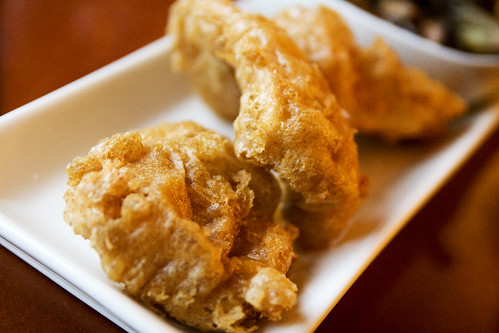 By golly, it's another. 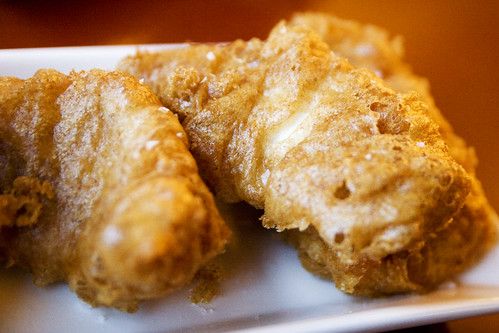 Their menu says that the spelt and barley give the batter a unique lightness and crispness, which you can almost see in these close up photos. As advertised, the batter provided a light and crisp casing for the moist, tender fish within without falling apart or getting soggy. 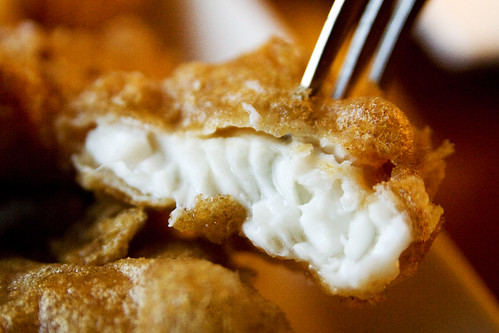 Innards! How they glisten!

Plaice was unanimously declared the favorite, not that wolf fish was bad. There was something about the plaice that just tasted...better. Of course, I can't tell you what that is. Because I forget. 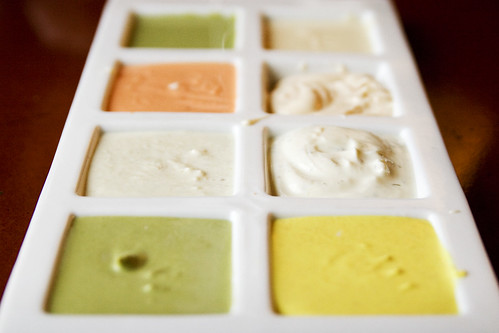 It's easier for me to remember the skyronnaise, which are pretty much like mayo-based sauces but with a slight hint of tang. Since we're indecisive and wanted to try everything we ordered the eight-flavor sampler: basil and garlic; cilantry and lime, coconut and curry; tartar, toasted peppers and chilli; honey and mustard; tzatziki; and mango chutney. The clear winner of the bunch was the cilantro and lime for its bright herbal and citrus flavors—if you just get one sauce, get that one. And if you don't like cilantro or lime, then...that blows. 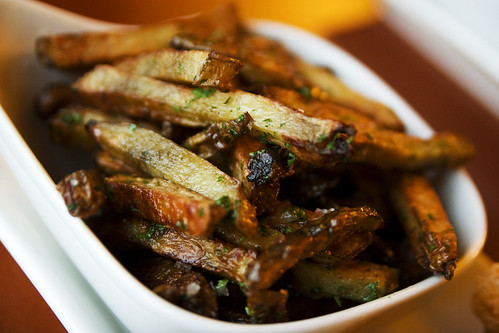 Baked potatoes aren't bad, but baked potatoes posing as fries doesn't quite work. Although I understand the "healthy" angle here, I still say...no. I think they should just deep fry the suckers and embrace the "Chips" part of their name. The healthier batter for the fish works great—I think it tastes better than a lot of other fried fish—but baked potato sticks aren't going to match up to the fried version. Then again, that may not have been the major problem—that the salt was missing was another negative. But I semi-accept that as part of the healthy angle. We also had plenty of skyronnaise to flavor the fries with. 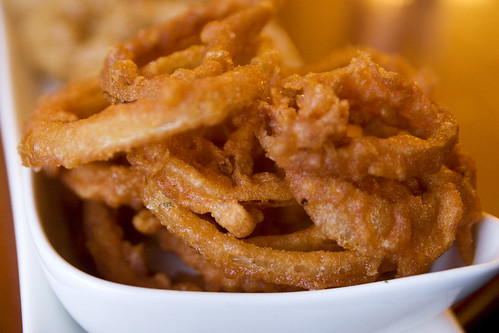 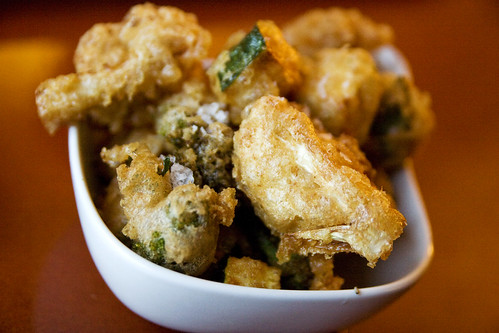 The onion rings and fried vegetables side dish also suffered from sodium deficiency. While they were alright, I wouldn't recommend getting either; stick with the fish. If you really want fries the baked potato sticks will do (you need some sort of starchy component anyway). Slather it all in cilantro lime skyronnaise and you're good to go.

Just like the main dishes, the desserts are also prepared with healthfulness in mind. They make baked goods out of spelt, and use unrefined sugar and agave nectar as sweeteners. 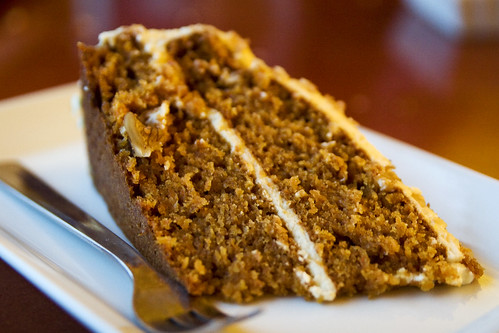 We tried four desserts (they give you the option of ordering half-slices of cake, so we did) although by this point I really only remember the carrot cake made of spelt, raw sugar, and agave nectar. I thought it was fine—moist and spiced and featuring thin layers of frosting. 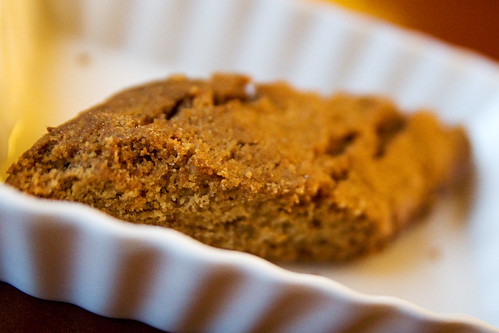 I don't remember if there was anything special about the biscotti, but I think it may have been softer than what I was expecting. 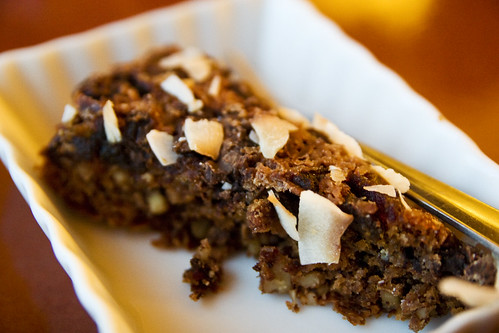 Date cake probably has...DATES IN IT. And what looks like chopped nuts. And is that coconut? Memory fail. 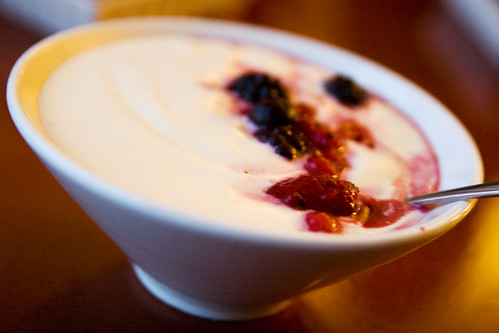 You can't go wrong with skyr and berries. Thick yogurty cheese with tangy fruit bits. And you don't really have to fiddle with it to make it "healthy"—just don't dump hot fudge and whipped cream on it. 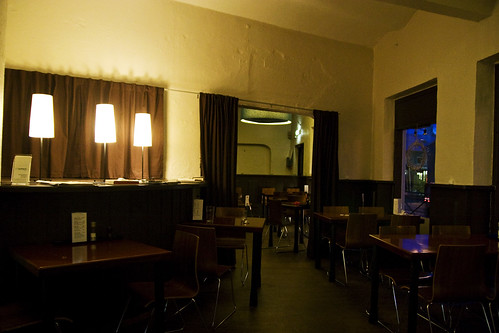 What was once a crowded dining room was empty by the time we left. Oops; perhaps we lingered too long. They didn't make any effort to get rid of us though, which was nice. 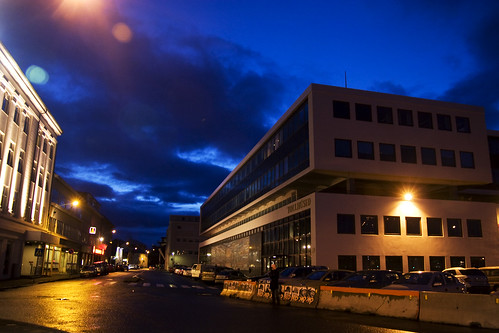 We strolled back to the hotel under a vivid dark blue sky, our last taste of Iceland's late setting sun in the spring. But not without stopping by one last place. 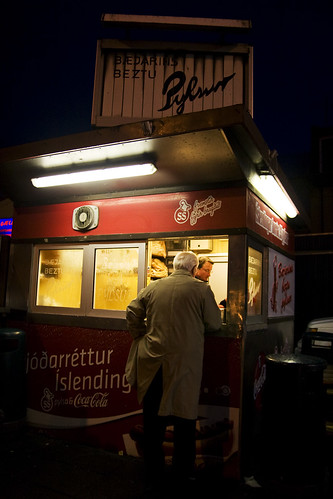 HELLO, HOT DOG! While we wouldn't have gone out of our ways to visit famous hot dog shack Bæjarins Beztu Pylsur (we had gone there on our second day in Iceland), we weren't going to pass it up when it was right in our path. The warm glow from the window pulled us in. Along with meat logs. 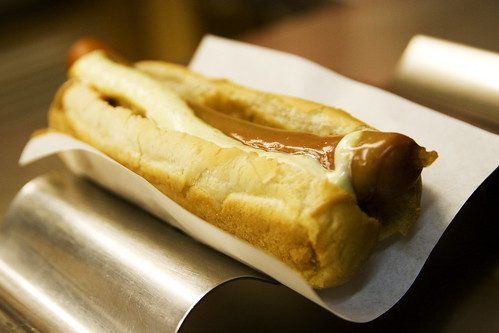 Greg and I exercise some sort of moderation by sharing one hot dog with everything—chopped raw onions, remoulade, ketchup, mustard, and, the best part, fried onions. The fried onions give it that crunchy kick that elevates "soft meat tube" to "soft meat tube with little bits of cronch." The combination of soft and crunchy is one of the greatest marriages I can think of. I bought a little tub of fried onions the following morning (it shall appear in my next post) and when I got back home would put it on anything I cooked. Rice looking drab? Shove some fried onions on top—now it is AWESOME. 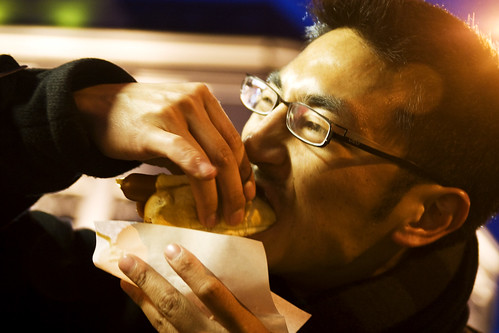 Look at that concentration! The colors! The lens flare! That's how you eat a hot dog in Iceland.

...Alas, this photo makes Greg's hot dog-eating look way more intense than it actually was. But it was still special for being the last hot dog we'd eat in Iceland. Good-bye, beloved Icelandic processed meat product.

fried is still fried, even with spelt. :) But love that spelt concept. Should use that in NY!
Is this the last Iceland post? :(

I LOVE the fried onions - saw those in Denmark too. I've been meaning to go to Ikea to pick up a pack.

Su-Lin: Oh man, I don't think they sell those at the IKEA here..or else I would buy em. I saw them at Whole Foods though; seemed like a Danish brand.

xteethx: I feel like this place was especially salt-lite because of the healthfulness, but I haven't really eaten enough Northern European food to compare it to much else. I just eat looots..of...asian food.

That Icelandic carrot cake just looked plain pathetic when compared to the one in Brighton Beach, n'est pas?

That Icelandic carrot cake just looked plain pathetic when compared to the one in Brighton Beach, n'est pas?

Wow, fish and chips. The chips look a bit scary though. Funny, home baked chips (from the freezer) don't usually looks that darkened. It probably would be better if they just made them fat and chunky and fried them imo.

Hi, we think your blog is amazing! We are just starting our own, and were wondering if you would perhaps like to exchange blog links. We are constantly adding more content, and would love your support! Your blog is a true inspiration for ours.

looks delicious! I love all the mayo like sauces. Interesting and delicious flavors. Beautiful photos, too!

grub girls and Eralda: Thanks for reading!