This entry originally took place on April 19 during my trip to Iceland from the 18 to 24. Check out other posts about Iceland.

Around 6 a.m. I was woken up by the sound of clinking glass. It sounded like Saturday "night" had finally ended and people were picking up the pieces, mostly in the form of beer bottles.

And with a flump of my head, I went back to sleep.

Greg, Diana, and I didn't stir until sometime after 2 p.m., which would've been a more acceptable time had we actually been up all night partying. That aforementioned veil of lethargy was actually more like a sedative-enhanced mallet-to-the-head of lethargy—but a much needed one, as none of us had slept that long in ages. Our bodies obviously leapt (and my "leapt" I mean "didn't move") at the chance to enter hibernation mode.

After reveling in the awesomeness of a good night's rest, we realized we didn't have much time to do stuff that would close within the next three hours. Like Kolaportið, the flea market that's only open on the weekends from 11 a.m. to 5 p.m. Hustled over, we did. 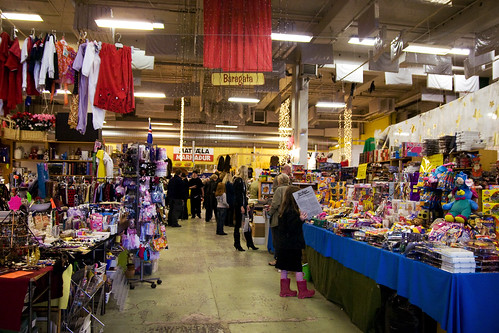 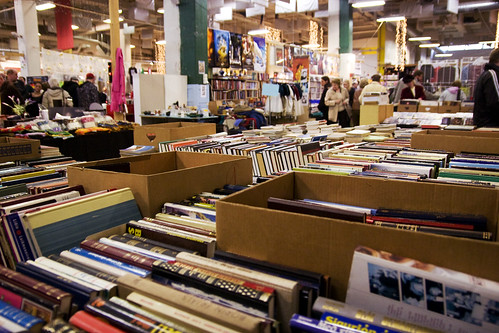 Man, check out all this stuff I don't want!

Although I don't go to many flea markets, I'm pretty sure that Kolaportið was like most other flea markets. Tables overflowed with toys, clothes, records, books, and other bits and bobs that didn't really fit into any other category besides "stuff you would find at a flea market." What made this different from other flea markets was the section of seafood vendors, but I'll get to that later. First: some random products. 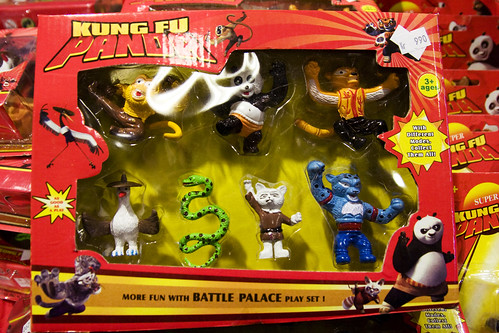 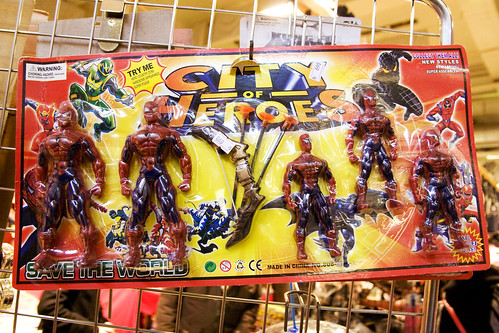 The City of Heroes consists of five Spider-Men in two sizes with a bat-ish shaped something-or-other and three darts to share between them. I found the packaging to be quite poetic:

Too much excitement. Just...too much. 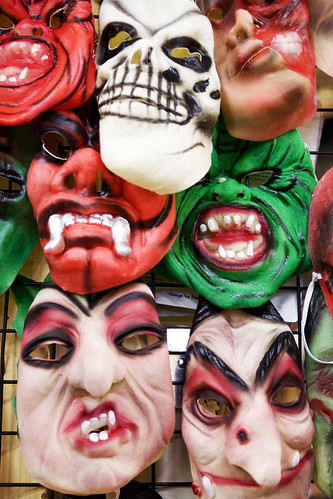 Looking back, I totally should've tried one of these on. 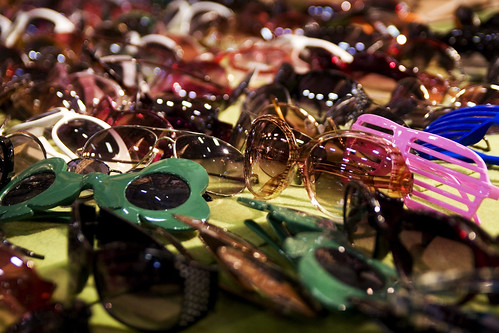 Loads of glasses. I can probably find some of these on St. Mark's Place. Except for the prescription ones. They had a pretty good selection if you had a really weak prescription, unlike mine which is appropriate for the nearly blind. 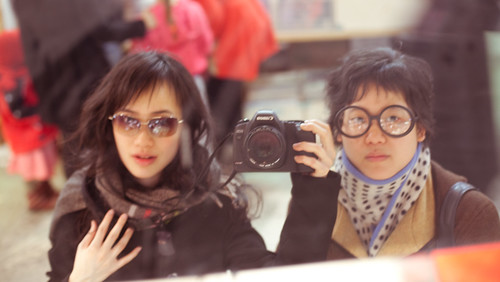 Gee, which one is me? (In situations like this, I am always the one who looks the opposite of chic.) I couldn't bring myself to buy the oversized Harry Potter glasses. 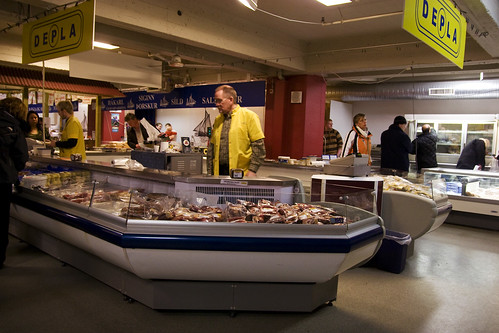 And then there was seafood. Lots of it. if I wanted to cook a seafood feast, this looked like a good place to stock up on ingredients. 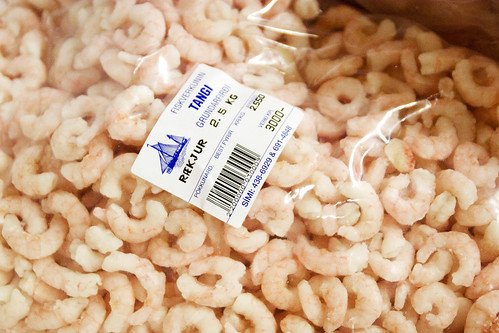 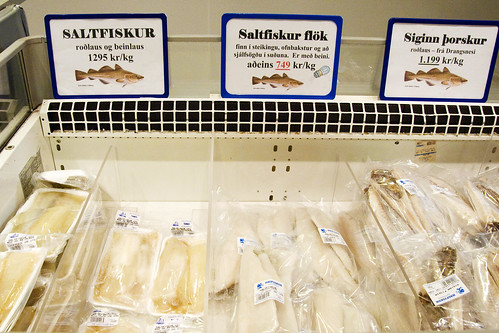 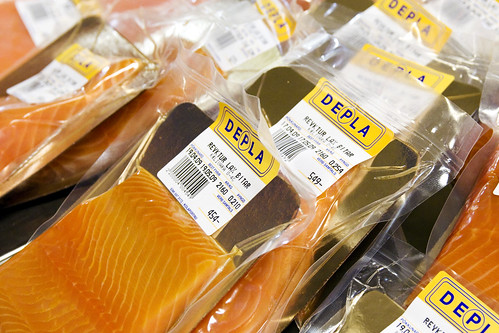 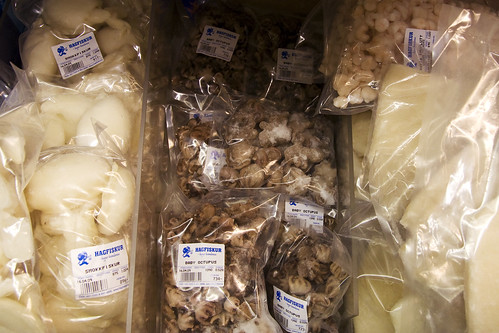 Squid, baby octopus, and other things from the sea... 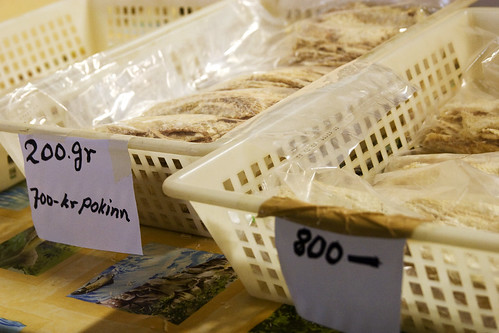 And dried fish (quite unlike the Asian dried fish I'm more used to, as it's just fish, no salt, nuttin else) sold by this cool dude. 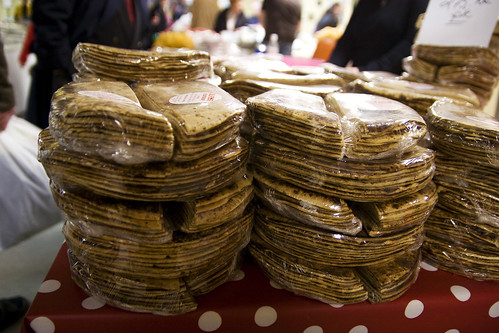 Another vendor was selling mountains of flatkokur (I think it;s a flat, grilled rye bread) and an assortment of pastries.

But what was the most exciting purchase of the day? 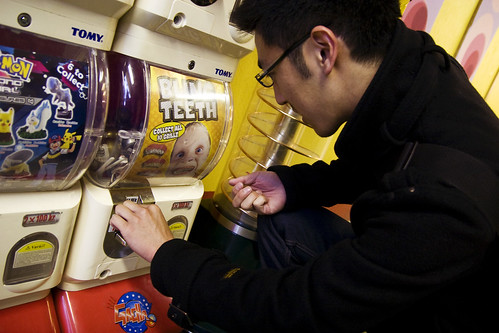 BLING TEETH! Um. Yeah. It was love at first sight when we passed these vending machines by the west entrance to the market. Greg's eyes exploded with glee. It was a match made in one of the stranger parts of heaven. 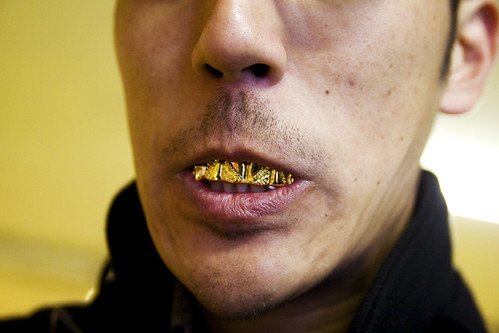 Or it would've been a better match if Greg had the facial structure of a five-year old. These teeth were obviously geared towards the preadolescent crowd, not a man in his late 20s. At least he gold the gold ones; those seemed to be the best.

Since we hadn't eaten lunch yet, this was about the time that our tummies went a-rumbling and we wanted to shut them up. So we said, "Shut up," with those beloved pink logs of processed meats: hot dogs. 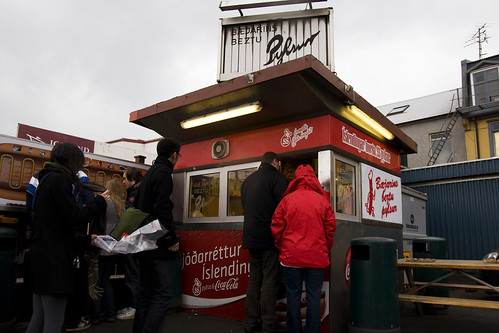 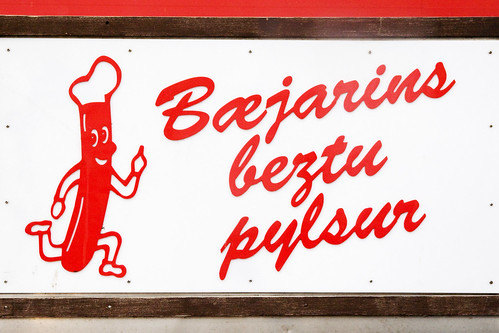 Everything you read about eating in Reykjavik will tell you to eat at the famous hot dog stand, Bæjarins Beztu Pylsur. The name appropriately means, "The best hot dog in town." Whether or not it is, I don't know—I can't imagine the hot dogs vary much at other stands in the city if they're the same brand—but since it's a food landmark, you should check it out. Also, it's right outside the northwest part of Kolaportið, in case you wanna hit both at the same time. 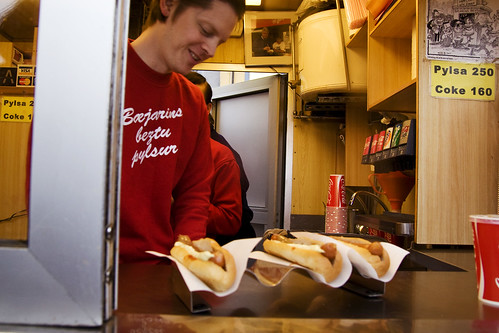 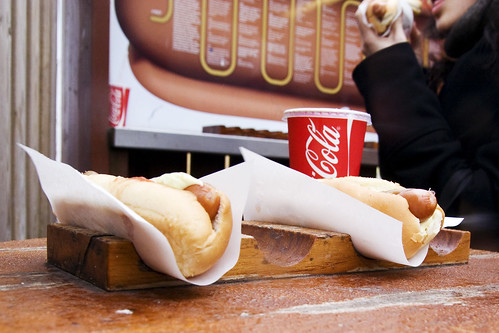 Hot dogs at the ready.

After ordering your hot dog (250 ISK) at the counter, you can take it to go or gather around a notched hot dog holder right by the stand. Even though it was drizzling, we chose to stay put. 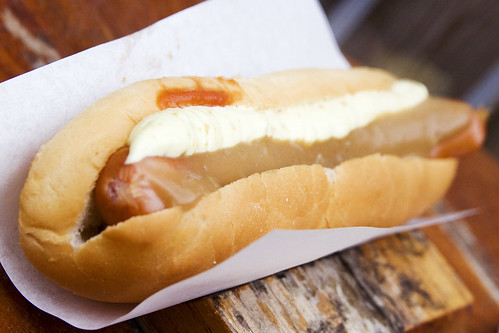 Get in mah belly.

Unless you're picky, you should get a hot dog with everything on it: chopped raw onions, remoulade, ketchup, mustard, and most importantly, crispy fried onions. The two things that stood out about the Iceland hot dog compared to my experience eating New York dogs was 1) the casing was super snappy (I'm pretty sure a popping sound was involved), and 2) CRONCHY FRIED ONION HEAVEN. Snap and crunch (although crunch is probably more important) were what I needed to gain a fuller appreciation of hot dogs. At least, in Iceland. Wikipedia says that Icelandic dogs are made of lamb, pork and beef, perhaps another contributing factor to its tastiness.

But hot dogs alone doth not a suitable lunch make. Or...something. So we walked to Cafe Paris for dessert. 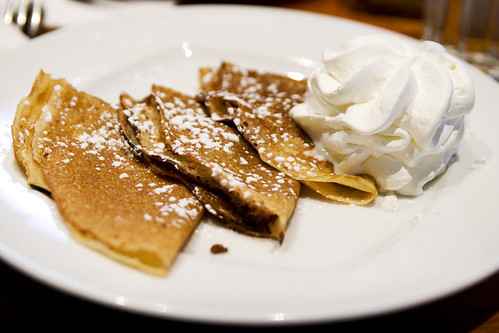 I couldn't not order something called Pancake Delight (Pönnukaka Veisla, 650 ISK), three thin crepes sprinkled with sugar (granulated on the inside, confectioners on the outside) accompanied by a hefty splodge of whipped cream full of that lightly sweet, dairy fat flavor. Icelandic whipped cream is some of the thickest, most resistant to melting whipped cream I've ever had. Which means I love it. 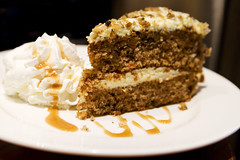 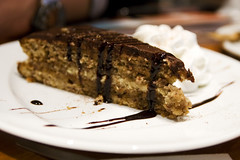 We also got slices of carrot cake and banana cake. Carrot cake, which is the same sort you get in the US, seems to be a popular Icelandic dessert; it pops up in most cafes. Banana cake was like banana bread, but topped with chocolate and layered with some sort of sweet goo. 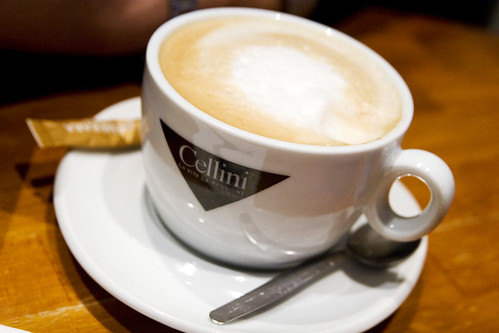 Greg fulfilled the caffeine component of our visit while Diana and I stuck to water.

We hung out in Cafe Paris for more than 2 hours, passing most of the the time by doodling each others portraits with results any normal art teacher would laugh at, except for Diana since she can actually draw. Our stay lengthened as the rain increased its intensity. "Let's wait it out, guys...oh, it just got worse." It wasn't so bad that going umbrella-less would result in getting drenched though. Besides, most people in Reykjavik don't seem to use umbrellas—Melkorka explained that its beacuse the wind (which is normally stronger than what we were experiencing) would destroy them.

Coming up in Part II: more "looking at stuff" and "eating stuff."

Thanks for all this in-depth info! I'm going to Iceland in June and this is so helpful. Would you happen to know if Icelandic hot dogs have preservatives or nitrates (I'm allergic to nitrates)?

Interesting that the Icelandics are so big on crepes and desserts as well.

SUPER ASSEMBLED! Probably means it was blasted together with rockets, in space.

None of these stands were there when I went. :( Do they hiberate during the Winter?

i hope you bought those black glasses! you look like such an intellectual.

Wow...the Nordic countries really like their hot dogs, no? Wait, I take that back - I didn't see so many in Finland. But yes, I love those crunchy fried onions!!!

I loved the hot dogs at "Best in Town,"

Did you go to the Four Fisherman, or whatever that place is called? I ate whale there.

I can't imagine what a hotdog of lamb, pork and beef tastes like, but it would surely be WAY better than your typical Brit dog which is mostly made of fail, and rusk.

Janet: I don't know if they're nitrate free, but I would assume there are some sort of preservatives.. ;_;

Graeme: Oo, I dunno! I thought it was a year round thing. Maybe you were unlucky? :(

krist: I didn't go to any place called Four Fisherman but I did have whale at Sea Baron! Nom nom.

Once again, I am salivating over the Icelandic desserts. And the ones that you guys ordered happened to be my favorite kind. A "crunchy" hot dog kind of scares me.

What camera did you use to take these photos? They're great! (: Was it a DSLR or just a normal digital?

When we were growing up in Mexico, my bro wanted a pair of Air Jordans. What he got was the equivalent of Air Jorges. They feel apart in a few months. That said, I must say those Spidermen did look rather handsome...but "Hero Country Zone?" What????

I wondered where the pike on that particular photo (of the Björn fellow) are coming from ;) At first I thought it could've been a wave of visitors looking up corruption in Iceland!

That flea market looks amazing! Love the bling teeth. I need those for halloween!

OH GOD i didn't realize how old these comments were..um..hi..guys...

Jasmine: CRUNCHY IS SO GOOD, EMBRACE IT!

Stacey: If you buy bling teeth you can be "Greg at Kolaportið" for halloween.

When I lived in Iceland 17 years, I worked in a meat packing establishment making the ever so tasty Icelandic hot dogs. The hot dog is made from pure Icelandic lamb and virtually no fat, unlike our unhealthy American hot dog. There is neither beef nor pork in the Icelandic hot dog. Kind regards, Guðný Laxfoss

Hey,
Those hotdogs are great, and let me tell you that the secret is in the mustard. I was able to recreate them at home only by bringing back SS brand Pylsusinnep (mustard)... SS.is is there website, good luck reading it.

If you want to see some videos from our trip, visit our blog site at FrankandMeg.com

If you want the best hot dog. Try the Icelandic
fish dogs. ( 100% Organic)