This entry originally took place on April 22. I was going to originally make this one post, but it was too freakin' long. There's not much food in this one, I'm afraid. Trust me, I pretty much keep thinking, "Oh sweet Jesus fugnutter this is like the series that will never die." Anyhoo. Check out my other posts about Iceland to refresh your memory. 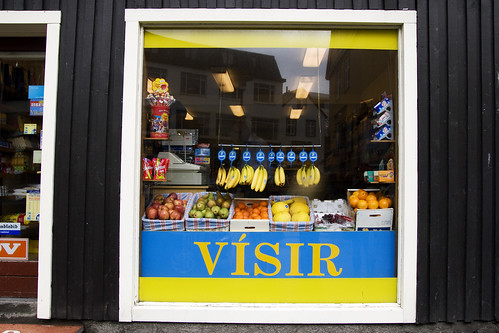 In Iceland, bananas look the same, but BETTER.

After getting my day's worth of calories, Diana, Greg, and I decided we should fit in some of that "non-food related cultural stuff"—museums and such—that everyone has to do when they're on vacation. 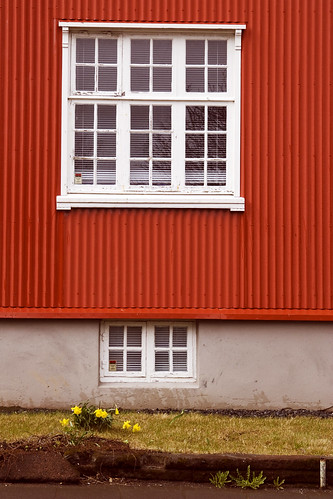 Like observing the many houses featuring corrugated metal of all sorts of colors. Greg was the first to notice this. I just took this picture because I like red. 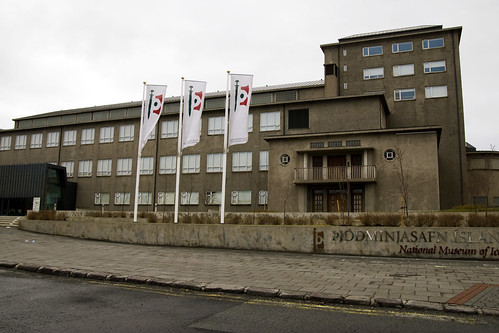 We also visited the National Museum of Iceland where we saw... 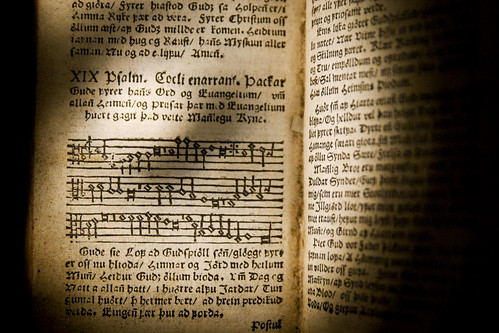 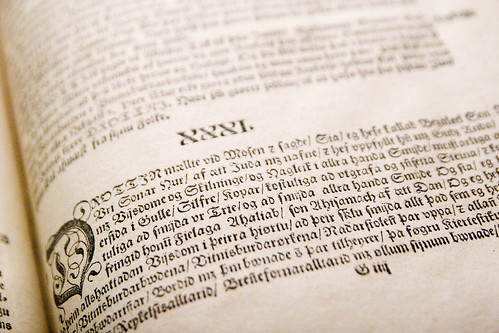 I mean, there was much more than that, but the books were especially pretty. Icelandic words looks lovely. 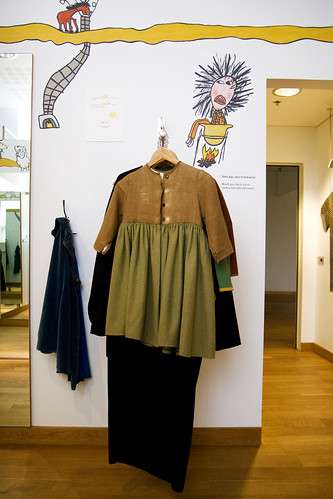 Kids museum and sections of museums dedicated to kids are always more fun than the other parts because kids will become noticeably impatient or bored if not frequently engaged with, while adults may also become impatient or bored, but have been conditioned by the iron fist of society's expectations combined with years of impatience and boredom to just deal with it. In this case, if you're a kid (or about as small as one) you can try on old Icelandic clothing worn by...god knows how many people before you. Try not to think about it as the fabric caresses your skin. 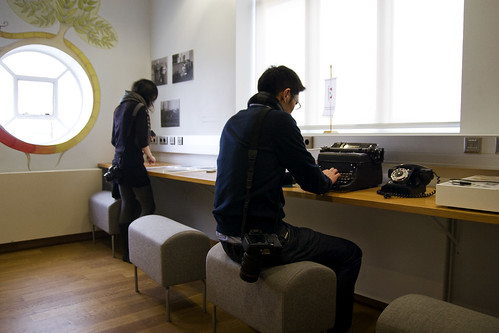 There was another hands-on section sans size restrictions. Greg was especially enthralled by the typewriter. Which is totally understandable since typewriters are awesome. And they make that nice "ding" sound. 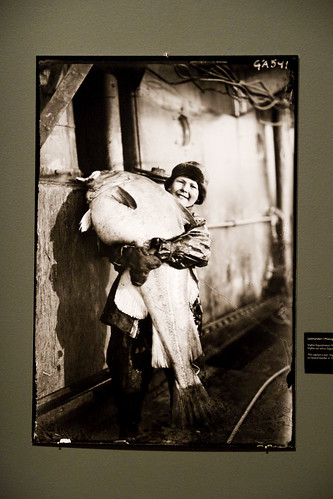 That fish is huge.

One temporary exhibition focused on child laborers from the 1930s to 1950s. I quite liked the photo of the Happy Kid with Huge Dead Fish. 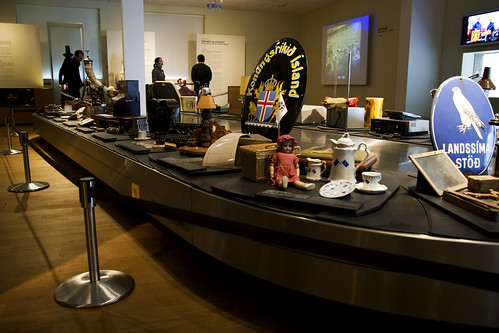 The Conveyor Belt of TIME.

The museum ended with a non-functioning airport conveyor belt repurposed as a display for knickknacks and whatsits representing different decades. 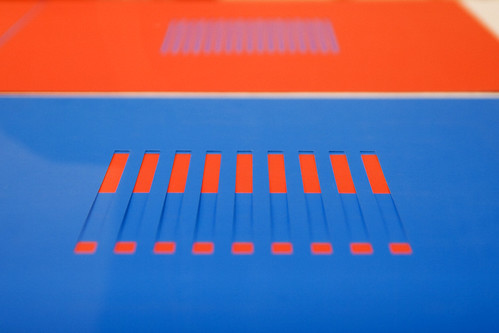 You're not allowed to take photos at the National Gallery of Iceland, but I snuck (snuck is a funny word, eh?) one in since I particularly liked whatever this thing was. I'm easily delighted by bright colors and shapes. Kind of like a three-year old. 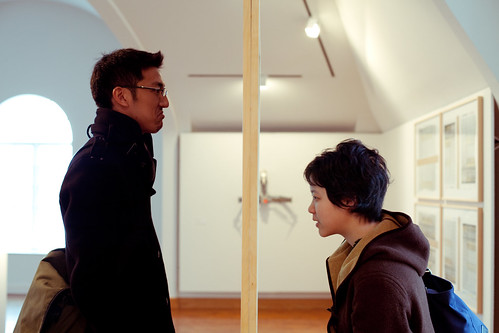 Hello, there. Taken by Diana.

Diana snuck in more than a few, including this funny one of Greg and me staring at a painting of some sort from opposite sides. Greg is quite good at making faces. For whatever reason, he reminds me of a Muppet. 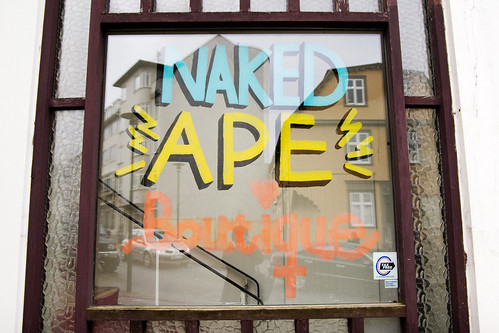 Despite the window's declaration, there are no naked apes inside.

Back on Laugevegur, we went to Naked Ape, a unique clothing store that could've come out of the Soho, with high prices to match. Ahhh well, we didn't visit Iceland to buy clothing...moving on. 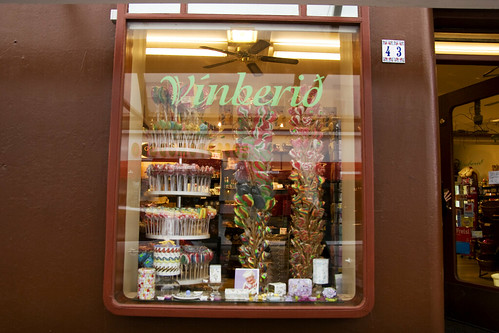 We also stopped into Vínberið (or Vinberid, because I doubt many people are searching specifically for "Vínberið"), a cute candy and chocolate shop. Surprisingly I didn't buy that much stuff. Sidestepping the stuff with licorice in it doesn't seem to leave that many Icelandic treats to choose from. 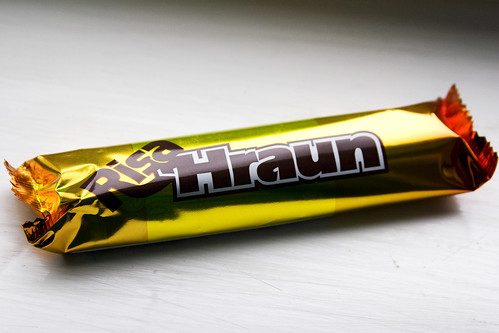 Many of the non-licorice candy bars revolve around rice, wafers, and corn-based things. Think lots of airy and crunchy matter, plenty of which was in my Risa Hraun bar. 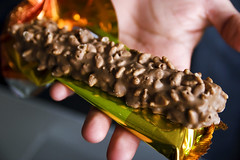 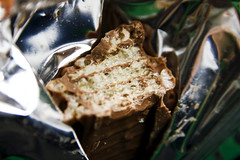 Grapevine.is tells me that Hraun means "lava," which is a very, very, very rough description of what this bar looks like. If you squint, you might think you're looking at a lava field...made of chocolate and rice puffs. With a center of water goodness. It's pleasant, although I would prefer more chocolate.

I love the Conveyor Belt of Time - so completely unnecessary. What do you do if you actually want to inspect one of those artifacts? Follow it around the room?

Would've been cool if it did though. It would have to move reallllly sllooooowwly.

Greg has the Beaker expression in that photo of the two of you looking at that painting. :)

i also realized that a lot of their sweets are chocolate covered rice krispie sorta treats. yum!

Ahh neat sneakily snuck in photos :) That combination of blue and red always freaks me out. Sometimes it feels like the colours are all dancing around and it makes my head hurt.

I love the colors in that store front. So homeyyy...

Manda: AHHHAHA yes, he is totally Beaker in that pic. And I am..just..robyn. sigh.

Kim: I like puffed rice. Looking back, I don't know why I didn't eat more candy there.

SuperChomp: It's definitely one of those "WOOHOO SUPER SATURATED COLOR COMBINATION EYE PUNCH" type of thing. Makes my head hurt too. But it's...preeetty!!

Jess: I love it too! Reykjavik is a pleasantly colorful place.

Edd: Oo, I don't know if I've had a Lion bar before. Shall have to look out for it!

The museum doesn't look very inviting.. and I love museums. Oh my god I love trying all the different kind of candy bars other countries have, I think they are so much more satisfying than the ones we have here.