This entry originally took place on April 22. Yup, this is the longest reblog of a one-week vacation ever. Check out my other posts about Iceland to refresh your memory. 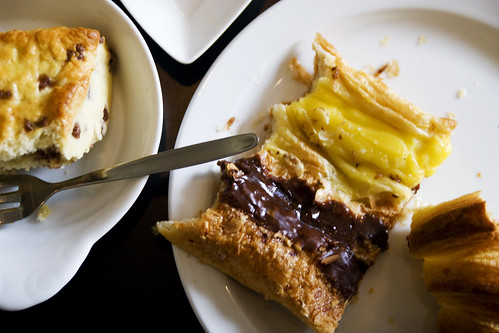 Ain't no better way to start the day than with a blood sugar spike! And that is why I was so happy that just up the street from our hotel was Sandholt Bakery, one of the oldest (or perhaps the oldest?) bakeries in Reykjavik, opened and family-operated since 1920. Many pastries were recognizable as French, while others looked familiar, but not quite. Here's a pictorial tour of the goods. 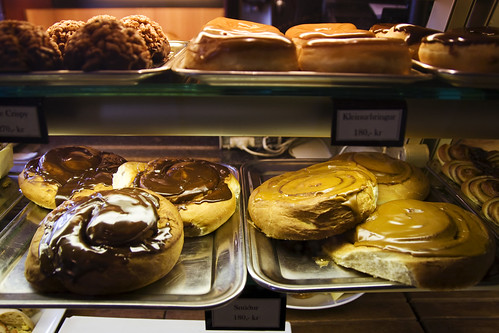 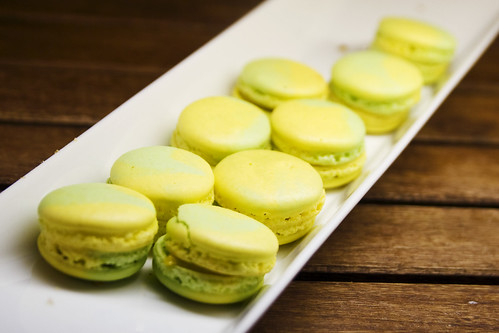 Macarons! Passion fruit! To be exact! 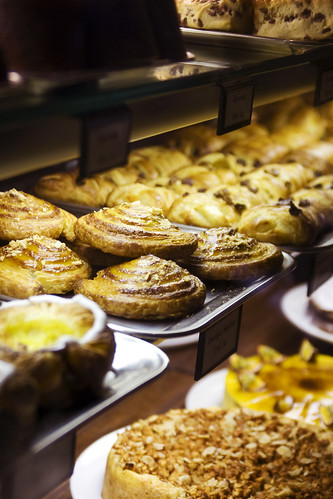 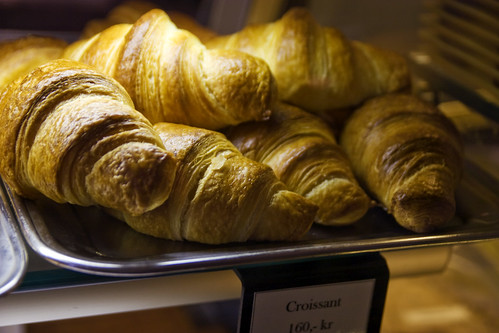 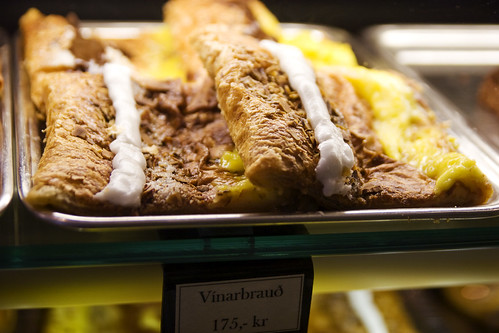 Get in my mouth.

Danishes, or vínarbrauð, one of the most popular items in the bakery. 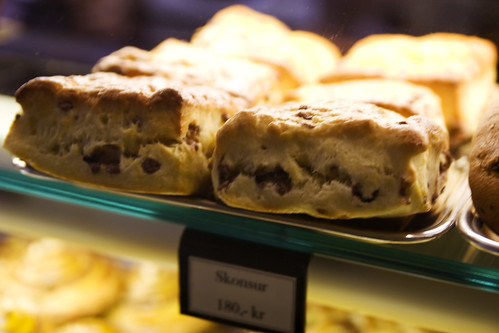 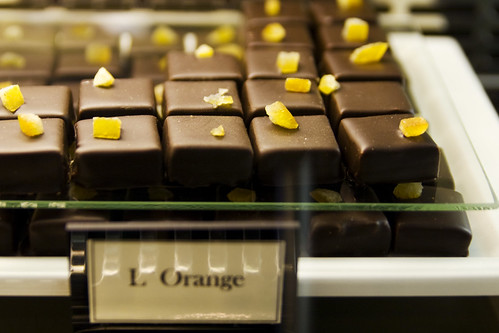 Sandholt isn't just a bakery, but a chocolatier as well. 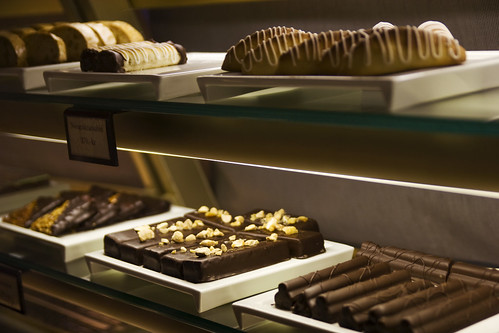 Alas, I didn't try any of their chocolate-enrobed goodies. WHAT IS WRONG WITH ME? 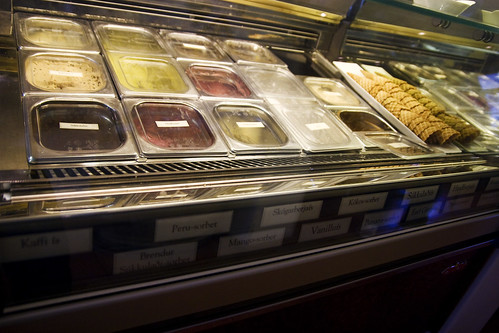 Actually, Sandholt is even more than that—it's a homemade bakery/chocolatier/ice cream shop. Are you in love yet? Because you should be. 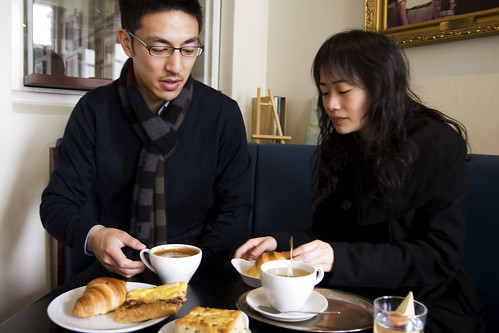 I ordered way more than Greg, Diana, and I could (or should) eat for breakfast. But that's how it goes when you want to try a bunch of things and you don't have much time to do it in. Just shove it all into one go! One bloated go. 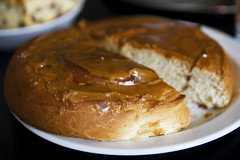 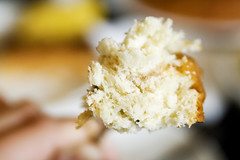 The toffee-coated bun with cinnamon-filled crevices was about as large as my head. The large size lent itself to what felt like a heavy pastry, but the texture was actually fluffier and lighter than it looked. Overall, a tasty, not overly sweet breakfast treat...best shared between four people. 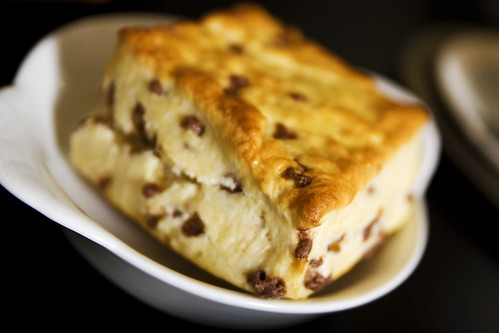 I don't recall much about the cinnamon chip scone, which probably means that it was good, just not in the "OMG, GIMME MORE" sense. It was of the tender, crumbly, very lightly sweetened sort. Maybe it would've been better if I could've smothered it with butter or clotted cream... 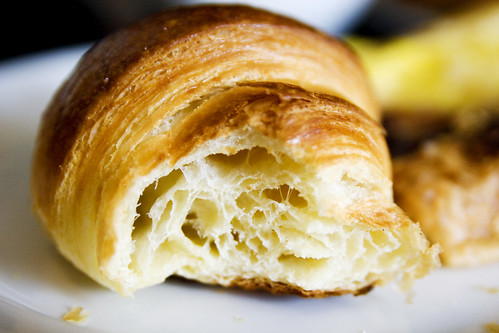 I liked the croissant, even if it lacked that initial cronch and explosion of crust shards that follows when your teeth pierce through the stack of thin buttery layers. It was crusty enough with soft, holey innards, and a slightly sweet, buttery taste. 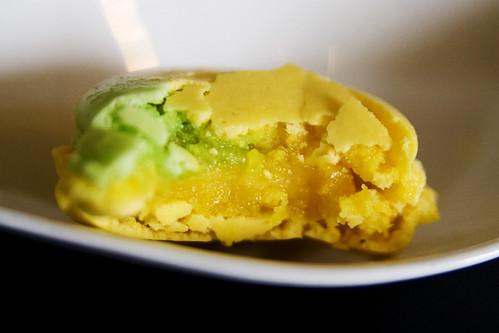 The passion fruit macaron was a bit too sweet for my tastes (that happens a lot), but for a country where I doubt many places offer macarons, they were good. Slight crust on the outside and soft on the inside. 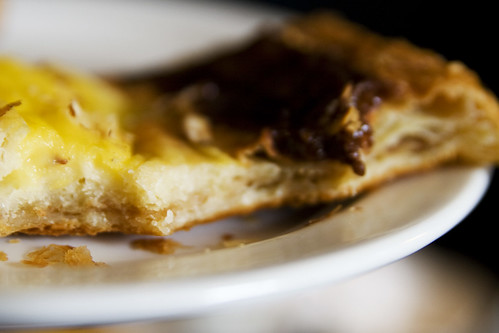 My favorite of the bunch was the Danish. Growing up, I was never fond of Danishes; American versions are generally filled with a sort of sweet cheese and/or fruity goo that doesn't appeal to me (at least, the generic ones). But Sandholt's version, which I figure is more like the kind you would find in Denmark, spared me of fruit. The thin, buttery, layered pastry was topped with custard and chocolate and—this is the best part—filled with marzipan. It's nutty custardy chocolaty buttery goodness, 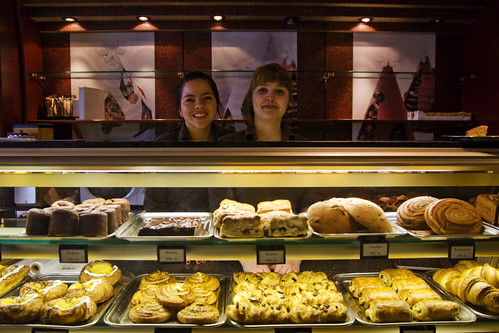 During our carb-loaded meal we talked to two incredibly sweet young women who work there, Tamara and Andrea. Neither of them is Icelandic; Tamara is from Ecuador and Andrea is from France. If you see them when you visit Sandholt, say hello! Maybe they'll let you take a look inside the kitchen like they did for us. 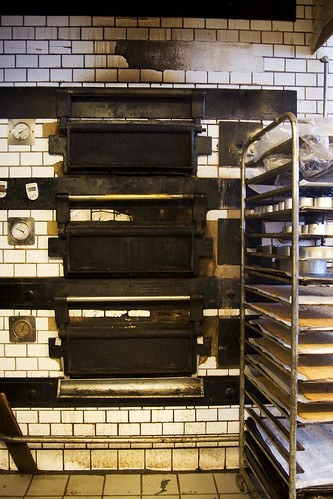 Where things get delicious.

Some super old ovens over there. 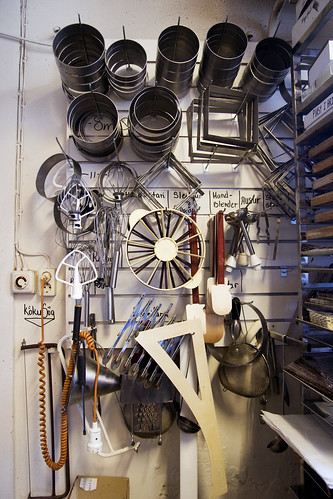 Some baking tools over there. 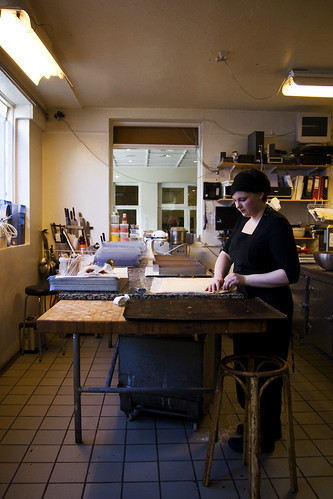 Let's give birth to some PASTRIES!

And a workstation over there. 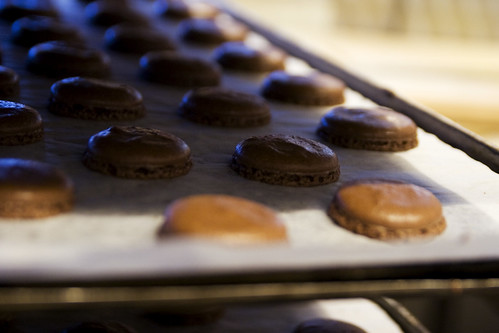 And chocolate macarons in the making!

having gone to Seoul and Reykjavik recently your pix brought back good memories. I do have to say Korean food wins over Icelandic food any day

longtime reader, first time commenter :) love your blog roboppy! it keeps me in the know regarding what to eat and, more importantly, where to it!

I guess they taste better than they sound... ;-)

What an awesome, multi-talented bakery. Those macarons look so pretty all marbled like that. What's with those enormous singular backed goods though!?

I strongly dislike marzipan, but that does sound like quite a good idea. We have the same gooey fruit danishes in England, usually just with almond flakes on if I'm not mistaken. I dunno, I never eat them.

So cool that they let you snoop around the kitchen. Such lovely people.

Oh my GOD! That's the extreme place I went on my last day there and the EXACT girl who served me! Very sweet girl!

Holy Shizznit - you're STILL in Iceland? They got some good perqs over there at Serious Eats...

E: Thanks for delurking! Not sure it will help you much to know where to get a croissant in Reykjavik buut uh YE NEVER KNOW.

aforkfulofspaghetti: I think it's a cute name! Would sound like "snoother" or something? :)

SuperChomp: I dunno why some of the pastries are freakin huuuge. Maybe you're supposed to share, or save for later? Portion control fail.

I'm not a huge fan of marzipan usually, but in pastries I'm okay with it. Like if it was stuffed into a croissant...I'd be okay with that. But a marzipan chocolate thing, less so.

Yup, your danishes sound the same! Even though you are closer to Denmark. ;)

FN: Read the first sentence (it's above the first photo).. ;)

A place thats does Ice Cream, Chocolate and Baked goods? I want one!

That place looks amazing! What a sweet find! And I just want to STICK THINGS in those lovely ovens!

ARG. Everything looks delicious... The bakery seems like a really cool place just to chill and get comfy. And eat a dozen pastries/chocolates/ice creams while you're at it. I love it!

The degree to which those pastries rival the "natural" beauty of Iceland is absurd. What an amazing trip!

Edd: That should be your next step after getting out of the banking world.. :)

Anna: Things made of dough, I hope!

Jasmine: Yeah, it was a comfy, friendly place. I wish we had one heeere. (Granted, NYC already has a lot of stuff..um, I think I need the environment of Reykjavik as well.)

Holly: They come together as one awesome package.

We went to Sandholt during our trip in May...I'm so glad you tried so many things! We only had two things, and really wanted more.

Thanks for the great coverage of Iceland - we did some of the same things and it's great to see it from another perspective. Nice photos too!!

This makes me almost cry. I used to go to this very bakery with my grandmother and we would get the "danish" which is amazing with tea. Sigh, you did such a great job with all your Iceland posts:)

Ailene: It would've been great if that whole sentence referred to just one pastry.

BenG: Glad you enjoyed it; thanks for reading!

Ulla: YAY, another Danish lover! So I tried the right thing.. :) I'm happy to bring back such good memories for you!

those macarons look so delicious! i am going to have to stop by macaron at lunch! i hope they have passion fruit =D have you been to the one on 36th and 7th?

Jen S.: I've been to that one but didn't like it that much.. :( The flour didn't seem ground finely enough and ..I dunnooo something seemed off. But I'm spoiled by Itzy Bitzy Patisserie. :)