This entry originally took place on April 19 during my trip to Iceland from the 18 to 24. At the rate I'm going, you'll be reading about Iceland for the rest of the month. HOOYEAHuh fail. Check out other posts about Iceland. 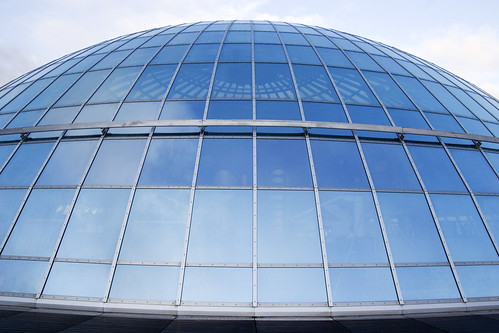 As the sky appeared to uncloudify just a smidge, Greg and I took the opportunity to visit Perlan (The Pearl) as Diana chilled out in the hotel. The Pearl is a landmark building just outside the city center made of huge ass hot water storage tanks topped with an even huger ass glass dome that together contain a museum / restaurant / observation deck / shops / occasional CD market . We were just going for the chance to look over the city, not to eat on a rotating platform or learn about the Sagas (although we probably should've done the latter). 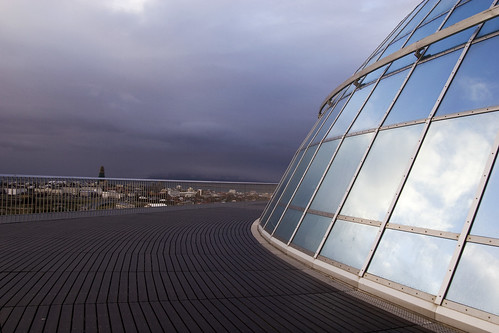 One of those...not busy days.

The deck was pretty much deserted because even though there was sunlight here and there, the weather was windy and cold with a bit of wet. When my fingers started to go numb, I realized, "...Yeah, should've brought some gloves with me." 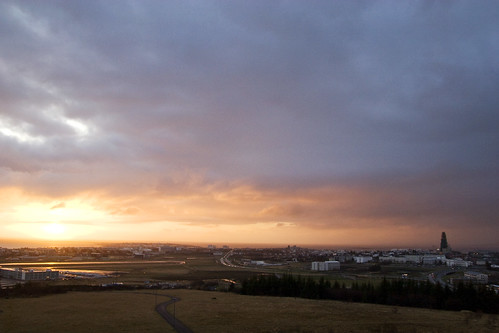 Airport to the left, city center to the right.

Greg and I waited for the sun to align with a cloudless hole. After god knows how long, it actually happened. And it was pretty cool looking.

We couldn't leave without taking a look around the gift shop, which sold the same stuff as most other souvenir shops, except for what was in the map rack. In particular, the series of maps with minimal white labels. I chose a random map, opened it up, and saw... 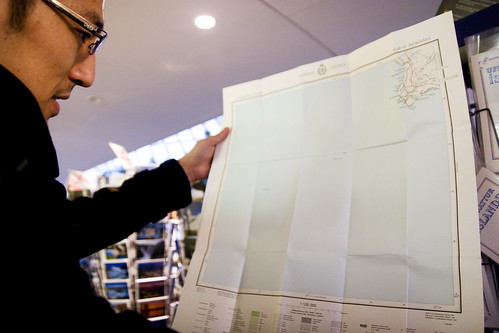 ...What the fuuuuuuuuuuuuhhhhhhggwuh? It had to be a joke. Why else would a huge map be 95 percent water with a tiny corner of land and a few barely perceptible islands? After opening another map, we realized it was part of a series of beautifully simple maps only representing a fraction of Iceland. A key on the back of each map of a grid overlaying Iceland told us which ones were the most useless (that is, mostly consisted of water), and thus most coveted. During the rest of the trip we tried to find more of these maps, but no one else seemed to sell them. You gotta get yourself to the Pearl if you want the most awesome maps ever. (And if you go, tell me because I kind of want another one.)

For dinner, we ran into the same problem as the night before: "A bunch of places are already closed because we forgot that the sun is still out at dinnertime." Our first stop, Hamborgarabullan, closed at 9 p.m., as did the neighboring Saegreifinn. We even returned to that pseudo-appealing restaurant with the fish buffet, but when we entered the doors at 10 p.m. found out they had just stopped serving food. 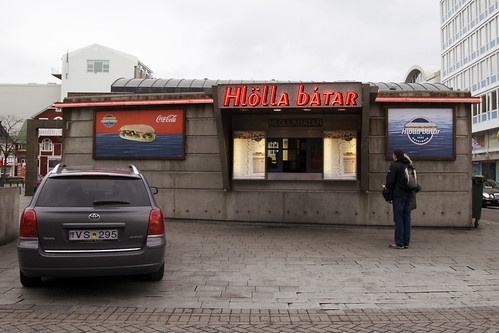 Taken earlier in the day, not at some freakishly sun-lit night.

It was for the best, or we wouldn't have ended up at Hlölla Bátar, home to delicious sub-style sandwiches. This stand in Ingólfstorg initially caught our eyes because 1) it's a neat looking stand (we think the Shake Shack looks cool, but then you go to Iceland there are a bunch of buildings with similar sleek designs) and 2) we kept saying the name Hlolla like "holla" even though the H is silent. It was pretty much impossible to pass without going, "HOOOLLAAAA"...quietly, of course. 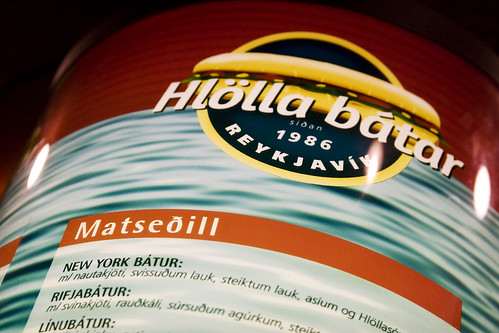 All their sandwiches are called "boats," the Icelandic name for subs. Although we initially thought it was a funny name ("Are these like...floating subs?"), there are loads of stranger ones out there. 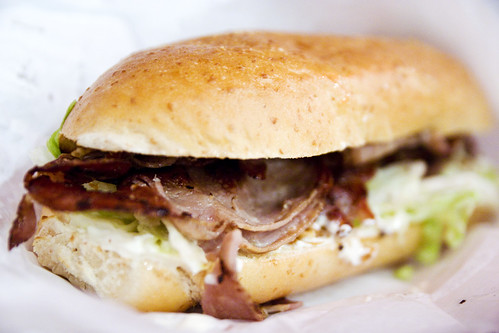 The winning sandwich of the night was the lamb boat filled with thin slices of crispy fried lamb topped with crunchy fried onions, pickles, lettuce, red cabbage, and loads of mayonnaise-based "Hlölli" sauce. You've got your multiple forms of crunchy balanced out by a splodge of creamy all tucked into a soft, mildly chewy roll. It may not be anything like the lamb sandwich from Pane Bianco, but I'll put it up there as one of the best lamb sandwich concoctions I've ever had. 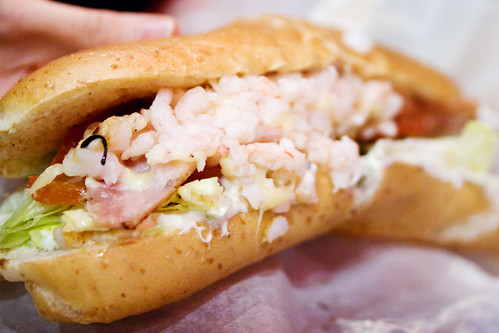 Diana got a shrimp boat. It's got...a lot of shrimp in it. 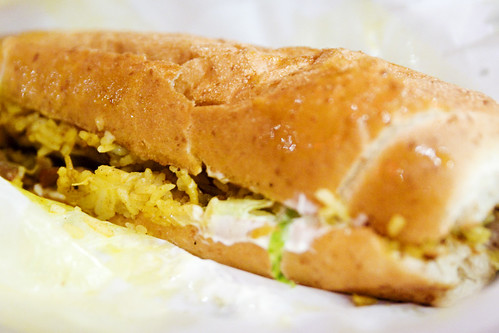 My lamb curry boat was the least successful. Methinks it was the generous layer of rice: It introduced a major soggy component to the sandwich, a soggy component with a weak curry flavor. "Soggy" isn't something you want in a sandwich. At least, not this one. A roast beef sandwich dipped in beef juice may be fine, but rice? Eh.

Aside from the sog, I have yet to believe that a carb-filled sandwich works. I'll never forget that one time I ate a yakisoba sandwich and the scar of epic fail it left on my memory as one of the few ill-conceived items from a Japanese bakery. Granted, this sandwich had more than rice in it, so I wouldn't say it was un-tasty. It just felt a bit...off. It made me wonder if anyone orders it more than once or if they just try it that first time out of curiosity, like I did.

UPDATE (5/11): It has been pointed out to me that french fries inside sandwiches = deliciousness. I must update my opinion to say that carbs in sandwiches are fine as long as they are DEEP FRIED. ;) 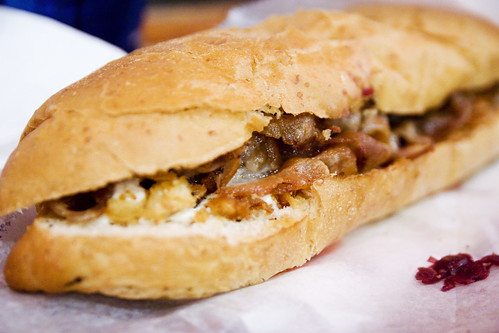 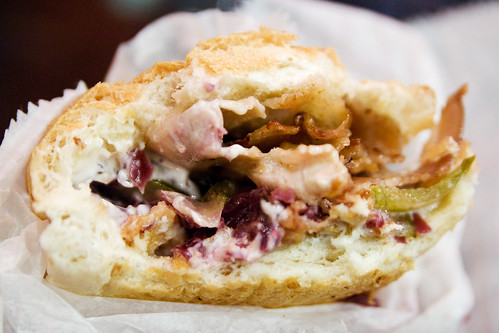 Greg liked the lamb sandwich so much that he went back for another, the rib boat filled with crispy, fairly moist pork chunks, red cabbage, pickled cucumber, fried onions, and Hlolli sauce. It's pretty much like the lamb boat, but with pork. Can't go wrong with that. 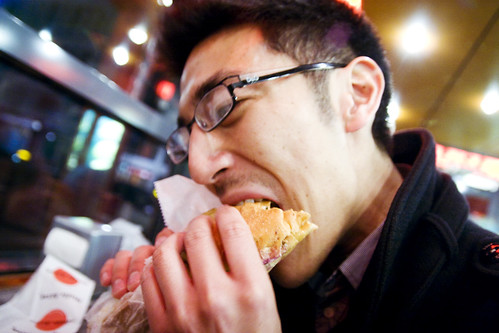 LOOK AT GREG GOOOO. He's the Destroyer of Sandwiches. And most other foods. 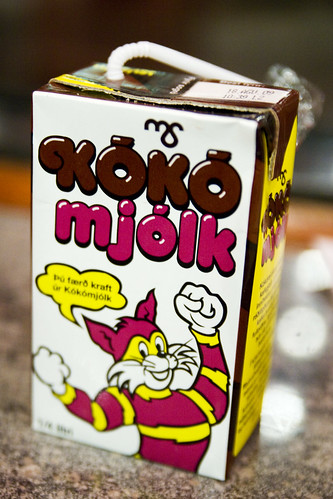 I also tried the Muscular Purple and Yellow Cat Thing-Branded Chocolate Milk, which tasted like any other chocolate milk. Not that I was expecting a chocolate milk experience of grand proportions. It marked the first time all year that I drank something out of a juicebox.

Halfway through our meal, we met three Spanish-speaking women (one from Mexico, two from Cuba) who needed some help ordering sandwiches. I was totally useless in this department, but thankfully Diana and Greg had Spanish skills. We found out that they all lived in Reykjavik without knowing much Icelandic or English. I don't think I could manage that. ...But I'm pretty wussy.

Cool. what do you think of the food portion in Iceland? I was at the Perlan as well, but I was there waaaaay before it opened up. I'm an early bird and nothing opens up early.

I'm surprised the 'boats' weren't served with wholegrain bread since I saw so much of it being served there.

Ya know, in Belgium we have something called a "mitraillette". It is a baguette sliced open, filled with fries and meat!

I want to have a pork/rib boat!

On carb-filled sandwiches: I don't know---perhaps if the carbs in question were in a totally different texture? That's why I like putting crisp french fries or potato chips in some of my sammiches. :)

Don't the French put fries in their kébab sandwiches? Carbs of the ricey variety do sound as if they'd be less satisfying in a sandwich, though.

kim: I thought portion sizes were fine...just the right size, perhaps? The boat sammihes were big!

chris: I just had to google that..."submachine gun"?! AWESOME NAME. I want one.

Mahar and Hannah: You guys are totaly correct. I love fries and tato chips in sandwiches! Or rather, crispy carbs. Only mushy carbs are faily.

I need a place like this near to my office, all I have is a crappy supermarket, mcdonalds or subway. You can be sure I take lunch with me! Loving the map always love some redundancy

wow those boats look delicious!!! not your average sandwiches either. have you tried baoguette on lexington ave between 25th & 26th?

Shiny glass dome is... shiny. Kudos for waiting for the lighting to present itself for your photograph. I think cold and wet would have deterred me.

Those maps would make great wallpaper....

I like yakisoba-pan. Although, you say sandwich, and I was led to believe most were in a sub type roll. *shrug* We Brits would certainly vouch for the chip butty :)

Edd: I'd like this near my office too. We have a McD a block away..and a supermarket..surprisingly perhaps, no Subway! (or maybe there is one and I didn't notice.)

Jen S: Yup, been there! Here's the Serious Eats review.

SuperChomp: Maybe it depends what the definition of sub bread is. To me, sub bread is the fat Italian type with a semi crusty exterior. The yakisoba pan I had was in a small, soft roll, although if it were any more hearty the noodles probably would've gotten all squished.

hey robin. i somehow found your blog and i loved it so much that i have been reading all of your older entries back to 2005. your love of little dumps has made me want to eat all that i can find.

Nooo, I love yakisoba-pan. Might be because I love Japanese mayo. I still can't stomach American mayo, 23 years after emigrating from Japan... lol

I had to follow-up comment because I just read what "merilee" said: "your love of little dumps." It is so wrong, yet so right to your faithful readers.

That phrase is so going to be stuck in my head today. "Little dumps.."

Oh. I think a sub (over here? In ol' Britland) is a soft white roll. Like a large hotdog bun.

(On second thoughts, I think it just refers to a sandwich-like arrangement of a long shaped bread. That looks like a submarine. I imagine, the word "sub" has no bearing on the type of bread. Agh, word count!)

And, yes, as "m" points out, Japanese mayo is to die for. Kewpie for the mo'fo'ing WIN.

Merilee: OH YEAH LITTLE DUMPS ARE THE BEST!! Thanks for reading!

M: I don't think my yakisoba pan was blessed with much mayo..:( That could explain the sad? Not that it would've saved it texture-wise, hehe. I do like tonkatsu sauce, but usually on tonkatsu. :)

SuperChomp: To me the definition of a sub also has to do with size. I see them as..ginormous. :D But that doesn't have to be a case. There can be little subs? I've never seen a particularly big Japanese sandwich, but the Italian sandwiches I had growing up were like 4 servings in one. ...eeeeuh.

I wanna go to Iceland! Those sandwiches look amazing.

Did you go to NonnaBitti? It's BETTER than HOLLA

Angela: Sadly no; I didn't hear about it until I came back from Iceland!

So agree on the lamb boat. We stopped there in 2004 and are still talking about its nearly perfect combination of so many taste sensations.

Am I ever happy to have stumbled on this blog. I'm going to spend about 28 hours in Iceland this September en route to Europe and it was fabulous to read descriptions of these sandwiches and to see the pictures. I like to do a bit of research before I travel.

I'm looking forward to reading your other entries as well and finding out where else you've traveled. If your travels ever take you to Halifax, Nova Scotia you should check out the Westcliffe Diner for smaller, easy to miss but not to missed dining experiences.

Here is a shorten link (via bit.ly) to the Trip Advisor page with reviews. I promise it's not spam or inappropriate in anyway. The real URL is simply too long.