I don't choose who I hang out with based on gender, but when it turns out that everyone in your group has the potential to turn egg and sperm into a bundle of functioning organs that may or may not live up to your unfulfilled dreams, you might end up with something called "Girls' Night." While it doesn't have to be different from "Gender-Neutral Night," I'm not sure a mixed group would be as likely to try on a bunch of women's hats and take photos of themselves wearing said hats and lounging about in a living room while talking about ex-boyfriends. Or maybe they would; I don't know. 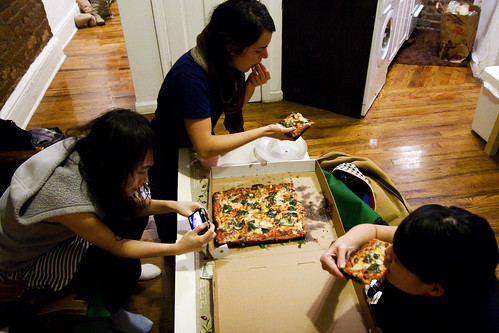 Eating pizza is certainly gender-neutral. After seeing Fuerza Bruta (more on that later), Kathy, Diana, Lee Anne, and I hung out at Kathy's East Village apartment where we ravenously wolfed down a whole Sicilian pie from Artichoke. It initially looked easy to plow through—we were pretty damn hungry after waiting until 10:30 p.m. to eat dinner—but we had underestimated the pizza's heft. 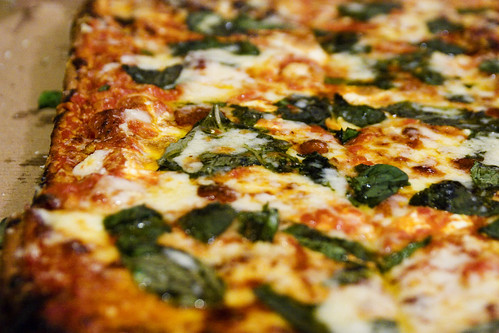 Getting through the first slice—an inch-ish-thick slab of bread slathered in sweet tomato sauce and swathed in mozzarella—was no problem. It was about halfway through the second slice when I grabbed my belly and thought, "Uhh.....crap, I'm full. But I may as well finish." (It's thoughts like that that ensure I will never lose weight.) And we did. Eat it all. Every last bit of tomato sauce-infused, chewy, crispy-edged crust (maybe a little too carbonized in some parts), and every square inch of basil-laden cheese goo. I'd happily do it again. 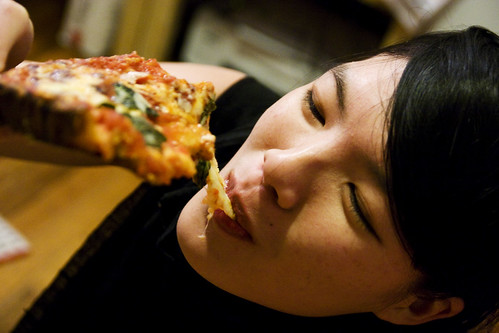 I'd hope that Kathy feels the same. She was the one who ordered the pizza (the rest of us had never eaten at Artichoke before), so it's safe to say it's a favorite of hers.

See, we did the hat thing. Photo by Kathy.

I rarely play anything resembling "dress-up," but if I could pick someone's closet to raid, it would be Kathy's. Not that I could fit into any of Kathy's clothing. But as my head is apparently normal-sized, I can do hats. Kathy provided the hats; I went for the beret. The most "ooh yes, I would give up my firstborn for that one" hat was easily the black pointy one Lee Anne is wearing in the photo, made by Barbara Feinman. As much as I would like to own a hat like that, it probably cost more than any single item in my closet. It will have to hold off until the day I decide I'd rather spend money on a hat than food—that day being "probably never."

I spent the rest of the night testing how well I could breathe with a giant stuffed teddy bear blocking my airways (pretty well, as plush teddy bears are porous creatures) while the others participated in much girl talk. 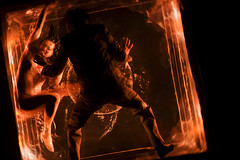 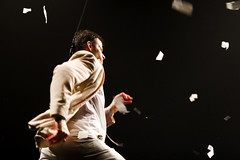 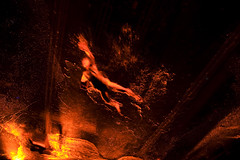 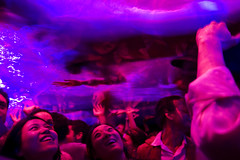 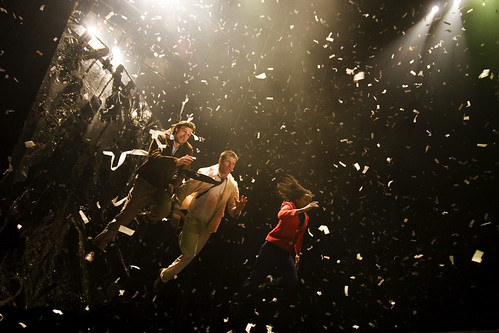 Our night had started with Fuerza Bruta, an interactive dance-ish show...type thing. Crappy description, but it's not easy to describe in one sentence (it's probably easier if you watch the trailer). Although I've seen innumerable advertisements for it in subway stations, I wouldn't have thought of going if Diana hadn't been so insistent that it was awesome and worth paying at least $40 to see (the original ticket price is $75; we used this online discount). Indeed, it was worth $40 and, like Diana, I'd want to see it again. There's like...people jumping off stuff, jumping through stuff, running around the walls, smashing styrofoam boards on each others' heads, "swimming" in a floating clear pool, blah blah, you know how it is. 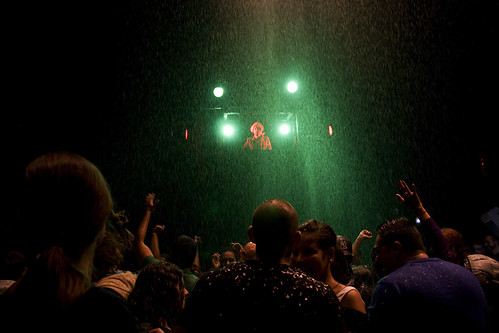 If you get the chance I'd suggest you check it out, although my tips would be to wait until the spring when you're not wearing a heavy coat, and if possible leave all your stuff elsewhere or else you'll have to check it in or carry it with you throughout the show. There are no seats—you stand the whole time except for when you're being shuffled around, lest you want to be crushed by moving platforms. Another reason for the spring thing is that it's likely you'll be sprayed at with a water hose during the show or get caught in a final shower; being covered in damp clothing before walking into sub-freezing temperatures is not awesome. But the part where you dance wildly under the rain is awesome.

the photo with the bear is maybe the cutest one ever.

I'm not sure a mixed group would be as likely to try on a bunch of women's hats and take photos of themselves wearing said hats and lounging about in a living room while talking about ex-boyfriends. Or maybe they would; I don't know.
If your mixed group is women and gay men, I'm sure they would. :) That pizza looks DIVINE.

Artichoke's crab pizza is also divine, as is their signature artichoke slice. unfortunately both make you feel as though your intestines have ruptured.

I like Artichoke's pizza. Except I find it quite heavy with the grease a bit.

Anyhoo, how can you (or anyone) not get their camera wet at Fuerza Bruta? Looks fun and awesome though.

"When ever I see a bunch of girls talking with each other I always have the same fantasy.

funny hats and ex-boyfriends? sounds like one of my nights in. although throw in some skirts, dresses, and a few pairs of super-tight jeans.

Hahaha this is so funny, I can totally relate. My posse only has like three girls, so every now and then, we're like, "Eff you guys, we're having a ladies night!!!" And that usually results in us doing the only two authentically "girly" things we like to do: drink wine, and talk about the boys. Ah, the girls night...

DrRandy: Ah, the gay man would mess things up a bit because I'd probably be distracted by his hotness. But I'm basing that on the few gay friends I have..

bobmcsmith: I'd rather avoid the "ruptured intestines" feeling.

SuperChomp: The show is originally from Argentina so I feel like they would tour around!

Tina: I protected my camera with my BODYYY! ...It probably got a little wet but I soaked up most of it.

redrhino: What the..HECK! Haha. I forgot how awesome Scrubs was. I haven't watched it in ages.

Tristan: STOP OUT-GIRLING ME! I can still have babies; you can't. HAHA HAHAH wait that's not very awesome.

Kirby: I would include "eat cupcakes."

I would happily consume another ten bagazillion Sicilian pie with youuuuu :D

Next time we have to either check in all our stuff, or go during summer like you said. That we can crazy dance with the water. And then. Bagazillion Sicilian pies.

would you say that the artichoke pie is equal to difara's? they look and seem to be very close. still worth a trip to difara's?

Summer summer summer! I would go again in a HEARTBEAT. And moar Sicilian PIE!

(And momo cookies, like Kathy said! Jeebus, I can't wait to move to the east coast [I will get so fat].) :D

Haha - looks like so much fun! And that pizza definitely puts the crappy pizza my friends and I used to order on hang out nights to shame.

Gah! I just saw Fuerza Bruta and LOVED it! I'd definitely go back next time, now that I know where to stand so I can be in the full on dance party at the end. Also, you know that sometimes they have "Boys Night" where it's boys in the pool?? Sounds fab!

Lee Anne: Manatee likes to hug the fat ones. Like me!

Erin: I have heard about BOYS NIGHT, which Kathy was very interested in attending...(aheeem).. ;) I am less drawn to the well toned men dancing and sloshing about. How silly of meee.

did you ever get that humongous fuzzy hat from village scandal???? you can hug that too, like a bear!!

heartkorean: I haven't had the actual artichoke pizza. Seems to be a love/hate thing? I will try sometime, hopefully.

This place is gorgeous I have a friend that celebrate his birthday in there and it was amazing everything was perfect.