This entry originally took place on January 31. Will I ever catch up to present day activities? PROBABLY NOT. Heeehhhhh [curls into a little ball of failure]

One glorious evening while watching episodes of Ren & Stimpy (come on, guys, one of the best shows ever...don't back away from the computer now) with Ezra and Chris and sharing a few "What in the...jesus..huh?"-laced laughs, I realized it would be even more fun to revel in the brilliance of the show's exceptionally gross and WTF-inducing humor with a couch full of my friends. And thus REN & STIMPY MARATHON 2009 was born.

While the responses were mostly positive, there were a few non-believers. To better accommodate the Ren & Stimpy haterz, I turned the get-together into REN & STIMPY MARATHON AND DUMPLING-MAKING PARTY 2009 which, over the course of the night, ended up turning into DUMPLING-MAKING PARTY WITH REN & STIMPY PLAYING IN THE BACKGROUND 2009. It was probably for the best that no one got to see me guffaw like a psychotic 5-year old in response to Ren and Stimpy's attempts to sell rubber nipples. 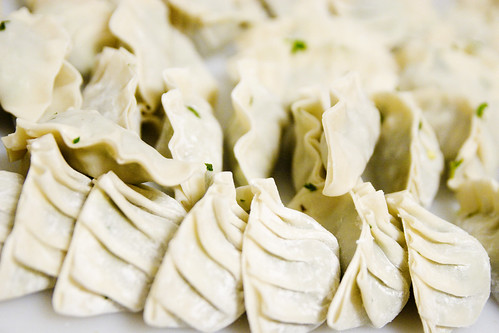 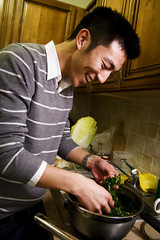 I used Michele's recipe for pork and cabbage dumplings and edamame, kale, and cilantro dumplings with good results, if you ignore my incompetence in the kitchen. Michele went to culinary school; if you could see me as I wrestled with two pounds of monstrous, hearty kale leaves, you would know right away that I obviously did not.

Preparing the kale was a pain in the ass—I hadn't really planned how I would manage the massive pile of green ribbons I would inevitably end up with. Some part of me thought it would be less daunting after cooking down a bit, but...no, not really, as they're quite good at retaining intense fibrosity. Of course, doubling the recipe for the benefit of my vegetarian/vegan friends was what made the green matter doubly unmanageable. I ultimately ended up with at least 50 dumplings too many. (The meat and vegetable dumplings combined numbered around 150.)

In her recipe, Michele says you can purée the edamame, but, like her, I prefer the chunky texture of the whole beans. They add another layer of texture to what could otherwise be a standard mush, besides that there's something satisfying about rupturing whole plump, nubby edamame beans with your teeth. You know, the popping sensation. ...Yes. We also mixed in finely chopped mushrooms for extra heft/flavor/texture/etc.

We forgot to put the cabbage into the meat filling, but as they were still mixed with scallions for some sort of vegetable matter to break up the porkiness, they seemed to come out fine. 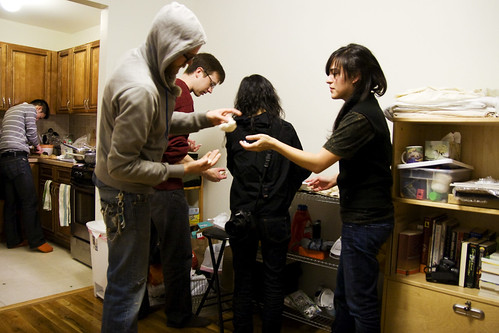 Seasoned dumpling makers Lee Anne and Diana helped teach the noobs how to wrap the dumplings. Admittedly, the prettiest ones were probably made by Lee Anne and Diana, but they all came out well. I mean, I LOVE EVERY DUMPLING EQUALLY, NO MATTER HOW PRETTY/DEFORMED IT IS. 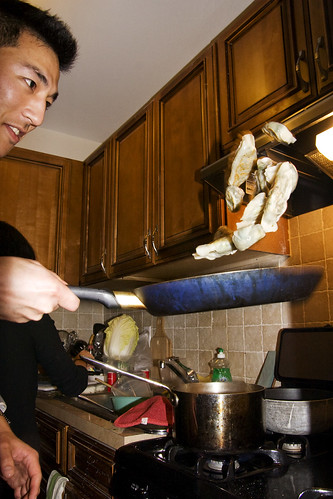 Greg took the role of dumpling cook. I failed to get a photo of the boiled specimens (too busy making sure nothing was going to hell), but got a nice shot of the dumplings mid-pan-frying-flip. I probably shouldn't tell you that it took more than five tries for me to get this shot, resulting in some dumplings falling by the wayside, resulting in me picking them of the questionably clean floor and eating them, and not even because I was following the five-second rule, but because it's my kitchen and I don't really care and...I'm still alive so it appears that my kitchen floor is not coated in toxic substances. 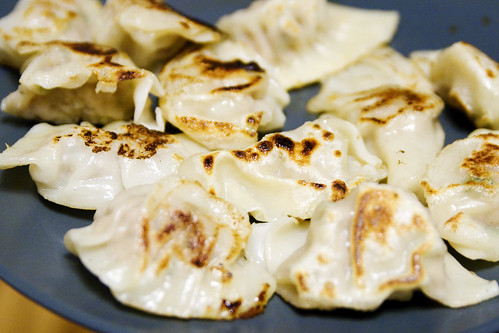 The dumplings came out nicely browned with patches of crisp. I mentally awarded Greg a shiny gold star. 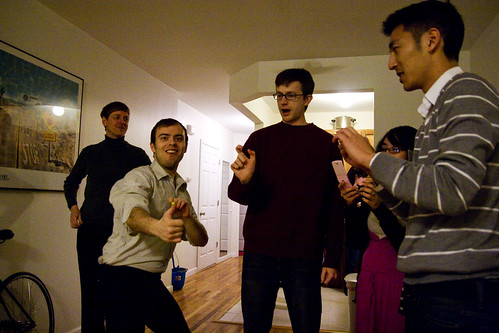 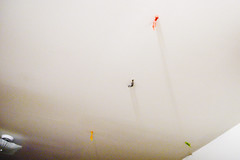 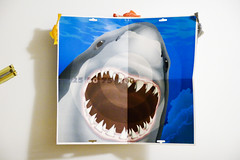 The party was not all dumplings and mild Ren & Stimpy watching. We also flung sticky fish-shaped goo things at a target featuring an illustration of a shark (provided by Colin)...or the ceiling. WE. KNOW. HOW. TO. PARTY. OK. 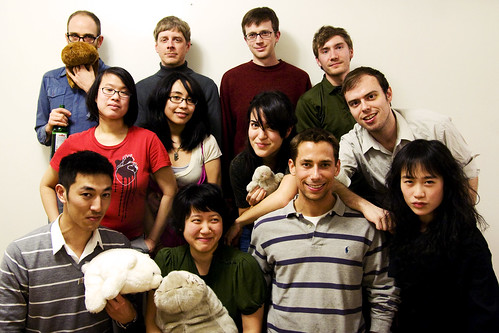 But even better than "flinging goo at stuff" was taking group portraits with the help of a tripod and Diana's art direction. The first take was supposed to be the "serious" shot, but I just couldn't do it. You can tell from the expression on my face that I was about 0.3 seconds away from exploding with laughter. 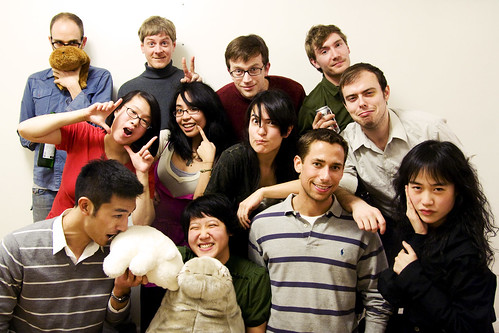 And then there was the "silly" shot. Apparently, silly for Greg is "eat Polar Bear's butt." 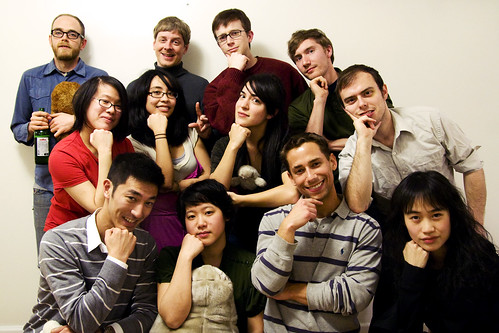 Put your hand under your chin, guys.

The third was the "high school class portrait" shot. It worked out quite nicely with Ken unexpectedly taking the role of "alcoholic teacher who wants to kill himself."

It didn't stop there. There were also these jumping shots: 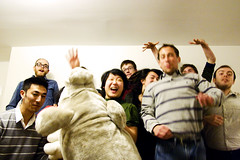 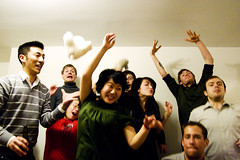 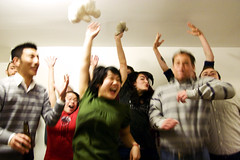 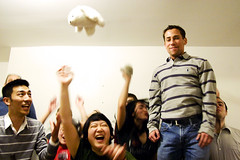 And these couch shots: 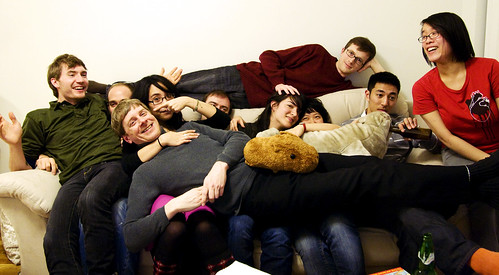 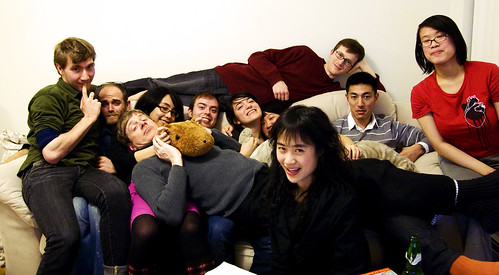 I should probably identify everyone. Chris is across the top and Diana is in the front. Left to right on the couch: Tristan, Ken, John, Claire, Colin, Lee Anne, my tiny head, Greg, and Amy. Doug had unfortunately left by the time this photo was taken. Also, note the drunk manatee in the top photo. Heeeh.

The rest of the night was occupied by watching YouTube videos on Chris's HD TV.

What will the next food + TV party be? I'm not sure, but I'm open to suggestions.

Thank you to all my friends who were really helpful and cleaned up most of the stuff for me and stayed at my apartment until the wee hours of the night and blahdeeblah awesome moose power, yaaay it's time to go to bed now.

Wow. The two most awesome things in the world combined into one event.

I love Ren and Stimpy. How could you not--it's the predecessor of The Simpsons, Family Guy and South Park! The original gross humor.

And dumplings, well their awesomeness goes without saying.

The stuffed polar bear in the picture is also very 90's :) I totally had one in pink!

Wow. How much do I wish I could be your friend? I want dumplings and old Nickelodeon shows! I promise I'd laugh at everything Ren says, just for you.

Okay, I do that anyway.

Oh man, that is the best party I can possibly think of right now. I love your blog so much. :)

Omg diana looks like she's going to kill someone in every picture.

I should totally do a dumpling party. I will steal your ideas *laughs maniacally* If only my friends weren't everywhere but our hometown :(

OMG! Class picture for the win!

Chrissy: Oh man I love my Snuffles so much. Except I just call him Polar Bear, which is probably..pretty boring.

Ren and Stimpy is totally teh awesome. I can understand not liking it, but then that overlooks the great animation and ..awkward timing...and awkward everything.

Louisa: You can be mah friiiend, now you just have to come to Bed Stuy. ;)

Carolanne: Thanks! I'm glad you're in tune with ROBOPPY PARTY STYLE.

SuperChomp: Dumpling parties are so fun!!!@!#@!# You should be able to round up some dumpling loving peeps...yess?

Claire: I'm planning to get it printed out so I can lovingly hang it on my wall.

Ren and Stimpy!! They are the best! I keep looking for them over here on French tv, but no luck yet. I have resorted (yes, I am gonna admit this) to watching Pocoyo cartoons every morning to help learn French. Pocoyo! It is targeted to 3 year-olds!

Hey, it's Colin! My boyfriend and I are staying with him for a few days in April because he's a rad friend. The party sounds like lots of fun!

Extra dumplings? I would have been entirely willing to take those off your hands.

Damn, now I am inspired to throw a dumpling party, west coast style!

Girl, nothing says "Happy happy, joy joy" like dumplings, old school Nickelodeon cartoons, stuffed animals, and jumping pics. For some reason, my cousin and I used to alternate between watching "Ren and Stimpy" and "Salute Your Shorts" -- with things like "Beavis and Butt-Head" and lots of anime. Ahh, memories.
- S

PS: I LOVE YOUR MANATEE.

You and your friends are too adorable.

Ren: See this button?
DON'T TOUCH IT! IT'S THE HISTORY ERASER BUTTON, YOU FOOL!

*Ren eating a bar of soap*

Oh! My beloved ice-cream bar! How I love to lick your creamy centre.

And your oh, so nutty chocolate covering. You're not like the others. You like the same things I do; Wax paper. Boiled football leather. Dog breath! We're not hitchiking anymore, we're riding!

How do I get invited to your next cooking party / potluck / pig out bash? I must be invited!!

Ahhh! I loved Ren & Stimpy as a kid, and my eight-year-old self used to prance around singing renditions of "Happy Happy Joy Joy" in front of my mom (no doubt, she thought something was the matter with me, but hey, she cracked a smile).

Dumplings are so fun to make. =]

I know you've probably heard this millions of times, but GOD I LOVE YOUR BLOG.

Home made dumplings seriously are the best, but unlike yours, I stuff my dumplings SO full that sometimes the skin splits...and then I have to use 2 skins and it looks like funk. :P

Hey Robyn! I love reading your blog and following your foodie escapades. It makes me miss the city! Unfortunately, Austin is devoid of food carts...

I would love to intern at Serious Eats this summer. How can I apply?

FN: I wonder how French people take to R&S...or how it sounds in French? That might be awesome.

Anna: Yeah, Colin is awesome! He entertained us with many youtube videos...yes.

Hannah: I just finished off the last of them two nights ago. No moooar...wah.

Steph: I don't know why I grew attached to R&S but didn't watch many other shows. I didn't have cable growing up, so no MTV or Nickelodeon. I had to borrow R&S videos from the store or something. :O

Manda: Thanks! It was fantastic. And they are adorable.

Graeme: HAHAHA OH YES what a good episode that was.

Chrissy: Send me a(nother) giant plush manatee and you're IN FOR LIFE!!

Sarah: My mom always thinks there's something the matter with me.

Michelle: Thanks! I like your use of all caps. Approoooved.

I am afraid of over stuffing dumplings so that they explode or burst, as you say. Do not want double skins!

Maryuan: Thanks for reading! WE LOVE INTERRRNS! There's more info in the Serious Eats FAQ. :]

THIS WAS SO FUN OMG I WANNA DO IT AGAINNNNN

I love dumplings! I keep trying to drag my friends together for a theme food night, like that stupid show on TBS where they paired food and a film.

I've never made homemade dumplings, but one of my favourite memories was an afternoon spent making homemade egg rolls with a friend's family.