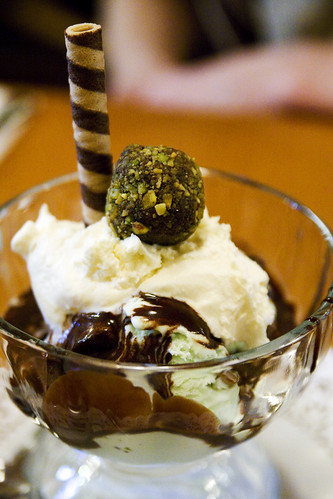 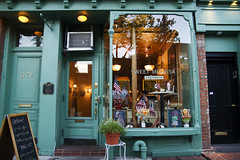 The pistachio truffle sundae from Sweet Melissa Cremerie sounded promising, but knowing that few pistachio ice creams use the nut to its highest potential, I kept my expectations low. Not even Otto gets it right and I consider their gelato to be the best in the city (the olive oil gelato cancels out all wrongs). Unfortunately, Sweet Melissa's ice cream was boring and low on pistachio flavor. The texture was smooth and creamy and there were crunchy pistachio bits in every other bite, but that doesn't really make up for "blah" pistachio ice cream.

I can't really blame it on Sweet Melissa though since they don't make their own ice cream—they make their sundaes with Bassetts ice cream. Still, for about $10 I'd want the ice cream the be the "oh my god, yes" part of the sundae, not the homemade Valrhona hot fudge, freshly whipped cream, pistachio truffle, or flute cookie. None of those extras made much of an impression on me, but I could see how they factored into the price. 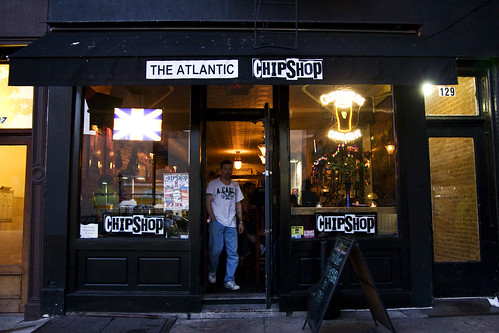 And then John and I went to Chip Shop to actually eat dinner...a dinner of fried fish...after dessert. 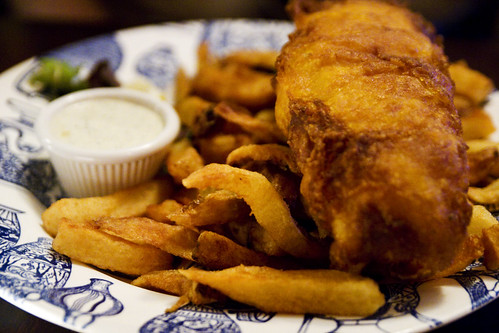 We split an order of battered cod and chips. It's huge. It's crispy. It's flaky. It's tender. It's awesome. Especially with tartar sauce. I don't eat fish and chips very often to know whether or not it's "the best," but it's one of the best I've ever eaten (the fish at least; the chips were alright) And it feeds two people, somewhat, after they've eaten a sundae. 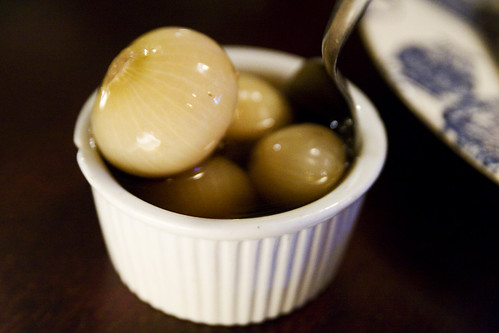 We also got pickled onions. I was curious. I don't do well with raw onions (my stomach reacts to them with gurgles and burning), but pickled are apparently okay. I think they'd be better sliced up, although I guess that's what the knife is for.

Mmhmm Don and I totally felt the same about the pistachio sundae when we had it the following weekend. It pretty and decent in size...but pretty boring and totally not worth $10. I'm acutally curious about the brioche bread pudding - now that looked tasty! ^_^

Heh, it's funny that they used Valrhona. I hate it when the fudge sauce outweighs the ice cream, though.

have you tried movenpick pistachio ice cream? its an overpriced chain i discovered in taiwan.
ive never had better pistachio in ice cream form.

Hmm, that sundae sure does look amazing though. The fudge, at least, must have been delicious! =)

AHHH!! You make me miss London and the fish and chips shop I went to the last time I was there...like several years ago!!! :) I remember it was the one of the very best fish and chips I'd ever eaten...well..duh, it was in London after all. I forget the name but I am sure if I could head back there, I'd remember...

I hear there is an authentic one in the LES/ABC side of Manhattan though. I remember the name was a pun or something...

Oh. Assault & Battery or something. I keep saying I'll try it but I never get a chance to. We end up at the places close to work and end up drinking and eating there instead...

ha...i forgot to write it the way the shop writes it - A Salt and Battery. :)

Yea... Sweet Melissa's scare me with their prices. It seems like everything is expensive there! Can you taste the difference between different types of fried fish? Because no matter what fish they use, it almost always taste the same to me.. unless they fry salmon.. then yes but that's just too easy.

(Why does your site refuse to remember me? Dangit...)

Mmm... how thick was the batter on the fried fish? I'm very picky about this point... I have noticed that restaurants tend to get this wrong while fast food joints *wince* (which I do NOT go to anymore for a ton of reasons!) do alright... I hate paying $15 for fried fish that would have been better at Long John Silva's or whatever those places are called!

Mmm. I do believe that I could live off of that sundae and those fries for about a month before I tired of them. Or before I fell ill with scurvy.
- S

Cut up a pickled onion? Heaven forbid! As someone living on the coast in the UK near many a chippy may I implore you to think again!

Pickled onions hold two main experiences:
1. Trying to spear one out the massive jar that they come in worth your fork, a deceptively difficult task
2. Ending up with a massive one that you have to stuff in your face whole, sucking all the vinegary goodness out of it until your eyes go crossed

Christina: Sometimes I eat dessert before dessert BEFORE dessert!

Sera: I've never had Movenpick, but I heard it's good. The best pistachio ice cream (er..gelato!) is in Italy though! ;)

Laryssa: There should've been more fudge.. !

Yuizaki: I've passed A Salt and Battery a bunch of times but never tried it. As for why I'd go out to Brooklyn for Chip Shop, I dunno! I should check it out..

Danny: I probably can't tell the difference between the fish!...unless I eat them side by side. Which I haven't gotten to do. Hmm, maybe I need to perform an experiment.

Yvo: I think it was...medium? Haha. It wasn't too thick, or thin. Maybe medium thick. Not sure if that helps you at all (probably not). The fish part was also thick though.

Steph: Just get some vitamin C supplements. ALL GOOD!

Gillian: Ahh, I gotta stuff it into my face whole? ;_; Can I be a wimp and cut up my onion? Hehe.

Darn, and that photo of the pistachio sundae looks so pretty. Too bad it's not so great.

I am not usually a major fish fan, but I do love me some fish and chips. I grew up in Australia, and once or twice a month our family would get a big bundle of fish n' chips wrapped in paper for dinner. I do miss those days.

It's a delicious...I mean, vicious cycle.

The fish looks very good to me, but I'm in favour of pretty much anything that's fried, which reminds me: it's been a while since our last Fried Night (tm). Used to have those once a month.

Yvo: You don't happen to have a recipe to the perfect fried fish batter, do you?

OMG. That fish looks so crunchy! I wish there was a cross section to show how meaty and moist the fish was! MmMmm fried fish...

Jenni: I wish I had an Australian childhood of fish and chips to reflect upon! ;) I definitely haven't eaten much fish and chips in my day. The most fried fish I ate was in the form of...filet o fish from McDonald's.

Sormuijai: It was too dark for me to take one this time, but I have a pic from my dinner at the other Chip Shop: Nut ice creams are sometimes the hardest flavors to get right, but the flavors don't always translate when the nuts are ground up and cold. Especially with something like pistachio, which lives in a parallel flavor universe because we all grew up with this weird green creation known as "pistachio ice creaam." I like your food writing. I have a blog, too, at www.fooditude.com. I'd love to know what you think.

Every time I hit up Arlecchino for pistachio gelato, I think of you. ^_^

(I took Poonam and Danial last week! We discovered, though, that the pistachio by itself is too intense [for mere mortals].)

Mrarrarar. The one recent foray I made into NYC for food was Alta and they had this olive oil gelato with black mint and sea salt and SOMETHING ELSE I CAN'T REMEMBER... I was all excited to tell you. Where is my brain?!!??!

Jeffrey: Italy seems to have a knack for making the most delicious frozen nut-flavored delights. What magic do they have? WHAT MAGIIICCC.

Lee Anne: YAAY! I feel speshul.. :] And man, Poonam and Danial need to increase their pistachio tolerance! It's fuuun!

I love your reviews! Keep up the good work. :) I have food review site myself and hope one day to be as good as you are! One can dream...

I love fried fish! I especially love eating fried fish before or after eating some form of high sugar food. They mix extremely well. I don't know why...it couldn't be the high fat content at all...:)

i love fish and chips! (thats why im fat). also, for the best gelato just go to Rome. Try the marron glace, ciocolato and all the fruit flavors at Ciampini (NOT Vitti) in the piazza at the end of via frattina. If you're ever in Rome, its the one with the Bottega store. You'll thank me.

I was uninspired by the fish and chips at chip shop. The fact that they serve it with tartar sauce should tip you off. A Salt & Battery is better but not amazing either. Nothing in NY that I've tried is that good. (note: I grew up in England)

Tony: Is tartar sauce an American thing? Or just a fish and chips no-no? I haven't been to A Salt and Battery but I guess there isn't much point in going..hm.