[Introductory note: I DUNNO WHAT HAPPENED TO THIS ENTRY BUT IT KEPT GOING AND THEN IT DIDN'T GO ANYWHERE, sorry.] 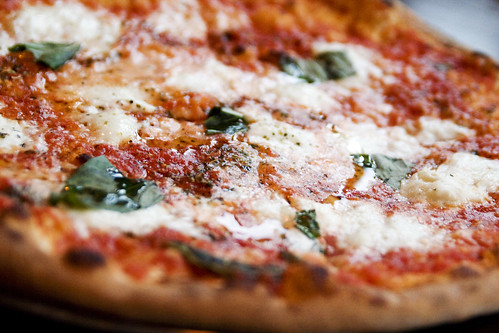 I'm starting with this photo of the Bufalina D.O.C from Toby's Public House because it's pretty. With the shimmering oil splodges. And the plops of buffalo mozzarella. And the flecks of basil. It takes me back...way back...to last Tuesday when I ate dinner with Nick. 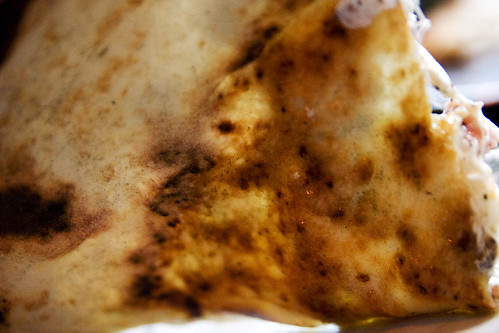 There's the upskirt. What does it tell you? I don't know; if I did, I'd write on Slice. While the crust was slightly chewy and crisp in certain areas, it's main quality that stuck out to me was the thinness. Very thin. Like something that was thin to begin with until a hippo (and only a hippo) sat on it and made it even thinner. As Adam said, the crust exhibited tip sag. Tip sag. I bolded it because it's fun to say. Heh. It amuses me more than it should. Without the term tip sag, I'd just say "the crust was floppy towards the center." But no more...no more. 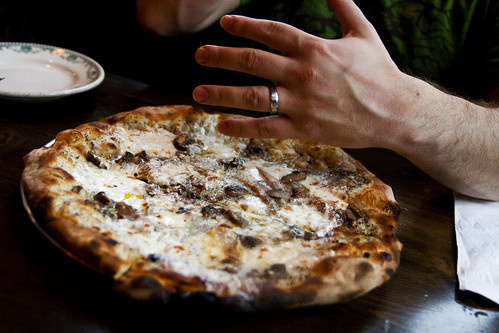 That's Nick obstructing the pizza with his newly ringed finger and the incalculable amounts of love and happiness it symbolizes. What a show off. (Seriously though, congrats to newlyweds Nick and Janet!) 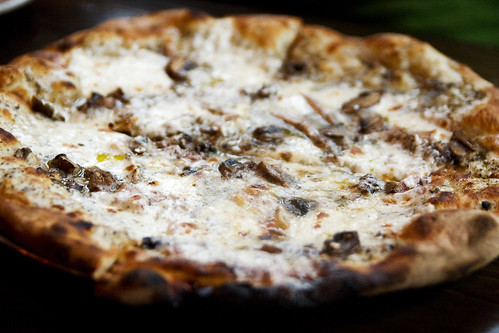 We also shared the Tartufata topped with black truffle cream sauce, house-baked Italian ham, ricotta, mozzarella, mushrooms, and truffle oil. The scent of truffle is a weird one—sometimes it reminds me of feet while other times (most times, hopefully) it's mouthwateringly earthy, like shoving my face into a mount of dirt and moss. Not that I've ever done that before—I'm just guessing. Thankfully, this was the mouthwatering kind of shroomy scent and taste. Still intensely tip saggy though. 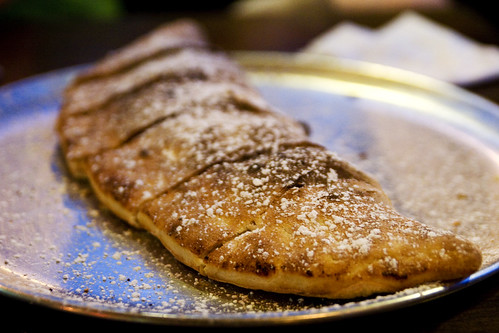 And for the grand finale, we shared the Nutella ricotta calzone. I first heard about this beautiful combination of dough, cheese, and chocolate hazelnut peanut oil spread from Erin. She made it sound like a monster of a dessert, but Nick and I didn't have that much trouble polishing it off. Because he ate more of it than I did.

While it did taste good—I don't know how a warm, soft dough pocket filled with fluffy ricotta and gooey Nutella could suck (although the visual appeal was low, which is why I don't have a photo of the innards)—it wasn't a revelatory experience worth going out of your way for. If I went again, I'd rather share another pizza instead of order a calzone. Surprisingly, it wasn't as sweet as I was expecting, I suppose because the ricotta and unsweetened outer bread cut the sugar and richness of the Nutella. It's pretty balanced in that way; just bread and Nutella wouldn't be right, nor would Nutella and ricotta.

Nick was nice enough to drive me home. I probably could've used some exercise, but as I rarely get the opportunity to not have to waddle around after dinner, I take it when I can.

I loathe saggy crust. It's like dipping bread into water so it gets all spongy, then eating it. Except instead of water it's usually tomato sauce. Still.

Once, at a great pizza joint, I had their Italian doughnuts in a mound of confectioners' sugar. The problem was that they used pizza dough to make the doughnuts whose real name began with a 'Z', so it was chewy, dense, and weird. I imagine that's what your dessert calzone was like. :(

The tip sag didn't bother me as much.

My GOD! Look at my ham hocks. At least the ring looks good. Sorry I ruined your photo! Tell me to get out of the way next time.

As for the calzone, I agree, it is not worth going out of your way for, and the ends are way too bready for my taste. I rather liked the nutella and marscapone grilled dough at Coals in the Bronx, but the pizza at Toby's was better.

The Tartufata was very earthy (ohhh-mah-mee), and VERY rich. I didn't mind the TIP SAG at all, I could have had another whole Tartufata, as well as another hefeweizen (as big as it was).

LOVE YOUR WEBSITE! I just recently have gone back through your archives and have read EVERY single one!!!!

That cartoon has T-Shirt written all over it.

The pizzas look so delicious! I wonder if substituting the ricotta with mascarpone or custard would have improved the dessert?

Christina: Oh, the dessert calzone wasn't chewy! The bread was soft and fluffy-like. :) Maybe if it had been deep fried it would've been different...although awesomer...

You didn't ruin the photo; you ARE the photo! Haha.

Ah yes, you ate the end pieces! ...Bread. I like bread, but by that point my stomach was too fat to eat more.

Melissa: Every one? EVERY ENTRY? Daamn. I'm impressed and hope you didn't fall asleep in a puddle of your own drool at any point. :D

Ms. Blake: Omg, custard. Custard and Nutella, that would be good.

Ooo Nutella. I want to smear it all over myself, but then you'd get all freaked out and ban me from your blog. So I won't. I'll just be THINKING IT.

Jesse: It's okay to think that! I AM NOT WEIRDED OUT AT ALL!

So off topic, but it has to do with food! Eh.
Out of curiosity, have you had samgyeupsal?
I know you like pork. I know you like Korean food. I tried to dig my way through the search function but to no avail.
And what's better than grilled pork belly?

Heehee, I love the tagline for that blob! Here's a filipino (colloquial) phrase for you which translates to what the blobby was saying "laglag panty" - anything that makes the drawers hit the floor. Usually associated with appreciating some gorgeous man, but nutella calzones would be on my list!

The pizza looks amazing, but the saggy bit makes me question their true value. This might be mostly because I just had a pizza so saggy in the middle that it was more akin to bread soup than pizza. Hm, it's just so darn hard to get good Italian style pizza here. Maybe you could do something about that? :)

Mila: LAGLAG PANTY! That sounds awesome. I want to say that all day.

Hillary: It's my fave too!

Oh yes,, you want it. It's basically bacon (well, the pork belly part) but it's uncured, and they bring it out to you and you cook it on the table grill like galbi. It's fatty, delicious, and melts in your mouth. Plus the 20 panchan side dishes are always good and free refills! And if they do it right, they'll serve it with sam (lettuce leaves) and gochujang (the spicey red paste).

I've been to Ham Ji Bak in Flushing, and it's pretty good. And Kunjip, I think on 32nd.
I'm sure there are plenty of places in Flushing and K-town in Manhattan that'll serve it. Basically look for any place with galbi. But make sure you take a few friends to share with, they don't usually like to fire up the grill for only one order.
It'll say 'sam gyup sal' or 'sam kyup sal' or some crazy Anglicization like that.

Are you sure it wasn't a Buffalo that sat on the pizza?

Lots of deliciousness...and that crust tells me that the pizza is browned. Which means its good.

Calzone is one of my favorite dishes I love it but there aren't many delicious place to go like this it is unique.