Note: I currently live in Norway. I lived in Taipei from August 2014 to June 2015 and am veeerrrryy sloooowly writing posts about my time there. 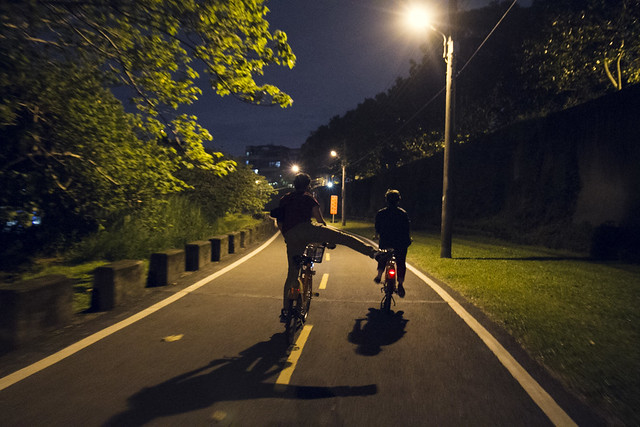 Do you like drinking? Dancing? Karaoke? Being smushed into dark, noisy enclosed spaces with strangers? Spending money doing the aforementioned activities? Did your face contort into a series of exponentially more horrified looks after you read each of the preceding questions? If so, then [smack] HIGH FIVE [/smack], we might be on the same page when it comes to favorite forms of nightlife entertainment. A page from the book, Cosmopolitan Living: How Not To.

Thankfully, Taipei has plenty of fun things to do at night for those averse to bars, KTVs, clubs, and spending more than NT$200 (that's about US$6) in one go. You can hang out in one of many cafes (well, one that's open late). You can walk around one one of many parks. You can go on a snack crawl through one of many night markets. And if all else fails, you can always rely on one of a million 7-Elevens. It's always open. Always watching. 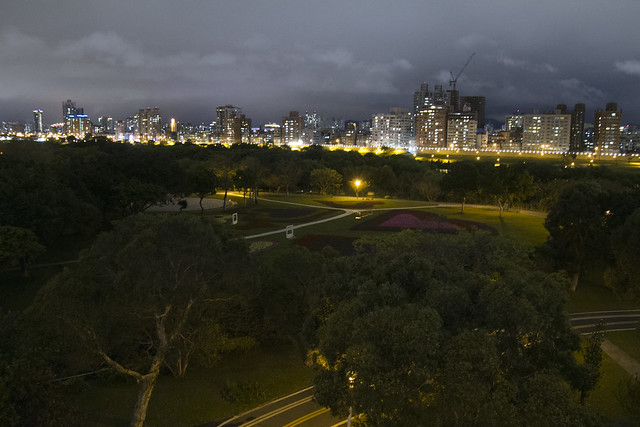 But my favorite cheap thing to do in Taipei at night is to go bike riding with friends along Xindian River. The Greater Taipei Area has over 100 kilometers of riverside park paths reserved for bicyclists and pedestrians. (You can download maps at travel.taipei.) If you don't have a bike, it's easy and cheap to rent a YouBike for a night. I much prefer riding at night than during the day. The main problem with day is the sun. Day is when the sun comes out and melts brain cells. Because the sun is very hot. (I took an astronomy class once—I know what's up with the sun.) Night is a much better time to go out, when the air is cooler, the neighboring lights of New Taipei City dot the skyline and glimmer in the river, and there are waaaay fewer people to hear me belting out off-tune Disney songs, which is a thing you might want to do when you're bicycling maybe I dunno "WHOOOO IS THAT GIRL I SEEEEEE?".

My favorite place to enter the riverside park is from Hakka Cultural Park near the south end of Shida Road. There you'll find a YouBike station next to a bike path that takes you up over a small bridge with a scenic platform. Keep going down the ramp and it drops you into a wide open section of the park with little else besides grass, trees, and paved road. I have no problem living in cramped city quarters, but as soon as I cross the threshold between ramp and park, I feel a burst of blissful freedom that I didn't know I was missing. "Ohh, this is what nature smells like. Mmmmm. Chlorophyll. Lack of exhaust fumes."

Here are some sights along the bike path if you go west: 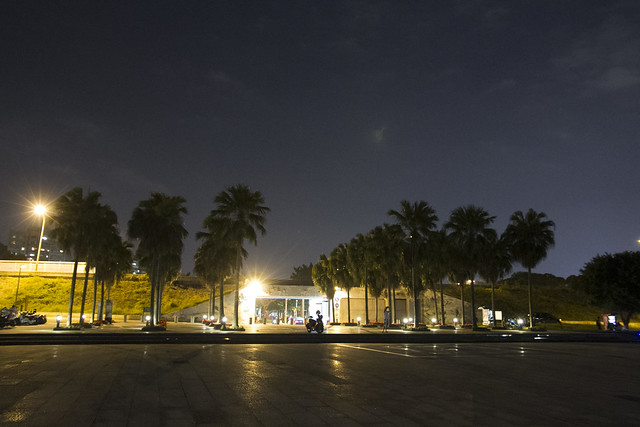 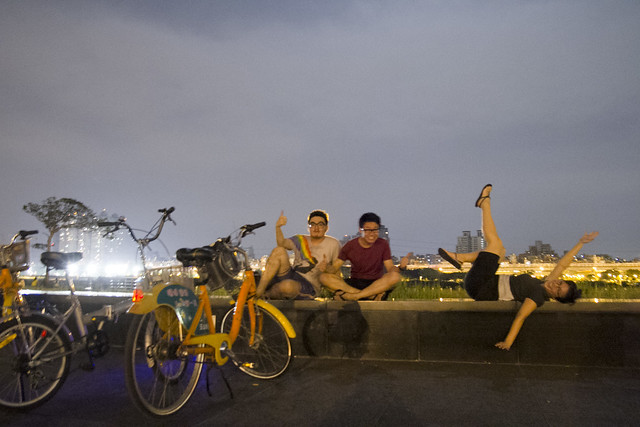 Machangding Memorial Park was originally a military training area during the Japanese occupation, then after the Japanese left and Taiwan was put under martial law, the government used it as an execution site. 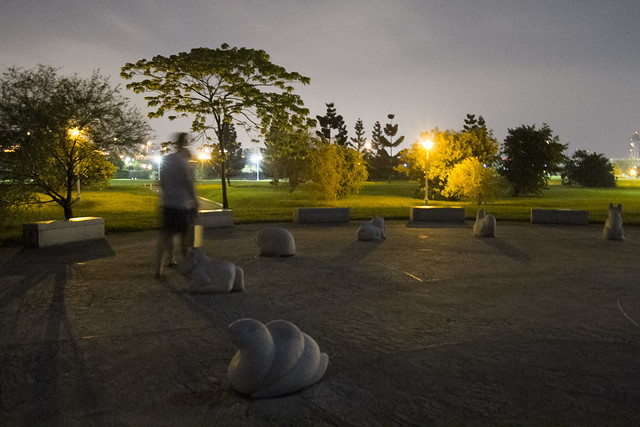 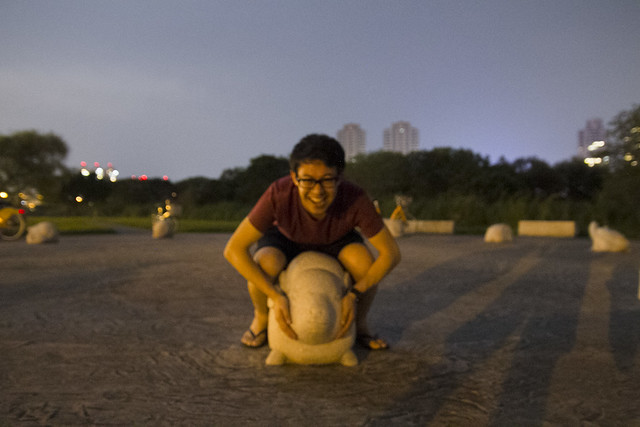 Somewhere a little north of Huacui Bridge is this tiny clearing with adorably chubby lil' Chinese zodiac statues. I tried to find it on a map, but I don't remember exactly where it is. FIND IT FOR ME, PLZ. 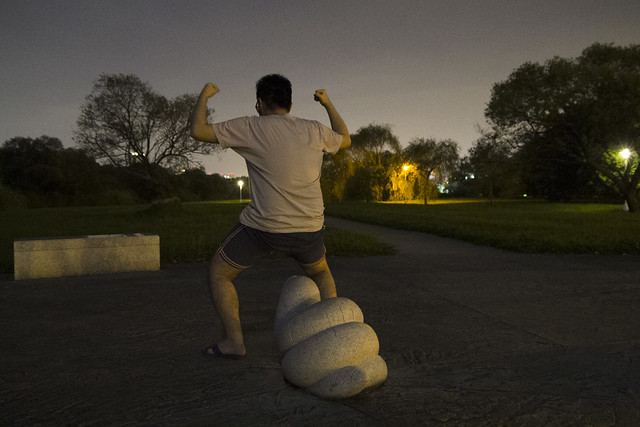 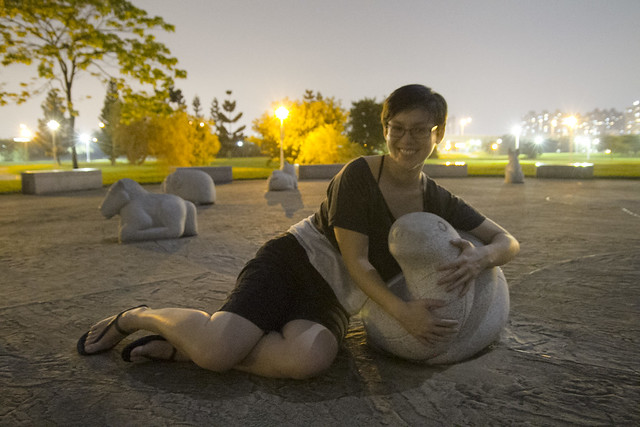 After we pretended to poop it, Charlotte decided to give the snake back some of its dignity.

We may have spent too long taking photos with the snack statue because it looked like a giant pile of poop. We can't be the first people who've done this, right? ...

Here are some sights along the bike path if you go east: 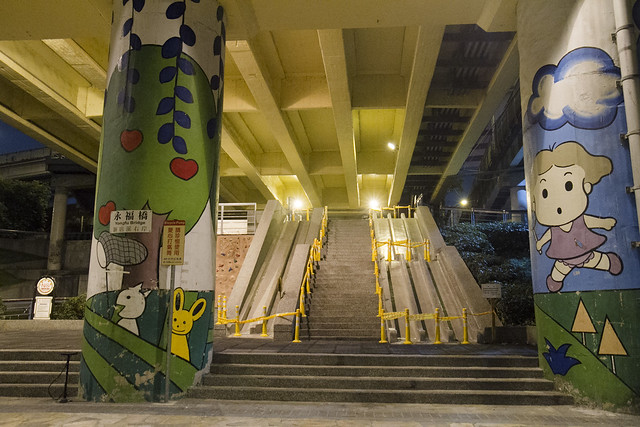 Under Yongfu Bridge you'll find these awesome death slides. "Death Slides" is not the real name, probably. The cute paintings on the support columns scream, "HEY KIDS, THIS FUN PLAY AREA IS JUST FOR YOU, PUT YOUR FEARS ASIDE, COME ON IN!!!" and yet the yellow warning tape around the slides screams, "HEY KIDS, WE WERE WRONG, WE BUILT THESE THINGS WAY TOO TALL, FOR THE LOVE OF GOD, RETREAT!!!"

The tape does little to kept you from using the slides, though. Besides, if you're an adult, you can do anything you want! Remember that, kids! 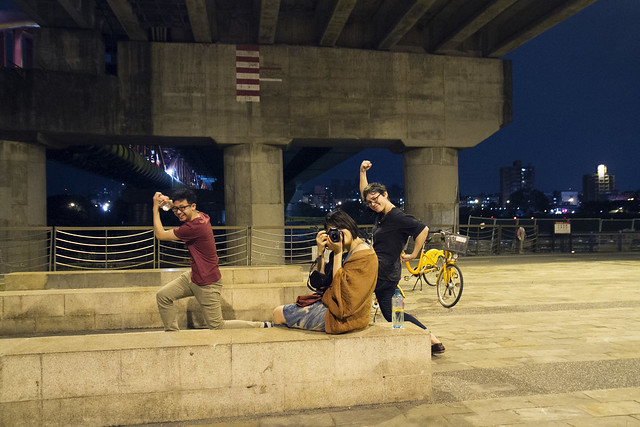 Xiangtai, Ziying, and Charlotte: "WE ARE READY FOR THE SLIDE!" 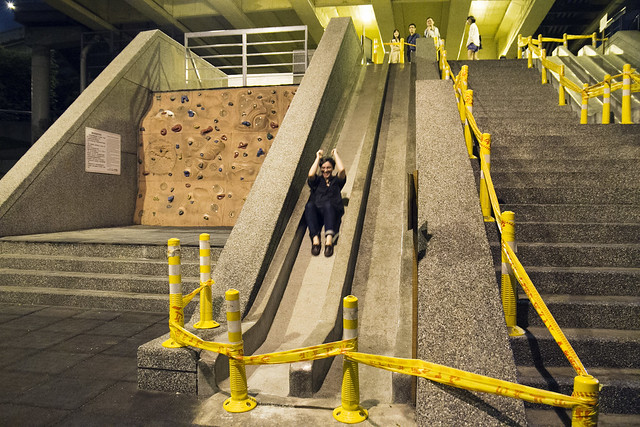 CHARLOTTE IS LIVIN' LIFE ON THE EDGE!

I only went down the slide once. I'm still learning how to live life on the edge. 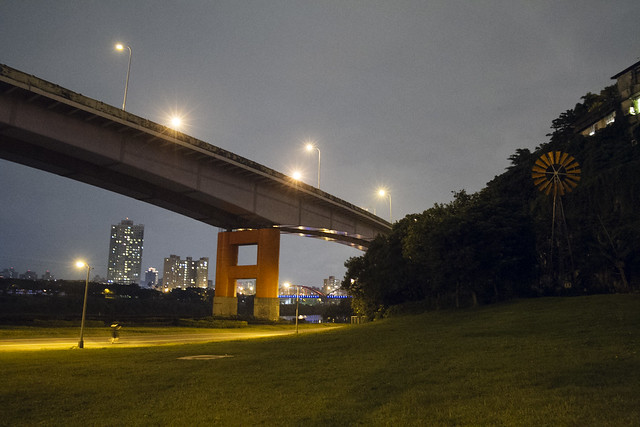 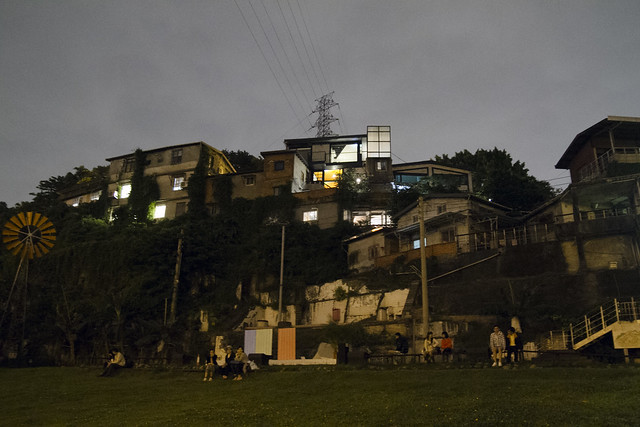 A little farther south is a clearing where a cluster of Treasure Hill's jumbled buildings jut out and look all cute and stuff. 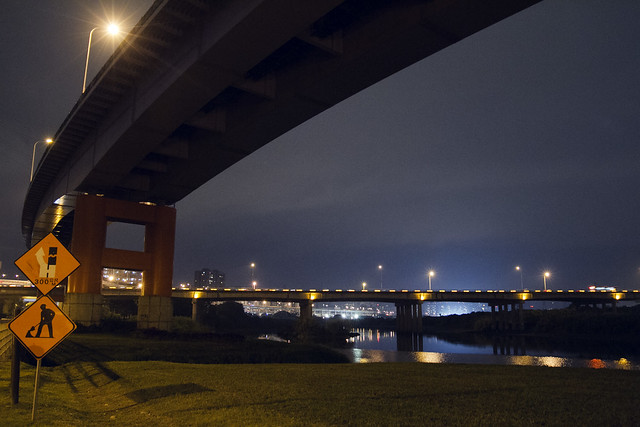 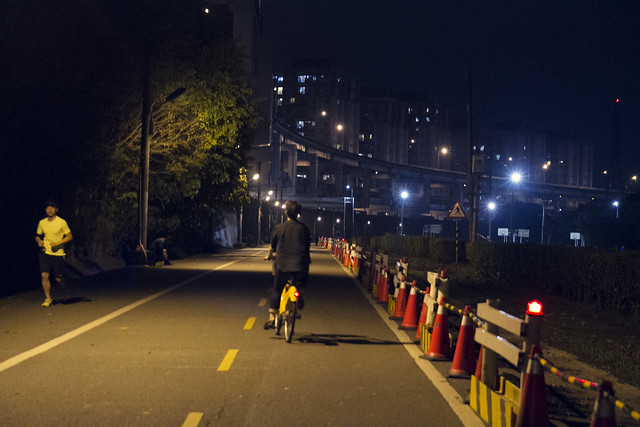 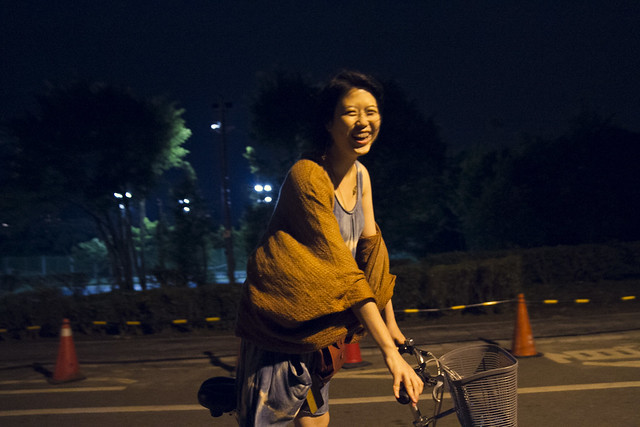 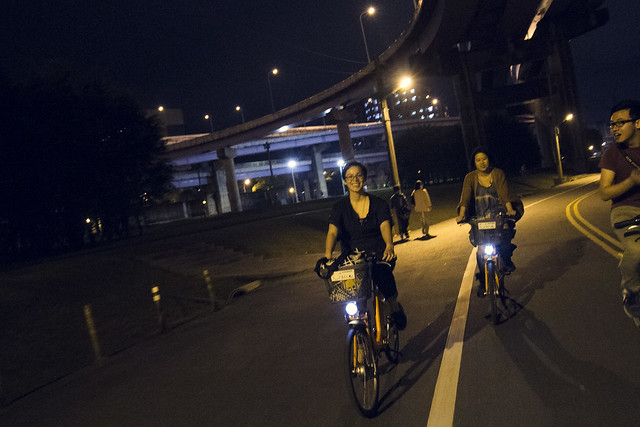 After all that biking, you should treat yourself with something cheap and fatty and salty. Like Taiwanese breakfast. Taiwanese breakfast shops are generally either open during super late/early hours or 24-hours a day. Midnight snack, here we come. 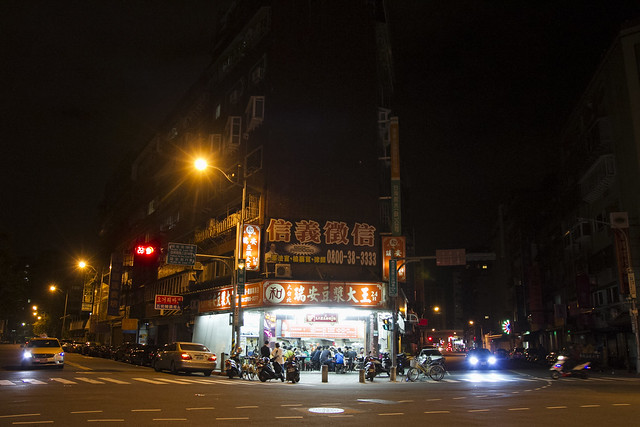 PIERCING FLUORESCENT GLOW, BEACON OF BREAKFAST, TAKE ME [hurls self at restaurant].

Although my go-to breakfast spot is Yong He Dou Jiang Da Wang, I prefer the more spacious, open-air setting at nearby Rui'an Doujiang Da Wang. The food quality may not be as good, but it's good enough as well as cheaper. It takes maybe 15 minutes to bike there from Hakka Cultural Park. 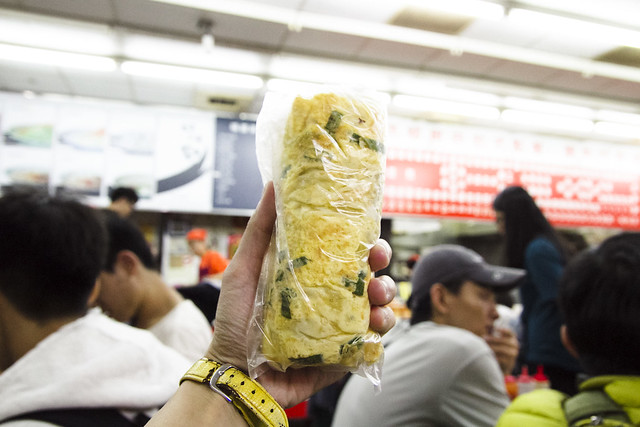 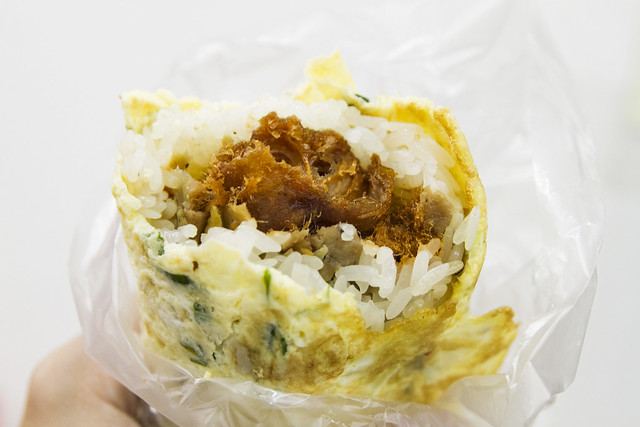 My favorite thing to get: egg-wrapped fantuan. It's like a Taiwanese breakfast burrito...but instead of beans/cheese/onion/bacon/etc. it's stuffed with chopped pickled vegetables and pork floss packed around a crunchy stick of fried bread that oozes oil with every bite...and instead of long-grain rice it's bound with sticky rice...and instead of a tortilla it's wrapped in a green onion-speckled omelet. ...So...not a burrito. But it's similarly a gut-bomb of a log-food. AND IT ONLY COSTS NT$35 (that's about US$1). I love it dearly. Wash it down with a cup of cold soymilk. Does a body good. Maybe not from a health-standpoint, but some other one. 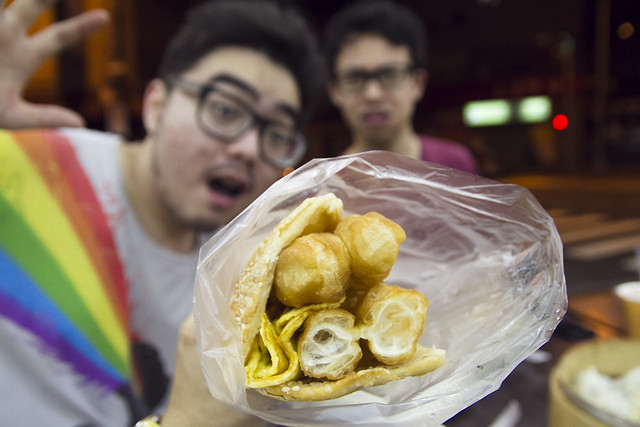 If a log of sticky rice sounds too heavy for you, try a shaobing youtiao with egg. It's a sandwich made of flaky sesame seed-crusted flatbread stuffed with an omelette and the aforementioned deep-fried, oil-oozing bread stick. A carb sandwich with a hint of egg. Yeah. ...That's lighter than fantuan, right? Sort of.

A+ NIGHT OVER. [Drops Cosmopolitan Living: How Not To into a flaming oil drum.]