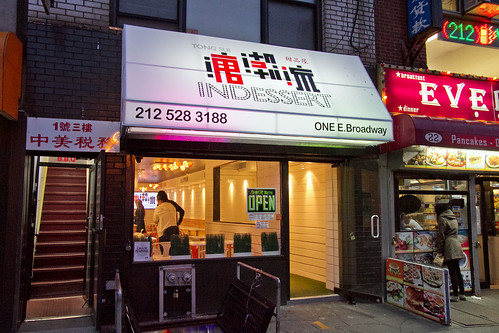 You know that feeling you get when you're lost at sea for days, and you can feel your innards shriveling up as the life drains out of your malnourished body, and you've held out on killing your shipmate and eating him because he's one of your most loyal and trustworthy friends, but, hm, on second thought, he's looking pretty beefy and surely doesn't need all that thigh muscle? And just as you're about to go in for the kill with your bare, adrenaline-powered hands, you see a light in the distance. A beacon of hope that says, "Cannibalism, you'll just have to wait." You've found civilization. You're saved.

That's sort of how I felt when I first came across Indessert. Without the starvation and hopelessness and deranged lust for flesh, but with the rapturous excitement that great things I hadn't expected were coming my way, accompanied by internally screeching, "OMG OMG YAY!!!@#!@" repeatedly. I was just really happy Chinatown finally had a dessert shop. So happy that I've been to Indessert nine times since it opened in March (and two of those visits happened last week). 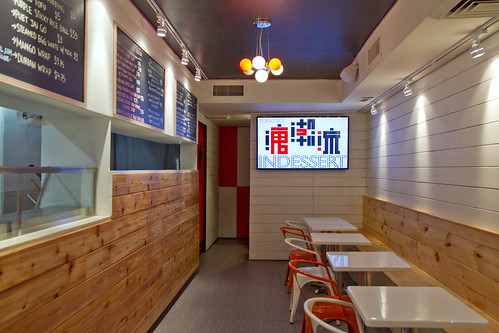 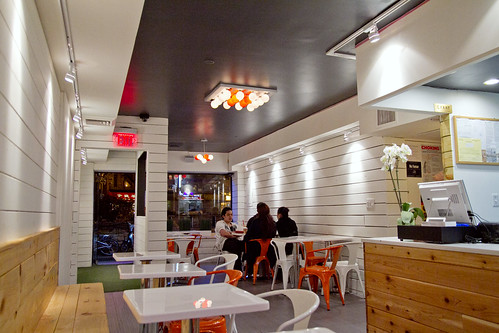 What's so great about Indessert? Let me count the ways:

Originally I had planned on rating every dessert I've eaten so far at Indessert, but after chatting with one of the co-owners, I didn't think that'd make for a fair review. Some of the desserts I ate months ago have since been tweaked. I'd assume they're hitting their groove now after being open for five months, but the tweaks continue; a few weeks ago they made a huge update to their menu.

Here are my favorite dishes so far. I'm not a tong sui expert by any means, so if you have others you'd recommend, let me know! 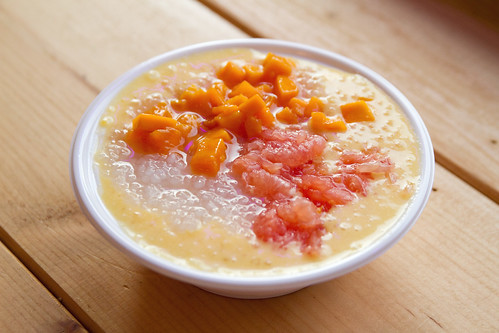 Indessert's signature mango pomelo sago soup ($5.75) is my favorite thing on the menu. It's intensely fruity—like "someone punched my face with a mango" fruity—sweet, creamy, chilled mango purée sweetened with rock sugar and fortified with heavy cream, topped with ripe mango cubes, plump sweet-tart pomelo segments (or grapefruit in the current pomelo off-season), and loads of tiny soft and chewy sago pearls. "Fruit soup" may not bring to mind a belly-filling dish, but it's substantial without feeling heavy. I recently tried the version from Mango Mango and didn't like it as much. It wasn't bad, but it didn't taste as fruity. 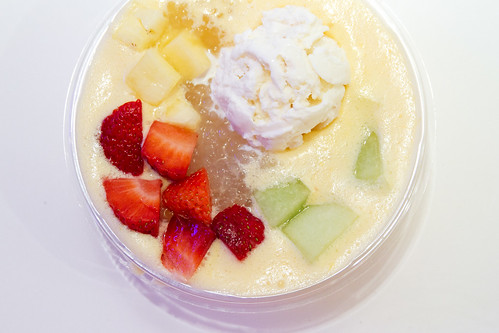 If you're a mango/pomelo/sago hater [cue rolling of tear down cheek], you can customize your own dessert soup ($5.75) starting with a base of mango soup or sweet coconut milk (actually coconut milk mixed with coconut ice cream and heavy cream, which means it's tasty, fatty stuff) and adding in whatever combination of ice cream, fruit, and chewables (sago, tapioca, grass jelly, aloe, tofu pudding) you want. Ice cream seems like it should be a good idea, but most of their ice cream from Chinatown Ice Cream Factory, which is great if you like your ice cream airy and icy, and bad if you have any respect for the art of churned frozen desserts (whoops, got a bit sassy there). 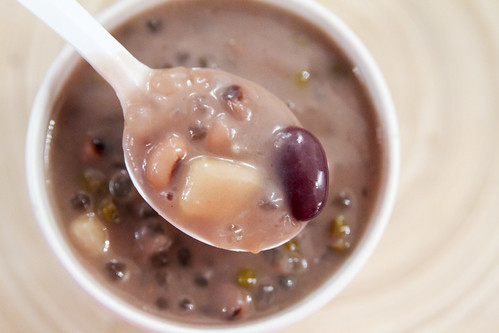 My next favorite dessert is muo muo cha cha ($4.25), a sort of hot, sweet, coconut milk-based stew heartily packed with taro chunks, sago, mung beans, red beans, and kidney beans. It's starch upon starch. I don't know how appealing this would be to someone who didn't grow up eating Chinese, bean-heavy dessert soups, but as someone who did, I find the combination comforting. 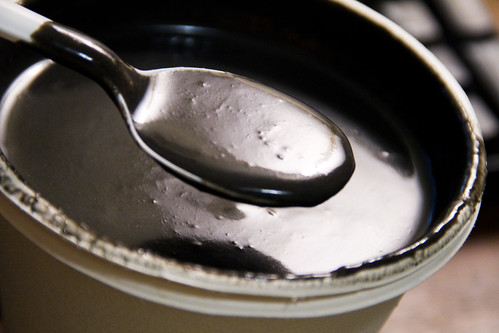 if you love black sesame and want the test the limits of your love, try the classic tong sui dish black sesame paste soup ($3.95). It's just black sesame, rice, and sugar. Indessert grinds black sesame seeds daily and mixes it with rice flour, also ground in-house, and rock sugar. One of the co-owners told me there's no added liquid, which blows my mind since that means there is roughly a metric shitton of black sesame in every serving. It pretty much tastes like what it's called: a thick, rich soup that coats your innards in sweet, nutty black sesame goodness, goodness that is a bit too intense for me to want to eat more than a few spoonfuls of. My ideal time to eat this would be in the dead of winter, as long as I could share it with two or three other people.

I've tried black sesame paste soup a few times between here and Hong Kong, and even though I like it—I like anything that's black sesame-flavored—it quickly leads me to palate fatigue. I took this dessert to go and I could only finish half of it after two days. Next time I'm in the mood for a nutty soup I'll try the Yin-Yang paste soup ($4.25), which is half black sesame tempered by half almond paste, or the black sesame and red bean ($4.25). If you're a black sesame paste soup aficionado, let me know what you think of Indessert's version. 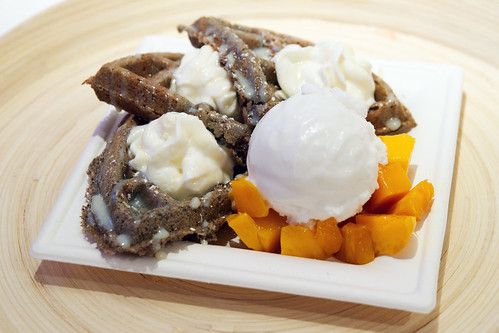 Unfortunately, Indessert doesn't make other black sesame-flavored desserts that aren't semi-liquid, aside from almond tofu pudding accompanied by black sesame paste. They used to make black sesame waffles, but demand wasn't high enough to keep them on the menu, unlike green tea waffles and coconut waffles, which are still available. It's too bad; I would've ordered them again. Aside from the black sesame flavor, it didn't hurt that they were drizzled in condensed milk and topped with whipped cream. 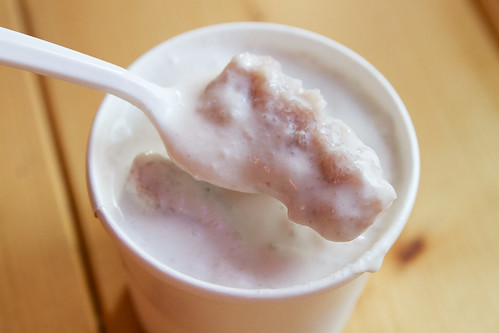 Taro coconut milk and sago soup ($3.95) is pretty self-explanatory. It's a coconut milk-based soup with lots of sago and big chunks of taro—three ingredients I quite like, all in one package. My only complaint is that I wish it were a bit sweeter. 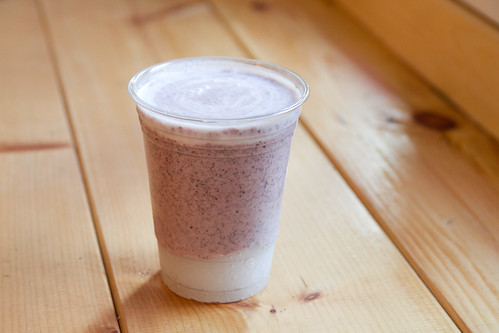 Purple Rain ($4.25) features black sticky rice blended with coconut milk, with sago at the bottom—again, three of my favorite ingredients combined. Although it's listed under the "Drinks" category, it's more rice pudding than beverage, with a texture akin to an extra-thick milkshake but chunkier. A cup of this stuff is a hell of a lot for one person; I'd suggest sharing it. 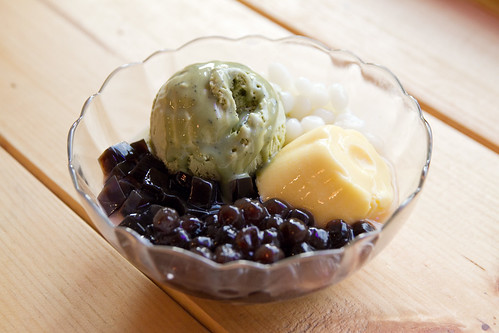 Indessert's grass jelly bowls ($6.50) are sort of like shaved ice bowls without the shaved ice. (Indessert also makes shaved ice, which I have yet to try.) So...they're like bowls of toppings, toppings including red bean, taro, sweet potato, black sticky rice, almond tofu pudding, and more. I'm down with that. The bowl above contains grass jelly cubes, tapioca pearls, mochi, caramel flan custard, green tea ice cream, and milk tea, a nice mix of chewy, creamy, and Jell-O-like. I'm not sure I'd get this particular bowl again, but I'd definitely try another one of the six choices.

Indessert does good business on weekends, but I've been told that weekdays are slow in a not so sustainable way. Please visit Indessert during the week so I may selfishly retain it as my go-to dessert spot.

To cap off this post, a random note about my lack of productivity: Although you probably can't tell that I've been less productive than usual, because my base level of blogging is "Level 1.5: subject doesn't show signs of life until it is gently poked with a stick, at which point it engages in light twitching," on my end I know I've been, and will continue to be, less productive because TV. Or rather, Netflix. My brother recently upgraded his Netflix account to a family plan so my mom and I could imprison ourselves with endless streams of TV shows and movies revel in the joys of this semi-modern marvel of on-demand entertainment. And thus a few weeks ago I started watching Battlestar Galactica. Surely you can predict where this is going. I've seen the Portlandia skit. I knew it would take me down a dark path of butt-numbing, back-to-back-to-back (...to-back) episodes—what's another 40 minutes of my life? I don't need that for sleeping or anything. Oh no this episode is 90 minutes long? Ok!—but I did it anyway. Because it's streaming on Netflix! How could I resist?! I am weak. The end.

Update (9/1/13): I finished Battlestar Galactica! ...A few days ago. Yeah. That ending. I see what y'all were talking about.

Do they also have peanut soup? I love that :)

LOVEd this post. As a non-Asian it is difficult to comprehend the concept of rich bean and fruit soups for dessert, but so fun to try, lol. Scandinavia is also into fruit soups I think, but the jelly's and beans, sago, sesame and taro are really unique additions, from a Western perspective..

I think these soups need more exposure, like an introduction on SeriousEats - maybe even in a whole new dept. called SeriousEast, lol. And hey, you're welcome!, if that works out...It would be good to hear about these super regional desserts and other dishes that might otherwise become lost, but shouldn't because they're delicious and fun.

Hey Robyn. I remember craving good black sesame drink a few years back after coming back from China where you could find them everywhere. I would be sure to check this place out :)
I'm thinking about going to Iceland for a few days in February and was wondering do you have any advice on staying there and what places I should absolutely visit? Thanks!

Would you say the sugar level is average because I don't like overly sweet desserts. Do they serve cold tong siu? While it's best to eat hot sweet soup, I always scorch my tongue and learned that cold is better for me. :) I love black sesame soup. I would take your leftover. :)

Didi: No peanut soup I'm afraid, but I like that stuff too!

Seashine: Glad you like the post! I was also thinking it'd be nice to have a style guide to these kinds of desserts. If I weren't Chinese I doubt I'd know much about 'em. Even being Chinese, I don't know much about them. ;_; I'm not qualified to write a style guide yet; I guess I have to do more research. With my mouth.

Anna: Good thing I wrote a whole bunch of posts about Iceland! :) See em all here. I had a lovely stay at Room with a View. As for places to visit, it depends what you're interested in? At the very least, I'd think most people visit the Blue Lagoon. I loved visiting Jökulsárlón and seeing lots of pretty stuff along the way, but it's a long-ass drive from Reykjavik, assuming you're staying there.

Kim: I'd say the sweetness was average or below average. Nothing tasted too sweet to me, but some things tasted not sweet enough. Some of the tong sui are cold (mango pomelo sago, taro coconut milk and sago, black sticky rice with coconut milk, probably others I haven't tried yet). You can always take the black sesame soup home and chill it? :)

YAY!!! My friends have been looking for good mango pomelo sago soup since their days in Hong Kong. I am so passing this post along to them and hope InDessert is as good as what they had in Hong Kong. Personally, I'm sad they don't make sesame waffles anymore. I love black sesame and waffles so the combo would have blown my mind. Guess i'll have to make it at home. Can't wait to try this place. Thanks for the rec! :)

Winnie: Let me know if you try it! I'd also like to know how it compares to stuff in HK. I didn't eat enough dessert in HK...[sob]...

Jason: We should eat it togetherrrr!

haha battlestar galactica is awesome! who needs sleep when you have cylons to watch!

chocolatesuze: After I finished watching Battlestar I blazed through Caprica in less than a week. Which didn't exactly fill the void, but it was better than nothing. ...Sigh. I NEED MORE BATTLESTAR.

Nicholas: I can go whenever!

watch those BBC shows on Netflix streaming! Luther. The Fall. Top of the Lake.